Now we're into the proper launch of the DC Animated Movie UniverseWhile DC Comics was amping up production on this big "MCU-killer", the DC Extended Universe they were also quietly putting together another shared movie continuity, the DC Animated Movie Universe. This series was more closely related to the comics, directly adapting a number of famous storylines to, arguably, better effect than the live-action movies could.. In the same way that Flashpoint kicked off the The New 52, a new normal in DC comics where just about every hero saw a massive reboot, 2013's Justice League: The Flashpoint Paradox kicked off a new continuity for DC Animated Movies, starting with Justice League: War. While I can appreciate DC wanting to launch a new, unified animated movie continuity, one where long-form storytelling can be performed over the course of a series, this whole endeavor started off kind of weird. You know, just like DC's other film continuity, the DC Extended UniverseStarted as DC Comics' answer to the MCU, the early films in the franchise stumbled out of the gates, often mired in grim-dark storytelling and the rushed need to get this franchise started. Eventually, though, the films began to even out, becoming better as they went along. Still, this franchise has a long way to go before it's true completion for Marvel's universe.. 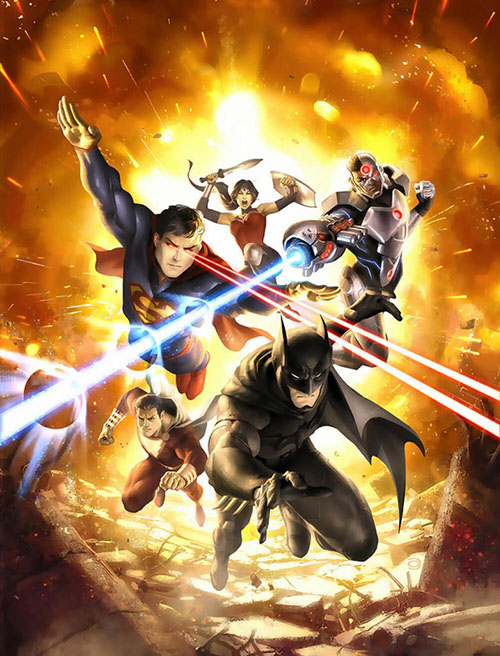 As noted in my review, The Flashpoint Paradox gave us a spin on Barry Allen traveling to a different version of his continuity, one where everything was out-of-whack from how he remembered it. Barry had to try and fix whatever had changed the time line (spoiler, it was all Barry's fault to begin with) and, in the course of doing this, some things were permanently changed (even thought most of continuity was reset). While an interesting idea for a movie, the DC animated films had been a lose collection of movies with no through-line continuity. Having Barry wake up in a reality he doesn't recognize didn't really have weight for us since this was the first film with this version of Barry we'd ever seen and we weren't exactly attached to him, is old continuity, or the new one. Hard for us to feel for him from that perspective, and it's not exactly easy for us to know what's changed once everything is "reset" back to normal.

But then we have War which is supposed to spin out of Flashpoint (a tag ending at the end of the preceding movie showed that Darkseid, major DC ComicsOne of the two biggest comic publishing companies in the world (and, depending on what big events are going on, the number one company), DC Comics is the home of Superman, Batman, Wonder Woman, and just about every big superhero introduced in the 1930s and 1940s. villain, was coming to invade Earth), but shared absolutely no continuity with the previous film. At the end of Flashpoint we see Flash and Batman hanging out in the Batcave, but here the two heroes don't know each other at all. It doesn't make much sense when you try to view the film as two connected entities in a complete series.

If we ignore Flashpoint though, it's pretty easy to enjoy War for its own charms. The film picks up at the start of the modern Age of Heroes. Essentially each of the major heroes of the DCAMU -- Superman (Alan Tudyk), Batman (Jason O'Mara), Wonder Woman (Michelle Monaghan), Hal Jordan (Justin Kirk), Barry Allen (Christopher Gorham), Cyborg (Shemar Moore), and Shazam (Sean Astin as an adult, Zach Callison as a kid) -- are near the beginnings of their careers protecting the world. After getting introduced to each of them as they, separately, find strange alien tech (so called "Mother Boxes") and fight strange, winged aliens (Parademons), the heroes all end up coming together to taken on a big threat: Darkseid and his army. Darkseid wants to conquer the Earth and the only people capable of stopping him are these seven heroes. The rest of the movie is one long fight as the team battles Darkseid for control of the planet.

Depending on what you're looking for from your superhero movies, Justice League: War is either a total chore or a complete success. The film isn't heavy on story, getting all the introductions and major character beats out of the way early so we can get to the big fight sequences. Past the opening act there isn't a lot of downtime so character beats happen in between the punching and hitting. Plenty of viewers will want more story, more time with the characters, all so we can learn about these versions of the characters and what makes them special. War doesn't provide much of that so if you're unfamiliar with any of these characters, you're not going to have a great time following this adventure. 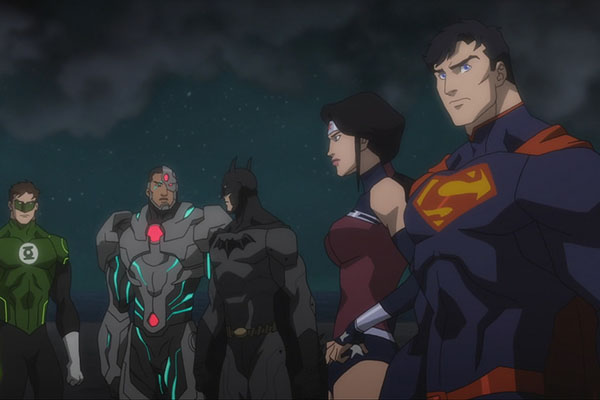 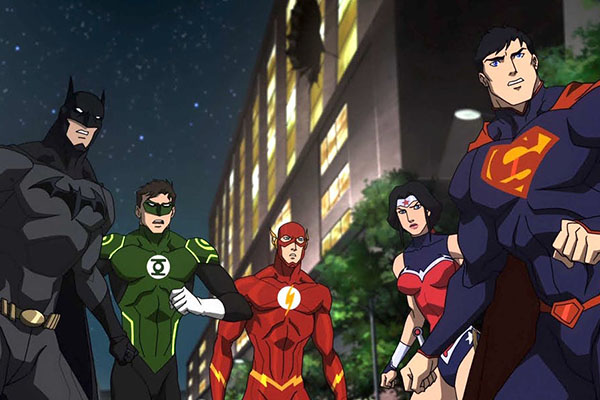 For instance, if you haven't read enough of DC Comics to know how Darkseid is, this movie isn't going to help you out at all there. You get an idea that he's a bad dude, one who is very powerful and has a huge army of winged beasts behind him. But beyond that, who he is and what his motivations are, all of it is left out of the movie. He's not a villain you can bond with, not one you're going to learn about so you can understand his perspective. He's a dues ex machina, a guy called in so the team can fight him and learn to work together. Without the knowledge of comics history, he's just some big, bad dude.

That said, the movie rightly assumes we know enough about Batman, Superman, Wonder Woman, Green Lantern, and the Flash that we don't need a huge explanation for any of them. Small character moments with each of these heroes explain just enough to shade in their characters, but we can appreciate them just with their powers and their banter simply because they're already famous. The two heroes people might not know, Cyborg and Shazam, are given a little more breathing room. Each have longer character moments to introduce viewers to the characters. Cyborg in particular gets a lot of time on screen, with much of the first act of the film serving as his origin story.

That's good, too, because each version of his origin I see if very different (this movie has a different one from Doom Patrol, which was different from his origin in Young Justice and also from the one in Justice League (2017). The only commonalities seem to be that he was a football player, somehow he gets injured, and his father fixes him with some kind of cybernetic enhancements, making Cyborg into a hero in the process). If any of the characters needed more time spent on them, it was Cyborg.

The moments between the characters are really what drives this movie. Although the film essentially becomes a two-act action sequence once Darkseid shows up, we never lose sight of the characters in all the chaos. This film continuously brings the characters together for some quick banter and a few laughs, keeping everything just light enough that it never feels like a dour slog (unlike, say, the Snyder-directed films from the DCEU). This film clearly paid attention to the good work being done over in the Marvel Cinematic UniverseWhen it first began in 2008 with a little film called Iron Man no one suspected the empire that would follow. Superhero movies in the past, especially those not featuring either Batman or Superman, were usually terrible. And yet, Iron Man would lead to a long series of successful films, launching the most successful cinema brand in history: the Marvel Cinematic Universe. and learned from that example. The characters are fun and witty and even in the darkest moments there's still time for at least a smile. They're heroes you can actually enjoy. 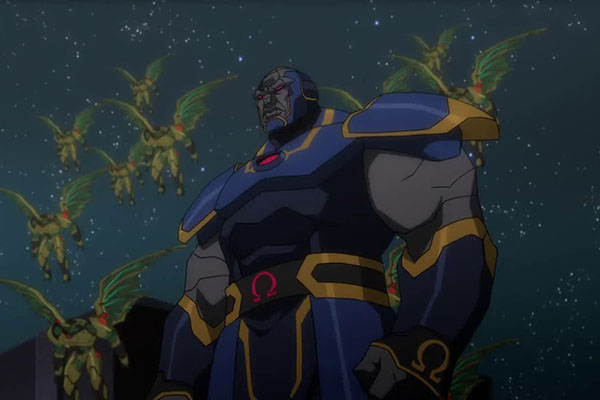 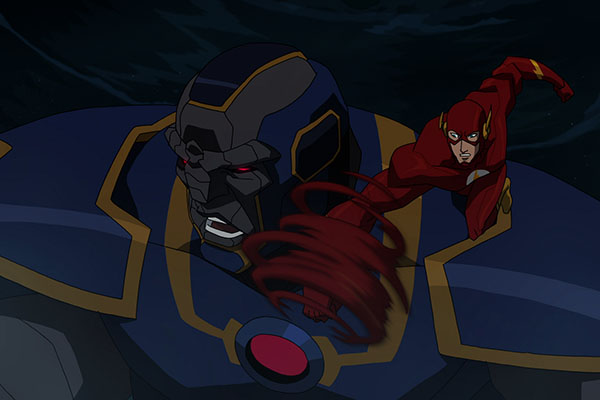 This film actually serves as an interesting counter point to the 2017 Justice League. While both films tackle the same subject -- the eventual invasion of Earth by Darkseid and his minions -- they come at the topic from two very different perspectives. That's in part because one of the films had a terrible continuity (DCEU) that it had to try and gently massage into an enjoyable movie while this one, War was fresh off a reboot and could do whatever it wanted. From that perspective I can understand why DC elected to reboot their continuity with Flashpoint since, freed of constraints, they were able to craft a version of the Darkseid tale that could stand on its own without any previous expectations or baggage.

Does it work? For the most part, yes. The heroes are great and I like the growing sense of teamwork between them as the battle goes on. The weakest part really is Darkseid, and in that regard the lack of build up for the character, the fact that there's no previous continuity to feed him, is what hurts his role in the proceedings. He could have been any major villain and the basic elements of the story would have been the same, and that's the major issue: Darkseid isn't any major villain. He's essentially a god (or, at least, has the powers of one) but he doesn't really get his due in this film. More time spent on his character, here or in a previous film, could have helped this beefy villain have more weight to his story.

Still, this is one of DC's better attempts at Darkseid in film. Even if the villain himself doesn't really stick his landing, the carnage he causes, and the stakes for the heroes, are very real. As a film that has to introduce a new version of this team, get them all together, and get us behind their cause, Justice League: War works nicely. it may leave me wishing for a better version of Darkseid, but when it comes to the heroes I have no complaints.

And, thankfully, we'll be spending plenty of time with these guys in the movies to come...