I Guess We're Sticking With the Doom Patrol

It's a pretty quiet week on the ArrowverseWhen it was announced that the CW was creating a show based on the Green Arrow, people laughed. The CW? Really? Was it going to be teen-oriented like everything else on the network and be called "Arrow High"? And yet that one show, Arrow has spawned three spin-offs, various related shows and given DC a successful shared universe, the Arrowverse on TV and streaming. front. All the main shows are off this week which leaves Doom Patrol as the only show actively running right now. Obviously we're going to look at that show, but if you're wanting a longer Arrowverse report for the week, we suggest you look over at the 2015/2016 Crossovers article we're posting today as well.

Everything should resume their normal schedules next week and then, hopefully, we can make it to the end of the seasons without another long break. Here's hoping!

At the end of the last episode the villain (and ever-present narrator), Mr. Nobody, had just sucked the near-by town, and the Doom Patrol's leader Chief, into a dimensional rift. Crazy Jane immediately dives into the pit as well to try and find Chief, and then the rift closes behind her. This leaves Cliff (Robotman), Rita (Elasti-Woman), and Larry (Negative Man) as the only survivors of the destroyed town. Oh, and there's a donkey that farts messages from the evil villain lurking around, too.

While Larry and Rita head back to the manor to regroup (and try to get back to their normal life under the assumption that Chief has been in bad scrapes before and has always survived so, clearly, he'll make it out of this one, too), Robotman sticks around the ravaged town, attempting to capture the donkey. That's when a new hero steps into the picture: Vic Stone / Cyborg (Jolvan Wade). Vic was, at one point, a star high school football player until an accident left him mangled (and his mother dead). His father, a cutting-edge scientist, rebuilt his son with cybernetic parts and, over the months since, has encouraged (pushed, really) his son to become a superhero. With Cyborg's help the donkey is captures and the two heroes take it back to Doom Manor.

Oh, the the donkey barfs up Crazy Jane. It seems the donkey is more than just a farting mammal, it's also a dimensional entryway into whatever realm Mr. Nobody sucked the town. Cliff sticks around to help Jane while Larry, Vic, and Rita check out the donkey and are subsequently sucked into the dimensional vortex. And inside that vortex they have to play Mr. Nobody's games if they hope to escape with their lives.

After how weird last episode was, it's nice to see that Doom Patrol isn't slacking on that account. Having the donkey be a dimensional vortex was an interesting twist, and it's just one of a number of little jokes, tweaks, and gags the show used this episode to keep the heroes (and the viewers) on their toes. This kind of twist reminds me of role playing adventures I used to run, games where I could throw anything against the wall, no matter how weird, just to see where the journey would take us. Doom Patrol has that same vibe and, so far, it's working. 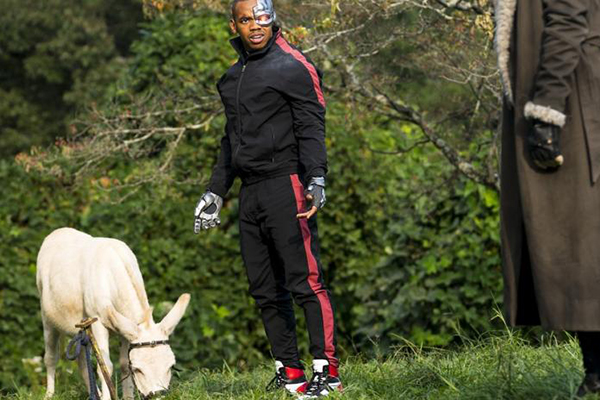 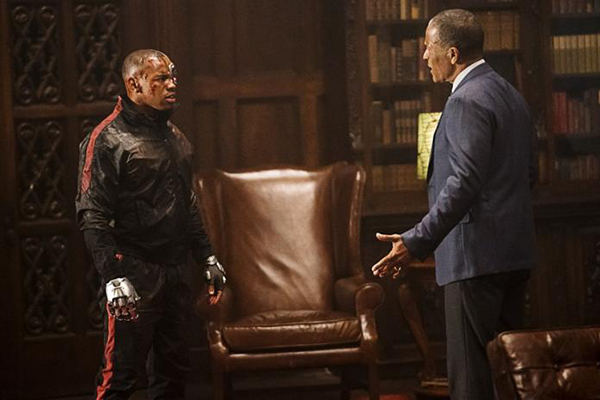 Sadly, the one slightly sour note this episode is Cyborg. That's nothing against Wade's performance, but the character so far hasn't really come in to focus. The last episode was devoted to the three main heroes (and introducing Jane) and they had already have another episode before that in the back-door pilot over on Titans. In comparison to all that setup, Cyborg just doesn't get enough screen time for us to really care about him. All we really know is he was in an accident and has daddy issues -- less a character background than a collection of tropes.

I totally get why Cyborg is getting introduced on the show -- as a half-man, half-robot he's a character that could seemingly blend in well with the rest of the Patrol. Plus, he's a key member of some versions of the Teen Titans, so introducing him into the DC Universe (and the same realm as Titans) makes a lot of sense. It's just odd that his introduction doesn't work considering how many odd characters Titans brought in during it's run, like Wonder Girl, Hawk, and Dove. Those characters all felt well realized and complete in their brief time, but Cyborg is going to be a regular on Doom Patrol and he still hasn't come into focus.

Also, and I realize this is a petty nit-pick for a TV series, but his makeup effects don't look great. He looks like an actor wearing some plastic prosthetics to look like a Cyborg, not an actual person. I hope the show can improve this, and his character, over the next few episodes because, right now, he's just not working.