Evil Is Just One Town Away

Another week has come and gone and I was once again sorely tempted to just talk about Titans. Seriously, this week's episode was really good, but we need to focus and pay due diligence to the other series in this expanded universe. I'm just realizing that if DC decides to air more than one of their connected shows at a time on their streaming service I'll probably have to spin Titans will have to spin-out from this article series over to there. That or DC just needs to tell us if all these shows are connected or not. That would be super helpful at some point.

Instead of continuing to rave about the adventures of Robin and Co. in the main column, though, we'll be taking a deep dive into this week's Legends of Tomorrow and Black Lightning, two very different episodes that both move their plot lines forward a fair bit.

As with most Legends episodes, we have three major plot lines going on this week. To start, the A-plot (from which the episode gets its name) follows White Canary, Firestorm, Charlie, and Zari as they travel to 1960s Japan on the hunt for a magical creature. What they find, though, is a film production about a giant monster, Tagumo, attacking Tokyo. You know, Godzilla but without the licensing rights. The monster isn't the real magical creature, though -- instead, it's caused by a magical tome, one that finds an artist and them empowers them to create, for real, their vision of the universe. Tagumo is the fears of its designer, committed to the pages of the tome, and the team has to find a way to defeat the monster before it really does destroy the city.

While the main plot is amusing (and, once again, allows the show to riff on pop-culture directly), this was probably one of the weakest A-plots the show has had in a while. Sure, the monster has an interesting hook, and the story allows the most unlikely hero, Firestorm, to save the day (through the power of his writing, no less). On the whole, though, the story just wasn't all that memorable. I struggle, even now, to remember what exactly occurred even after a big fight between Tagumo and a giant, three-breasted warrioress (who then, after defeating the monsters, has sex with Firestorm right on the spot). If you can't remember that, there's something missing from the adventure.

No, the reason why this episode worked for me was because of the B- and C-plots. The first involved Ray trying to find a cure for Constantine. As you might remember, at the end of the last episode Constantine gave his life force to a kid to save them from an evil witch (seriously, you need to try and keep up and watch these episodes along with me). Well, Constantine is dying and he's going to need some kind of magical infusion to cure him. Thus, Ray goes off to find Nora Darhk. You might remember her as the primary villain from last season who, by that season's ends, had developed a chemistry with Ray and, with a change of heart, decided not to be quite so evil any more. Ray sent her on the run and she's been hiding from the Legends ever since. 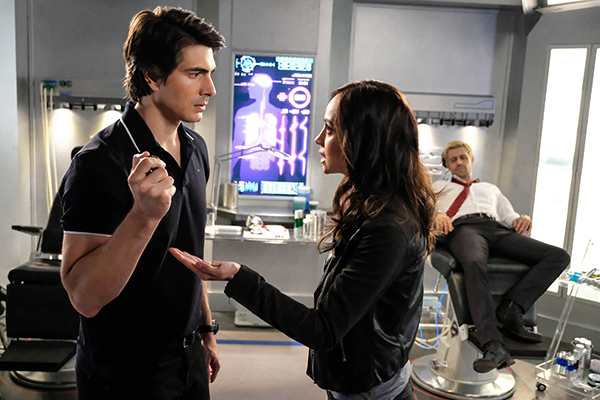 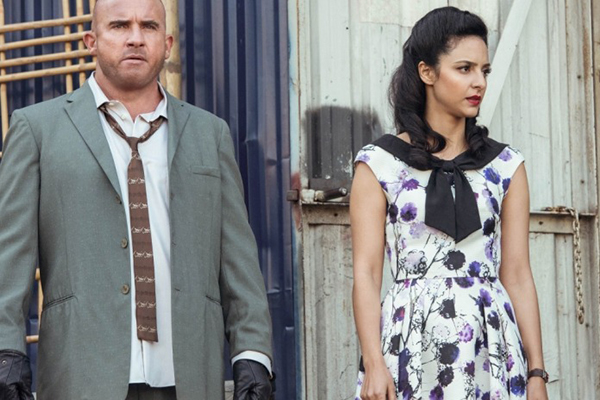 Ray goes off to find her, which he does, and we get a few great scenes between him and Nora as they try to find a way to save Constantine. This ends up serving two pieces of the story moving forward. Firstly, because Ray saves Constantine, the latter feels like he ends up owning Ray something, and this could easily lead to him becoming a more integrated force on the team moving forward (and issue he's had since his introduction on the show). It also gives Nora time to grow as a character, and leads to her decision to turn herself in to the authorities and face justice for what she did in the last season. This could lead her to being an even better, more interesting character down the road, or...

Well, that ties into the third plot line for the season. Nate takes Eva, his co-leader at the Time Bureau, to Thanksgiving at his family's house (totally platonic as she's gay). While there, an issue comes up at the bureau -- magical monsters that have been caught by the Legends break out of containment and start wrecking the bureau's offices. Nate, along with perennial doofus Gary, has to find a way to get the monsters back into containment. He does, and in the process has a good bonding moment with his father (who is also on the oversight committee for the bureau) over the whole incident, and all the characters move forward.

That said, there's then a twist. It's revealed that with Nate figuring out a way to control and contain the monsters, his father wants to find a way to capture the beasts and use them as super-soldiers (instead of what the bureau wants to do: send them back to Hell). This has ramifications for Nora since it's entirely possible she could think she's turned herself in for her own good but then gets turned into a magical force of evil for the government. Where this whole plot line goes, and what it means for the team, could shift Legends into high gear for the season. I'm really looking forward to seeing where it all goes.

Last episode Uncle Gambi died, Anissa aided a young, pregnant couple, and Lynn watched as the lab-rat children she was trying to tend to suddenly started dying one-by-one. This episode continues all of their plot lines Of course, the first and most obvious thing to happen in the next episode is that Gambi is revealed to not be dead. As soon as the episode begins we watch how he escaped the van (which, really, is just a simple retcon that shouldn't have worked but this is a superhero show so of course it did). He's been faking his death for the last week, of course, but he's still keeping an eye on the rest of his adopted family. While I'm irritated by this sudden backtracking on Gambi's supposed death, it's a movie I fully expected so I can only be so mad.

Besides, there's a much bigger plot line that gets introduced in this episode. The boyfriend in the pregnant couple, Deacon, showed up at Anissa's clinic at the end of last episode, dying. As she watched, he passed away, and then this weird silver ooze poured out of him before disappearing, almost like it had a mind of its own. At his dying request, Anissa heads to South Freeland (sister city of main setting, Freeland) to find his girlfriend, Anaya, and make sure she's okay. What she's gets mixed up in, though, is a race war of sorts between the Sange (white people with superpowers) and the Perdi (black people without any powers). The Perdi works as farmers, hiding in the woods, while the Sange run the town. Leading the Sange, and the one giving them their powers, is the Looker, a powerful meta-human who injects her followers with Element, the silvery liquids that poured out of Deacon.

As it's revealed, Looker actually controls the rest of the Sange, not only giving them powers but also commanding them and seeing through their eyes. In a way, Looker is like a Master Vampire, infecting her flock with her gifts and abilities but also using them for herself. If not for a lack of bloodletting (that we've seen so far), the vampire comparison would be perfect. And she's an interesting opposing force to Black Lightning and his team as she uses while he gives, she controls while he's fighting for free will for his city. With only a single episode, Looker has already become a more interesting villain that Tobias Whale and I hope they actually keep her around for a while as this show could use a good villain to hang the action on. 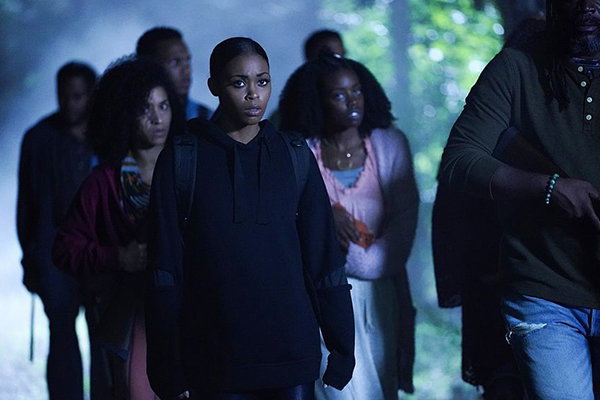 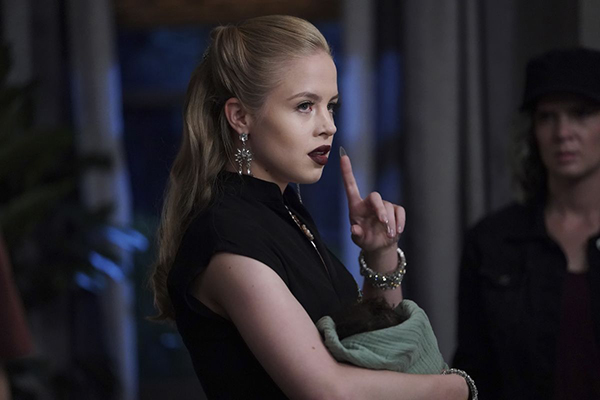 Speaking of Tobias, he still has some master plan for Freeland that has yet to be revealed. To that end, though, he sends his underling, Painkiller, to go kill the priest in charge of the free clinic in town. That clinic just so happens to reside on the one plot of land on a particular chunk of Freeland that Tobias wants and the priest won't see. Painkiller refuses to kill the priest so Tobias beats up Painkiller and then orders him to kill the priest again. Then Painkiller seems to just go on the run, leaving Tobias without anyone I guess. While Tobias is a lame villain, the show was really doing a good job building up Painkiller. If he actually does leave for green pastures outside Freeland, Tobias is going to be even more uninteresting that he's already become. Good thing Looker is over in the other city.

Still, Tobias is more interesting than Lynn. Her story is taking forever to move forward as, after the big events of last week when she lost the kids under her care, she spends this entire episode wallowing at home, feeling depressed. Worse, her plot line absorbs Jennifer, the younger daughter, as that character has to tend to her mother for the whole episode. nothing really moves forward for either character and we're left to wait until next time to see if they manage to get themselves in check and figure out their next steps.

So once again we're left with a show that takes two steps forward in some ways and yet still manages to spin so many of its wheels. I really need this show to get moving, and quick. Right now, Black Lightning just isn't giving us enough forward momentum despite introducing a new, much more interesting villain to the proceedings.