The Season Comes to a Close

Here we are, the last episode of the last show of the season. After a full year of ArrowverseWhen it was announced that the CW was creating a show based on the Green Arrow, people laughed. The CW? Really? Was it going to be teen-oriented like everything else on the network and be called "Arrow High"? And yet that one show, Arrow has spawned three spin-offs, various related shows and given DC a successful shared universe, the Arrowverse on TV and streaming. stories, a big, universe rebuilding event, and then the Coronavirus, it all comes down to the Legends of Tomorrow to take us home.

We will review this last episode, then talk about some other news in the 'verse, before looking back at the season as a whole:

Leave it to Legends to send off this season in style. I know I've said this before but it's amazing how far this show has come since it's first (awful season) featuring Vandal Savage. Who knew that show would eventually become this series in the whole of the Arrowverse? I keep hoping the other shows that are struggling will find their feet and manage to rebuild themselves in a way that makes them fun and interesting, how Legends did, but maybe that's the exception, not the rule. Whatever the case, Legends of Tomorrow does, indeed, meet all expectations for the show in an episode that sends the series (and the year) out with style.

This year the Legends have been battling the three Fates, with their usual ramshackle, but delightful, plotting. Last week the heroes were captured and trapped in TV, their life-threads tied up in a machine so they were forced to live out episodic adventures. They escaped, and this week they had to find a way to finish off the Loom of Fate and stop the Fates once and for all. They do, indeed, find a way to break the Loom, killing Atropos in the process. Lachesis, the head Fate, survives, and though the Legends leap ahead four months to see if time and fate has recovered, they find a world still trapped under the thrall of Fate. So heroes have to band together to take on Lachesis one last time and restore free will to all humanity.

That's all what you expect from a superhero show. What you probably wouldn't expect is the heroes battling many of history's worst villains in a museum while "Thong Song" plays in the background. It's such a dumb and delightful set piece that takes all the tropes of a superhero fight sequence and turns it on its head. And then the show decides not to have Lachesis get taken down in a violent fight but through caring and forgiveness. It's a resolution that befits the storylines, the characters, and the show as a whole. This episode is a real charmer. 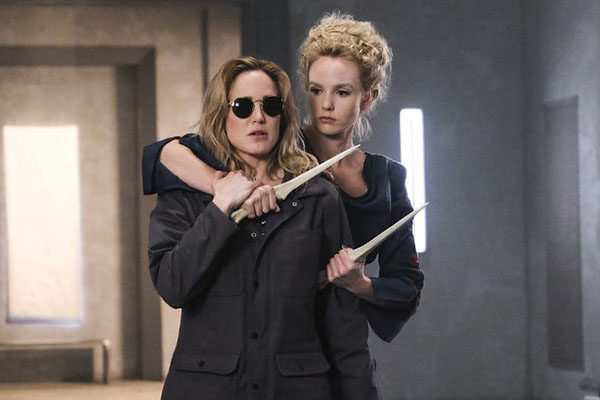 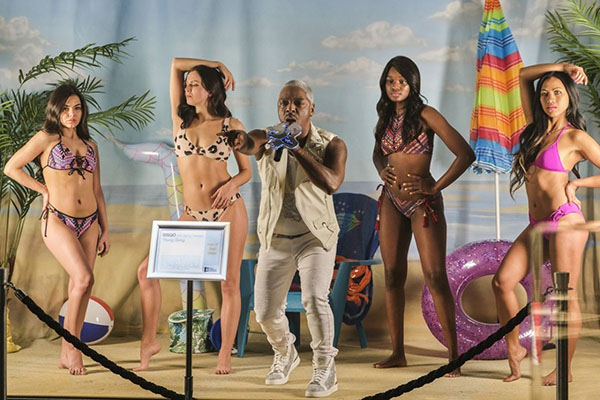 The episode wasn't without consequences. The biggest loss is that of Zari 1.0. She was brought back into existence by Charlie last week and, with her roaming around and being a problem solver, I realize how much we've missed her. She brought a vital energy to the show and while Zari 2.0 (the vapid, social media star) is amusing, she's nowhere near as interesting. But Zari 1.0 existing meant time would try to reset itself and Behrad, who died in the original timeline, would die again her, so Zari sacrifices herself so her brother can live. It's sweet, and it works (no need for two Zaris, I get it), but I'll miss this character.

Charlie also leaves the show, and in this case it's a solid decision. I like the character but it does feel like she's run her whole storyline now. Best to let her roam off into the sunset and have her happily ever after. The show could always bring her back (hell, it's brought just about every major character back, hero and villain, at least once at this point) but the send off for her was solid.

Just, overall, this show knows what it's doing. It's the best show in the 'verse because it respects its characters and it's storylines, doesn't try to rush anything, and knows how to have fun. If only the other shows in the Arrowverse had this much good sense. Without a doubt this is the one show I'm looking forward to next year when the series, as it does, reinvents itself once more (this time to go after Sara who, apparently, has been abducted by aliens right at the end of the episode). If I were only going to watch one series in this 'verse, Legends would be it.

Overall, this season has been pretty darn lackluster, and I think all the problems really came from "Crisis on Infinite Earths". This crossover was, somehow, going to be the Avengers: Infinity War/Avengers: Endgame of the Arrowverse. There was only one problem with that: the producers on this series of shows had neither the budget nor, frankly, the talent to pull something like that off. It was evident early on from the fact that the first episode of the five-episode crossover failed to build any kind of tension or stakes. By episode three the whole of the multiverse had been destroyed but it didn't land with any impact. It wasn't until the fifth episode, when all the problems of the Crisis were over, that the crossover finally found energy, that it finally told a story that mattered. Such a waste.

It was also a waste of all the years spent leading up to it. What about the fact that Barry was supposed to disappear in Crisis, which caused all kind of future issues? Cast aside with a hand-wave and dropped in an instant. How about that Kara was supposed to die? Never bothered with. The shows have spent years building plans for Crisis (since the first season of The Flash) only to cast it all aside because it didn't know what to do with all of that once the crossover came up. Instead of giving us big resolution and huge moments that paid off all of the build up, the show just kind of wandered off, did it's own tedious thing, and then wrapped it up and in a pretty luke warm conclusion.

Crisis also caused a problem for a number of shows this season, namely in the fact that Crisis was supposed to change the world and the shows were going to be dramatically different coming out of the crossover. Thus, many of the shows were divided up weirdly -- The Flash and Supergirl were bifurcated in their storytelling, with the first halves of their seasons being pretty awful. In the case of The Flash, that show never recovered while it took a few episodes into the back half of Supergirl for that show to finally find its feet. The last season of Arrow was dedicated entirely to Crisis but it managed to do nothing with all that build up, instead just spinning its wheels for ten episodes. 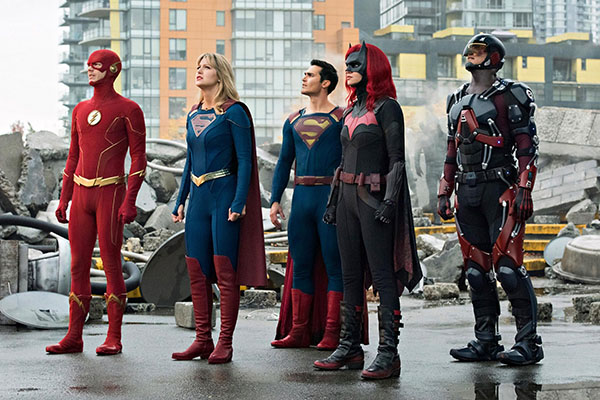 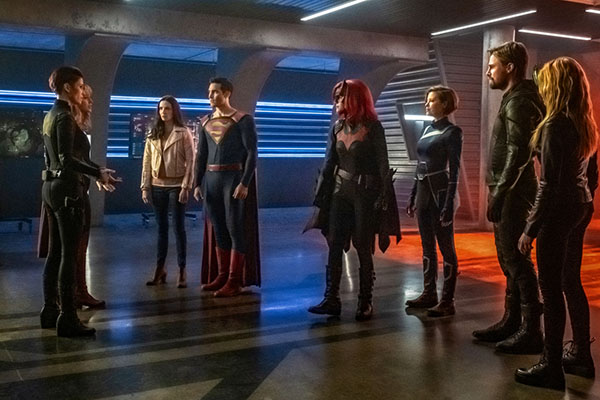 The shows that did the best ignored Crisis entirely: Batwoman and Legends of Tomorrow (the less said about how awful Black Lightning has been this season, and for all three seasons of its existence in general, the better). That shouldn't be the case for a big, universe-altering crossover, but then Crisis had a whole lot less impact on the shows than it should have. Yes, now all these shows take place on the same Earth, but what really changed for any of them? A few villains might be back, a few small details are different, but these are the same shows doing the same things, just like they always have.

"Crisis on Infinite Earths" was a complete disappointment, and it frankly sank so many of these shows this year. That might be part of the reason why, going forward, the shows are doing small crossovers and less big, earth-shaking events. At this point we've seen and done it all and, frankly, the shows are at their best when they stay grounded and try to tell real stories. This year has been kind of a wash, so lets hope going forward the shows can improve. I certainly don't think many of them can get much worse after this.

We Need to Talk About Batwoman

Previously we noted that Ruby Rose would be leaving Batwoman after only a single season for personal reasons -- the stated reason being that the schedule of the show was more than she expected or wanted to endure. At the time the CW, and the producers of the Arrowverse, stated they would recast the role, a move that made sense since this season ended with a number of plot lines left hanging (due to the shut down production schedule from the Coronavirus), and Kate was integral to all those plot lines -- she's Bruce Wayne's cousin, sister to the big villain Alice, and a key figure in the lives of just about every other major character on the show (as well as having a personal, friendly connection to Supergirl), so you'd think they'd have to recast her, right?

Apparently not. Recent reports indicate that instead of finding a new actress to slip into the role of Kate Kane they're going to create an entirely new character to done the cap and cowl (and wig) of Batwoman. The casting notice is for a gay actress to step into the new role of Ryan Wilder, a character defined (on the casting sheet) but a bunch of buzzwords: likable, messy, a little goofy, and untamed. The character will be a former drug runner who gave up that life and has been living, somehow, on the straight and narrow (and, also, living out of her van). Many DC comics fans have been left wondering who this person is as there's no Ryan Wilder in DC continuity. If the character is an amalgamation of other DC characters (something the Arrowverse has sometimes done), it's hard to see who that might be. 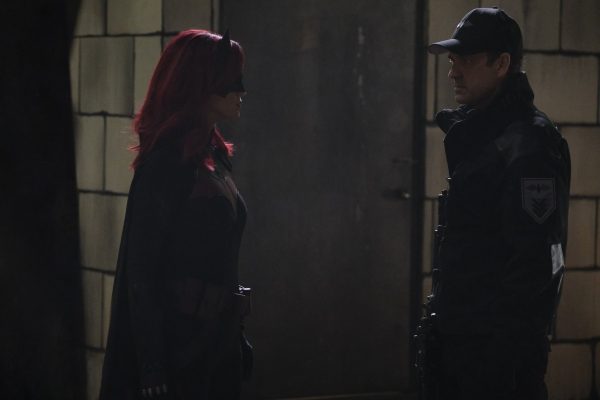 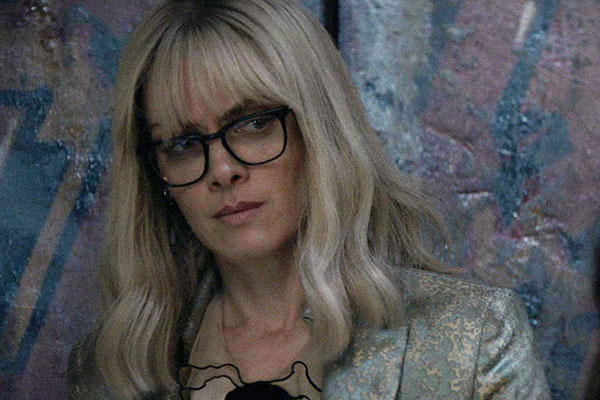 Of course, finding a replacement for Batwoman isn't easy since there's no replacement character readily available in the comics. Kate Kane, as the AV Club pointed out, has always been Batwoman since the character was introduced (and hell, even the Silver Age version of the character was named Kathy Kane). the AV Club suggested that the name, Ryan Wilder, may be fake to throw off the fans and that the character could be someone like Stephanie Brown (aka Robin IV, Batgirl III, and Spoiler), which would be an interesting choice that at least ties into current comics continuity in a a fashion. We'll have to see if that supposition is true or not.

Regardless, though, I just don't see how this new character is going to help the show. The showrunners will have to find a way to quietly shuffle Kate Kane out of the show off-screen, introduce a new character, get her to blend in with the rest of the characters already working in Gotham, and then tie up all the plot lines that were left hanging by the shortened 2019/2020 season. And that's while trying to keep fans engaged and battling poor ratings. I just don't see how any set of producers could put that off. I'll continue to watch the show (as long as I'm writing these articles I have to) but I think we should probably put Batwoman on the Death Watch because I seriously don't see this show lasting much longer.