Taking a Trip to the Past

Another week of the ArrowverseWhen it was announced that the CW was creating a show based on the Green Arrow, people laughed. The CW? Really? Was it going to be teen-oriented like everything else on the network and be called "Arrow High"? And yet that one show, Arrow has spawned three spin-offs, various related shows and given DC a successful shared universe, the Arrowverse on TV and streaming. goes by with only a couple of episodes to watch. That should change next week (assuming CW sticks to their broadcast schedule) but it does mean we get more time to take about The Flash and Supergirl. The weird thing is, if you'd asked my last year which one was better, I would have chosen Supergirl (even if last season wasn't its strongest effort). This year though, that show is stumbling and while I don't think The Flash is that great, this was a much improved episode over what we've seen this season so far.

But let's get into the particulars below. On to the reviews:

The Flash, Season 7, Episode 6: The One With The Nineties

Last week we met (what those of us in the audiences that know DC ComicsOne of the two biggest comic publishing companies in the world (and, depending on what big events are going on, the number one company), DC Comics is the home of Superman, Batman, Wonder Woman, and just about every big superhero introduced in the 1930s and 1940s. knew would be) the Sage Force with villain Psych, and the week before that we met the Strength Force in villain Fuerza. Now, of course, we get to met another one of these "Force" villains, and as we see it's all about the Still Force... although we don't have any of those names just yet. Instead we have Barry in his cryo-chamber, healing after his run-in with Psych. This leaves the time stuck trying to figure out how to detect the avatars of these new forces so they can help their team leader when the time comes for it.

There are two main plots going on with this episode. In the A-plot, the one dealing with the Still Force, Cisco and Chester go about the city (and its surrounding suburbs, installing detectors that can be paired with the STAR Labs satellites so detect the forces. Only problem is that just as they're getting the first detector in place they're hit by a wall of green energy. They soon realize they're trapped in a bubble, unable to escape the confines of the giant bubbles which is sitting over one of the suburban towns adjacent to Central City. Worse, they soon find out that the bubble is keeping the town locked in a single day back in the mid-1990s. A new Force is at play here, a time force (although the comics call it the Still Force since it can stop time, in opposition to Barry's fast moving Speed Force).

Meanwhile, the avatar of the Speed Force is at STAR Labs to seek the assistance of Barry's team. As we know from previous seasons, the avatar looks like Barry's dead mother, Nora. This actually causes some weirdness in the episode as Iris treats the Speed Force like its Barry's mother... and in return the Speed Force sort of acts like his mother. So there's some character development here, and we grow the Speed Force as a character. It's interesting... but still very under-developed so far.

So yeah, like I predicted last week, this season is going to be all about the Forces as, week after week, the menagerie of new forces are introduced and, for some reason, all settle down in Central City and all decide to come for the Flash. The plot line with Cisco and Chester works fairly well. The villain is pretty low-stakes, all things considered, but it does allow for a fair bit of fun, 1990s humor and it gets them a chance to be heroes without any super powers at all as these are the two guys that don't have powers anymore (even if Cisco did make tech to replicate the powers he once had). 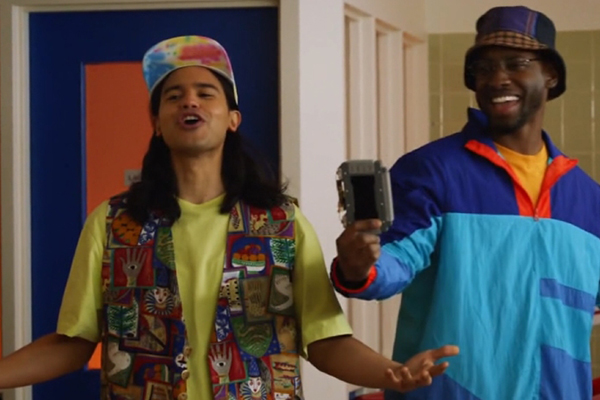 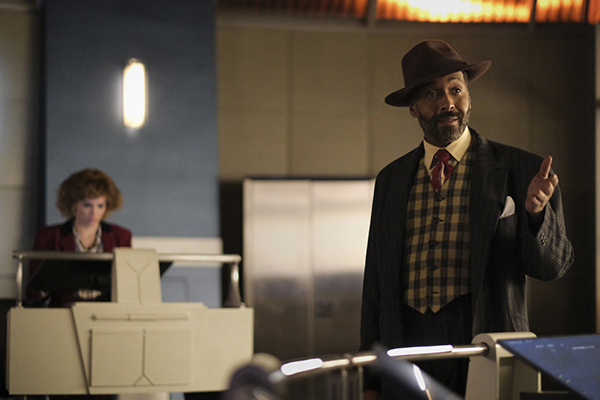 At the same time, it's hard to think of the Forces as actual characters, not just yet. Fuerza is just a CGI monster without any real personality, and while Psych is interesting looking, and has a charismatic personality, we know basically nothing about him. Even the new Still Force Avatar, a new Time God who just wants to relive the day he was a high school god of football, barely registers as an actual character. They're all collections of tropes and ticks but there's no substance here just yet.

The one interesting thing the new Forces bring in is the fact that, reading up on it, there are seven Forces in the DC Universe. One of those forces is the same power that is tapped into by the various Skittle Lanterns, so this may be a back-door way of introducing the Green Lanterns officially into this universe (which makes sense since Diggle is apparently supposed to come back soon to finish out his Lantern arc that was hinted at last year). I'm on the fence about all of this because the show is both keeping a ton of details obfuscated while also rushing through the introduction of each of these Forces. The story pacing feels off.

And yet, overall this was a stronger episode than what we've seen so far this season. It wasn't great but it was improved. I would like to see more episode like this, that take time to develop a weird scenario and have characters tackle it with heart instead of techno-babble. Last episode managed that, this episode manages it too, so maybe the show has turned a corner... I say, knowing full well Lucy will probably pull the football away any second now.

While The Flash is on the upswing, poor Supergirl is very much on the downswing. The show has frankly struggled ever since it introduced Lex Luthor back in its fourth season as the energy of the show changed. I didn't hate fourth season, I actually rather liked it and its message against, essentially, the Trump Administration, but Lex Luthor pulls the show in a direction different from where the series started and, over time, the show has suffered trying to find a way to balance the charismatic villain one side against the usual cast of characters on the other.

Part of the issue is that, frankly, the show really doesn't know what to do with Lex, not really. He's powerful, and resourceful, and is always three steps ahead of everyone else, which is exactly where Lex should be. But then, to keep the Lex in this power position, it goes through weird twists of logic to justify its storytelling. Take today's episode where Lex, having only been in jail for about a week, is already standing trial for the attempted mass murder of half the population of the Earth. This requires us to ignore the fact that even a fast-tracked case would take a couple of months to move through the system, and that would be a standard case. One as high profile as this would go on for at least a year in pre-trial motions and legal maneuvering.

Assuming we let that slide, we then have a district attorney handling the case (despite this clearly being a national, if not international crime) and their entire case hinges on no actual evidence but the testimony of one flawed witness (at least before Lena Luthor steps up and raises that bar to two flawed witnesses). It's not that there isn't evidence to be found -- Lex didn't really ever clean up after himself -- it's just that the show ignores all of it so it can rush to Lex being acquitted of his hideous crimes. Again. This is a case that should have gone to the Hague where it spent two years being developed before the first day of the actual trial was even heard. This whole storyline is, in short, stupid. 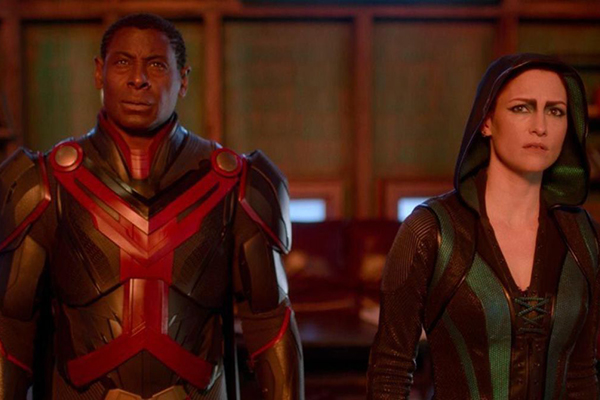 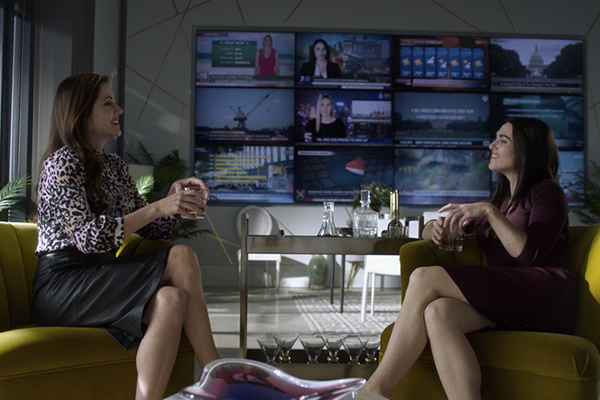 Meanwhile, we have the whole of Team Supergirl (as the D.E.O. has been dropped entirely from this show) working to try and find a way to save Supergirl from the Phantom Zone. The parts with Supergirl are, honestly, fine and good. She wanders this desolate place, meets her dad (who's been trapped here this whole time since the explosion of Krypton, although time is meaningless in the Phantom Zone) and then tries to find a way to escape the literal phantoms that haunt the zone. That's all well and good. I mean, it doesn't really have any spark to it as, we know, eventually she'll break free because you can't have a Supergirl show without Supergirl, but it's at least a change of pace for the storytelling.

No, the issue here is that the rest of Team Supergirl is ridiculous, and it's only more obvious without the lead heroine in the middle of it all. The team frantically tries to find a way to save Kara, so they enlist the help of a literal vampire (because apparently those are things now in this continuity) because he has the knowledge of how to break into the Phantom Zone. Then there's a lot of goofiness about Dreamer using her powers -- "you need to dream!" -- and then a big fight between the heroes and the Phantoms that, to put it bluntly, looks dumb as shit. Everything about this half of the story is just wrong; it's goofy, it's silly, and it's poorly written. Whatever emotional stakes the show wants to invest in Kara being trapped in the Phantom Zone it absolutely fails to deliver.