Swooping In for One More Season

This week gives us a couple of bit developments for the ArrowverseWhen it was announced that the CW was creating a show based on the Green Arrow, people laughed. The CW? Really? Was it going to be teen-oriented like everything else on the network and be called "Arrow High"? And yet that one show, Arrow has spawned three spin-offs, various related shows and given DC a successful shared universe, the Arrowverse on TV and streaming., the largest of which is the return of Supergirl to the airwaves. This will be the last season of that show and, likely, for the character as lead actress Melissa Benoist has said she's done playing the Girl of Steel after this season. Couple that with a big development over on the Flash (that a number of fans Online guessed was coming) and we're in for a lot to talk about.

Sorry, Batwoman, we'll talk about you next week. We have bigger fish to fry:

We now rejoin our story on Supergirl, already in progress. Much like with The Flash earlier this season, the team behind Supergirl decided to have their new season pick right up where the last one left off (due to COVID shutting everything down). It's a weird choice here, though, as that previous season had something of a finale. A cliffhanger finale, yes, but there were ways for them to pick up a few months later and start the season off on a new angle. Instead, though, we have a season premiere that feels more like a season finale... and not a very good one.

As we'd left things off, Brainiac 5 had just captured the old gods of Leviathan in a magic bottle, but that bottle was then taken by Lex Luthor. Meanwhile, one last god, Gamemnae, the goddess of tech, avoided being captured. She shows up at the Leviathan ship, and then the whole of Team Supergirl shows up as well. They fight, and then Brainiac has the idea to use the "Anti-Life Equation" to somehow kill Gamemnae. That's the first ten minutes of the episode.

From here, Lex uses the power of the old gods to make himself into a new god (but not a New God as that's a different story). He then puts the whole world in peril to sate his own ego. He has plans to do "what the Anti-Monitor couldn't" and remake the multiverse in his own image, but first he has to start with Earth. He already used the Miriad tech coupled with the VR headsets of Obsidian North to reprogram half the citizens of the planet to worship him as a hero who could do no wrong (he could walk down the street and shoot someone and get away with it, to use Trump's words), but he still has to eliminated the other half of the population. Quite literally eliminate them. This, of course, spurns Team Supergirl on to fight Lex, find a way to depower him, and save all of humanity, and for some reason they do all of this in a single episode.

So, here's the deal: this is the last season of Supergirl and, for whatever reason, it also is only going to run 20 episodes (down from 22 or 23 in the previous CW seasons). The team clearly had a desire to wrap up the previous season's story so they could focus on the arc for the last season. If they spent two or three episodes on the wrap up from last season that would give them even less for the story this time around. What this means, then, is that this episode feels like it has to rush to get through three episodes of story (from last season) in a single episode here and it just doesn't work. It's not a slog, as the episode moves too fast for that, but it does feel like an incomprehensible mess as things happen, people spout off technobabble, and then suddenly the villains are defeated. Hurray? 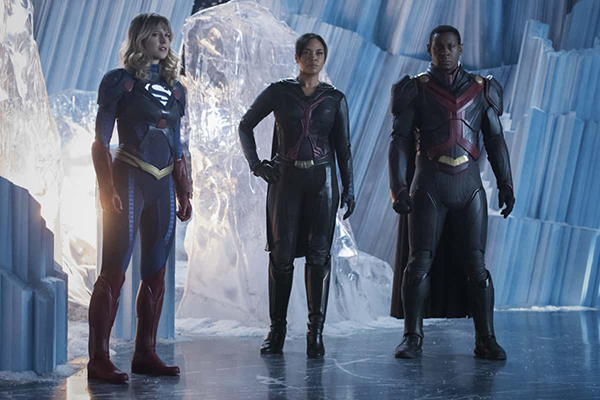 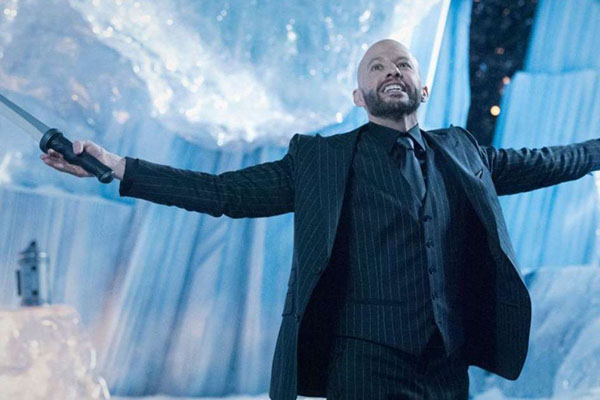 The villains certainly get the short end of the stick here. Gamemnae was set up to be this evil force, the best and strongest of the Leviathan gods. Then the show dispatches her here after a single line of dialogue from the villainess. That's some shitty treatment for her, but it's not as bad as how Lex gets it. Yes, he's an egotistical megalomaniac who, in every version of the character, just thinks about himself. But even in those times he's never come across as blatantly evil as he does here. Lex wants to rule the world, not kill half its population, so that twist in the story seems way out of character. And his mother, who has also always said her goal was to "defend humanity from aliens" is okay with him wiping away half the population of Earth. Really? Well, okay...

Not that the heroes fare much better here. There's hardly any time for character development, and any time the episode tries to nod towards it we get a single platitude from someone, a hug, and then everything is okay. This is a show that can swing big and go for both action and heart. Generally it nails it but those kinds of moments take time, and development, to achieve. This episode doesn't have the time to do any of that so none of it lands. Instead of caring about any of the characters or what they're up to here the show rushes through all of it and we just end up wishing it would all be over.

The episode ends with Lex getting a lucky shot from a Phantom Zone projector and sending Supergirl into that awful pocket dimension. I don't know if the plan is to spend this season looking for a way to free the heroine and then, presumably, deal with whatever threat they unleash from the Phantom Zone after. If that's the case, and we can then spend 19 episodes on that arc, I might forgive this first episode. Right now, though, this is a bad start to the last season of the show. Supergirl deserves better.

Meanwhile, over on The Flash, we're finally getting an idea of where this season is going and, apparently, it's the reveal of the Seven Forces of the Universe. The show has talked about the Speed Force regularly (even giving it a god-like figure that looks like Barry Allen's mother so the hero can talk to the Speed Force). Now, though, after restoring the Speed Force previously, Barry has apparently unlocked the other Forces as well, and we're having to deal with villains using those forces for their own means.

Last week we saw the reveal of Fuerza (Spanish for Strength), a hulking giant who shrugged off Barry Allen's lightning attack like it was nothing. Fuerza taps into the Strength Force (although the show hasn't named it as such yet) and proved to be more than powerful enough to take Barry down. This week gives us another Force-using villain, the fear-wielding Psych. This villain is tapped into the Sage Force, which grants its users genius-level intellect and psychic powers. Barry and his team kind of defeat the villain, with the help of Cecile and her own empath abilities (tapped into the chair of The Thinker), but I doubt we've seen the last of him just yet.

The introduction of these new forces feels kind of natural for the series, in a way. It's an outgrowth of the exploration the series did in previous season, between the natural Speed Force that Barry and the other speedsters tapped into, and the Reverse Flash and his Negative Speed Force that he artificially created. Redefining this and adding on new layers of forces is interesting, for sure, and helps to create more and different villains for the heroes to fight. I don't mind that, necessarily, as it means we're not just fighting the same guys over and over again in different ways. That way leads to repetition. 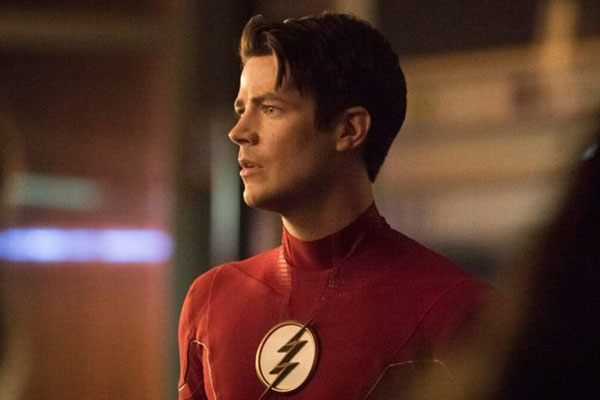 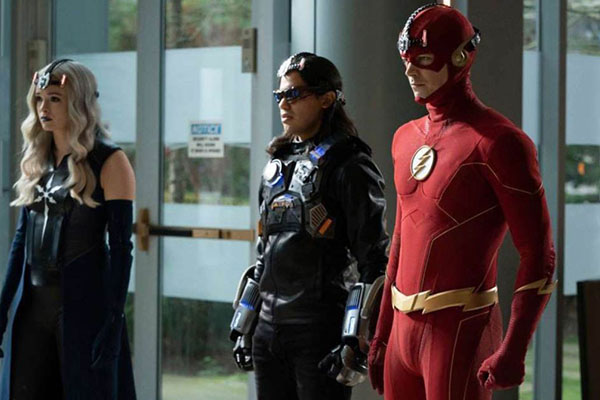 And yet, there's still a feeling of repetition here, even still. The first couple of seasons everyone had to be a meta. Then meta tech was introduced and every villain had to be tapped into this technology. This was followed by the introduction of the Mirrorverse and suddenly every villain had to be a mirror-clone. Now, what, every villain is going to be a Force-ster? How many ways can the show find to essentially beat a dead horse? I want fresh ideas, not new ideas slapped over the same formula, but I think it might be asking too much of the show to expect true originality at this point.

That said, at least for this episode it did work. Psych is a more interesting villain than some, and he wasn't someone the heroes could just punch. Instead they gave Cecile something real to do, and it wasn't just a technobabble solution. Instead they used past ideas setup by previous seasons and naturally fit the character, and the tech, into the show in a way that made sense. It felt natural, not forced, and I greatly appreciated that. Again, I doubt they finished off Psych for real (and if they did, that's a waste of a good villain), but for a climactic way to best the bad guy this time it worked well.

I still have my doubts about how well the show can keep this going -- The Flash absolutely feel long in the tooth now -- but if it can at least keep episodes like this coming (over some of the dreck of previous episodes this season -- it should be fairly watchable for the run here. We shall see, but this is at least a provisional thumbs up so far.