I find it hard to not judge this season of the ArrowverseWhen it was announced that the CW was creating a show based on the Green Arrow, people laughed. The CW? Really? Was it going to be teen-oriented like everything else on the network and be called "Arrow High"? And yet that one show, Arrow has spawned three spin-offs, various related shows and given DC a successful shared universe, the Arrowverse on TV and streaming. already. We have Crisis on Infinite Earths coming up at the end of the month and that's going to remake the whole of the 'verse. Whatever is getting setup now is going to be very different after the big crossover event, meaning that the missteps and padding so many of these shows seems to be struggling with could all fade away after Crisis. That means this first part of the year could be more of a mini-season than a true part of the adventures to come post-Crisis, but who knows.

That's the problem with the situation we're in right now. The Flash is going to die in Crisis, and five-to-one Supergirl dies as well. Neither of those deaths are going to permanent, I'm sure, but it does mean that everything has to feel like it's building to a conclusion before the crossover. And yet, none of it really feels like it's building to anything (well, except Arrow as we'll see below), everything is just cruising on auto-pilot until we get get to the post-Crisis 'verse and stop beating around the bush.

So yeah, it's a struggle. There are still moments I like a lot, but this years has had a pretty rocky start and it doesn't feel like most of the shows are going to be able to recover from in for the next four or so episodes, not until after Crisis. I just wish this part of the season didn't feel so disposable.

One of the bright spots this week comes from the show that's been around the longest. I've commented in the past that Arrow has felt pretty long in the tooth for some time, and that criticism still stands. This is a show that used to burn through plot and characters nearly as fast as early seasons of The Vampire Diaries, but now just plods along until the three keys moments in every season of the Arrowverse. The shortened season is at least going to prevent that issue -- the show is going to culminate at the crossover event this season and then end -- but it doesn't stop it from plodding along regardless.

Take this week's episode. In some regards it's a highlight of late-era Arrow. To find out more information about the Monitor, Oliver elects to go to the one place he knows could have mystical archives that stretch back far enough to potentially document the immortal cosmic being. That means going to Nanda Parbat, the home of the League of Assassins, to find any information that might be available. TO that end, Oliver teams up with his sister, Thea (back for a one-episode appearance), and Talia Al'Ghul, both of whom are on the island and can aid him in getting the information he needs. This set of scenes is great because if harkens back to earlier episodes and builds upon the history these characters have together. There's palpable chemistry here that livens their scenes.

And yet, at the same time, the heroes run around a lot but not a whole lot is actually resolved. Sure, Oliver eventually gets the information he needs but it only leads to more questions and absolutely no answers, making it seem like this whole plot line was meaningless. Meanwhile, Thea and Talia have a kiss-and-make-up moment that feels beyond forced. It's all to setup some (poorly named) League of Heroes (that many are speculating will become the Justice League) but it just doesn't work in thee context of anything we've seen before. And that basically illustrates the worst parts of late era Arrow: drawing things out needlessly and then having plot happen because the timeline of the season dictates it and not because it works for the characters. 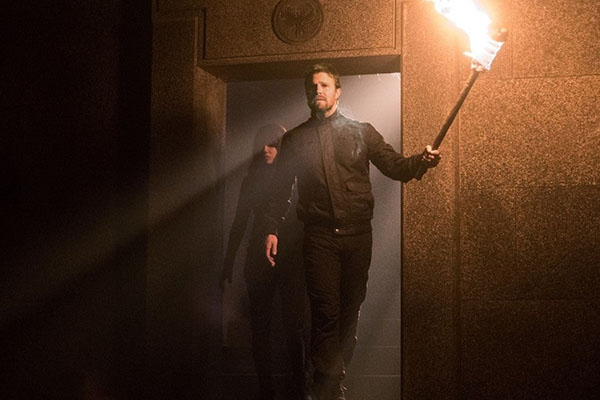 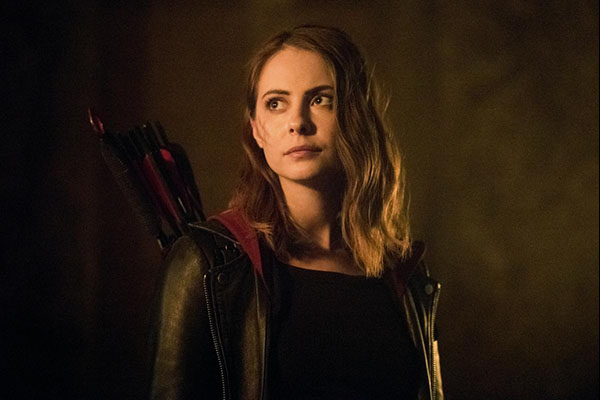 That said, the portions with Oliver are the best part of this episode. We have the continuing adventures of Team Arrow 2.0 in the future and, man, none of this works at all. We're supposed to care about these new heroes but none of them, outside of Mia, are at all interesting (and she's only interesting by comparison). One of them actually dies this episode and I just yawned -- who cares about this version of the character that might very well get wiped away anyway in the Crisis? That's the problem with having a future-set plot line: the upcoming crossover that's said to redefine the entirety of existence is likely going to wipe all of it away, so why get invested?

And that's only exacerbated by the end of the episode when, for reasons still a mystery to us, the remaining heroes of Mia/Arrow II, William/Overwatch II, and Diggle Jr./Spartan II are warped back into the past to confront Team Arrow 1.0. It so they can fight in the Crisis along with everyone else, sure, but are they going to go back into the future? Is that future even going to exist once the crossover is over? A lot of fans were excited for this moment but I just felt like it hollowed out the future section of the show even further. What is the point of all this, Arrow?

I have seriously mixed feelings about this whole year of the 'verse, and the flagship series of the show perfectly illustrates why. Everything feels like on-step forward, two-steps back, and very little actually happens until some big moment for no clear reason. This episode is that in microcosm.

On the flip side, we've somehow managed to get two back-to-back episodes of Black Lightning that didn't suck and were, in fact, actually pretty good. It's a feat I didn't think possible, but the show is proving me wrong. Part of this is, obviously, because the show isn't directly dependent upon the Crisis for the back-half of its storytelling. Even though the heroes from this show are going to cross into the main event, Black Lightning has stood apart; it may be donating its characters but it's not giving over any of its episodes. Next year, after the crossover, this show will continue as if nothing happened and can continue on the path its already set for itself.

And right now that path seems pretty solid. As I noted last week, Agent Odell is a much more interesting villain the Tobias Whale. That's perfectly shown here by the fact that Odell is front and center in this episode and Whale is nowhere to be seen at all. This is the Agent's show, start to finish, and it's pretty clear he has a plan. Specifically he knows he can't defeat the Pierce family if they're united, so he's doing everything he can to drive wedges between all of them, to single out Black Lightning so he doesn't have his support system to aid him. For starters, that means using subliminal messaging to get Lynn (my least favorite character on this show) hooked on a version of Greenlight so she can be easily controlled by the agency. All she wants to do is work for the ASA and study the metas, and that leads her to basically drop her relationship with Jefferson and live at the ASA compound full time.

Next, the agent has been working with Jennifer (aka Lightning) to make her a willing agent of the ASA. Black Lightning is powerful, but his daughter is so much more so. With her under the ASA'a wing, the agency could have the most powerful meta they've seen working towards their goals. Everything Odell says, clearly, is a lie but Jennifer eats it up because it's a truth she wants to believe. She wants to think the Markovians are attacking and that the ASA are the good guys despite the occupation of Freeland and the horrible things the ASA are doing to metas. She wants it all to be okay, and Odell is able to feed her the kind of information she needs. This is evident by the fact that, in class, she ends up spouting pro-ASA information. She's becoming one of them. 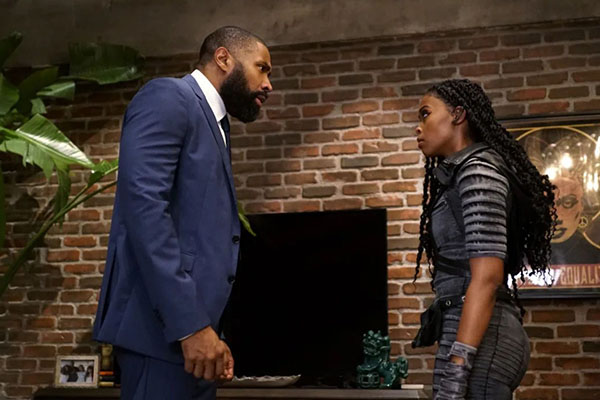 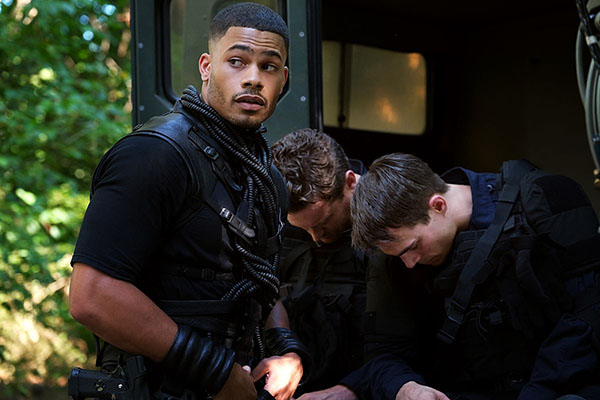 Then there's Anissa who isn't actually a pawn of the ASA (yet) but despite this a wedge is still growing between her and her father. Everything the ASA does makes Anissa (aka, Thunder) want to fight back and Jeff just wants to keep a lower profile and find subtler ways to work the system. They butt heads over this, over her new girlfriend (who knows who Anissa, and thereby her family) is, and could be a real problem for the whole crew if the relationship ever ended. Anissa is headstrong, and when pushed so is Jefferson, and so the two can't see eye to eye either.

And it all feeds back to Odell and his glorious plan to take over Freeland and create his meta army. That's clearly his goal, long term, making him just as much of a villain as the supposed Markovians. And, as we slowly watch it all unfold, it works. These are plot points defined by the characters that work because they have a basis in the reality of the show. After two seasons of floundering about, it's weird to think that Black Lightning may have finally found a villain that unified the show and gives the series the focus it always needed.