When in Doubt, Kill a Character

This week made it very hard to choose which episodes to cover. Each series made progress on their various plot lines this week, and all seem to be striving towards their end game in various ways. I honestly could have covered any two episodes and felt justified with the choice.

In the end I figured that since all the episodes could have been reviewed, and we already did Supergirl and Arrow last week, we should make a nod towards equal coverage and look at The Flash and Black Lightning now.

Team Flash is desperate to figure out how to stop Cicada. After the events of last week -- XS was injured by Cicada, which causes Flash to go off the handle and attempt to get violent revenge against Cicada for damaging Flash's daughter -- Flash realizes that the best way to stop the villain is to help his comatose niece. Remember, Cicada is killing meta-humans because his niece (who he loves like a daughter) was injured in a meta-attack, so he blames all metas (right or wrong, of course).

To that end, Wells suggest they use a mind-transfer device so that members of Team Flash go into the young girl's mind and try to free her from her coma. XS has her own secrets she wants to keep private (namely that she's working with a future version of the Reverse Flash), and since the mind-connection device would also connect the brains of whoever uses it (potentially exposing their own secrets), she goes into the young girl's mind alone... and then gets stuck there. Barry and Iris have to go into the mind as well to try and save her, but instead of going into the comatose girl's memories they end up in XS's mind instead.

This twist means that Barry and Iris get to experience XS's young memories, can see how she grew up and what formed and shaped her into the future woman she'd become. Meanwhile, XS ends up trying, and failing, to help the young girl, only to realize that the niece is as crazy (and murderous) as her uncle. She, too, blames meta-humans for what's happened to her. In the end, they all have to abandon to girl to her coma, with another plan to end Cicada's reign of terror fizzling out.

There are a couple of parts to this episode I really liked, and that starts with Cicada's niece (who I'm sure has a name but she's not interesting enough for me to research that just yet). She's crazy and evil and much of that can be chalked up to her coma and the brain damage and all that Something the show hints at, and never spells out, is that I think she also is going to grow up to be Cicada II. As we saw in XS's memories of the future (her own past, because time travel), Cicada was seemingly stopped before coming back and going on to kill 152 meta-humans all told. Cicada also shows up in the niece's memories, but if you look closely, this version of Cicada has long, blond hair (not unlike the niece). 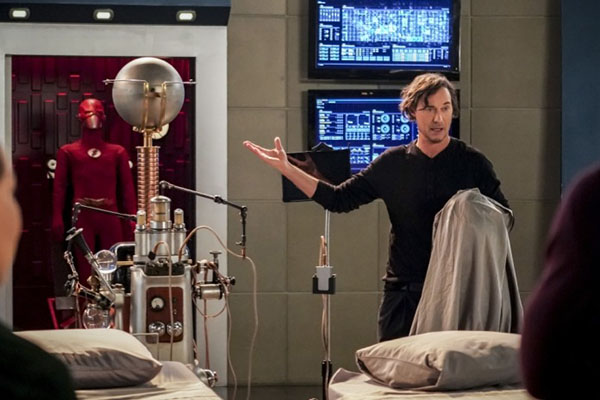 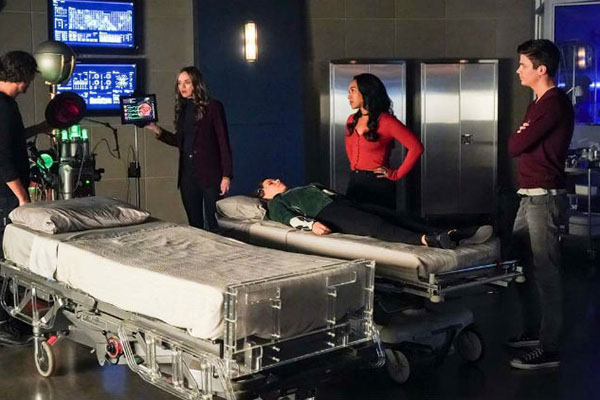 It's entirely possible that Team Flash does, indeed, stop Cicada and end his reign of terror down the line. But then, blaming the Flash for her uncle's death (or incarceration, or whatever), the girl eventually picks up his mantle (and his mask) and continues his work. It's a twist I like and it shows that the team doesn't just have to stop one villain but also prevent another from even forming. And, presumably, both those steps will somehow eventually stop Barry from dying in the future (as has been a major plot line of the show since the very first episode). It's all, probably, connected.

I also did appreciate more focus on XS's past, giving us an idea of who she is and why she's in the future. The character has been so vague for so long because we've only ever had what she's told us to go on. This is a big, new character inserted into the Team at the start of the season (ala Dawn on Buffy and suddenly we're just supposed to accept her as a permanent member of the team. Anything the show can do to illustrate the history of the character should be lauded.

Unfortunately, time travel shenanigans drag down this over-arching plot line My big issue with XS is that her plot line is tied in to Eobard Thawn's (aka, the Reverse Flash). Thawn, as you may recall, was the villain of the first season of the series. A time traveler from the future, and greatest nemesis of the Flash, Thawn died at the end of the season when his ancestor (and Iris's love interest). Detective Thawn, killed himself to prevent the Reverse Flash from every appearing at all. Any time he's shown up since then, he's been a time travel ghost, a version of him trying to outrun the eventual paradox that will come and destroy him. He was running from it on Legends and eventually failed.

What irks me is that the only version of Thawn that should still be allowed to exist is the character from the Flash's past, from a time line that doesn't technically exist any more. Sure, the show has revisited past events and Thawn has show up. I let that slide because if Thawn doesn't even exist at all in Barry's past then Barry doesn't become the Flash and the world implodes from the paradox. It's a necessary evil for a version of Thawn to continue existing in the past. But because of the events at the end of season one, Thawn shouldn't exist in any version of the future. XS shouldn't be able to work with him because he was wiped from existence. So how can this even be happening. 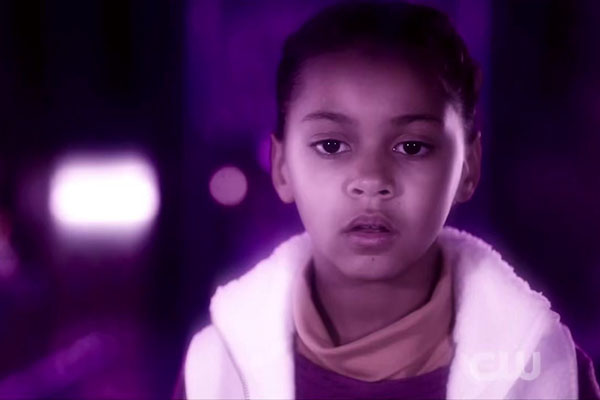 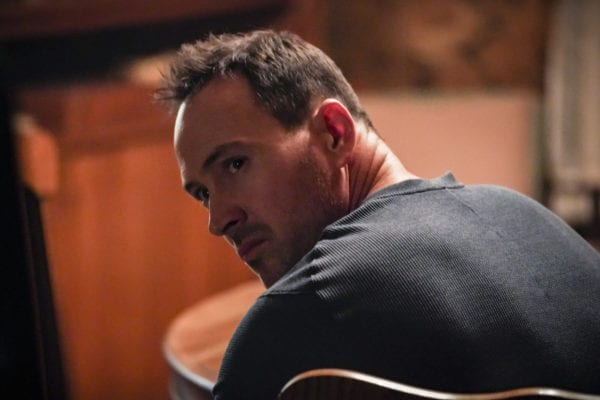 Time travel stories are interesting when there are set rules in place. The Flash has played fast and loose with its rules before, but this is the first instance that truly feels like it's breaking all the rules completely. I'm sure this is all just an excuse to try and review Thawn to be the villain of a future season of The Flash, but it really bothers me how much this character violates all the rules (and stories) of the season so far. Hell, if Thawn can bring himself back to life like this, why can't Zoom, or Savatar? What was the point of anything the show has shown us so far if it can all just be ignored and wiped away.

The twists with Cicada (and probably Cicada II) actually make the villain much more interesting. I just don't see how the show can resolve the other half of its plot this season. Thawn should have been left as dust in the past.

At the end of the last episode, Jennifer had returned how to her family and Kahlil, one-time super villain and Jen's current boyfriend, had gone into FBI custody to rat on Tobias Whale. The FBI failed, though, and Whale capture Khalil and ripped the spinal-prosthetic out of his back. Kahlil was left for dead on the street and this episode deals with the consequences of that. Essentially, it's a lot of sitting around in a hospital, slowly watching the boy to die, which makes for absolutely thrilling television.

While this goes on, Black Lightning teams up with Det. Henderson to try and get dirt on Whale. While this doesn't pan out, Kahlil does at least give B.L. some information that could, long term, help bring Whale down. So, in essence, it's a lot of spinning around without much happening.

I know I said at the beginning of this article that ever episode made progress this week, and in a way Black Lightning did. Kahlil was a boring character that really wasn't going anywhere. Killing him off does free us of him so the series can refocus on more interesting characters, It also gives us the death of someone Black Lightning, and the police, both swore to protect, which could motivate them even more to see justice be done. Maybe it'll happen, or maybe not, but I keep hoping that the Tobias Whale storyline will finally come to a head, so it can then end, and free us of this tedious super villain. If Kahlil's death gets us finally on that path, I'm all for it.

Meanwhile, it does bring Black Lightning more into the fold with Henderson. The two have had a adversarial vigilante/police dynamic for a while, but having the two long-time friends bury the hatchet and work together means we won't have to see two sides doing the same work at the same time, which might tighten up the storytelling going forward.

Finally, killing of Kahlil means Jennifer has to move forward. One, she doesn't have this boy tying her down any longer, but it also seems to be pushing her to learn her powers more, to one day become the superheroine Lightning (and we know she will, someday, since she already has a costume designed by the producers, so it will eventually happen). If all three meta-humans in the Pierce family can become heroes, it will justify all of them being on the series. 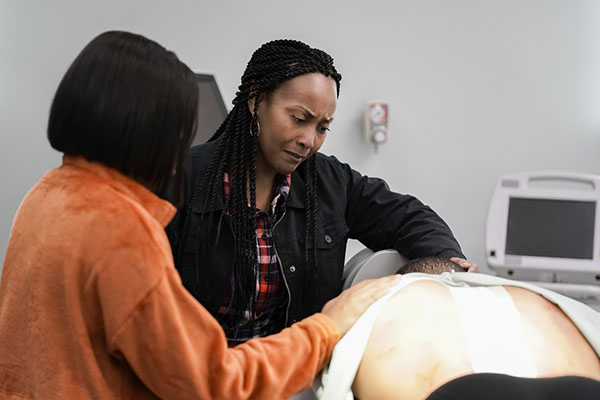 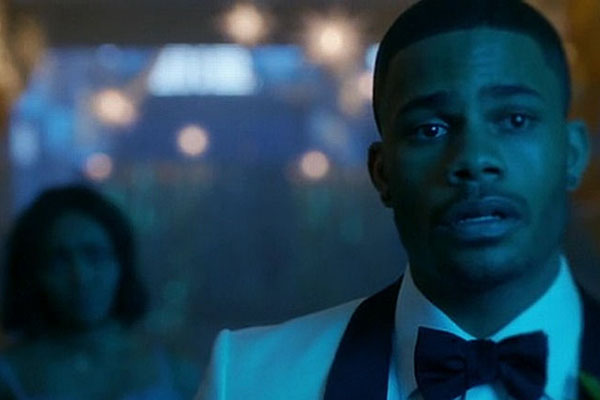 The mother, Lynn, though is still boring. They seriously either need to give her more to do or find a way to elegantly write her off the show. She's a nothing character dragging all her scenes down.

This close to the end of the season (Black Lightning is only going 16 episodes for season two), I don't know if the series can pull itself out of the much and finally tell a good story. I keep hoping, but each week the series continues to be bogged down in bland storytelling. The show need to become more fun and more interesting, as right now it's the weak link in the CW's superhero lineup.