...And Also Aqualad and Boy Thunder and the Incredible Shrinking Girl And...

I think it's fair to say that the first season of Titans (featured extensively in our 2018/2019 write ups of the ArrowverseWhen it was announced that the CW was creating a show based on the Green Arrow, people laughed. The CW? Really? Was it going to be teen-oriented like everything else on the network and be called "Arrow High"? And yet that one show, Arrow has spawned three spin-offs, various related shows and given DC a successful shared universe, the Arrowverse on TV and streaming.) was a bit of a mess. Clearly the producers on the show wanted to tell a dark and gritty (and, really, a bit scary) tale about Dick Grayson and Raven, about both of them coming to grips with terrible father figures while, also, trying to stop Raven's evil, demonic father, Trigon, from coming to Earth and destroying all of creation. At times the show was able to stick to this storyline, but it also wandered, meandered, lost focus, told a lot of side stories about Wonder Girl, Hawk and Dove, the Doom Patrol, and just about everything else it could be finally, eventually, getting to Trigon... and then using the Big Bad as a cliffhanger for the next season. In short, it was a lot of bait and switch. 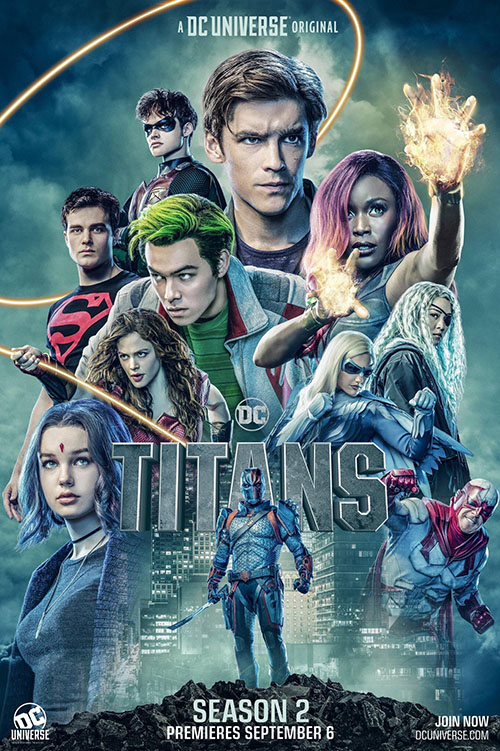 That's not to say it was all bad, as Titans had a lot of good things going for it. It had great performances from all its leads, an interesting take on many of their stories, and it did commit to that dark and gritty feel (sometimes it maybe committed too hard, to be honest). While it needed to find a way to improve itself in its second season, it was fair to say that the bones of a good show were there. For the first attempt from DC ComicsOne of the two biggest comic publishing companies in the world (and, depending on what big events are going on, the number one company), DC Comics is the home of Superman, Batman, Wonder Woman, and just about every big superhero introduced in the 1930s and 1940s. to make a TV show on their then-new, DC Universe platform, is seemed like a success. And in comparison to its Arrowverse brethren, of which the series shared show runner Greg Berlanti, it was miles above those other shows.

Curiously, to "fix" itself in second season, Titans all but rebooted itself. Step one was to finish off the Trigon storyline (something that was intended for the first season until, for whatever reason, DC decided to push that season finale until the next year). Because Trigon had a year of anticipation behind him, it was assumed that he'd be a big threat, something to really make the Titans work for the season to follow. Instead, his threat was tied up in the first episode of the second season in a casual, off-hand way. There was a lot of build up in first season about how Hawk and Dove needed to get to Raven and Robin, how the team had to come together and only then could they defeat Trigon. But none of that came to pass in the second season premiere. Instead, Raven takes on her dad alone, unleashes a big cloud of CGI magic, and faster than you can say, "let's just rush this wrap-up", Trigon was done. It was, needless to say, pretty anti-climactic.

In Trigon's wake the team moves to Titan's Tower in San Francisco so they can restart the Teen TitansStarted in The Brave and the Bold back in 1964, the Teen Titans were a supergroup formed of the younger sidekicks of the more famous heroes in the DC Comics line. Over the years the team has been reformed, rebooted, and relaunched, but always with that basic premise in place.. For those of us that watched first season and don't recall any reference to the fact that there was a previous version of the team, that's one of the many little retcons the second season gives us to try and expand the story and reboot the tone of the series. Instead of the dark and gritty tale from the first year was have something brighter, more hopeful, more colorful. The team all gets their costumes, the heroes all get to try and figure out "what it means to be a hero", and they get to battle a new (old) villain: Slade Wilson, aka Deathstroke.

If you've watched any of the Arrowverse (let alone other DC productions like the DC Animated Movie UniverseWhile DC Comics was amping up production on this big "MCU-killer", the DC Extended Universe they were also quietly putting together another shared movie continuity, the DC Animated Movie Universe. This series was more closely related to the comics, directly adapting a number of famous storylines to, arguably, better effect than the live-action movies could.), you probably are somewhat familiar with Deathstroke, a hired assassin with super powers that make him terribly efficient at his job and even harder to kill. He's, classically, a villain of the Titans, a primary antagonist (especially once that role, for many younger fans, was cemented in the 2003 animated series). If you have a production of the Teen Titans, you have to have Deathstroke. 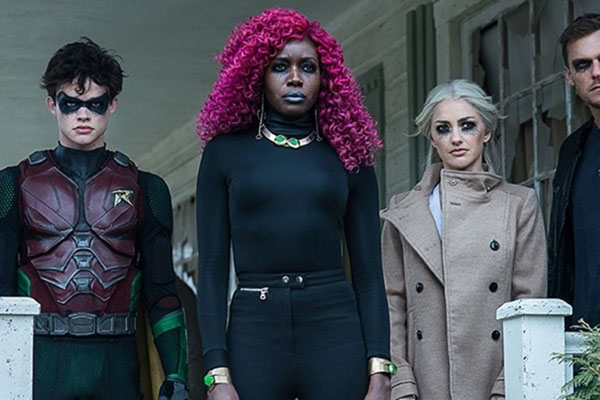 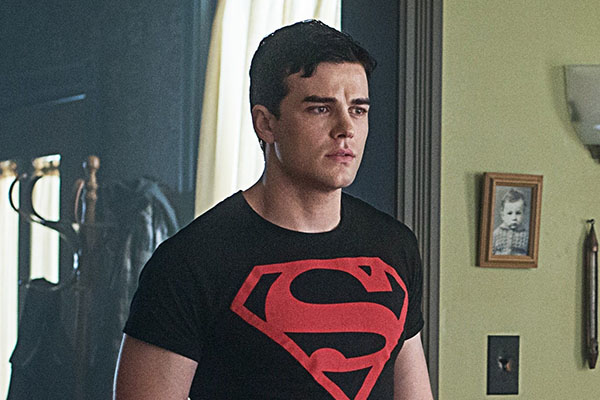 And the thing is, I actually liked the story they told for Deathstroke. He was tough, he was menacing, he seemed like a proper, unbeatable foe. They managed to work a bunch of his related characters into the show, like his son Jericho and his daughter Rose, and gave them all enough build up that the entire clan felt like fully realized characters. Hell, this was probably the best version of Deathstroke I've seen in any of the DC properties (edging out the Arrowverse version handily). But the problem is that the Deathstroke they give us here, dark and hard and very evil, is a weird fit for the rest of the season. He feels like a version of the character meant to show up in season one, but season two of the show took a lighter tone and style with its characters and Deathstroke here just doesn't fit (not matter how many times they put him into his own bright and colorful two-tone armor).

The, basically, became a little awkward, trying to serve two masters and never quite nailing either. On the one hand we have Deathstroke, dark and furious, and he has a fantastic story that ties well into the Titans. He wants revenge for the perceived sins of the Titans, for the way they befriended his son, Jericho, which eventually lead to Jericho's death (although I'll save the details of that in case you want to watch this season for yourself). Deathstroke causes a lot of carnage, bloodshed and violence, and he'd fit perfectly into the first season of the show, no doubt.

And then, on the other hand, you have the back-story of the original Teen Titans team, their bright and happy costumes, their lighthearted adventures, their happy family (a subject that is name dropped, over and over, by everyone in the show included Bruce Wayne). It's hard to mesh the dark and nasty Deathstroke, who I really liked, with lighthearted adventures of Beast Boy and Superboy (who is introduced this season). Even the show struggles with it, often turning on a dime for light comedy into dark tragedy, awkwardly and with little grace. Sometimes the show brings it all together, like in the back-story of the Titans and Jericho, which is a part of the story I loved. Other times you have moments like Beast Boy getting captured and experimented on by Cadmus (yet another villainous group shoehorned in this season) because... reasons.

The show has a lot of story it wants to tackle and, week to week (or episode to episode if you binge this all at once), you're never show what kind of tale you're going to get. The tone of the show is all over the place, with some episodes being brilliant, striking the right balance, while others fail over and over again. Characters get mad, wander off, have pointless side plots, and then come wandering back to the tower again because where else are they going to go? The show is "Titans" so, eventually, all the Titans have to come back together because otherwise there wouldn't be a show. 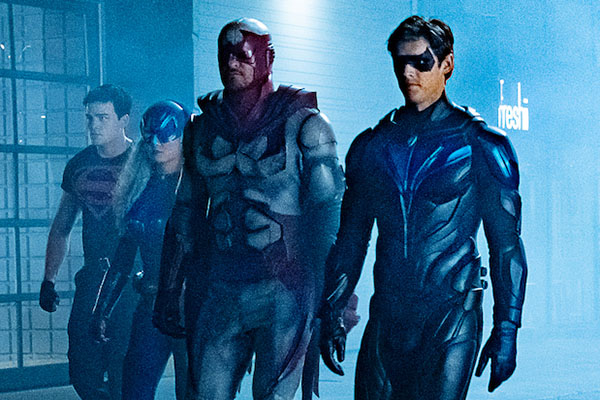 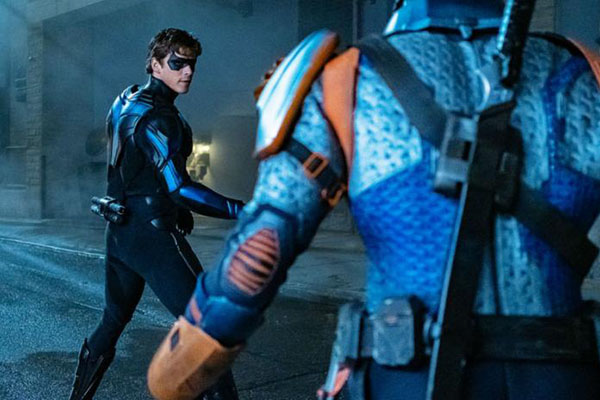 Really, I think the big issue is that the show has a lot of plot it has to churn through to reboot itself, to take on a new from from the dark and uneven first season. It adds in more characters, more story, more villains, more directions for the show to go, and tries to cover all of it. And while I do think a number of these threads work -- I've already raved about Deathstroke, but I also like Superboy, and Beast Boy is always a charmer on this show -- none of it truly comes together, not even by the season finale. Titans is always just a step away from greatness but also always manages to bungle it right at the worst times.

And that means that, here at the end of season season (looking ahead to the already announced third) the show is basically in the same place it was at the end of first season. It has all the bones to be a great show. If it can just find a way to mesh everything properly, to make all the characters and idea gel together, it could be great. Maybe now that all the character introductions and heavy back-story lifting is done we can finally get to work on watching these heroes work as a team. Of course, you basically could have said the same thing at the end of season one of Titans, and look where that got us.