Superhero movies have a villain problem. More often than not the villains featured in the stories are nowhere near as interesting as the heroes. The best villains are the ones given time to develop, to really become the focus of their stories in an organic way, like the Joker in The Dark Knight or Killmonger in Black Panther; when a great villain is put into a movie they're able to hold the attention of the audience, sometimes even better than the hero can. The hero is a known entity (especially by their third or fifth film), but a good villain, even if it's their first time showing up, can elevate tired, same-old material and make it seem fresh again. 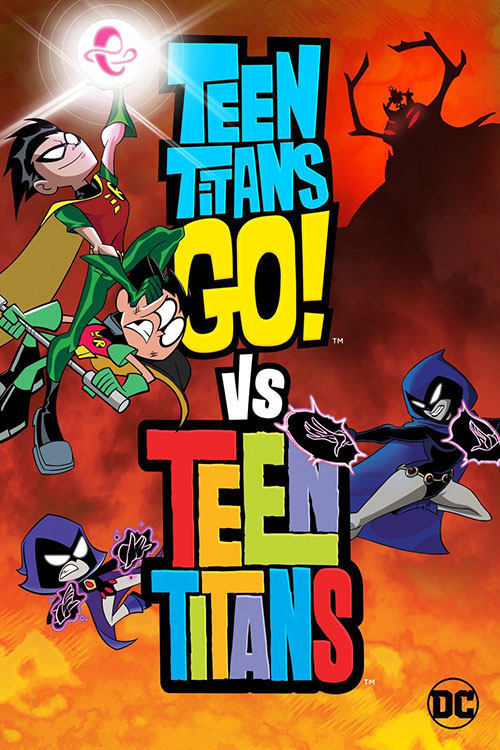 A bad villain, though, can ruin a movie. There are countless superhero films out there with terrible villains -- Iron Man 2, Wonder Woman, Hellboy II: The Golden Army -- and no matter how good the movie may be around the heroes, a bad villain can sink a film just a much as a good villain can elevate it. The best stories feature not only a good hero and a strong overall plot but a great villain to bring it all together. Even the recent Wonder Woman: Bloodlines shows that, more often than not, comic book movies don't understand how to create interesting villains with good stories.

I mention all this because I wasn't expecting Teen Titans Go! to actually get right what so many other films get wrong. For those unfamiliar, Teen Titans Go! is essentially a parody of the rest of the DC Universe. Although ostensibly using the same team as the 2003 Teen Titans series, the newer Go! is, in every way, as far from that beloved series ad you can get. It's loud, it's crass, it's dumb, and it's oh so hilarious. The thing that Go! gets right is that it doesn't take itself at all seriously. It has a go-for-broke attitude that permeates every second of the show. The series, really, just doesn't care at all and if an idea seems amusing to the writes and animators, it's committed to celluloid. It's amazing.

Fans of the 2003 Teen Titans hate Teen Titans Go! because, in their eyes, their beloved series was killed so that it could be replaced by an inferior series. Never mind the fact that the 2003 series was off the air for seven years before Go! came along, or that in the same span DC launched who knows how many other versions of their characters (there's also the DC Extended UniverseStarted as DC Comics' answer to the MCU, the early films in the franchise stumbled out of the gates, often mired in grim-dark storytelling and the rushed need to get this franchise started. Eventually, though, the films began to even out, becoming better as they went along. Still, this franchise has a long way to go before it's true completion for Marvel's universe., DC Animated Movie UniverseWhile DC Comics was amping up production on this big "MCU-killer", the DC Extended Universe they were also quietly putting together another shared movie continuity, the DC Animated Movie Universe. This series was more closely related to the comics, directly adapting a number of famous storylines to, arguably, better effect than the live-action movies could., ArrowverseWhen it was announced that the CW was creating a show based on the Green Arrow, people laughed. The CW? Really? Was it going to be teen-oriented like everything else on the network and be called "Arrow High"? And yet that one show, Arrow has spawned three spin-offs, various related shows and given DC a successful shared universe, the Arrowverse on TV and streaming., Young Justice, Superhero Girls, and on and on). Fanboys, in short, are stupid and we should just ignore them. The one thing they have right, though, is that Teen Titans Go! is not the 2003 Teen Titans. And that's where the merits of their argument end.

With all that information laid out, let's go over all the things Teen Titans Go! vs. Teen Titans gets right that so many other superhero movies fail to accomplish, leading this new adventure to, honestly, be the best animated movie DC ComicsOne of the two biggest comic publishing companies in the world (and, depending on what big events are going on, the number one company), DC Comics is the home of Superman, Batman, Wonder Woman, and just about every big superhero introduced in the 1930s and 1940s. has put out. It's that good, largely because it's silly, crass, stupid, crude, dumb, and all the things you expect from Teen Titans Go!. Instead of trying to act "up" to the 2003 series it drags that series into the silly mud with it and the movie is better for it. It revels in all the things Go! is able to get away with, and yet also manages to be one of the biggest, most epic superhero films I've seen in a long time (and I watch superhero cinema regularly). 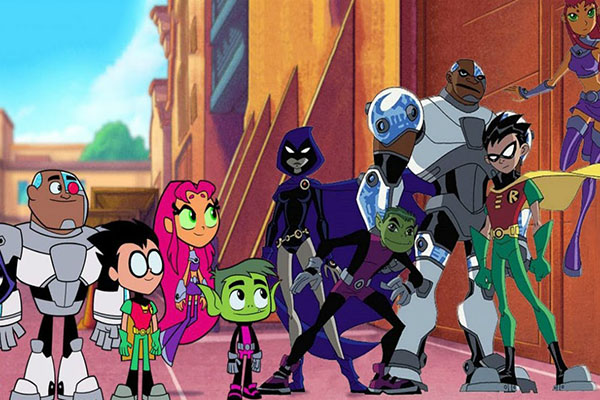 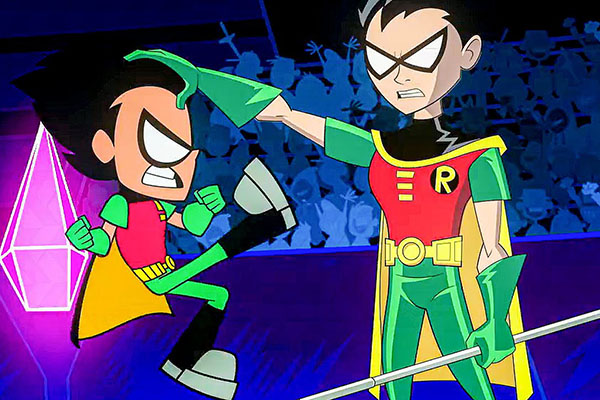 In TTGvTT (because I'm tired of writing it out), the Go! team is called into deal with a bank robbery lead by one Gentleman Ghost (voiced by "Weird Al" Yankovic). In the process of stopping the robbery, Raven's forehead gem, the thing that keeps her demonic side in check, cracks. She starts to become more and more demonic and, wouldn't you know it, her fully demonic father, Trigon, shows up right around this time. He offers to take her demonic side, leaving her a powerless human, but she resists, not trusting his motivations. And then things get complicated.

First, a giant spaceship appears about Titans Tower. Then, five stealth warriors dive into the tower and kidnap the Go! team. They take the heroes up to the spaceship where it's revealed that everyone is to take part in an arena battle, Teen Titans (Go!) versus Teen Titans (2003). The battle, though, is just a ruse as, in reality, everything is part of a plan to steal Raven's demonic powers so that Trigon (Go!) can resurrect Trigon (2003) and the two can conquer the universe together. And, once the two teams stop bickering and actually start working together, it's going to take all the Teen Titans (and I do mean all of them) to stop this combined threat.

While I'm sure the 2003 fanboys are probably happy to see their team again at all, I'm sure this isn't the movie they were hoping for. The emphasis is on the Go! team and that team never elevates themselves to the seriousness of the 2003 squad. Really, using the 2003 team is just an excuse to introduce the multiverse into this movie and use the Infinite Earths of DC Comics for hilarious effect. While the fans likely wanted to see one more fight between the classic Titans and Trigon, I doubt they wanted it bookended by a battle with Santa Claus and a Kaiju battle of UltraRaven versus MegaTrigon. It's stupid, but it's also amazing.

Getting back to my first point, TTGvTT goes out of its way to establish Trigon(s) as a legitimate threat. Using a villain the series has introduced before is a smart move as any fan of the Go! series will already be familiar with the villain and his various machinations. Better, the two Trigons have amusing banter together and really managed to elevate each other in the silliest ways. This helps to establish them as interesting characters, ones the audience can invest in, and then when they start their true plans and begin unleashing their power, we can respect the villains in a way we can't with so many other villains in so many other movies. This film manages to nail the villains by investing in them and is stronger for it. 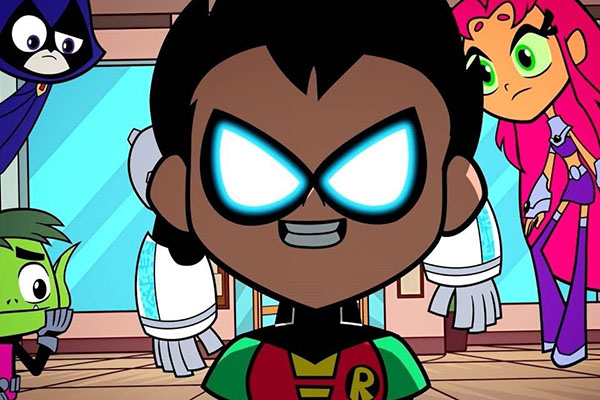 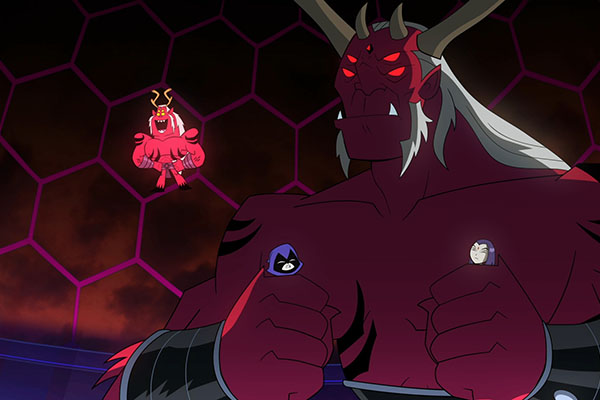 But then this film also manages something else other films and shows can't: the big battles between heroes and villains feel appropriately epic. Over time the powers on display increase, the dangers get worse, but nothing ever gets repetitive or feels unfair. And then when the heroes come up with a new plan, find a new way to tackle the problem, it feels earned. And that helps to pay off the big, elaborate action sequences, selling the material successfully every step of the way. How this silly little show can get it right when the big-budget Hollywood movies can't is astounding to me.

And, let's face it, there's no end to the thrills of seeing all the Teen Titans working together (and, again, without spoiling it too much, I do mean "all" of them). Go! has setup, over the years, a number of possible Teen Titans teams and this movie manages to call back to all of them (among all the other callbacks this series makes). The film pays off for fans of the series, referencing all kinds of gags and jokes from over the years while still finding new wrinkles to add, new ways to build up jokes and action and make it all pay off.

Really, I have nothing bad to say about this movie. From the start of the movie, with the epic opening sequence through all the silly scenes and big action set pieces, Teen Titans Go! vs. Teen Titans has a confident and assured perspective to sell and a fun story to tell. This movie pays off in ways other superhero movies simply can't match, and it does it all in a little, direct-to-video production. If only more big superhero movies could learn from this film; certainly they'd be better for it, and much, much funnier in the process.