What Have You Got Against Elves?

To be fair to the original Hellboy, which the movie is a bit of a mess it is also pretty fun. For a superhero film made before the dawn of the age of the Marvel Cinematic UniverseWhen it first began in 2008 with a little film called Iron Man no one suspected the empire that would follow. Superhero movies in the past, especially those not featuring either Batman or Superman, were usually terrible. And yet, Iron Man would lead to a long series of successful films, launching the most successful cinema brand in history: the Marvel Cinematic Universe., Hellboy is actually pretty solid in its design and action. Plus, it does the one thing that Marvel later staked most of their movies on as well: a good, central performance to anchor the film. It's a strategy Marvel lucked into with Iron Man, and it's proven to pay dividends. 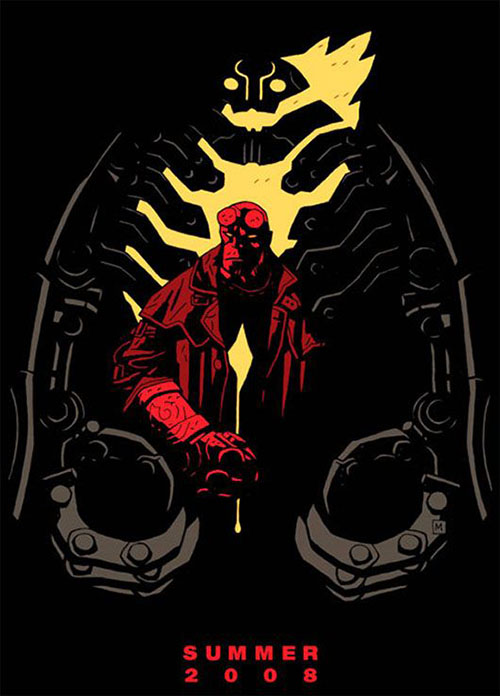 Unfortunately a good performance can't save a terrible film, and Hellboy II: The Golden Army is just such a movie. While the first film was a bit of a mess in places (especially in the last act), Hellboy II is all over the place, start to finish. It never quite settles down to tell one cohesive story, instead flitting from one set pieces to the next. Tonally, and artistically, the film is all over the place. While the original film may have it's detractors, it's Hellboy II that really showed how bad the franchise could get.

Picking up some time after the end of the original film. Hellboy (Ron Perlman) and Liz (Selma Blair) are an item, living and working together within the BPRD. Their relationship is strained, though, because Red is basically a man-child, not really paying much attention to her, or their living quarters, or any of his responsibilities. This also puts a strain on his working relationship with the BRPD as Hellboy can't take his duties to the secret organization seriously. When an evil Elf price leads an attack on an auction house (to reclaim part of a golden crown that he can use to control an immortal army of goblin-made golems), Hellboy uses the confusion as an excuse to publicly out the BPRD, taking the "secret" out of the secret organization. Now Hellboy, Liz, and Abe Sapien (Doug Jones, both in performance and voice) have to find the lair of the Golden Army and find a way to stop the prince before he unleashes the fury of the Elves on the human world.

The first issue I have with Hellboy II is that most of the story background -- Elves, Goblins, Trolls, and their whole secret world -- comes out of nowhere within the context of the universe the first film had already established. While, yes, there was already demons and warlocks, elder gods and magic within the universe, Elves and their secret world add yet another layer of complexity to the whole affair, and it feels like it comes out of nowhere based on what we saw in the first film. Despite the magic and demons, much of the first film was grounded in the history of Earth as we know it. To add this whole other world beneath, one that seems to exist throughout human history and would, by context, have changed many events we know, seems like a step too far.

Beyond that, though, is that the fact the world of these fantasy creatures isn't really well developed at all. We're told all these fantastic creatures exist but the only taste we get of them is one secret black market and then it's back to the BPRD. It's like if a Harry PotterFirst released as a series of books (starting in the UK before moving worldwide), the Harry Potter series gained great acclaim before even becoming a series of successful movies. Now encompassing books, films, a prequel series, and a successful two-part play, the series even now shows no end in sight. movie took place at Diagon Alley, the wizarding street of shops, before just going back to Harry's backyard fort to tell the rest of its story (which sounds more like a South Park RPG and, yes, I would play that). The film introduces all these new creatures and concepts to its world and then barely does anything with it. 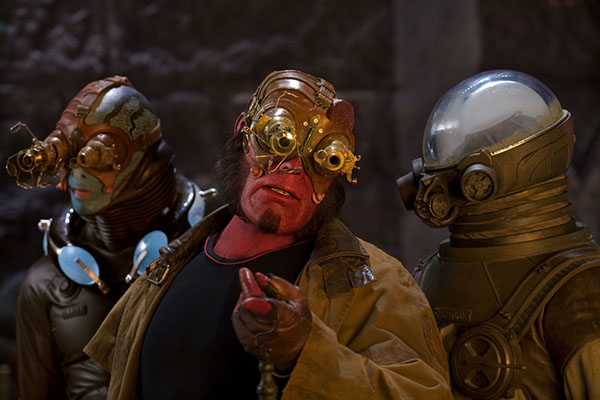 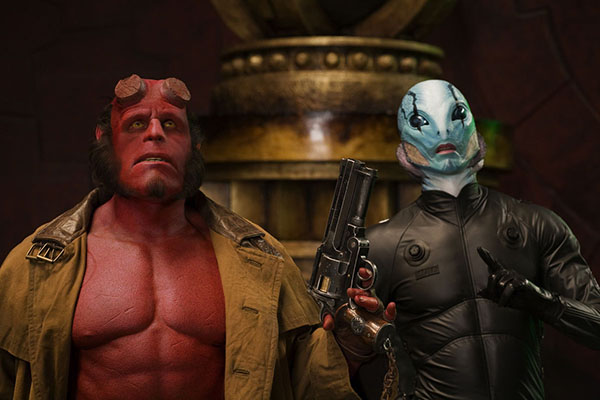 Honestly, the film just feels so small. Despite the fact that the film has a larger budget than the first movie it doesn't feel like it does nearly as much with the money. There's less action, less set pieces, and less going on. The story is very linear without any context or nuance thrown in to give anything needed shading or depth. If we could just learn more about this new world, it would make the places we see and creatures we meet within mean more.

The characters, too, are given the short-shrift this time around. The villain, the Elf prince, Nuada (Luke Goss), hates humans because they're humans (which, okay, that's fair -- most Elves are racists). He's been holding this grudge for over a thousand years, even since an ancient war with the humans. The thing is, though, that everyone else in Elvish society, his father (the king) and sister included, have forgiven the humans and learned to live and let live. So why is the prince so gung ho for a war after all this time. We're never told why the prince has such a deep and unrelenting hate for humans, just that he does. Without that content the prince isn't a villain we can care about one way or another. He's supposed to be this great evil but he just comes across like a petty child, like Joffrey from Game of Thrones under heavier makeup.

Not that his sister is treated any better. Like Liz here (and in the first movie), the princess, Nuala (Anna Walton), is basically bait for both the heroes and villains. She doesn't have any agency of her own, instead simply running from her brother to keep the crown out of his hands. She ends up with the heroes simply because they're there, and then serves as a love interest for Abe so he can have a deeper plot. We never really learn anything about her, just things that help shade Abe as a character.

Which, yes, is exactly how Liz is treated as well. Here she's the continuing love interest for Hellboy as well as the nagging shrew when he steps out of line, and the prize he can win if he just learns to be more mature. Except he never learns to be more mature, not even when he's near death, and yet Liz risks everything, including the fate of the world, to save him. At every turn Liz should dump his ass because he's an emotionally stunted jerk, but she wraps her whole life around him for seemingly no good reason. 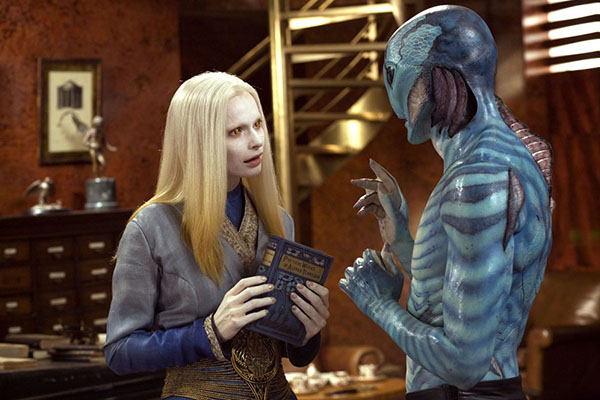 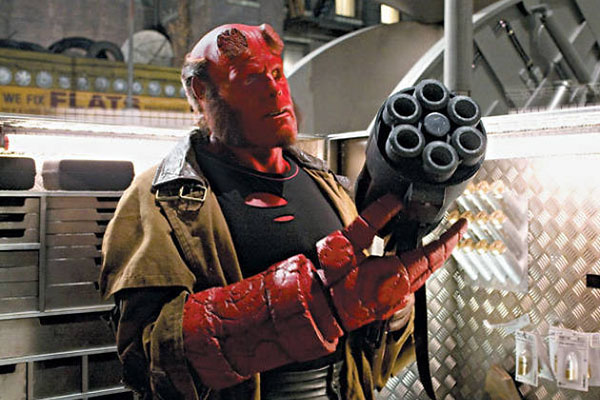 Hellboy, honestly, is the worst in this film. What was an amusing shtick the first time around -- the happy-go-lucky demon that just wants to live life and fight demons -- has some morphed and twisted into a guy who barely takes care of himself and doesn't think of anyone else but Big Red. He ignores Liz, mistreats her, and does everything he can to annoy her. And then, when she tells him that maybe they should spend just a little time apart to figure things out (right before she gives up on that and immediately takes him back), he goes off, gets drunk, and learns nothing. I like Ron Perlman as Hellboy, and he tries his darnedest here, but damn if the lead character of this movie isn't a prick.

About the only character I really like is Abe Sapien. He's intelligent and emotionally rich, played with perfection by Doug Jones. I honestly don't know why they overdubbed him with David Hyde Pierce in the first movie as the two actors don't really sound all that different. Having Doug give an emotional performance as well as a physical one unifies the whole performance, making Abe into the strongest, most realized character in the piece. Again I just wish Abe had been given his own movie, although, come to think of it, he kind of did. It's called The Shape of Water, also featuring Doug Jones as a fish-man.

There's really nothing to invest in or care about in this movie. Scenes happen, heroes run around, and then eventually the movie ends. At no time, though, do you ever really care. The movie may be a feast for the eyes, as returning director Guillermo Del Toro does know how to craft visually stunning movies, but it's pretty much junk in any other way. It's better if we just pretend this film doesn't exist.