As I've noted in the past, I'm a fan of DC ComicsOne of the two biggest comic publishing companies in the world (and, depending on what big events are going on, the number one company), DC Comics is the home of Superman, Batman, Wonder Woman, and just about every big superhero introduced in the 1930s and 1940s.. I care more about the characters and stories from that company than I do Marvel Comics. While I will dabble in Marvel upon occasion, and even more infrequently look at other, indie comic brands, I don't tend to venture outside of DC. That's part of the reason why, before the movie came out in 2004, I hadn't even heard of Hellboy before. I didn't have a knowledge base for the character nor any frame of reference for his stories. I just knew he was a big red dude who, apparently, fought crime (and I learned all that from the trailer). 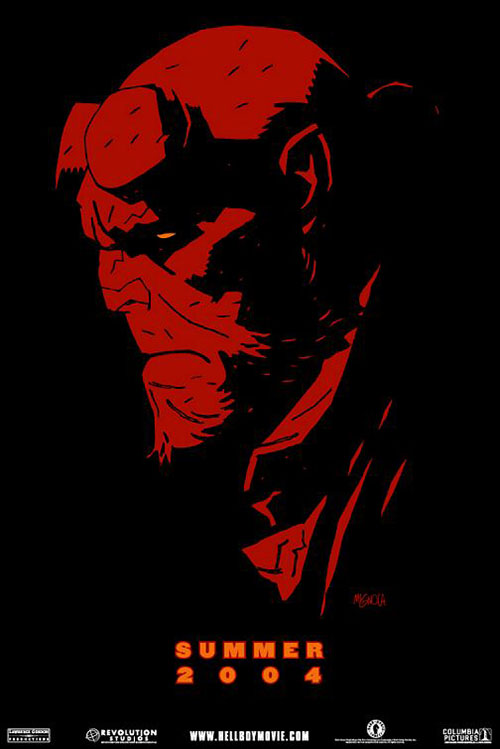 That said, even if I had been a fan of Hellboy and his cronies over at the BPRD, I still might not have liked the 2004 film. From what I can tell the film wasn't exactly true to the original stories. Sure, the character's back-story is the same, but new plot lines were added in (including a love story that wasn't in the comics originally), to create something new. I'm certainly not opposed to reinventing stories for new media, but I'm sure some of the things would have ventured too far for my tastes. Pleasing the geeky fandom can be like walking a tightrope, and I know I'm just as bad about that as all the other nerdlings I throw shade at.

Still, if you can get past the fact that the movie isn't exactly like the comics (or that doesn't bother you at all), then Hellboy is a pretty enjoyable movie. It has a good cast, a strong art style, and solid direction from Guillermo Del Toro, all building up to a movie that works despite it's low budget and simple premise.

Back in 1944, during the height of the Second World War, the Germans, with the help of the seemingly immortal Rasputin (Karel Roden), seeks to raise an army of monsters for their foul machinations. The Allies, with Agent Trevor Bruttenholm (Kevin Trainor in this flash back, and then John Hurt for the rest of the film) find the secret site for this dark ritual and prevent the Nazis from finishing what they started. Rasputin is seemingly killed and the gateway to a dark dimension is sealed behind him. However, one creature made it through: Hellboy (as a CGI infant here, played in the main part of the movie by Ron Perlman). The Allies take the little demon-baby in and he's raised by Bruttenholm as his son.

Cut to years later and Hellboy (he of the red skin, broken horns, and powerful, rocky right hand), along with psychic fish-man Abe Sapien (played by Doug Jones, voiced by David Hyde Pierce for no good reason) and firestarter Liz Sherman (Selma Blair), fight demons, creeps, haunts, and anything else paranormal as part of the Bureau of Paranormal Research and Defense (BPRD). They're call to the scene to deal with a magical monster that's been eating people at a museum, but this case soon proves to be much more than that. It ties in to Rasputin, the Nazis, and that fateful night back in 1944. Hellboy and his colleagues will have to figure out where to go, what to do, and how to stop it before Rasputin reopens the gates to hell and unleashes an apocalypse. 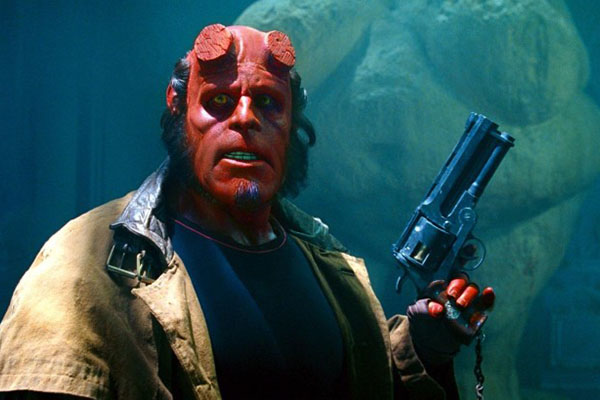 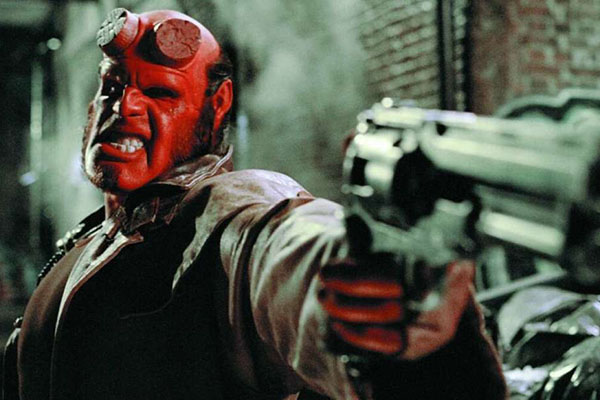 Easily the best part of Hellboy is Ron Perlman. The actor has a lived-in charm with the character, this despite it being his first time in the red makeup and prosthetics. Acting under all that gear isn't easy for the best of actors, but Perlman makes it look like nothing. He's fun as the lead role and he clearly enjoyed every minute he got to play as this big, goofy, demonic superhero.

That said, much of what goes on around Hellboy at the BPRD just sucks. While I loved Hurt in this movie, he doesn't really have much screen time. More time is given over to Hellboy's new handler, John Myers (Rupert Evans), an everyman character brought into this film to act as an audience surrogate. He's boring and underwritten but, thankfully, he's ditched by the time the sequel rolls around. Less easy to get rid of, though, is Tom Manning (Jeffery Tambor), governmental liaison and oversight for the BPRD. As played by Tambor, Manning is just an obnoxious gas-bag, someone that should get killed off five minute into the mission and yet, somehow, sticks around for two whole movies. Neither of these characters are interesting, or charming, or do anything to justify their existence, but way too much screen time is devoted to them.

Instead of these characters it would have been great to have more time with Liz, Hellboy's love interest, or Abe Sapien. Abe is a great character, acted very well by Doug Jones (who gets to play a fish man, live, three times since he did both these movies plus The Shape of Water, so clearly he has a type). Smart and witty, but with a deep soul, Abe could be the focus of his own movie but, sadly, he get relegated to the back bench half-way into the movie so that more time could be devoted to Myers. And while Liz at least fares somewhat better, getting more screen time, the character is constantly dangled in front of Hellboy as a prize. Save her here, save her there, show her how you love her. Liz is never really able to gain her own agency, instead simply acting as a prop for Hellboy.

It's sad, too, because Blair has great chemistry with the rest of the cast. If her character hadn't been forced into the role of a love interest, she might have been given more to do on her own. Her character is powerful, with awesome pyrokinetic abilities, and if the movie would have just given her a mission to do with them, instead of acting as backup for Red, she could have been a much stronger character. 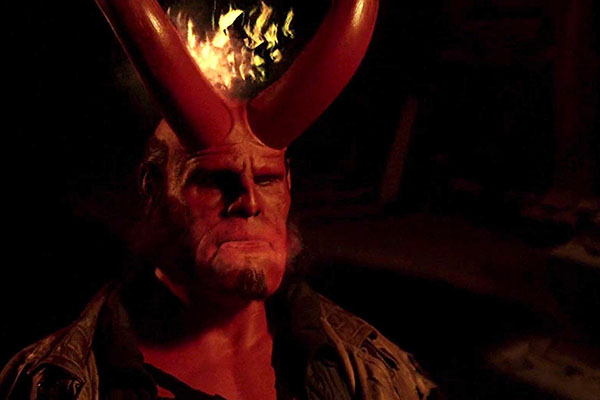 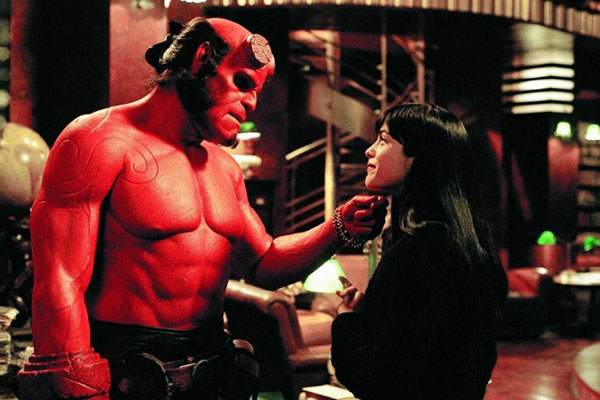 So we're left with hellboy and his antics to anchor the movie; I'd say it works about 80% of the time. The movie can very nearly skate by completely on the charm of Perlman and the artistic aspirations of Del Toro. For much of the runtime the film can just be a goofy, but pretty to look at, lark with Perlman grinning and mugging through scenes and it works. But then we get to the ending where Hellboy has to deal with Rasputin and his band of underwritten flunkies, and the film looses all its energy. It goes from a weird superhero riff to this Indiana Jones motif -- not just because of the Nazis but also because the team ends up exploring an ancient Russian temple -- the energy of the movie changes. It becomes less funny, less enjoyable, and just a slog in general.

Hellboy is ultimately a fun but very uneven movie. If it didn't have Ron Perlman in the lead role then it probably would have been a complete disaster. As it stands it's fun to watch but its not really something you can get invested in. And, if by the end of the film you've kind of tuned out completely, fear not. That's normal.