Strange Things Are Afoot at the Circle K

I've been running this site again for a while now, long enough that at some point I should have already discussed Stranger Things. When it arrived on the NetflixOriginally started as a disc-by-mail service, Netflix has grown to be one of the largest media companies in the world (and one of the most valued internet companies as well). With a constant slate of new internet streaming-based programming that updates all the time, Netflix has redefined what it means to watch TV and films (as well as how to do it). scene back in 2016 the Internet (and, really, the rest of the world) blew up about it. The show was discussed with the same breathless anticipation as Game of Thrones, capturing the minds of so many people. Naturally, being the cranky hipster that I am, I resisted watching the show because (a) I hadn't heard about it already and (b) a lot of people were already into it. I wasn't able to muster the energy to care about the show when its first season premiered and didn't get around to watching it for a couple of months. 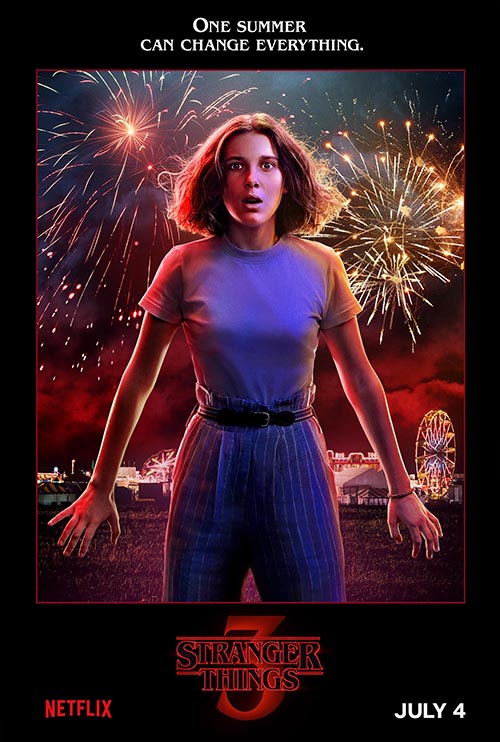 Once I did finally settle into the show, it just struck me as kind of okay. Don't get me wrong, there's fundamentally nothing wrong with the show. It's tale of four young friends -- Mike Wheeler (Finn Wolfhard), Dustin Henderson (Gaten Matarazzo), Lucas Sinclair (Caleb McLaughlin), Will Byers (Noah Schnapp) -- finding a super-powered girl, Eleven (Millie Bobby Brown), and then getting sucked into a number of scary and fantastical adventures, and its interesting enough. The show has some cool ideas and is plotted well enough to never drag or get too mired in its own mythology. The real problem I had with the show as that it wasn't really giving me anything new. Government experiments, shadowy horror, and 80s nostalgia had all been covered many times before (Goonies, It, and Super 8, just to name a few) that it never felt like Stranger Things had a new perspective on the formula.

Put another way, in the first season the show had memorable moments without really being memorable. Eleven is an interesting character -- a science lab experiment given super powers by her own father so that she could psychically connect to people and places as well as move and destroy things with her mind -- but her performance (by grace of her story) was stilted and limited. The show plays around with an alternate dimension sitting on top of ours, a shadowy place called the "Upside Down" but never really spends enough time in there from our perspective for us to truly understand everything going on over there. And, sure, the sequences with people trying to communicate with the other side was iconic (the holiday lights on the walls was truly memorable), but that's really all I remember about the season. Some stuff happened, everyone was safe by the end, and that was that.

Cut to a few months later and season two brought us right back into the word of the show with a tale that, honestly, felt like a retread of the first season. I have friends that are super into the show and they can't really remember much about the season. There were, again, iconic moments -- and entire episode devoted to other mutant kids was interesting, and the only part of the season I really remember, but it was also an episode that didn't connect to the rest of the season and, ultimately, went nowhere) -- but on the whole the season just didn't really come together. it was fine enough to watch, and I enjoyed it for what it was, but I wasn't craving more Stranger Things after I was done with it.

That might explain why I waited over a week before bothering to load the third season (I spent most of that time devouring through all three seasons and a movie of Veronica Mars before finally getting around to watching this show for the site. Everyone else was going on about it but I just couldn't muster the energy to care about another season of The Goonies (But Slightly Different). And yet, third season surprised me. This was a show I could finally halfway get into, something I actually found myself genuinely enjoying despite my misgivings over the show. 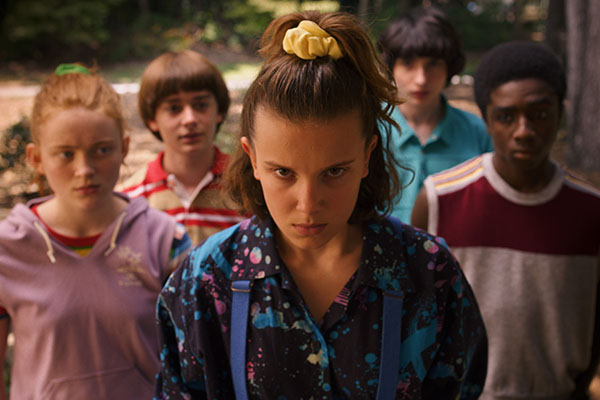 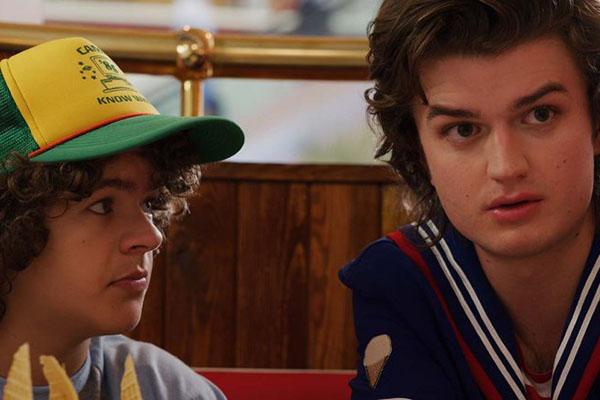 Part of why I enjoyed the third season of the show was that it at least tried to mix things up further and push its whole concept out. At the start if third season we learn about a secret Russian plot to open their own doorway to the Upside Down. While their initial experiments fail, the Ruskies are eventually able to open a gateway after moving their lab over to Hawkins, Indiana. Hawkins is, of course, the site of the first two seasons of the show and, wouldn't you know it, all the kids from the previous seasons begin to notice the strange things going on. The beasts from the Upside Down start to infiltrate our world again, and the big demon in charge of that realm (what the kids call the "Demogorgon" as they're all D&D nerds) lays out his own designs for super-powered girl, Eleven. The gang breaks up into packs, each finding their own way through the story as demons and Russians infiltrate their town and cause all kinds of havoc.

The first two seasons had played the U.S. Government as a (possible) bad guy, but this season swaps them out for evil Russians, a characterization that might have been a little too easy to make (sure, it was the Cold War during this show's setting, but not all Russians were this cartoonishly evil) but it also works within the context of the movies Stranger Things is copying. The Russians add a bit of Indiana Jones-style flair to the show, some needed color and, really, amusing humor to the whole shindig. Plus it helps that two of the best characters on the show, Dustin and older jock teen Steve Harrington (Joe Keery), are paired up for the Russian side of the plot line. These characters are great, as are newer characters Robin (Maya Hawke) and Erica Sinclair (Priah Ferguson), who are added to this team and give needed personality to the proceedings. The Russian adventure is easily the highlight of the season.

It's weird because it's never really clear just what the Russians are getting out of their experiment. There's something about green goo (that's some kind of corrosive agent) and how it might be used as a power source, but nothing about their actions is made clear. That doesn't matter, though, because the Russians don't need to have their motivations explained. The fact is that having them explain everything they're doing would have been unneeded exposition that would have stopped the momentum of the show and dragged everything out. The show allows us to put together our own explanation for it (the U.S. did it first, so the Russians have to as well, maybe?) and then moves on because there are other matters to handle.

Really, everything about Dustin and Steve's Excellent Adventure makes the rest of the season pale by comparison, but that's not to say the rest of it is bad. By breaking up the characters into groups it allows Mike, Lucas, and Will to grow and evolve, too. We get to spend time with them as they act like idiot teenagers. Eleven goes off with Max (Sadie Sink, introduced in second season) to have girl time and we finally get to see these three guys on their own, trying to find their own path through the world. Without them immediately knowing all the crap going on in their town (they don't really get in on the story until the mid point) we can have a few good stories with them about friendship, relationships, and becoming adults, all without it feeling like another riff on The Goonies. These characters needed this time to evolve and change and, really, I'm glad they show gave us these scenes. 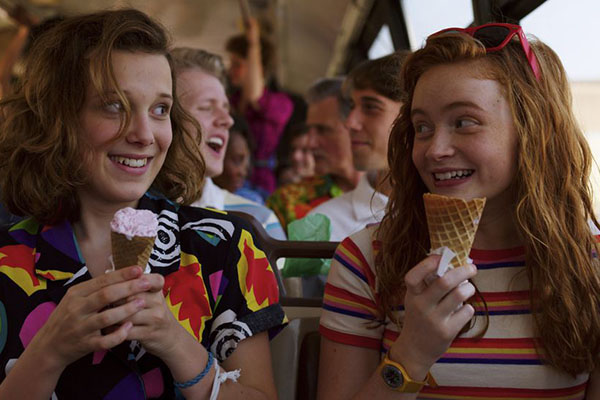 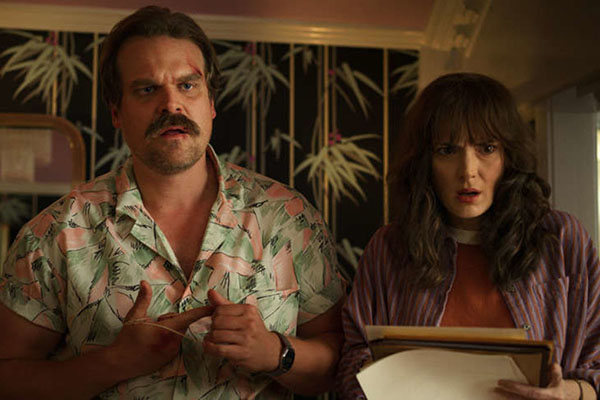 Similarly, by pushing Eleven away from Mike for a time (since her characters has essentially been tied to his hip since the two were pulled together in season one), her character finally got a chance to evolve as well. Max because helps Eleven find her own style, to find what it means to be Eleven (and to be a girl) without any of the guys (the boys; her adoptive father, chief of police Jim Hopper, played by David Harbour) dictating their own ideas and style to her. Max becomes a great friend for her which, in the process also deepens Max as a character.

Really, I enjoyed just about everything this show had going on this time. It was fleet, it was funny, and it put a lot of effort into deepening all the characters. Plus it found new, gross ways to involve the Upside Down and its major villain, the Demogorgon (creepy, cool effects I won't spoil here). Season three of the show finally managed to find the potential of the series and deliver upon it in a satisfying manner. It's honestly pretty great, start to finish.

That said, if you aren't already a fan of the show I don't know that season three is a great place for you to start. While it's certainly the best season of the show (so far), you would have to watch through the previous two seasons to understand all the story beats and intricate continuity. This isn't a show I'd suggest jumping into part way, but if the first or second season left you feeling cold then it might be hard for you to catch up so you're ready for season three. There's a lot you're going to want to know going in, but if you can get through the first two seasons (or are already caught up because you're a fan), then go to town. Season three of the show delivers, no doubt about that at all.