Looping Around to the Same Spot Again

I give NetflixOriginally started as a disc-by-mail service, Netflix has grown to be one of the largest media companies in the world (and one of the most valued internet companies as well). With a constant slate of new internet streaming-based programming that updates all the time, Netflix has redefined what it means to watch TV and films (as well as how to do it). a fair bit of crap about the low quality of their films. Not every movie the put out in bad -- Vampires vs. the Bronx, The Old Guard, and Fear Street, Part 1: 1994 all rate well in my book -- but for every good film they have the streamer also seems to have as many (if not more) crappy films, like Crouching Tiger, Hidden Dragon: Sword of Destiny or The Titan. 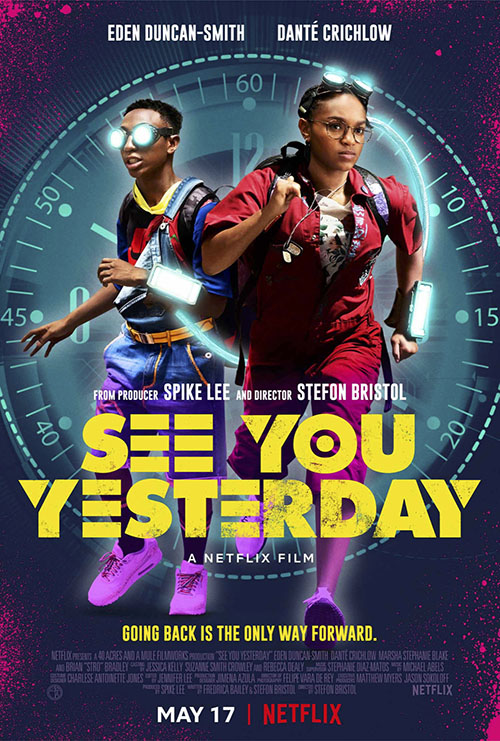 Thankfully onto the "good" pile we can add the 2019 time travel adventure See You Yesterday. I actually meant to watch, and review, this film when it came out, but I had a couple of other articles I had to tackle the week it was released, and then it slid right off my Netflix front page before I even had a chance to remember it. Only through a random browse of all of the streaming service did I even find this film, buried deep in the "Thrillers" section (which is absolutely isn't a thriller). It's sad that the film was so quickly ignored (and shoved aside) by the streaming giant because this is a solid little gem of a film that deserved to get more attention when it was released.

The film features two genius characters, C.J. Walker (Eden Duncan-Smith) and Sebastian Thomas (Dante Crichlow), as they work on their science project: time travel backpacks. Their early models haven't worked so well but they continue tweaking, all in the hopes that they can enter the packs into a big, upcoming competition and earn scholarships to get them out of the inner city. After a bit of tweaking, and advice from the science teacher Mr. Lockhart (Michael J. Fox), the kids get their packs working, and that allows them to jump back a single day and explore their neighborhood yesterday, all over again.

Their actions in the past, though, have a domino effect that changes their lives forever. A confrontation with C.J.'s ex-boyfriend, Jared (Rayshawn Richardson), plays out differently with the two teens in the past, and that event leads to a confrontation between Jared and C.J.'s brother, Calvin (Brian "Stro" Bradley), at the July 4 BBQ. Calvin and his friend, Dennis (Wavyy Jonez) bounce out of the party, wandering their neighborhood, only to get mistaken for a couple of hoods that robbed a bodega. Calvin gets shot in the confrontation, and C.J. worries that it was all her fault. So, using their backpacks (which she's been working on to make even more powerful), C.J. and Sebastian go back in time, over and over, to try and fix the event and save Calvin.

On the one hand, the film is a tad silly, at least when it comes to its own time travel mechanics. It knows this, of course, using Michal J. Fox's character to comment on the absurdity of "time travel backpacks" early in the film. The movie keeps having to invent its own rules, and then reinvent them, and then come up with ways to tweak the rules to let the characters try something different on the next iteration of their trip, meaning that the mechanics of the time travel, and the twisty nature of what their doing, amounts to essentially an Austin Powers handwave. "Don't worry about it and just get invested in the story instead." 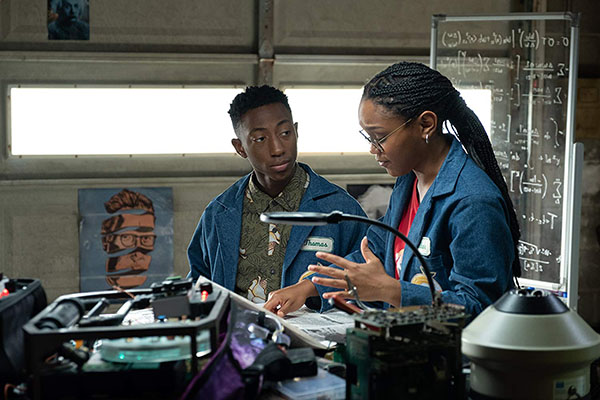 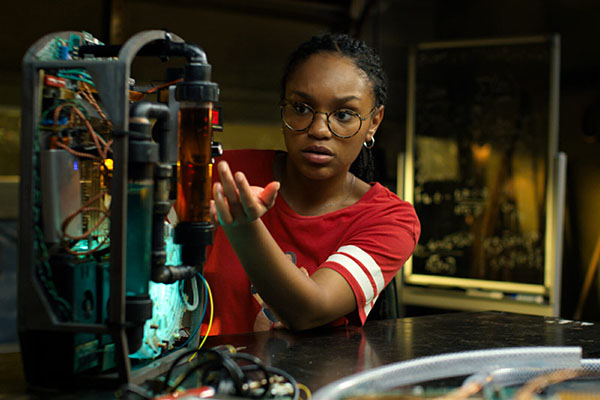 On that front, though, the film more and succeeds. You do invest in the drama of C.J. and Sebastian trying to save Calvin (and then, due to further mistakes in the timeline, C.J. having to recalibrate her own mission and save Sebastian as well). The time travel gets a bit twisty, but the goal, "save the brother, save your family," is strikingly clear. You want Calvin to survive, and each time the teens fail it does hurt just a little, which only adds to the drama of the story.

The film, wisely, makes you wait for a successful time travel attempt. We, instead, get to spend about twenty minutes with the characters, learning about C.J. and Sebastian as well as everyone around them. We see Calvin as a good brother, C.J. as a bit of a hot-head that means well, Sebastian as her doting friend. They all become real people to us, in a way, so that when bad things start happening (all because of the time travel) we hope they can find a way to get everything back on track (even as they spin around the same events over and over).

It's the mid-film twist that certainly adds to the drama of the piece. Here (and spoilers for the rest of this paragraph), in a plan to stop the robbery so that Calvin can never be blamed for the crime (and, thus, never got shot), a past version of Sebastian gets caught in the crossfire and dies, leading the present version to vanish immediately, which causes a new timeline. Calvin is alive by Sebastian is dead, and C.J. can't live with this either. She has to keep working, keep trying new things, keep looking for a way to reset things, and every time something else bad happens that prevents her from reaching her full goal.

Considering it's all-Black (well, one Hispanic teen... and Michael J. Fox) and the year it came out, the story of a Black man shot by the cops was topical enough, but the film does layer on protests and Black Lives Matter subtext to the film as well. Calvin (and then Sebastian) getting shot acts as a catalyst for their neighborhood, with plenty of talk about the actions of the police and the systemic issues inherent to the inner city. The film doesn't shy away from it, and it certainly doesn't try and paint the cops in a good light, keeping the focus on the neighborhood and the kids. It's a smart angle and one that better fits not only the story but also the times we live in now. 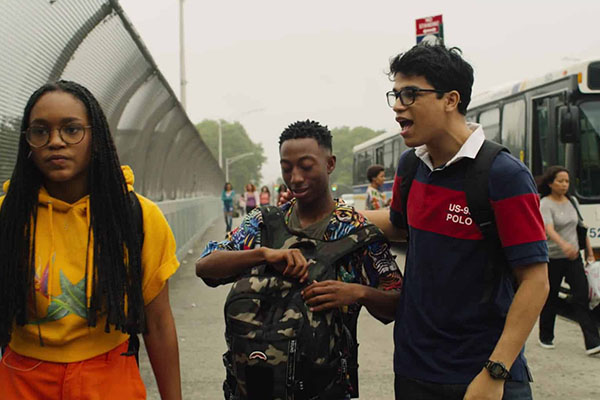 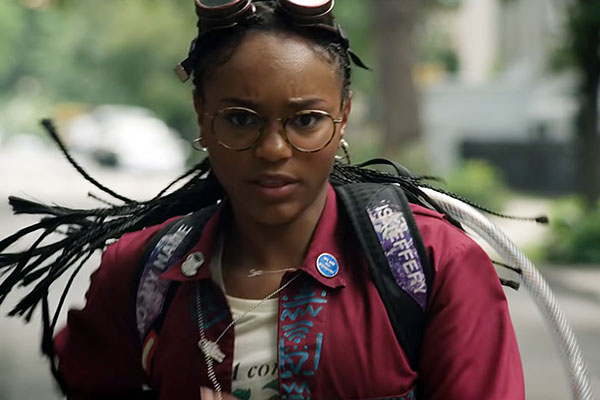 Part of me can see why the film fell off Netflix's charts so quickly: it's a good movie, solidly told and well acted -- Duncan-Smith being a stand-out in this regard -- but the time travel mechanics lead to a few janky story beats. At a certain point so many things have been reset, over and over, that it's hard to invest in some of the later happenings. The overall ambiance of the piece, of police violence and protests and a girl spinning out as she tries over and over to make up for her mistakes, is solid, but each reboot of the timeline wipes away later twists so that characters get reset over and over again. C.J. is our constant, and by the end of the film she's really our only consistent character and that does hold the film back some. The drama could be just a little deeper if some of the time twists were forced to carry over after each trip.

Still, this is a really good, and topical, film that has fun with time travel before it gets into the serious business. As an opening salvo for the careers of the actors, director Stefon Bristol, and the writing team of Bristol and Fredrica Bailey, See You yesterday really stands up. It's not perfect but it is a solid entry in the time travel canon that comes to us from a different perspective, and a different community, than we normally see. I'll happily take more Black-influenced films in the Sci-Fi and Horror genres (to join my beloved Blacula), and if this film marks more genre films from the Black community, I welcome it. This is the quality of film that can really put their mark on the genre.