And Now the Sad Conclusion About a Family...

I will admit that I wasn't hooked by Arrested Development when it first debuted. For whatever reason I caught the first episode on TV (during a time when I barely watched network television at all) and while it was amusing, it didn't hook me. When people complain about how Arrested Development never found the support of the audience, I'm willing to shoulder at least a little of the blame for that. I didn't watch it after that first episode and clearly I had the chance to -- it didn't immediately grab me and I didn't bother going back until long after the show had been canceled and the complete (at the time) series was available on DVD. 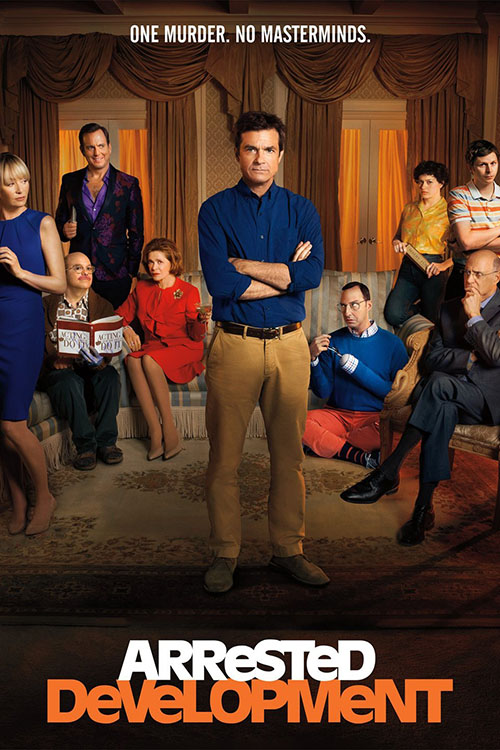 After much cajoling from friends I did eventually give the show a second chance and, of course, after watching more than the first episode, I enjoyed the hell out of it. As many have noted, Arrested Development is a show that builds and layers upon itself as you watch it. There are shows that will develop a running gag, or give a character a one-liner they abuse. With Arrested Development, you don't just get one running gag, or one line, but multiple of each, added in, layered upon each other, and reused in different ways over the course of the series until they all take on new meaning. That, combined with the performances of the main characters, means that, for much of the series, the show is uproariously funny, using it's jokes and built up material to constantly reinvent itself.

Not that I said "for much of the series" because, when the show was finally resurrected on NetflixOriginally started as a disc-by-mail service, Netflix has grown to be one of the largest media companies in the world (and one of the most valued internet companies as well). With a constant slate of new internet streaming-based programming that updates all the time, Netflix has redefined what it means to watch TV and films (as well as how to do it)., some of that magical spark had been lost. Some pains were to be expected with a show that, at the time, had been off the air for seven years. Getting the actors all back into the roles was probably hard enough, but after the cancellation of the original series many of the actors had also become much more famous, and their schedules also presented their own issues. Eventually the series creator, Mitchell Hurwitz, decided to rework the format, making each episode a character-specific affair (instead of the normal inter-cut stories of the previous season). It was an interesting idea, a noble experiment born out of the way Netflix distributed its shows with all-at-once seasons, but it honestly just didn't work. The front half of that season especially was rough, and it wasn't until the last few episodes that season four approaching anything like its former glory.

With the fifth season the show reverted to it original storytelling style. Of course, yet another five years had passed and the biting commentary the show had been developing in the fourth season about Trump, the 2016 elections, and that whole mess, already was feeling dated. A show about spoiled rich people so locked into their own reality that they couldn't understand how the rest of the world operated suddenly didn't feel quite so funny on its own (since that was the reality of the situation in the Oval Office). That, mixed with the general malaise that seemed to be infecting the writing and performances on the show, meant the entire production felt like it maybe should have just never come back at all.

Arrested Development is concerned with the Bluth family, a rich, out-of-touch group of people who care about nothing other than money and staying out of jail. Due to a series of bad investments they don't have much of the former and, in the process, end up spending a lot of time in the latter. Through it all there's Michael (Jason Bateman), the one character that show tries to hold up as the paragon of virtue in this den of snakes. He wants to do right by his family, but he also struggles to balance that with wanting to get himself and his son, George Michael (Michael Cera), away from the rest of them. However, Michael keeps getting drawn back in, time and again, and over time we all come to realize that with his own petty schemes and back-biting, Michael isn't really any better than the rest of them. It's funny, and as a pay-off for the end of the third season when the show was unceremoniously canceled, it worked well. And then the show struggled to keep that premise going. 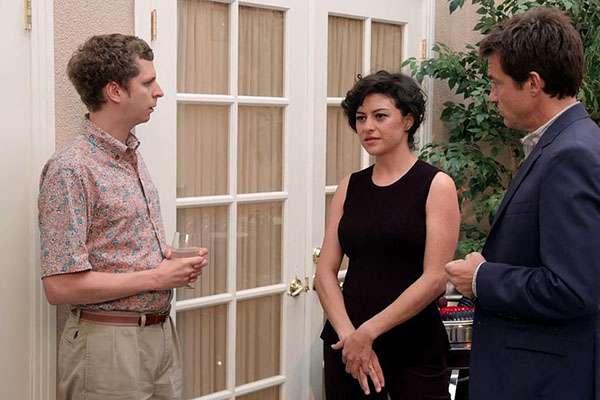 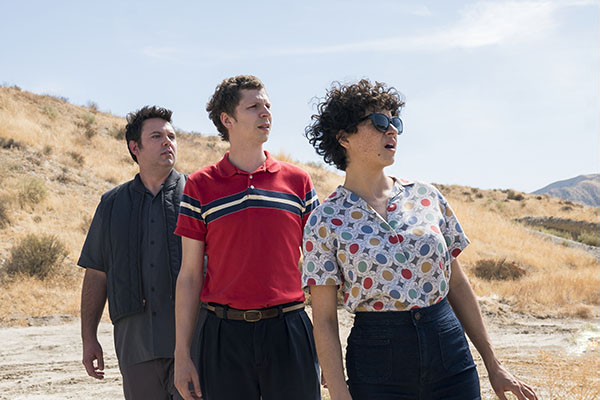 Part of what makes fifth season so hard to watch is that most of the characters are just going through the same motions they've been doing for all the previous years. Michael's brother, G.O.B. (Will Arnett), is an idiot magician who struggles to gain any kind of standing or respect within the family. His brother-in-law, Tobias, is a confused man who desperately wants to be an actor, or to have any standing in the family, or anything to call his own. And his youngest brother, Buster, is a man-child who really doesn't understand anything going on around him. For the fifth season these three actors get a lot of screen-time without many of the other characters around to bounce off of them. When they're mixed with Michael or his back-biting sister Lindsay (Portia De Rossi) the chemistry between them, and the constant barbs elevate those characters. On their own, though, they're tedious, and we see them a lot on their own.

Meanwhile, the real vicious humor came from any time Michael and/or Lindsay had to deal with their mother, Lucille (Jessica Walter). Lucille, though, doesn't get a lot of time around Michael this season, with each of them having their own storylines to pursue, and Lindsay is basically missing for the entire back-half of the show entirely, meaning a key component of the solid chemistry that drove the show is gone entirely. Without Lindsay there to add her kind of sniping humor to the mix, the show had to elevate other characters to fill the void, and there just aren't enough other characters capable of handling that role.

The only one able to carry her segments, really, is Maeby (Alia Shawkat), Lindsay and Tobias's daughter. Maeby has always been a character sitting on the outside of most of the show, quiet and sarcastic and probably just a little sociopathic. Over the course of the run she grew to be a solid character, an absurdist outsider always good for a quip or a quirky storyline. In fifth season Maeby goes deeper into her own rabbit hole, adopting the persona of a sixty-something woman (where the character is in her early twenties) so she can live away from her family in a senior facility (she honestly enjoys the lifestyle). The lengths she went to for that lifestyle, to maintain it and keep it out of the grasp of her family, created some of the best moments in the front-half of season five. Unfortunately once the writers put her in that story they really didn't have an "out" for it, writing themselves into a corner, thus letting Maeby's great story peter out.

Really, that's the problem with just about all of season five. While it didn't start off that strong, the front-half is generally better than the back. The last eight episodes, uploaded nine months after the first eight of the season, are much weaker than what came before, meaning that the show made fans wait nine months for a sad, laugh-less conclusion to the season (and probably the show). 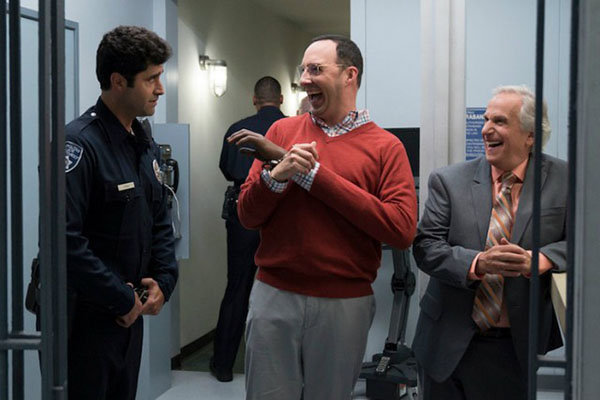 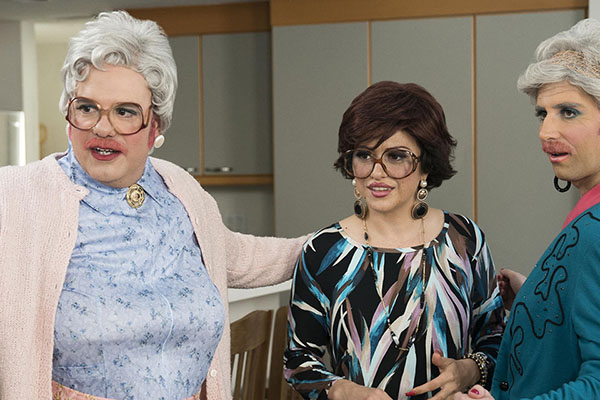 It's sad how this show has ended, and make no mistake it's likely done at this point. Although no official cancellation has been given for the series at this point, there also haven't been any rumors of another season slowly gearing up -- before fourth and fifth even started production the creator was on social media hyping up the next set of episodes, but this time there is no hype. Everyone involved has to realize that no one really cares about this show anymore, certainly not with the condition it's in at this point. The show started so fiercely, running out of the gate swinging with verbal barbs and a ton of gags. Now, though, it's just a shadow of its former self, occasionally amusing but never laugh-out-loud funny.

In all honesty, if you're new to the series don't even bother with the Netflix run of episodes. Although season four has its charms, and has an interesting (at least to me) structure, it's not as good as the previous seasons that aired before. And certainly season five is the worst of the lot. Go watch the original three seasons and only come in for the Netflix run if you absolutely have to know what happens next. Just don't say I didn't warn ya.