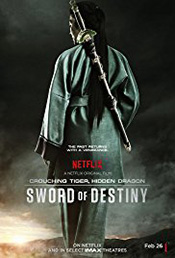 Although I don't normally tend to list it among my favorite movies of all time, the film Crouching Tiger, Hidden Dragon is certainly up there. I don't watch it as often as the other films on my list (which I posted a little while ago) but it is a beautiful, powerful movie that serves as a fantastic example of wuxia. Well... I say that having not watched as much wuxia as some, nor am I Chinese, so the cultural connection I feel to it is lacking (since I don't have one).

Admittedly I'm not a scholar of wuxia or martial arts films in general like I am of blaxploitation films, but I do enjoy the films I watch, especially the ones that are well produced, and Crouching Tiger, Hidden Dragon is one of the best produced films of the genre I have seen.

What makes that movie so good, at least from my western perspective, is all the things it gets right. The acting is great, with standout performances from Chow Yun Fat and Michelle Yeoh. So many of the performances are so good, so much emotion is conveyed from the actors, that the only way to truly appreciate the acting is to watch it in its original language with subtitles. I say that as someone that normally hates reading his movies (primarily because I always have two other things going while I watch and having to keep my eyes focused for any length of time eats in to the amount of time I have to work while I watch). Crouching Tiger commands your attention, though, so having to devote yourself to reading while you watch so you can enjoy it is worth the investment.

Not that performances are the only thing to enjoy. It's regarded as a well filmed, well produced, well fought martial arts movie, with great set design, fantastic fight choreography, and a deliberate, story-book tone. Everything about the original movie is thought out, and the attention to every detail is seen in every scene.

The biggest slight I've every heard lodged against the movie is that, for eastern audiences, the movie is just one among many films like it and not, as it was to the west, a new and innovative film giving new life to the martial arts genre. Sadly, I don't think anyone is going to feel like the sequel, Crouching Tiger, Hidden Dragon: Sword of Destiny, is anything other than one more martial arts movie among the pack.

One thing I've seen reviewers say about CTHD II is that it's just a cheap cash-in on the name of the original, a direct-to-video sequel is an attempt to make a little more money on the name recognition of the original. I have my doubts on that fact, since it's a Netflix production, so the only one making money is Netflix, and even then only through subscriptions, which Netflix would get whether or nor it had a long-in-the-works sequel no one asked for. In fact, in many ways sequels people really didn't ask for its Netflix's bread butter -- the Wet Hot prequel, the awful Fuller House, and the upcoming Gilmore Girls movies. A Crouching Tiger sequel is just one more continuation the online distributor could give to it's select fans, an easy decision for the company that shows it listens to people and figures "why the hell not?" when someone asks for one more continuation to a beloved property.

The big issue, though, is that CTHD II is far removed from the magic of the first film. While Michelle Yeoh returned to work with the choreographer of the first flick, Yuen Woo-ping (now acting as director in the second installment), they're the only returning faces, and neither of them seem nearly as interested this time around. Yeon lacks the presence she had in her first outing -- maybe she couldn't recapture the magic without Chow Yun Fat (who couldn't return, spoilers, due to his character being dead) or was just bored by the awful script -- making her scenes vastly less interesting to watch than they should be.

Yuen Woo-ping, too, doesn't seem to have brought the magic this time around, but again we can probably find reasons for this. For one, the director of photography and the editor for this film each lack the ability to work with the subject matter properly. Scenes are filmed too close to get a feel for the action, and the editing is choppy and erratic, both problems common in western film-making (and this film is a eastern production, not eastern like the first flick).

The story, too, is decidedly lacking in this film. The love story between the two leads (balanced out by a second story between younger warriors) gave the first film a sweeping feel. The two tales rotated around a exploration of the wuxia culture, and the first film took the time to delve through the story beats, never rushing but also never stalling for time. It was a confident script that knew the story it wanted to tell and how to tell it.

CTHD II has none of that confidence. Like the action, the story of the sequel is choppy. Scenes of comedy butt up against scenes of high drama, interspersed with action set pieces, all of which is put together to get the story from point A to point B. None of it flows, and even the action hardly feels necessary to the plot.

Even the story-book style of the first movie is lost in the sequel. The colors are hyper saturated, the effects over-produced. The film feels less like a movie and more like an overly long episode of a soap opera, something meant for TV, with a TV budget, and then released as a movie because the Weinstein production company was still involved in its production for some reason.

In the end, what it really brings to mind is a mini-series writ small. It's funny because there was a mini-series based on the original Crouching Tiger novels called New Crouch Tiger, Hidden Dragon when it was released here in the west. If someone had said CTHD II: Sword of Destiny was a sequel to that production (which had markedly lower production values and an over-all soap opera like feel to it) I doubt anyone would have questioned it. I'm sure reviews would have said "faithful to the source material, a strong continuation of the story".

Instead, though, we had a vastly better production, a movie beloved by many in the west, one that stands head and shoulders above this direct-to-Netflix sequel. Did we need a sequel to CTHD? I don't see why not -- the original was largely based on the fourth book is a series of five, so if the right team had come together to make any of the other books into films (prequel or sequel), I think it could have bee a winner. Sword of Destiny is not that production, and for all but the most die-hard fans that have to see everything Crouching Tiger, the sequel is better ignored than watched.

Before watching this flick I would have assumed I was a true fan. Instead, though, I found yet another movie I could ignore while I worked on other stuff.