I'll be honest, I didn't know what to expect going in to Umbrella Academy. A number of the reviews I'd read for the series all seemed to find issue with the way the series was adapted, but then many of the reviewers were faithful fans of the original Umbrella Academy comics and they seemed to take issue with the changes the series made from the source material. I've never read those comics, so I didn't have any preconceived notions about the story. It is hard to shake a bad review, though, so I was initially reticent to watch the series. 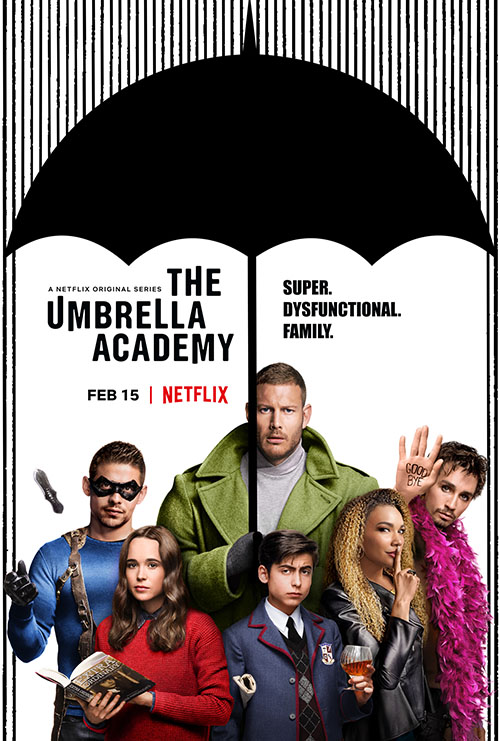 Plus, to be honest, the trailer for the show made it look like X-MenLaunched in 1963 and written by Stan Lee and Jack Kirby, the X-Men featured heroes distinctly different from those featured in the pages of DC Comics. Mutants who didn't ask for their powers (and very often didn't want them), these heroes, who constantly fought against humans who didn't want "muties" around, served as metaphors for oppression and racism. Their powerful stories would form this group into one of the most recognizable superhero teams in comics (and a successful series of movies as well). filtered through a Wes Anderson-style lens (and not in the goofy, fake trailer kind of way). I'm not a fan of Wes Anderson's works (his films have just never hooked me) so the thought of watching ten or so episodes in that style, no mater the story, made me cringe. I just didn't know if I had it in me, whether the series had superheroes in it or not.

That said, I'll give anything a chance, so I popped on one episode, and that lead to another, and then another. All the issues I worried about are certainly on display in the series and yet the series was much more watchable than I expected it to be. It's rough, and needs a lot of tightening up before season two comes out, but as a first run of episodes Umbrella Academy is fairly successful.

In the series a whole host of kids are born on the same day in 1976 to mothers who, just minutes earlier, were pregnant at all. Realizing how strange this is (understatement of the year, of course), one rich industrialist, Sir Reginald Hargreeves (Colm Feore), uses his money and adopts seven of the kids. Why? Because he wants to train them to be superheroes. Seriously. It's like if Professor X was a rich and aloof British man who took in kids and then ignored them until he could use them... Wait, that sounds exactly like Professor X. I see what they did there.

Years later, six of the kids grew up to be super-powered heroes -- Luther, aka Number One (Tom Hopper), who is super strong; Diego, aka Number Two (David Castaneda), who can throw and control knives; Allison, aka Number Three (Emmy Raver-Lampman), who can spread rumors and control minds; Klaus, aka Number 4 (Robert Sheehan), who can speak to the dead; Number Five (Aidan Gallagher), who can teleport through space (and time); and Ben, aka Number Six (Justin H. Min), who has eldritch monsters living under his skin -- although eventually they all go their own ways once they become adults. The seventh child, Vanya (Ellen Page), apparently had no powers and was essentially the black sheep of the family. 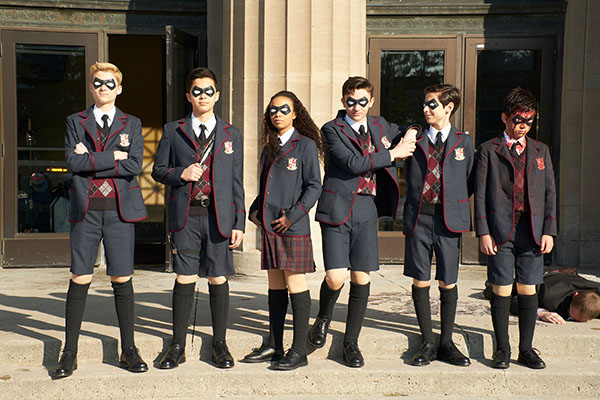 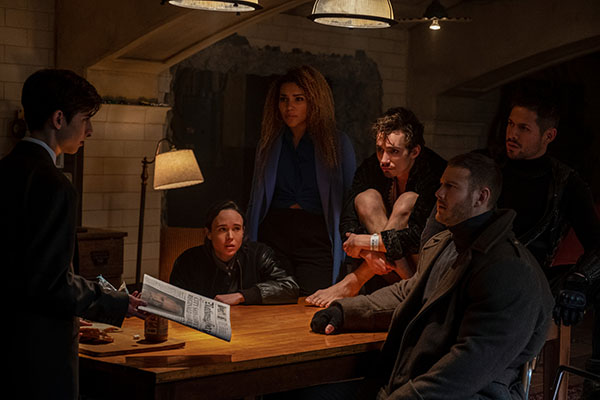 All the kids eventually come back to the family estate when Sir Reginald dies. Then Number Five reappears after have been missing since they were all children -- he traveled to the future only to find the world blasted apart by an apocalypse. Now he has to convince the rest of the team to come back together and find a way to stop the end of the world before it all happens again. The only problem is that one of them may actually be responsible for it, they just don't know it yet.

At its core, Umbrella Academy has an interesting premise to play with. Each of these kids has a special power presumably given to them by their miraculous birth. Trained together from an early age, these six (seven counting Vanya) could save the world, if only they could get past their own petty issues. It essentially read like a Marvel team with deal, systemic family issues. This part of the story is interesting, as is slowly exploring each of their powers over the course of the season.

That said, there are also big issues with the show, not the least of which is that it tries to do too much with too many characters all at once. Number Five jumping back in time is the cog that sets the entire plot in motion, but for him to get there the series then has to introduce another set of characters: the Time Bureau. These agents are caretakers of the time line, and it's their job to ensure everything happens just like it's supposed to (including the end of the world). This only serves to put more people in play, cause more trouble for all the heroes, and make a mess of all the plotting.

The fact is that the Time Bureau really isn't necessary to the plot of the series -- it already has a good enough hook with the heroes trying to prevent the end of the world. If the series could have just focused on that (and the one kid in the Academy who, apparently, will usher it in), that would have been enough story for the entire first season. I'm not saying the Time Bureau couldn't have been introduced eventually, just not in the first season. Their actions muddy the waters and cast a pall over everything. Essentially, how can you stop the end of the world when an agency that can change any event, cause anything in the time line to happen, is working against you from moment one? You can't, and that issue is never addressed in the series. 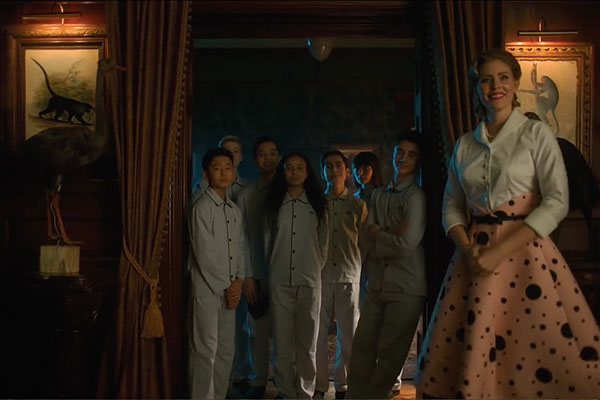 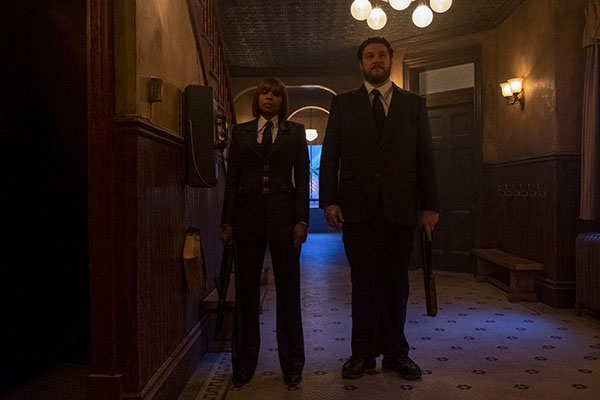 Honestly, there's a lot that doesn't get addressed in the series. Because the show jumps from the students as kid to when their all adults and living elsewhere, we miss vital moments in their lives that inform who they are. The show makes passing nods towards the part of their history that we missed, but for the most part nothing about these characters is every really explained. Instead, the character are all given very basic, trope-laden character traits that are supposed to band-aid over this. Klaus, for example, is a druggie always looking for his next fix. That's his whole story right up until the last couple of episodes of the season, and it's not even a very well handled one (hell, Netflix already had another show with the same kind of character debut recently, The Haunting of Hill House, and they were handled much better over there).

Plus, frankly, none of the heroes have powers that are all that interesting. They are all, for the most part, versions of super-powers we've seen before. Luther is strong, like Superman from his earliest comics (or Mr. Incredible if you prefer that reference), while Klaus can speak to dead people (like the kid from The Sixth Sense, and Number Five can bounce around as if he was Nightcrawler. Hell, go far enough afield and you can find parallels for all the characters, like Diego who can thrown knives and curve their trajectories as if he was a reject from Wanted. Their powers are fresh or interesting, which leaves us with that much less to hook us into the proceedings.

Simply put, the show spends far too much time on its convoluted story and all its narrative twists and turns without ever slowing down and focusing on the core ensemble of characters. We never learn enough about them to develop attachments to the characters. This hurts them as protagonists, and it especially hurts the one student that eventually becomes the antagonist (I'll keep it a secret here for the spoiler averse even though it's pretty obvious from the beginning how it all plays out). We need to get to know these characters, but the show would rather play around in the world than focus on the people living within it.

And yet, despite all this I did find myself continuing to watch (and not simple to "hate watch" the series). When the character get together and are simply allowed to act like family, the series really works. It clicks, powering through all the issues to give us a compelling dynamic. These character are all played by charismatic actors that own their roles so it would have been nice for them to have a story to match their commitment. The story just isn't there so the characters are left holding the bag. 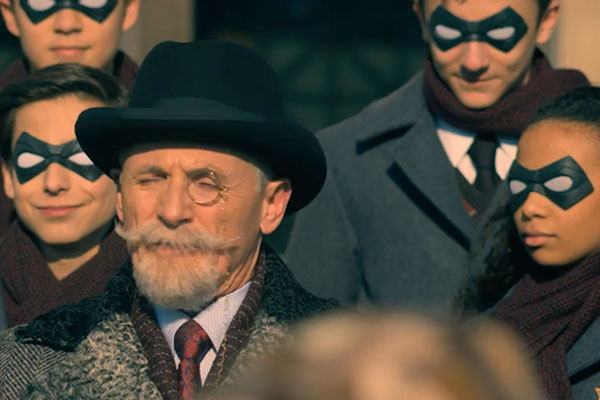 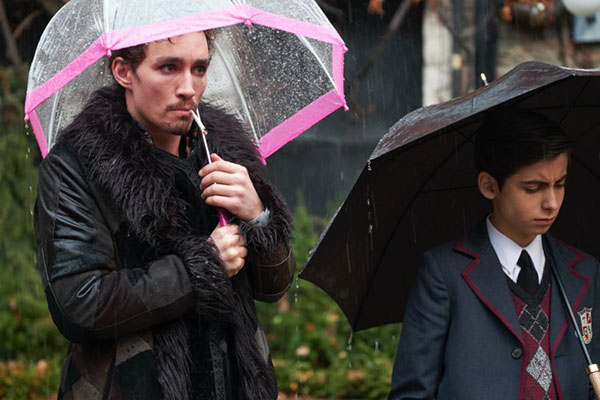 Seriously, the series has a late game twist (that, once again, I won't spoil), and it force the characters into setup for season two. It does it in a ham-fisted way I hated all because it felt like the series didn't really know how to write more story for these characters and satisfyingly tie up all the loose ends it setup in this first season. So it cops out and just kicks the ball down the street. The ending, in short, sucks and even now, a week later, I'm still mad at it.

If you're going to watch Umbrella Academy (and you're not one of the faithful that are going to watch it anyway, reviews be damned), then you have to ask yourself what you want out of the show. Are you fine with a series that is too twisty for it's own good but has some really compelling characters in the mix? If you are then this series just might has something for you. For everyone else, maybe wait until season two to see if the reviews get any better.