Throw Another One Back

Well, this is it: the end of the NetflixOriginally started as a disc-by-mail service, Netflix has grown to be one of the largest media companies in the world (and one of the most valued internet companies as well). With a constant slate of new internet streaming-based programming that updates all the time, Netflix has redefined what it means to watch TV and films (as well as how to do it). Marvel Cinematic UniverseWhen it first began in 2008 with a little film called Iron Man no one suspected the empire that would follow. Superhero movies in the past, especially those not featuring either Batman or Superman, were usually terrible. And yet, Iron Man would lead to a long series of successful films, launching the most successful cinema brand in history: the Marvel Cinematic Universe.. After this, Netflix is done making Marvel TV shows. All the shows they had in production, and greatly lauded at the time -- Daredevil, Luke Cage, Iron Fist, and this show of course, plus their crossover The Defenders and spin-off The Punisher -- have all been canceled, never to see further adventures on the streaming service again. And, honestly, I think that's okay. 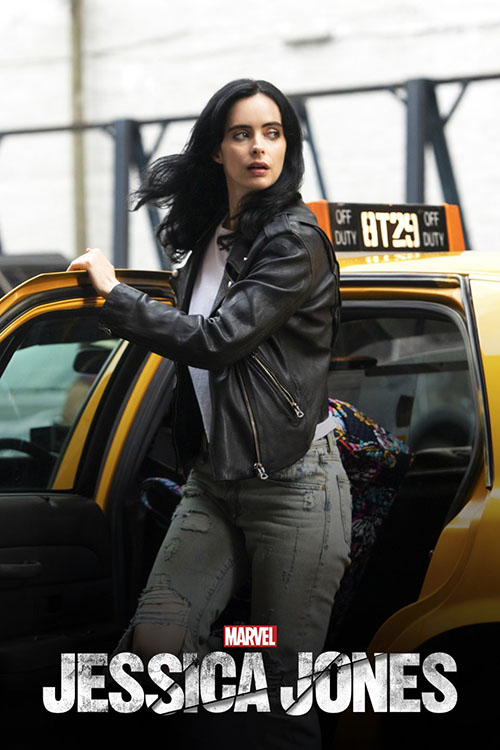 Firstly, just because the characters have been canceled on Netflix, that doesn't mean this is the last we'll see of them. Disney/Marvel has already made little comments that there's a possibility of the shows being resurrected, in some form, on Hulu or Disney+. Sure, it'll be some time before that can happen -- the Netflix contract has a force two-year wait for Disney to use these characters if their shows were ever canceled, and presumably that extends right up to the release date of Jessica Jones season 3, so we're looking at two years from now. But anyone hoping for a Daughters of the Dragon or Heroes for Hire revival has to have at least a little hope. But, also, let's be frank: these shows have kind of sucked since their first seasons.

Coming out of the gate the Netflix MCU had such energy. The first season of Daredevil was dark and frenetic, different from the movies in the MCU while still feeling of-a-piece with them. It had style and a budget to back up its ambitions, allowing the show to tell a solid, long-form story in the universe. Sure, it got a little saggy in the middle and probably could have had its first season cut by a couple of episodes without it suffering, but the show was good overall. This was then followed by the absolutely killer first season of Jessica Jones which sported a fantastic story of Jessica (Kristen Ritter) battling the sadistic, mind-controlling Kilgrave (David Tennant). This one-two punch of shows set the Netflix MCU on a grand track.

And then the shows just weren't able to keep up with the promise laid out. Daredevil's second season was half of a good show -- the parts that focused on the Punisher, but everything dealing with Elektra and the Hand was absolutely wretched. Following that, the first season of Luke Cage was good but bloated, with a number of episodes that easily could have been cut to make it all zippier. And then Iron Fist dropped like a brick with a lifeless first season that absolutely mishandled the character. After that it felt like the shows had no focus, no center. Once The Defenders came and went with a yawn, any crossover ambitions were ditched and the follow-up seasons of the shows felt aimless. By the time the shows started getting canceled, it was hard to be surprised.

Through it all, thought, Jessica Jones remained a bright spot. While its second season wasn't as good as its first, largely because no one could compare to David Tennant's electric performance as Kilgrave, it was still a solid season of television. With Jessica Jones already getting canceled before its third season debuted, the hope was that the show would at least go out on a high note, continuing it's run of great television. Sadly, that just isn't the case. While the characters are all still pretty good, and Ritter's performance as the titular character is fantastic no matter how bad the show gets around her, there just isn't enough meat to the season to carry thirteen episodes. 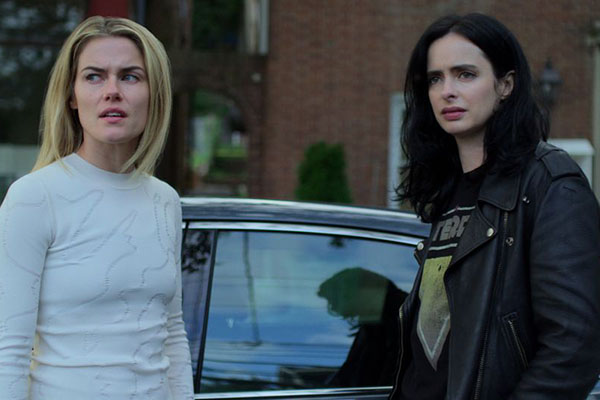 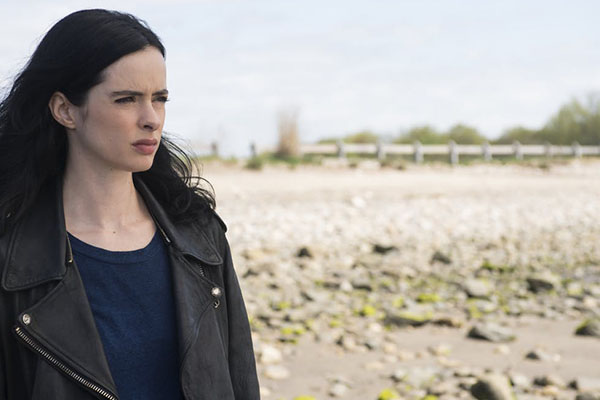 The problems start pretty early on with the introduction of Gregory Salinger (Jeremy Bobb), a serial killer and self-proclaimed super-genius. Jessica is put onto his case after a different man, Erik Gelden (an "enhanced" human with the power to detect the evil within others), comes calling. Salinger meant to kill Erik but, when Jessica answers the door, he stabs her instead before running away. This pissed Jessica off, so she gives chase over the course of the season all to put this man away for good. While this is going on, Jessica's adoptive sister Trish Walker (Rachel Taylor) has developed her own super powers and become a masked vigilante (in the comics she's known as "Hellcat"), and then gone off on her own fight against injustice that has put a number of people in the hospital (and, eventually, worse). Jessica has a lot on her plate and, eventually, it'll all crash together, testing her allegiances to her friends, family, and the law.

Essentially the show has two big bads over its course, a situation not entirely unlike the second season of Daredevil, and it spins its wheels trying to develop both sides of the equation. The obvious big bad, Salinger, is the first real issue because, honestly, he's a terrible villain. On its face a serial killer should be a no-brainer villain for Jessica to fight. She can go places the police can't, she can find evidence they aren't able to collect, and she's willing to do things they won't because she'll color outside the law. Once she has a serial killer in her sights, it should be a game of cat and mouse with a worthy foe.

But Salinger isn't a worthy foe; he's the kind of villain that will say how smart he is but every time he has to actually take actions he does stupid things. His characterization is inconsistent and the only reason he gets away with it for most of the season is because everyone else on the show is acting stupid as well. He's smart by comparison, but only because everyone else got dumber in the intervening time between seasons. Remember, Jessica has been shown to be a super-genius in her own right when it came to being a Private Detective. While she might not be as smart as Salinger overall, she's really good at this one job to the point where not even Salinger should be able to keep up. But you wouldn't know it from all the dumb things she does, and the number of times she falls for his traps.

He's still a more effective villain than Hellcat. Trish hasn't really been a great presence on the show for a while now since, for the most part, her role has been to play Jessica's rich, privileged sister. Trish getting powers doesn't change this about her, it just makes her act even more privileged. When she suddenly starts killing people for justice it's not a surprise just an expected reaction because she feels like she can do anything. Thus the inevitable confrontation between the two siblings doesn't have the energy it should -- instead of playing like a heartbreaking moment between two people that love each other it's, instead, a resigned sister battling her roided-out super-sibling who fails to see how evil she is because she's always right. There's no catharsis there, and no matter how big the showdown could get (which, honestly, it was a pretty weak affair), it lacked the emotional connection needed for the material. 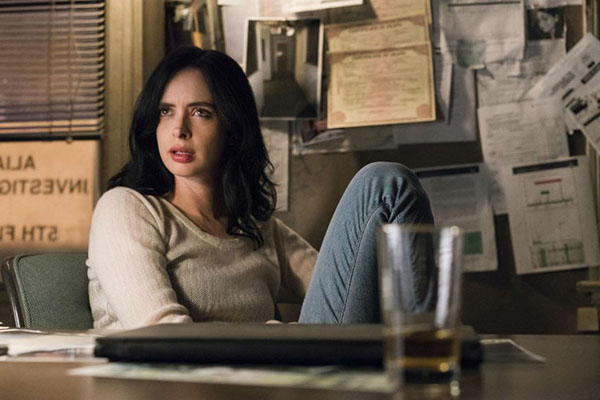 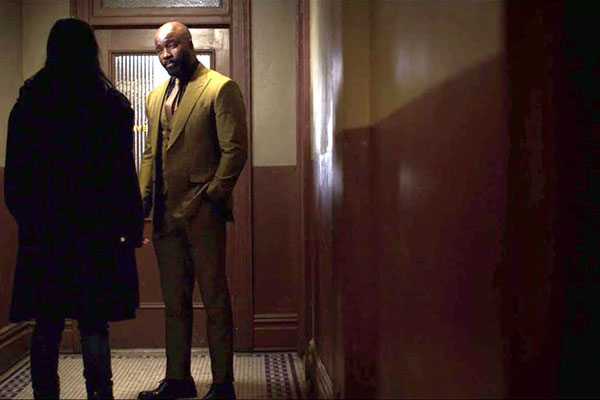 That then leaves us with the characters themselves to enjoy leaving the moments between the big set-pieces as our main entertainment. Here, at least, the show does understand what's needed. The quieter moments between Jessica and her friends and colleagues are great, with plenty of sarcastic jokes and witty banter. The show still understand its characters at a micro level, it's just the once the story beats come back into swing the show loses sight of who these people are. It had to move Jessica into a place where she can make a mistake against Salinger, it has to move Hellcat around to a point where she won't listen to Jessica, and it had to position all of them so that the killings can go on, and on, even when everyone understands how to end it all. It is, in short, really stupid.

I think what this show really needs is time off (like two years or so, funny that) before getting picked back up by Hulu. And then, the show needs to change hands, moving from Marvel Television over to Marvel Studios. The arm that creates the great movies and manages to tell long form stories over the years, needs to be in charge of these shows to give them new energy, new oversight, and to refocus them into shows that really work. Right now there's a thread in Jessica Jones that's still good (an anchored by Ritter, of course) and if they can just get back to what makes the show work so well maybe it (and all the other Netflix MCU cast-offs) can be redeemed.