Season Designed Only for Animation

Marvel hasn't had a ton of success on TV. Although they've had a number of projects launch of the boob-tube since the start of the Marvel Cinematic UniverseWhen it first began in 2008 with a little film called Iron Man no one suspected the empire that would follow. Superhero movies in the past, especially those not featuring either Batman or Superman, were usually terrible. And yet, Iron Man would lead to a long series of successful films, launching the most successful cinema brand in history: the Marvel Cinematic Universe., it was only very recently that any of their shows (like WandaVision) actually succeeded in bringing the zest of the MCU to the small screen. Much of that is because Marvel Studios was in charge of film while Marvel Television was responsible for, naturally, television. That divide meant the two sections had projects that seemed like they should be in the same universe but really weren't (like all the Marvel shows on NetflixOriginally started as a disc-by-mail service, Netflix has grown to be one of the largest media companies in the world (and one of the most valued internet companies as well). With a constant slate of new internet streaming-based programming that updates all the time, Netflix has redefined what it means to watch TV and films (as well as how to do it).), but thankfully that divide was closed and everything is controlled under one roof at Marvel Studios now. 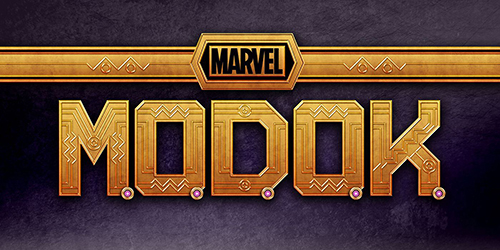 That said, there were still a few projects in the works before the rift was sealed, and one of those was the Hulu series M.O.D.O.K., an animated project only tangentially related to the MCU. This series, created by lead voice actor Patton Oswalt (along with co-creator Jordan Blum), focuses on the titular, big-headed supervillain, a deep-cut villain straight from the pages of Marvel Comics. He's a weird, strange creation and that's reflected in this show. And, at times, the show is able to tap into the weirdness of the character, and his world, to create some really interesting, and hilarious, stories. Much of the time, though, the series doesn't quite reach the aspirations of the creator, or the weirdness of its lead character.

In the show, MODOK (played by Oswalt, and I'm skipping the periods in the character's at this point as they're annoying to type) is the leader of evil organization AIM (Advanced Idea Mechanics), his supervillainy think-tank where he hatches all his schemes to destroy the AvengersMarvel's answer to DC's Justice League, this team features many of Marvel's biggest superheroes working together to protect the world and avenge its evils. and rule the world. But while he's been focusing so hard on his (frankly really stupid) schemes, he's let AIM bankrupt itself. Beyond that, he's also been ignoring his family -- wife Jodie Ramirez-Tarleton (Aimee Garcia), daughter Melissa (Melissa Fumero), and son Lou (Ben Schwartz). After another of his schemes fails and he says something awful to his wife, she kicks him out, deciding she'd be better off without him. Oh, and due to his workplace going belly-up he has to sell AIM to Internet company GRUMBL, and almost immediately they start screwing him over, too.

Now, stuck living on his own in a crappy apartment and reduced to little more than a mail boy at the company he created, MODOK finds himself on the precipice of a mid-life crisis. Who does he want to be, who does he want to spend his life with, and what happened to all his dreams of conquering the world, killing all the Avengers, and being the absolutely ruler of the universe? Can MODOK have it all, or has his life with his family made him soft? Is that even a bad thing?

M.O.D.O.K. is a show with a weird and unusual bent, especially unusual for Marvel. While the company produced a number of shows before the MCU took over the TV projects, most of them were still trying to feel like they could be part of the movie series. They weren't good at it (and the Defenders shows, for example, struggled to bring the big thrills to the small screen), but they did try. M.O.D.O.K., though, doesn't try at all; it's a stop-motion series that feels like it came out of the Robot Chicken studios (which it did). This sets it apart from the main Marvel universe, even as it purposefully pokes fun at the larger cinematic universe. 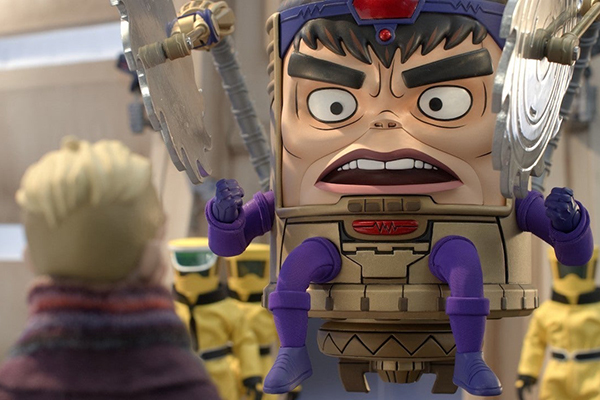 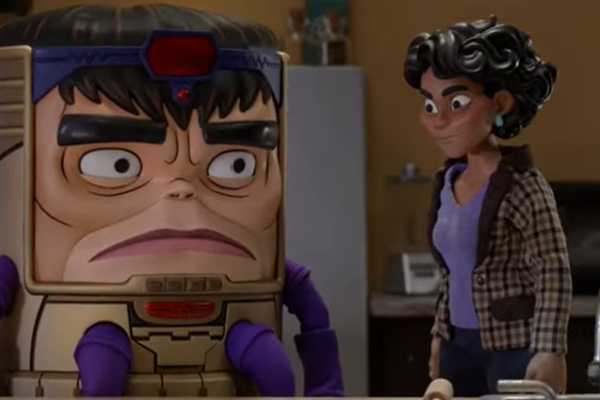 When it comes to the writing, this show is also very far apart from the ambitions of the MCU; there's a reason Disney has this on Hulu and not over on Disney+ as this show does not "blend" with anything Disney wants to lay claim to. This is a demented little show that revels in gross-out jokes and humor for the Gen-X crowd. That's not a bad thing, mind you, and the show does find some great humor from the source material while being able to let loose without the Disney restrictions (the episode that finds MODOK going to Asgard is a special highlight in this regard). It's just, if you're looking for something in the vein of the main marvel productions, this show is not for you.

And while we're laying on some caveats, I do think the show really could have gone further. While this show is freed of the dictates to be so family friendly as the Disney+ shows (and anything in the main MCU, this does feel like a show taking Marvel's first baby steps towards being "edgy". There's a cleanliness to the show that you won't find in a purposefully off-kilter production from DC ComicsOne of the two biggest comic publishing companies in the world (and, depending on what big events are going on, the number one company), DC Comics is the home of Superman, Batman, Wonder Woman, and just about every big superhero introduced in the 1930s and 1940s. -- Harley Quinn this is not. Of course, much of that is from the dictates of the various studios; Warner will let DC get away with more than Disney would with Marvel. Batman may not be able to go down on Catwoman but we don't even really see characters kiss, or hear them cuss much, or see much bloody violence here in M.O.D.O.K.. For a show about a supervillain it's still just a little sanitized.

It also feels like the story can't quite figure out how to balance Disney dictates with the desires of the production team. The show does have its inspired moments, and can create joked far raunchier than the main MCU (which isn't hard considering how clean that movie series is), but it does feel like its holding back somehow. MODOK can't really let loose as a villain, and even the people around him that are far more evil suffer from being held back just a little. You want a bit of the carnage from Harley Quinn, and you can feel the show motioning towards it, but it never quite commits to being as strong, or as evil, as it needs to be. It's sitting at Batman: The Animated Series levels while DC is off doing laps around a blood roller derby rink.

The story, also, just kind of meanders for a while. The best episodes of the show are certainly the ones that have little-to-nothing to do with the plot -- the Asgard affair of "Tales from the Great Bar-Mitzvah War!", MODOK teaming up with a bunch of reject villains in "If Saturday Be... For the Boys!" -- but the actual plot of the show, GRUMBL and evil space aliens wanting to steal MODOK's tech, doesn't really lead to great humor or great storytelling. The show feels too constrained by too many ideas and not enough lead to pursue them, meaning the show sometimes achieves greatness by those moments are few and far between. 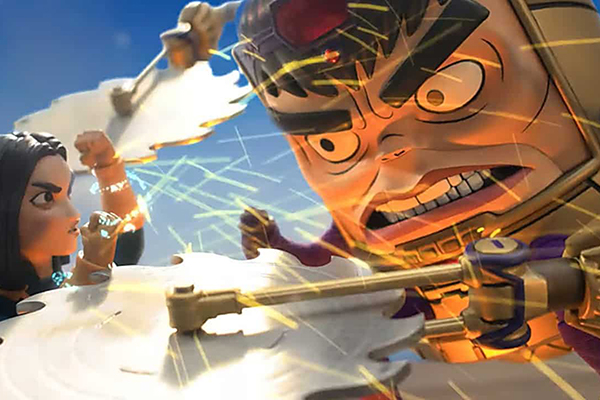 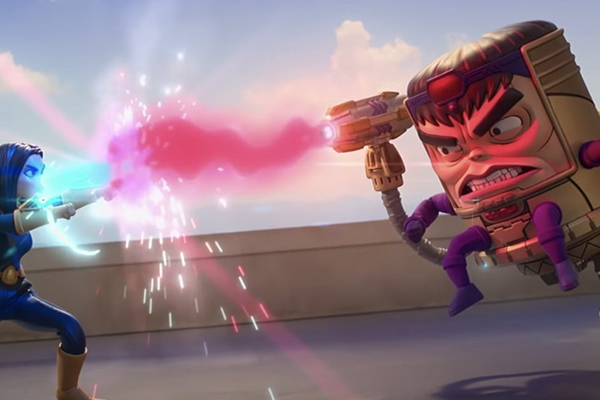 Thing is, though, I think the show has potential. It's not great yet, but by the back-half of the season the episodes start to get more interesting, and the season ends on a cliffhanger that really does have me interested for where it could go in a second season (assuming it gets one, which hasn't be announced yet). The show just needs some ironing, a bit of smoothing, and a little more leeway to really pursue its wondrously evil ideas. MODOK on the show doesn't quite know what kind of villain he wants to be, and I think that applies to M.O.D.O.K. as well. This is a show that really needs to let loose and let its freak flag fly. Until it does it just won't be able to match the ambitions of its freakishly big-headed lead.