Time to Tear It All Down

It's interesting to go back through and watch all the Marvel Cinematic UniverseWhen it first began in 2008 with a little film called Iron Man no one suspected the empire that would follow. Superhero movies in the past, especially those not featuring either Batman or Superman, were usually terrible. And yet, Iron Man would lead to a long series of successful films, launching the most successful cinema brand in history: the Marvel Cinematic Universe. films, in order, watching the series evolve. There are trends you pick up on watching them this way (instead of just doing what I usually do, watching the ones I really like in whatever order I feel), such as how we noticed in Thor: The Dark World that the films have all become far less stand-alone. That trend holds true for Captain America: The Winter Soldier a sequel in name to the first Captain America film, but is really a sequel to everything that's come back in the MCU. 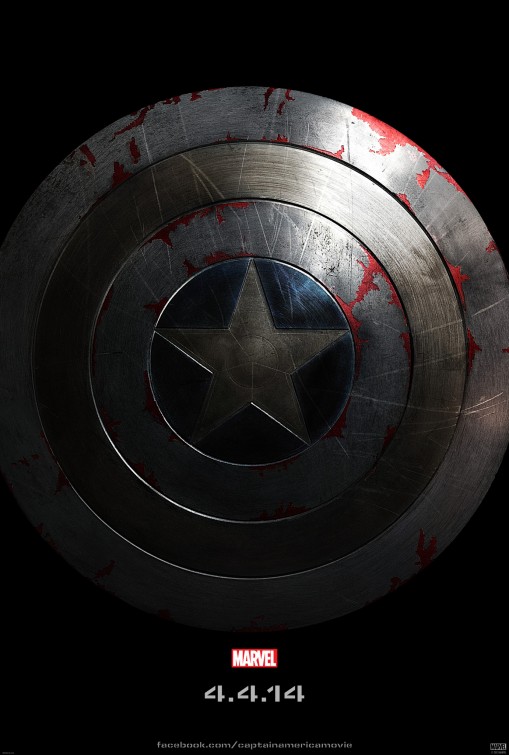 While the other sequel films in the MCU each explored their characters, building on the themes of of their previous movies (even if you had to see the other films in the MCU to get all the references to events), the Captain America films feel much more like world-building movies. Sure, we learn more about Captain Rogers (Chris Evans, once again) and get to watch him bond and explore his friendship with co-lead Black Widow (Scarlet Johanson). But what this film really does is push the story of the MCU forward, evolving the tale of SHIELD. It's almost like a mini-Avengers film (Avengers 1.5, if you like), setting a marker in the stand that neatly divides the MCU into two segments -- this half has SHIELD and everything moving forward does not.

That is, of course, because this is the movie where SHIELD completely gets dissolved (much to the detriment of the SHIELD-centric show ABC launched earlier in the year). Captain America is called in to aid a Strike Team force (including Black Window) to take back the Lemurian Star, a SHIELD vessel taken over by Algerian pirates. While Cap handles the terrorists, Black Widow has her own mission -- collect sensitive intel from the Lumerian Star's data banks and take it back to SHIELD head, Nick Fury (Samuel L. Jackson, of course). This intel, though, leads to a startling discovery, one that seemingly gets Fury killed: that SHEILD had secretly been taken over by HYRDA over the years. Instead of protecting the world from threats, SHIELD had become a threat itself. Cap and Black Window have to go on the run to find answers and figure out a plan to end HYRDA's threat once and for all.

If the first Captain America was a riff on classic war movies (given a superhero twist, of course), The Winter Soldier is more of a Cold War-era thriller. We have two big forces, SHIELD and HYRDA, seemingly diametrically opposed to each other but secretly very much alike. There's secret intel, double- and triple-crosses, and at the heart there are a couple of agents working to bring all the secrets and lies out into the light.

Of course, it's a Marvel superhero movie so the film builds up to a big, superheroic showdown between Cap and new villain, the Winter Soldier, but it does still end with court cases and hearings, so the core style of the film isn't completely violated by the Marvel trappings. Sure, the superhero style does mean that we have clear-cut heroes and villains at the end of the day (this isn't Watchmen), and even Black Widow comes out of the film less murky, more heroic. But this is the closest the MCU has come to showing heroes in shades of grey, and in the process there were long term consequences for the universe. That's a big evolution for this series of films. 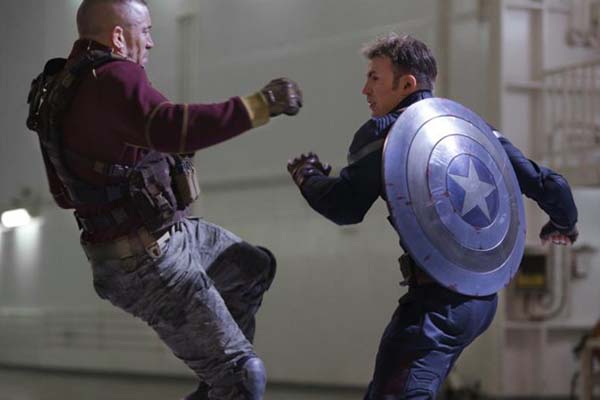 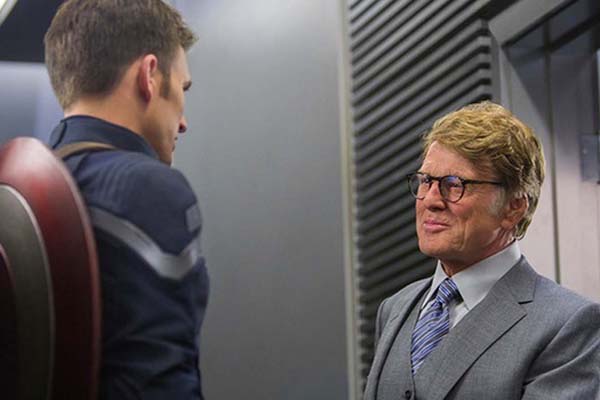 Another big improvement is with the villains. This film has two, and both of them are given drastically more nuance than most of the villain in the MCU before (give or take the occasional Loki). The obvious villain from the posters and trailers is the Winter Soldier. He's a super solider, a shadowy agent sent out on nefarious ops. Introduced here as the agent that kills Nick Fury right in front of Captain America, he's an equal to Cap in just about every way, including (as we eventually learn) being a man out of time. As we eventually find out (although anyone who's kept up with comics over the years already knew this), the Winter Soldier is actually Bucky Barnes (Sebastian Stan), Cap's best friend since childhood, presumed dead since a tragic op in the first movie. Somehow surviving a fall that should have killed him (which is hand-waved away via "HYRDA something something" in this movie), he was experimented on further by HYRDA and turned into their shadow agent.

Making Bucky into the anti-Captain America gives this part of the story real stakes. Once Cap realize who his friend has become, he finds it hard to do what must be done: namely, kill the Winter Soldier if he gets in the way of the mission to stop HYRDA. Buck is Cap's friend, and just the realization alone that Bucky is alive shakes the hero, leaving him stunned. But then to know that he might have to kill him, that it might be the only way to save the world, that leaves him questioning what he is truly capable of. It adds nuance to not only Cap but also Bucky, giving each of them stakes in the final confrontation. Of course, since Bucky was already established in the previous movie, it only goes to show, once again, that the best villains are the ones that are developed over time.

The other major villain is introduced this film, but he's portrayed by an actor with serious gravitas, giving weight to a villain we're only just introduced to: Alexander Pierce, as played by Robert Redford. Some reviews I read questioned why Redford was willing to "slum it" and be in a Marvel superhero movie, but it's clear the actor fully invested in the role, whatever his motivation for being in the movie. Redford gives Pierce, head of the World Council (SHIELD's oversight committee), the needed weight of demeanor, making you believe he's the kind of person that could be trusted to run SHIELD and oversee everything it did. Of course, the fact that he then goes bad doesn't feel out of left field -- Redford sells it, bending his charisma into a darker turn, showing that his public face hides a darker evil, always beneath the surface. Hell, I think we've just figured out what drew Redford to the role.

I also have to note that I really like having Redford in this role based on his past movie history. He's been in two conspiracy thrillers, but All the President's Men and (our personal favorite) Sneakers. Both explore governments and the secrets they hide, so to have him come in and play a shadowy government operative trying to hide secrets makes for a great inversion of his own past history. It also allows the film to pull of his villain heel-turn and make it into an effective twist -- it's Robert Redford, so we're supposed to know the characters he plays. His casting was a great choice. 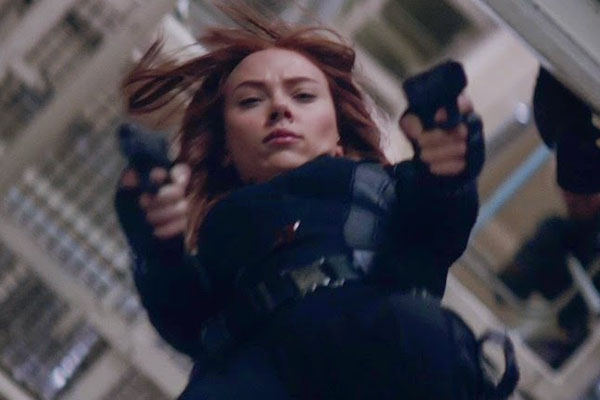 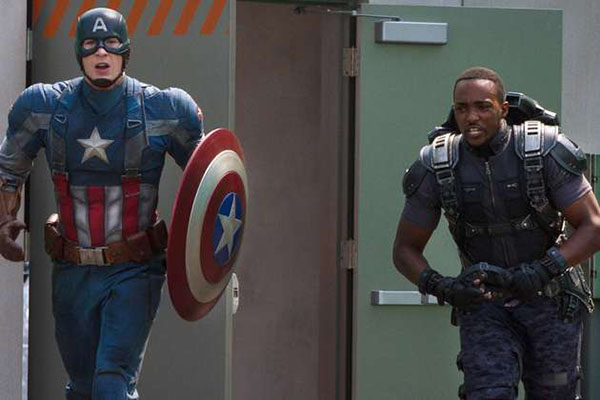 Of course, I would be remiss if I didn't also discuss Black Widow. Although the film is called Captain America, Black Widow is the de facto co-lead. She and Cap throw their lots in pretty early together, each for their own reasons, and she gets to be an active participant in all the twists and turns of the story. The movie nicely builds on her character from The Avengers, making her not only an effective shadow operative but also building her into a real character. Each of her appearances (from Iron Man 2 through to this film) have shown different facets of her -- her skills, her ability to blend in -- but this is the first film to really treat her as anything more than an agent, to get at her deeper core in an effective way. It's a meaty role for Johanson, and it clearly highlighted that Black Widow could lead her own movie.

It's just a real pity that, as of yet, Black Widow hasn't actually be give her own film. The Winter Soldier is a great vehicle for her and Marvel really needs to let the character out to do what she does best. I know they have a Black Widow film in early development but it could still get canceled along the way. This film clearly shows we need more of her, in larger roles, instead of just relegating her to co-stars on Avengers films (which is all we get from her after this, sadly).

And sure, we get some other great characters, from Anthony Mackie's new addition, Falcon, to Cobie Smulder's returning Agent Hill, and they're great as well. This movie has an absolute wealth of cast members selling the darker story and making it all work together. While you're watching Captain America: The Winter Soldier you're sucked in along the techno-triller vibe, enjoying the twists and turns and investing in all the story beats. It's a really masterfully made movie that expands (and explodes) the MCU in the process.

The only real knock I have against it is it's use of HYDRA. Specifically, I do have reservations about the idea that everything that's gone wrong with the world over the last 60-plus years can be blamed on a Nazi splinter group. Don't like what's happened? Don't worry, it's not because humans are sucky or that we've slowly been destroying ourselves through greed and indifference. It can all be blamed on Nazis! It's a questionable story beat to use in the movie, especially when the previous film also really didn't do much to explore HYDRA's connection to the greater Nazi threat of World War II. "Nazis are bad" is the only story beat there Marvel wanted to explore, and then they quickly shove it aside for superhero action. 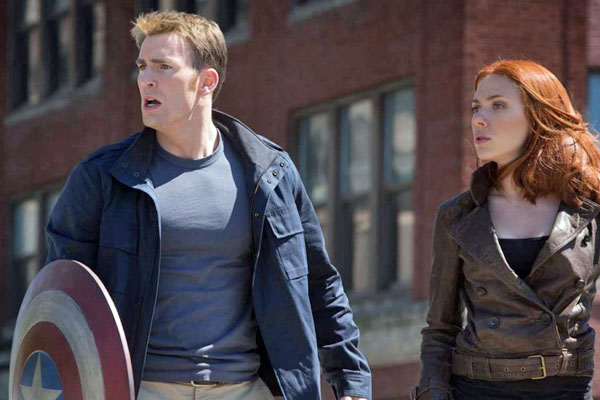 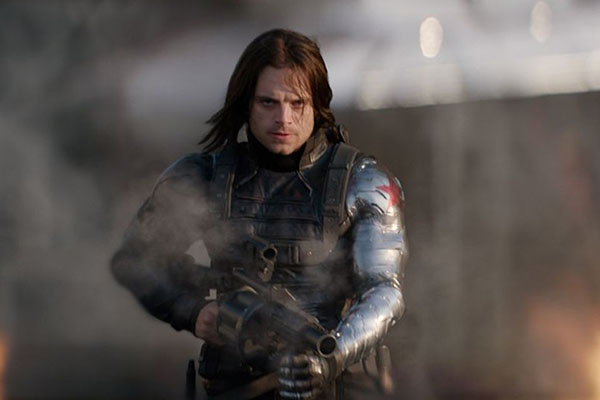 I get that this is a superhero movie, a work of popcorn meant to entertain everyone. No one wants to be bummed out while they're watching Cap punch people, but the Captain America films raise the Nazi threat both times and then just kind of sweep it under the rug. The movie thinks that all you need is a big, burly agent of justice to punch Nazis in the face and the day will be saved. As we've seen over the last couple of years, Nazis don't go away that easily, and punching them in the face doesn't solve the problem (no matter how cathartic it might be).

Still, overall I really enjoy this movie. It's a great film with an interesting story, one that I only have one real qualm about. And hell, maybe that won't bother you as much it gets to me. For the most part there is something to be said for letting Captain America rush in to save the day, to fight the Nazis in the MCU and expose all their sins to the light. It would just be nice if that were so easy in the real world.