Blade and the MCU

As I have noted here and on my Castlevania site, The Inverted Dungeon, I'm a huge fan of both vampire flicks and Blaxploitation cinema. When those two things collide, such as in the case of Blacula or the Blade series, I'm all over that. I own all those movies (and every other Blaxploitation horror film I can get), and I'm one of, like, five people that admit they saw Blade Trinity in theaters. This is my jam. 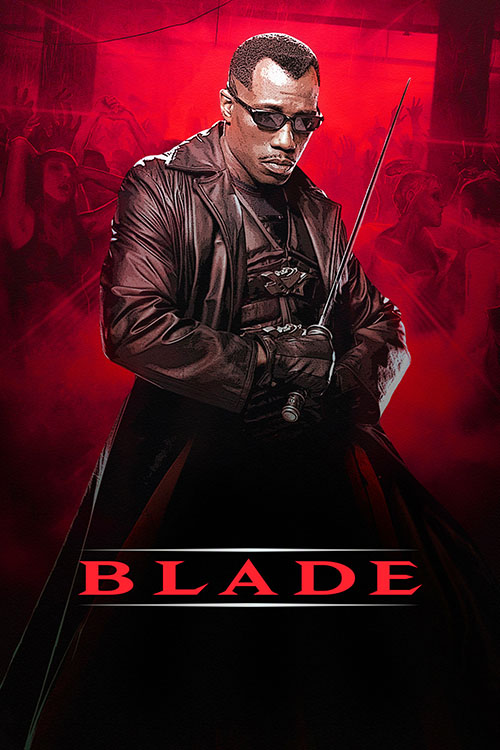 I am, however, conflicted by the recent reports that Wesley Snipes is in talks to reprise his role as the titular vampire hunter for a new film (or films as, apparently, two projects are being discussed), one that apparently not only ties into the old continuity but also the current slate of Marvel Cinematic UniverseWhen it first began in 2008 with a little film called Iron Man no one suspected the empire that would follow. Superhero movies in the past, especially those not featuring either Batman or Superman, were usually terrible. And yet, Iron Man would lead to a long series of successful films, launching the most successful cinema brand in history: the Marvel Cinematic Universe. films. Don't get me wrong, I'm all for a new Blade series and if, somehow, Marvel wants to tie that film into the MCU, then I see no problem with that. The MCU is a cash cow and obviously Marvel wants to tie as many of their properties into it as they can. Totally makes sense, and since most of the films in that franchise have been awesome, I'm happy to hear about Marvel's plans.

Of course, there's also the slightly cynical reason Marvel would clearly want Blade to appear in the MCU: Black Panther made a whole oodle of money, attributed to it being a "black" movie and tapping into an audience that has been underserved by the superhero genre. Since that's the case, why not make a new Blade movie and give that audience a second superhero to cheer for. I say it's cynical because this is clearly a capitalistic equation the studios are running based on Black Panther making every dollar ever. If The Panther Who Also Happens to Be Black hadn't made anywhere near what it did, five-to-one says Marvel would have looked over at poor, discarded Blade and said "audiences don't want black superheroes" and that would have been that.

It's sad, too, because the original Blade movies are great flicks. Well, okay, Blade Trinity is kind of ass, but credit goes to Ryan Reynolds for trying to fish a decently enjoyable time out of the dreck he was given. The first two films are still plenty good and the TV series was surprisingly watchable despite its low budget and being housed on Spike TV. On the whole, Blade is a great character who helped to show superhero movies could be money-makers back before Hollywood had fully embraced the cape-and-cowl crowd. Plus, make no mistake, he was one of the earliest black superheroes on the big screen, and while Black Panther should great credit for helping to stomp down that wall, Blade was there first, leaping over in his black leather jacket, looking all awesome.

My concerns for the project are two-fold, though. Firstly, I'm not entirely on board with the current plans, as discussed publicly by Wesley Snipes, about bringing the actor back for the role. Sure, he was truly bad-ass in the first two films, but apparently he was so disinterested with all aspects of the third flick that he just hung out in his trailer for most of the shoot. The producers had to hire a body double for interactions with other characters, which is one of the many reasons why Ryan Reynolds gets so much screen time: he showed up, was on set the whole time, and was willing to film his scenes as needed. He gets so much time to riff in the movie and do his things because he was the professional willing to do his job. Do we think Snipes is going to be any more interested in a new film? Maybe, but why take that risk? 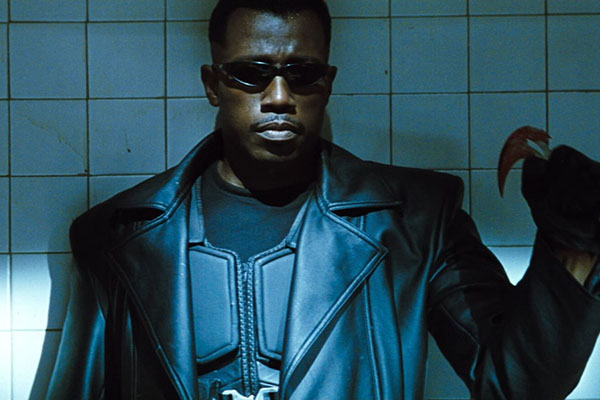 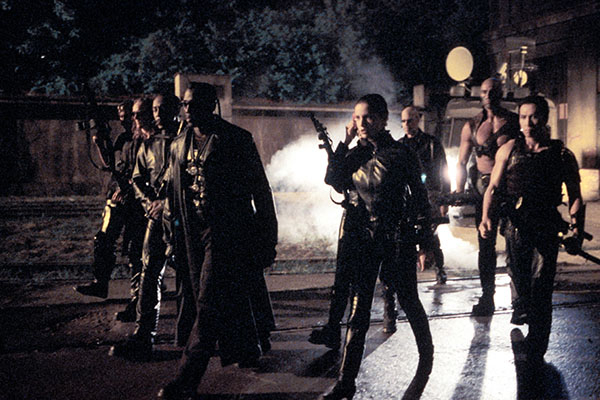 As Blade: The Series showed when it recast Snipes with Sticky Fingaz for the TV series, Snipes is not the only person that can play the role of Blade. Sure, I will fully admit that Mr. Fingaz took a little while to get settled into the role, so the earliest episodes are a tad rough. But the series picks up, and Fingaz really gets into being Blade by the end of the season (which was also the end of the series). He did his job well, being a bad-ass on the small screen. If someone other than Snipes can do the role, and do it without being a prima donna, why take the risk on Snipes again?

Also, and to be slightly indelicate, Snipes is now 20 years older than he was when he first donned the jacket and Ray-Bans of the vampire hunter. Blade may not be immortal (being only a half-vampire), but it's arguable about if he would age at a normal rate (if at all). Snipes is getting up there and no longer looks like a young man, so should he be playing a potentially-immortal character now? Wouldn't that be weird?

Secondly (after I went on for some time on my first point), why tie the MCU into the old Blade continuity. Beyond screwing up the navigation I have at the bottom of this page, forcing me to renumber all the MCU titles, there are implications for the continuity of the movies if they bring in the three old Blade flicks (and the TV spin-off).

Sure, as movies in the MCU have shown, there have been superheroic people around long before the first MCU flick, 2008's Iron Man, but never once has the kind of mystical BS of vampires been addressed. Dark Elves and Sorcerers, sure, but vampires aren't the kind of thing we've seen yet. Implying they've been around, in the background, is one thing, but then to take all the events of the Blade films, like the great plague he unleashed at the end of Trinity, and then tying them into the MCU and being all "lol, no one noticed this" seems like a bridge too far. Why shoe-horn in those films when you can just fresh-start them, downplay the vampires as cool, mysterious agents with their own super-secret society, and then slowly ramp up the action from there without all the needed continuity? 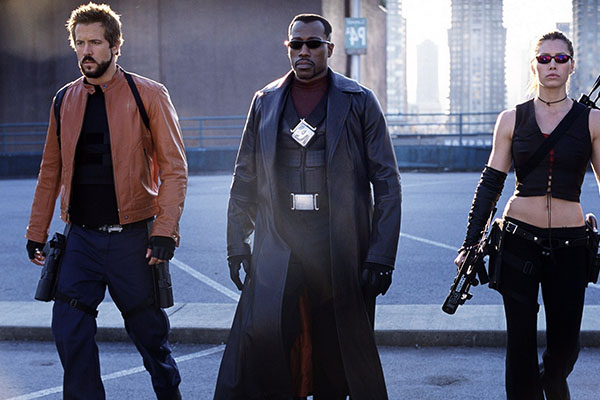 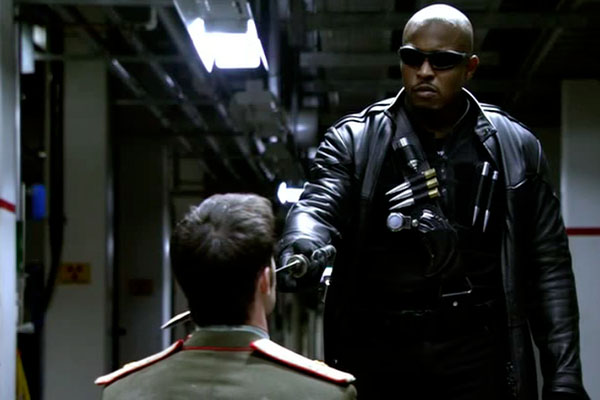 But then, if the plan isn't to import in the old Blade films to the modern MCU, why bring back Wesley Snipes at all? If you use the actor, you want the old continuity. The two just go together.

Now, it's entirely possible Wesley Snipes was just talking out of his ass. Maybe he got a meeting with Marvel Studios, they said one thing, he heard another, and then he spouted off about it because he was excited for a project (or projects) that weren't really there. Or it could be that one of the two projects is a continuation of the old Blade continuity with Snipes in some role (like maybe an animated series with him as the lead voice actor) while the other is an MCU reboot that doesn't use Snipes (at least, not in the main role as Blade, although I wouldn't rule out a wink-nod cameo in that case). And if that's the case, I say, "great!" Those are projects I'm 100% on board with.

Just, Marvel: please do not try and shove the old Blade movies into the MCU. It's not needed and you're better off giving Blade a proper fresh start. He deserves it, and we deserve more Blade.