To be frank, the first time I saw Doctor Strange, I wasn't impressed. Despite all it's cool visuals, adding magic into the Marvel Cinematic UniverseWhen it first began in 2008 with a little film called Iron Man no one suspected the empire that would follow. Superhero movies in the past, especially those not featuring either Batman or Superman, were usually terrible. And yet, Iron Man would lead to a long series of successful films, launching the most successful cinema brand in history: the Marvel Cinematic Universe., the film still felt rather derivative. It didn't just seem to cobble ideas from other, better Marvel movies, but from films like Inception as well. Sitting there in the theater, I had the thought that Doctor Strange would have been a much more interesting movie if it had been released at the start of the MCU instead of eight years in. 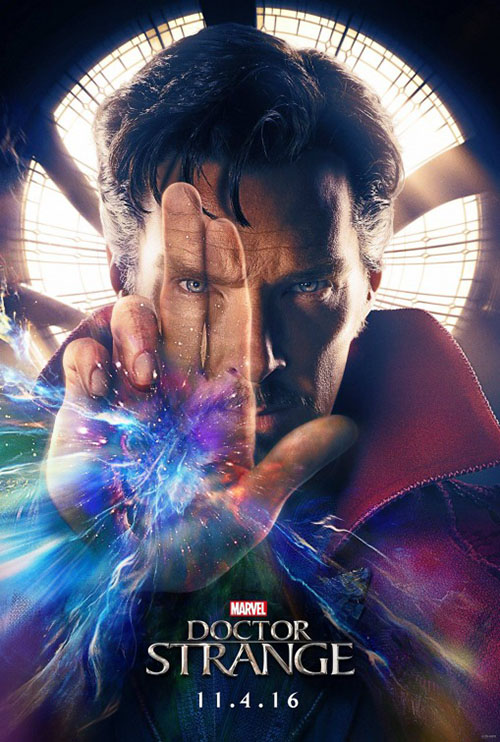 Over time my opinion of the film has been tempered. This happens with a lot of movies for me: once I know what's going to happen, the surprise of the plot itself out of the way, I can start finding smaller pleasures in the film. Often this allows movies that didn't catch me the first time around (such as Doctor Strange or Mystery Men) to grow in my appreciation. While the film itself still feels a tad derivative, even now on my third viewing, I generally like the film much better now than I did at first blush.

The big problem I had with the film at the time of release is that Doctor Strange (Benedict Cumberbatch) feels like a magical version of Tony Stark. A rich guy with a giant ego, Strange is one of the foremost brain surgeons in the world. Unfortunately for him, a car accident crushes his hands, leaving him unable to operate ever again. Desperate for find some way to restore his abilities, Strange turns to every bleeding edge treatment and alternative medicine he can find. This eventually takes him to Kathmandu and the temple of the Ancient One (Tilda Swinton). There (after finally shaking the last of his arrogance), Strange learns the mystical arts, becoming a protector of the Earth in the process. Which is good because the evil monk Kaecilius (Mads Mikkelsen), a follower of the extra-dimensional demon Dormamu, is looking to bring down the defenses of Earth so Dormamu can invade. Strange will have to stand with his brother monks to protect the world at any cost.

So yes, initially Doctor Strange follows a similar arc to the first Iron Man -- both are egotistical playboys who only become heroes after a terrible incident eventually strips them of their ego. They both rebuild themselves (Stark maybe a little more literally with his suits) and find that they want to become protectors of the world instead of just making money on pain and strife. And, as with some many Marvel films, both end up fighting evil versions of themselves that their own technology/powers helped create. The broad strokes of the two movies run parallel for the first half of Doctor Strange, to be sure.

And that's a problem because Cumberbatch, for all his skill as an actor, is nowhere near as charismatic as Robert Downey, Jr. Tony Stark's egotistical playboy shtick comes off as charming in Downey, Jr.'s hands, where as it just feels alienating and cold when Cumberbatch tries it on for size. But then, that's the kind of character Cumberbatch was playing before this film -- his Sherlock Holmes (from the BBC series Sherlock) is a cold, distant, fairly alien person, a far cry from the kind of person you can actually relate to. That's the kind of person Strange starts off as, so it's much harder to bond with the character as he goes from playboy to zero, pushing everyone away in the process. You kind of hate the guy, which is a hard place to be at with your hero. 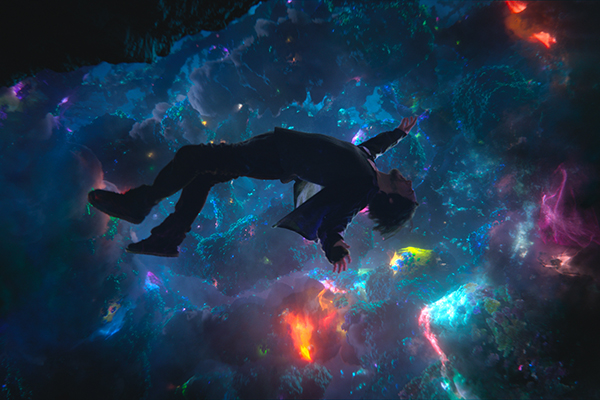 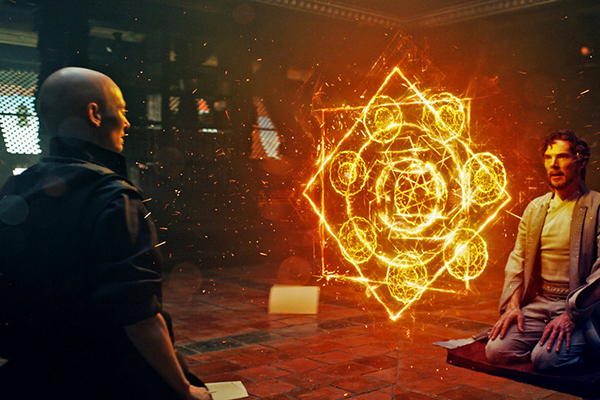 Thankfully the film does a good job of rebuilding Strange into someone you actually like by the mid-way point. Stripped of his ego and artifice, Cumberbatch is able to find some charisma in the character, making him funnier, softer, and more relatable. Of course, he's aiding in this regard by a good collection of side characters to help him find his soul. Chiwetel Ejiofor is a fantastic actor in any role he's given, and he's able to imbue his Master Mordo with warmth even when he's training (and abusing) Strange (I honestly wish he'd been given the title role of this film as I think he has the right level of charisma to make the early scenes of Strange work a whole lot better). Tilda Swinton is, of course, great in any role she gets as well, and she's an interesting choice for the Ancient One, bring her weird, almost alien qualities to the role. And Benedict Wong is able to be both distant and funny at the same time as his Master Wong. It's a solid cast that works well together, elevating the movie.

That said, we do have to note a couple of sour notes in the cast. The first is Tilda Swinton, which sounds weird after I was just praising her, but this really isn't her fault specifically. Hollywood has a terrible problem with white-washing, making characters that should be be played by a minority actor and casting a white person for the role. In this case, the leader of an ancient temple in Kathmandu (the capital of Nepal) should, at the very least, be played by someone of Asian descent (if not specifically Nepalese heritage). Swinton is a great actress but she's not Asian, so having this obviously white woman (as strange and alien as she usually comes across) smacks of white-washing. Maybe Marvel wanted to avoid any racist connotations from the original Doctor Strange comics, but they could have easily done that by just writing the script better, not by trying to avoid the issue entirely with a white actor.

On the other hand, I don't have an issue with the casting of Mads Mikkelsen as Kaecilius. My bigger issue here is that Mikkelsen, a great actor in his own right, is given almost nothing to do with his character. This is criminal considering how much charisma and menace he brought to the role of Hannibal Lecter on the NBC series Hannibal. But, like with many MCU villains, Kaecilius is just there to serve the role of someone to fight while all the focus is placed on the hero. Often Mikkelsen just seems bored in his role, which he should be since there's nothing to his story. We get hints of a deep, tragic back-story for the character (someone who lost his whole family and came the ancient temple for guidance, which might actually fuel his need to seek our Dormamu and find a way to change history) but that's all subtext to a subtext that's never given any weight in the film. It's tragic and a waste of a fine actor.

And then we have Rachel McAdams as nominal love interest Christine Palmer. Here McAdams is able to invest deeply in her character, getting some great scenes at the start and the end of the movie. Sadly, the film seems to realize that a love interest isn't all that necessary for Strange's growth as a character. What could be a grounding force for our new magician (not unlike the relationship between Pepper Potts and Tony Stark) is, instead, pushed to the side to give more focus to the magic and the man. I really like the work McAdams does here, but her character is brushed aside too easily and could have simply been removed entirely without it really affecting the movie at all. 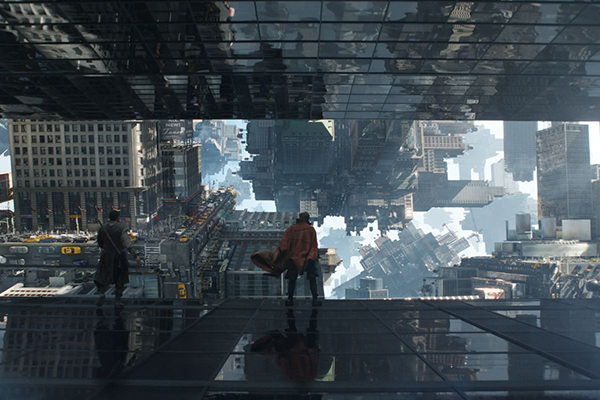 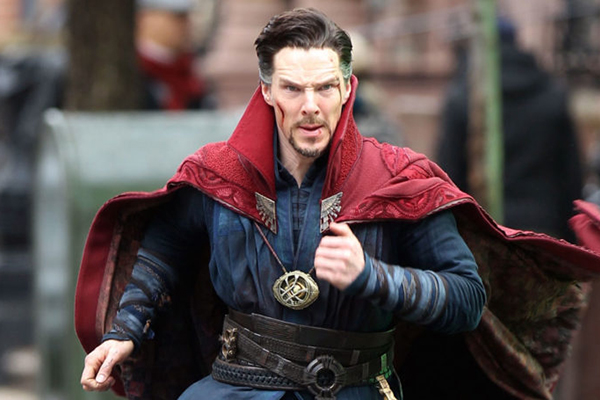 Despite these pretty obvious flaws, though, I find myself enjoying the movie more and more each time I go in. Partially that's because the film is very sumptuously made, with stunning, mind bending visuals. This is one of the better Marvel films when it comes to the visuals, with few of the obvious bad CGI moments that always seem to plague these productions (such as the terrible Hulkbuster suit moments in Avengers: Infinity War). This film is truly a treat for the eyes once it gets going with enough gorgeous star-scapes and twisted cityscapes to fill the next few Guardians of the Galaxy and maybe another Inception along with.

It's also a very funny movie once Strange joins up with the Ancient One's temple. Stripped of his artifice, Benedict Cumberbatch is able to find the humor of the character, and the script becomes a lot lighter and more enjoyable. There were plenty of moments where I found myself laughing, caught up in the humor of the situations and Strange's pithy one-liners. He's still not as amusing as Tony Stark, but he could easily get there (such as in his sequel in Phase IV of the MCU). The character has room to grow, but I like the place he ends the film at.

Now, if they can just give him a better villain to fight, and maybe find a way to integrate Rachel McAdams better, the sequel could be a real winner. This film is good, but it could be even better with a few tweaks.