I will admit that I've never been much of a Doctor StrangeSometimes thought of as the magical version of Tony Stark, Doctor Strange is the "Sorcerer Supreme", a mystic who was once a brilliant neurosurgeon until an accident robbed him of the use of his hands. But he found a way, in Tibet, to gain back not only his hands, but so much more... fan. This isn't a reflection on the character, mind you, simply the fact that I was a DC ComicsOne of the two biggest comic publishing companies in the world (and, depending on what big events are going on, the number one company), DC Comics is the home of Superman, Batman, Wonder Woman, and just about every big superhero introduced in the 1930s and 1940s. fan and haven't ever really read much Marvel. The few comics I've read, things like the Ultimate Comics AvengersMarvel's answer to DC's Justice League, this team features many of Marvel's biggest superheroes working together to protect the world and avenge its evils. (The Ultimates) or the occasional SpidermanSure, DC Comics has Batman, Superman, and Wonder Woman, but among the most popular superheroes stands a guy from Marvel Comics, a younger hero dressed in red and blue who shoots webs and sticks to walls. Introduced in the 1960s, Spider-Man has been a constant presence in comics and more, featured in movies regularly since his big screen debut in 2002. -- were pretty mainstream for the publishing line while Doctor Strange (who didn't go through eight years of medical school to be called "Doctor Normal") was far from mainstream. Plus, considering the comics I read, the Doctor always seems like Marvel's version of Zatara, and I didn't really need to read a copy of another character. 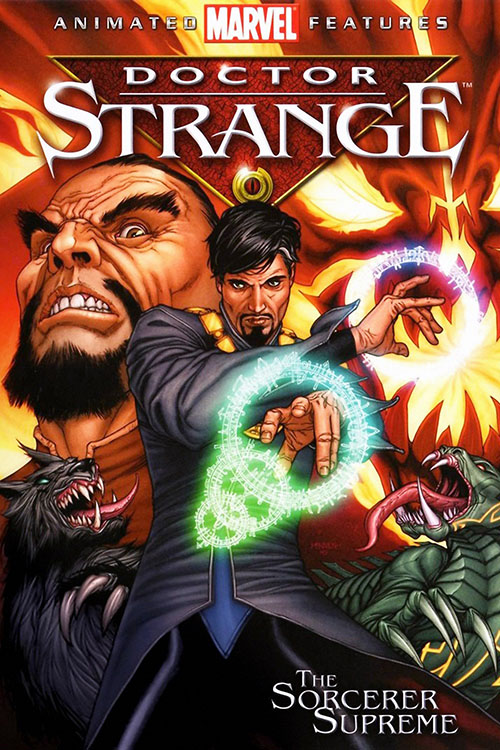 That meant that the first exposure I had to the character was the 2016 Marvel Cinematic UniverseWhen it first began in 2008 with a little film called Iron Man no one suspected the empire that would follow. Superhero movies in the past, especially those not featuring either Batman or Superman, were usually terrible. And yet, Iron Man would lead to a long series of successful films, launching the most successful cinema brand in history: the Marvel Cinematic Universe. film, Doctor Strange, and while Marvel is good about keeping their characters in the films aligned to at least the spirit of their comics alter egos (aside from the occasional Mandarin), I was never sure if the Doctor Strange from the movie was really true to the character at not. And my suspicions that he might have been just a little off were confirmed with the 2007 animated film, Doctor Strange: The Sorcerer Supreme, which takes a decidedly different approach to much of the Doctor's events.

The basics of the character are the same. Strange is a brilliant neurosurgeon, gifted with his hands but arrogant and conceited. He only takes the cases that interest him that will bring in money for the hospital (and himself, too). Then, one night, Strange ends up in a horrible car accident that leaves his hands crushed. Reconstructive surgery isn't able to repair the damage -- while his hands can do some very basic tasks he's largely unable to resume anything close to his previous life. Out of desperation, Strange searches out every alternative treatment he can find, spending all his money and going completely broke. Destitute, he ends up at Kamar-Taj, the monastery founded by the Ancient One, in hopes that whatever alternative treatment is available there can fix his hands. But instead of treatment, Strange finds enlightenment, and instead of becoming a doctor once more, Strange becomes a sorcerer of dimensional magic.

Strange's nemesis is Dormammu, and extra-dimension beast of pure evil who looks to take over (and utter trash) Earth. In The Sorcerer Supreme, the warriors of Kamar-Taj, led by Wong and Mordo, fight beast after beast sent by Dormammu to attack the gateway between worlds, the Sanctum Sanctorum - if the Sanctum falls the gateway that protects Earth from the evils of the Multiverse will fall and Dormammu will rise. The beasts keep coming, and more and more of the warriors of Kamar-Taj fall. Will Strange be ready in time to become one of the monks and help defend Earth from Dormammu, potentially becoming the next Sorcerer Supreme?

Watching Doctor Strange: The Sorcerer Supreme, I had to credit the animated film for at least giving us an interesting story that didn't feel like a precursor to a much better version in the MCU. The magic presented in this film, and the things Strange and the other monks can do, feels much more like magic (instead of a weird form of physics manipulation, like in the later movie). It's very comic book-y, sure, but considering the previous film in this series, The Invincible Iron Man, had that hero fighting elementals and an ancient sorcerer, real magic doesn't feel out of place in this continuity. 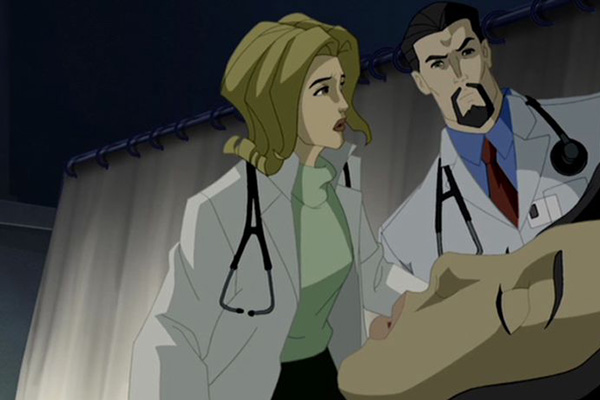 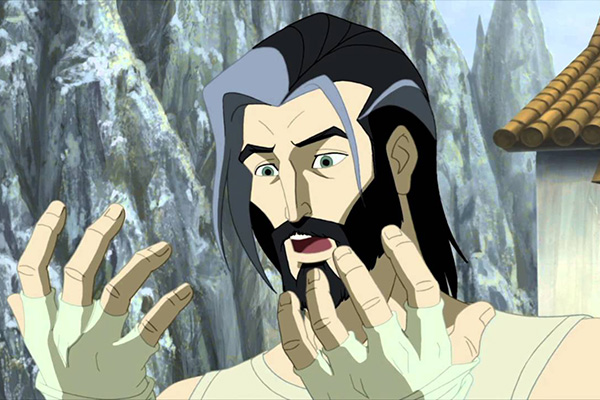 That said, while I look of the magic in this animated film, I don't feel like Strange really earns his place as a sorcerer. Sure, he gets punished a bunch early on after he loses the use of his hands, but the be frank Strange came across as a total ass in the early going of this movie, so I didn't really feel bad for him. The animated version of the character doesn't have the charisma or charm of Benedict Cumberbatch and, honestly, that hurts the character a lot. It's just hard to care about him at all.

Even at Kamar-Taj, Strange never really feels like he's learning humility or contrition. He starts out an ass, only asks for power after he has it revealed to him, and then spends a lot of time being bitchy about the work he has to do to become a better person. He's given all the help he needs, and then ends up the Sorcerer Supreme because... well, that's never really established. Somehow he's special, I guess?

Plus, lets be honest, Doctor Strange's origin story smacks a bit of "white savior syndrome". All of the other warriors at Kamar-Taj are obviously of Asian descent, but the only one that can be the Sorcerer Supreme and save the word is some white dude who just rolls in off the street, not any of the warriors that have been training at the forbidden city for years. It's a little strange (no pun intended), although considering the era the character was created (the early 1960s) it's not entirely surprising. It's a credit to the MCU

The movie, honestly, is at its best when all the warriors are gathered together, fighting whatever beast has arrived to try and storm the Sanctum. The movie draws from an imaginative set of beasts for the warriors to fight, and the creativity of these creatures, coupled with the diversity of magical abilities of the warriors, makes the actions sequences quite fun to watch. This was the first of the Marvel Animated FeaturesBefore the Marvel Cinematic Universe was even a thing, before Marvel could even hope their theatrical aspirations would take off, the company tried to launch their heroes with a much more modest idea: a series of animated features starring the heroes Marvel had access to. to really get the action right. The movie isn't without its flaws, but it is at least fun to watch for the superheroics. 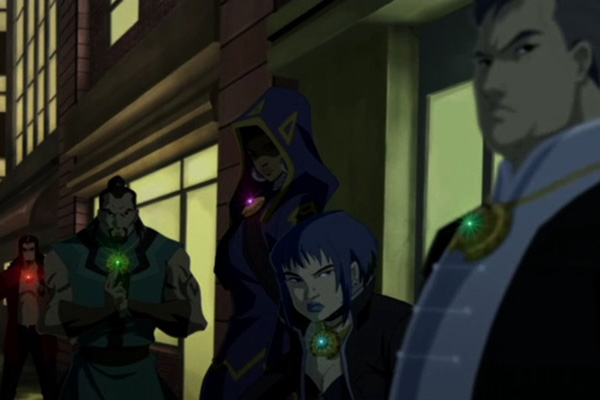 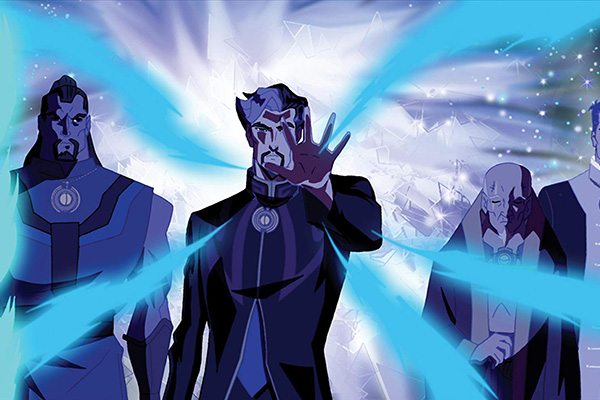 Doctor Strange: The Sorcerer Supreme is a marked improvement over the films to come before it in the animated series. It's still not great but it is fun, and certainly better than the other three movies I've suffered through so far. I do think the 2016 MCU film does a better job with the character, so while that film itself not perfect (and may not be the most accurate version in comparison to the source material) it's a better Doctor Strange adaptation. Still, for once I finished one of these movies and didn't immediately hate it after and I consider that a big win.