It's fair to say that I'm not the biggest fan of the The HulkOnce the brilliant Dr. Bruce Banner had dreams of making the world a better place by building super soldiers to act as a shield for all mankind. Then an accident at his lab bathed him in gamma radiation. Now he has a living nightmare, as a big green guy lives within, just waiting for the rage to take over so he can be free.. While I know the character has fans, to me the big green monster has always seemed rather one-note. Sure, it's the interplay between Bruce Banner and the Hulk, that need to keep the monster contained while also finding a way to live his own life, that drives the stories. But you know, in each and every story about the big guy, the Hulk will come out, so no matter how much stories might try to dress it up, the formula is pretty locked in: Banner shows up somewhere, tries to keep the monster bottled up, fails, and then the Hulk smashes. Rinse and repeat. 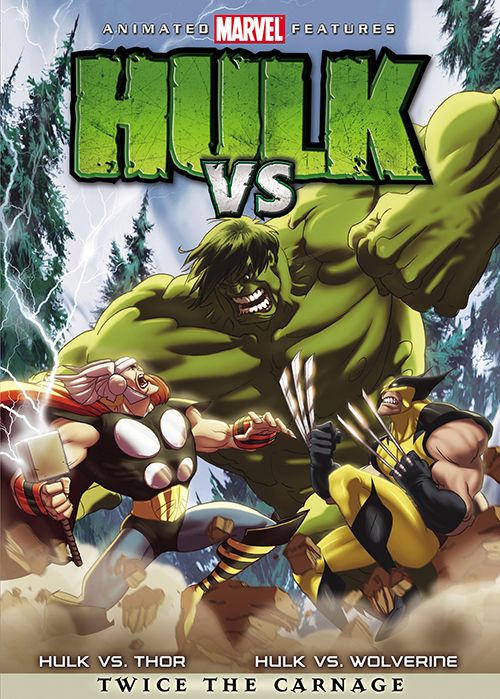 There are stories that take the Hulk in other directions (Thor: Ragnarok for one, and I'm hopeful the next entry in the Marvel Animated FeaturesBefore the Marvel Cinematic Universe was even a thing, before Marvel could even hope their theatrical aspirations would take off, the company tried to launch their heroes with a much more modest idea: a series of animated features starring the heroes Marvel had access to. series, Planet Hulk, will be another), but it takes a special kind of story to break the big guy out of his formulaic loop. Hulk Vs., which is really two short stories packaged together as one "movie", is that that feature. It puts the focus less on Hulk than the characters around him, using the big green monster for the one thing he's good at: smashing.

Odin, the All Father and ruler of Asgard, occasionally has to take a snooze. His power is so great that it drains the god and so, periodically, he has to rest for an extended period of time, drawing his powers back into himself. During the phases Asgard is left without Odin's protection and it's up to ThorBorn to one day by the king of Asgard, Thor is the god of thunder. His power is divine but can be tapped into by whoever wields his hammer, granting them the powers (and title) of Thor., and his merry band of heroes, to stop the invasion of Ice Giants, Trolls, Dwarves, and whatever else might lurk in the Nine Realms of reality that would want to destroy Asgard. And you can add to that list LokiThe half-brother of of Thor wouldn't be considered as big of a character as he is were it not for Tom Hiddleston. That actor, performing Loki in a series of films for the MCU took an also ran villain and made him into one of the most popular characters in the run., Thor's half-brother, who lusts for the power of the Throne of Asgard (killing is brother in the process is just a bonus).

But Loki knows he can't just take Thor in a one-on-one battle. Instead he uses his magic to summon Bruce Banner to his side and then, via dark means, separate the Hulk from Banner. Loki then drops Hulk onto Asgard, controlling the beast with his own magic. Oh, and he kills Bruce so that the beast can never be put back in the "bottle". Now Thor has to find a way to defend Asgard from the Hulk while also resurrecting his host so that the two, beast and body, can be one again.

Of the two films in this package, "Hulk vs. Thor" has to deeper story. It plays to the animosity between Thor and Loki, delving deep into the mythology of Asgard, Niflheim, and all the realms and heroes involved. It's an interesting exploration of Thor's world and it gives and interesting perspective on this whole land outside the version we've seen in the Marvel Cinematic UniverseWhen it first began in 2008 with a little film called Iron Man no one suspected the empire that would follow. Superhero movies in the past, especially those not featuring either Batman or Superman, were usually terrible. And yet, Iron Man would lead to a long series of successful films, launching the most successful cinema brand in history: the Marvel Cinematic Universe.. That said, the film doesn't do a very good job of making Asgard interesting. Despite being set in the land of the gods the story doesn't really do much with it -- Asgard is little more than a pretty backdrop. More exploration is given to Niflheim (and Hel), but even then its cursory. The film has a lot of ground to cover and only 45 minutes to do it, so while it's nice to get these cool locations and interesting characters, it would have been nice if we could have spent more time with them. 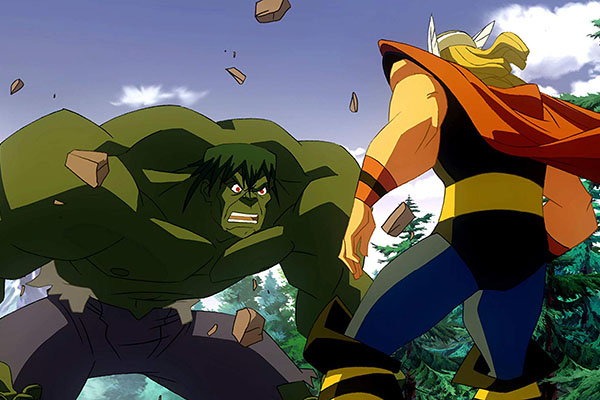 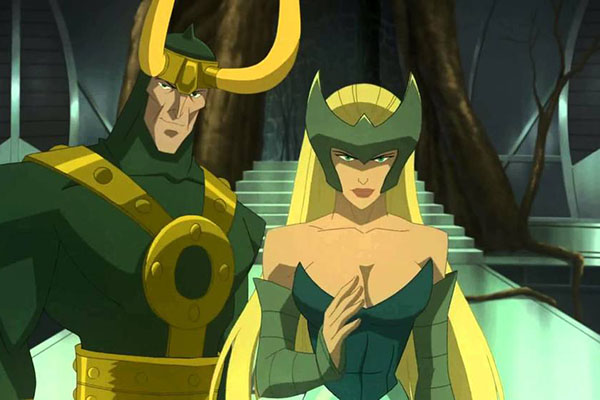 The big winner here is Bruce Banner who, freed of the Hulk, finally gets to have an afterlife free of the big guy. These are the most poignant (and, based on the ending of the film, the most sad) sequences in the film and shows the kinds of stories that can be told when Bruce is able to be more than just a conduit for the Hulk. Sadly, it comes in a film that spends most of it's time watching the Hulk smash things. And smash he does, a lot. It's his job, and he does it well.

Fact is, though, that the Hulk isn't much of a character, especially when he's in his "big green rage-monster" mode. There have been versions of the Hulk that have made him smart and interesting, but this version here is big and dumb and not much else. He's effective as a tool to motivate the story but he's hardly a character in his own right, not interesting enough to carry his own movie. While he does produce some pretty decent action it's hard to invest in seeing a big, hulking, invincible beast go on a rampage in a locale we barely know -- there just aren't any stakes.

I appreciate the effort that was put into this tale but, sadly, the film falls apart due to the constraints of the story and the time available. Maybe if this could have been a feature-length film the story could have worked better. More time spent on character development, both for the heroes and the villains, would have aided this story a lot.

This is certainly the shallower of the two films, with much less in the way of plot. Oddly, though, it's also much more fun if only because it knows exactly the kind of movie it wants to deliver: one where WolverineAlthough not one of the original X-Men, Wolverine is certainly the most popular, even before he was played, to much acclaim, by Hugh Jackman in the Fox film series. and the Hulk beat the shit out of each other for 45 minutes. And, in that regard, the film delivers. It just doesn't really have much else going for it.

Logan (aka Wolverine) is called in by a paramilitary organization to hunt down and stop a giant beats that's been roaming he Canadian wilderness. Dropped off in a remote area, Wolvie does some tracking before stumbling upon Bruce Banner, the nerdy guy who, Logan soon realized, is the host for the Hulk. Hulk breaks free and the two warriors battle it out for a time before they are interrupted by Sabertooth and Deadpool, agents for the Weapon X project.

It seems that while Wolverine was done with Weapon X but the program wasn't done with him. Now kidnapped by the group, Wolverine has to break free, and free Banner as well before they find a way to control the Hulk and have the ultimate killing machine on their payroll, while battling past all the villains in his way (including Lady Deathstrike and Omega Red), all of whom want to kill our Adamantium-coated mutant hero. It's a battle to the death for all involved.

There's a reason why Wolverine is one of the most popular heroes in the Marvel stable, and this film is a clear illustration: even in a crappy, rote affair such as this, Wolverine can kick ass and take names, all in a fun and amusing manner. A film dedicated to smashing heroes and villains together like action figures is the right kind of story for Wolverine. Sheer, uncontrolled violence is his bag, what he was made to do, and (when written properly) he does it exceptionally. His portion of the story is a lot of fun. 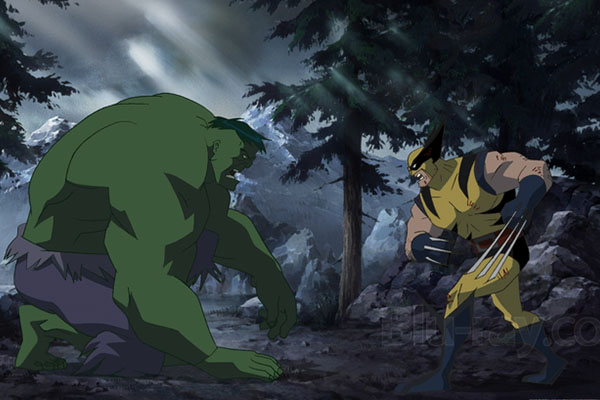 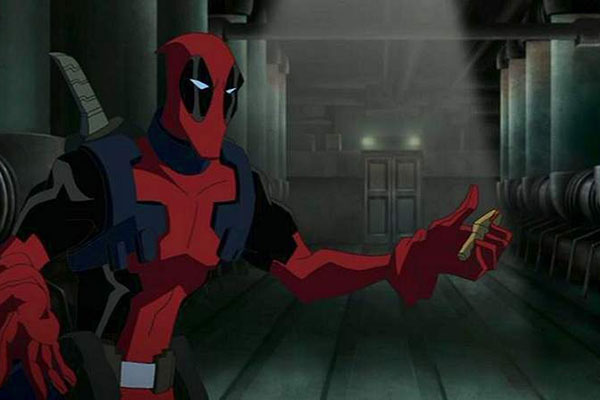 I just wish the rest of the characters where anywhere near as interesting. Yes, the Hulk is the Hulk and we know exactly what to expect from his (hint: smashing). The rest of the crew, though, is pretty boring. Sabertooth has none of the scenery-chewing charm that other actors have given him in the Fox X-MenLaunched in 1963 and written by Stan Lee and Jack Kirby, the X-Men featured heroes distinctly different from those featured in the pages of DC Comics. Mutants who didn't ask for their powers (and very often didn't want them), these heroes, who constantly fought against humans who didn't want "muties" around, served as metaphors for oppression and racism. Their powerful stories would form this group into one of the most recognizable superhero teams in comics (and a successful series of movies as well). films, Lady Deathstrike is one-note and tedious, and Omega Red has so little development to his character that he barely even qualifies as existing in this film.

The film criminally under uses Deadpool, which is probably the worst sin of all. Deadpool should be a constant quipping, death-serving, laugh riot. Here, though, he's just kind of... tedious. He gets a couple of quips, sure, but for the most part he's just kind of in the background, being annoying more than anything. It honestly would have been better if they hadn't included him at all in the film -- would have been a better use of the Merc with a Mouth than what we have here.

And yet, despite all this -- the shallow characters, the rote story -- the film does deliver on the one thing it needed to: action. It's basically a 45-minute action sequence, and in that regard it works. It's not deep, it's not looking to explore anyone or tell a magnificent story. It just wants to put Mr. Claws up against the Big Guy and have them beat the crap out of each other, and it does that, consistently, for the length of the film. If all you want out of a Hulk movie is to see him smash anyone and everyone for the whole of the movie, "Hulk vs. Wolverine" is you movie.