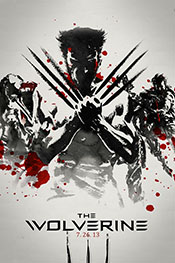 I recently picked up a copy of The Wolverine. It was an impulse buy fueled mostly by good reviews and not fond memories of X-Men Origins: Wolverine. In fact, if anything could have stopped me from buying the new Wolvie flick, it would have been the previous cluster-fuck of a film.

For a while there it seemed like superhero movies could do no wrong. X-Men and Spider-Man each launched successful Marvel film franchises, raking in boodles of money while still being fun and "comic-booky". Batman Begins came along and brought a strong, serious take on Batman to the screen (feeling less like a comic book movie and more like a charcater study of a depressed individual that feels the need to dress like a bat to compensate for the loss of his family... which, let's face it, is the core of Batman). And this great "comic book movies can work" vibe was increased by X2: X-Men United (seriously, Hollywood, just name your movies consistently, please!). X2, free of having to establish the whole cast of characters again, managed to improve on the first film while still feeling like a proper "summer adventure" movie.

Unfortunately, the series took quite a turn with the third flick X-Men: The Last Stand (no "3" in the title, which just annoys me -- just call it X3 and at least they'll all line up on my movie catalog spreadsheet). X3 (hah!) tries to be big and deep and all the things people attribute to X2, but it's just bad. It's just a bad movie. I haven't even bothered watching it in years (and I've gone back to X1 and X2 repeatedly), and primarily that's because when it's not trying to pull of laughably bad action set-pieces, it's getting down to the main plot, which lacks nuance and is, basically, just boring. Jean Grey is alive, but goes bad, because her mutant power makes her a psychopath, so she kills people and teams up with Magneto and tries to end the world til she dies again. The end.

Truthfully, I didn't even realize I remembered as much of the movie as I did. I could have sworn I tried to block it out. Speaking of...

After that tediousness of X3, it's hard to say that I had any hope for the prequel movie, X-Men Origins: Yes Wolverine Can! That XO: Wolverine was even laughably worse than I could have anticipated certainly threw me. There are countless movies I'll willingly watch again if my only other option is XO: Wolverine. Like, name any movie, and I'll probably watch it before I give XO:W a second chance.

And yes, I have, effectively blocked out the movie. I know it has something to do with Wolverine getting his metal platted body, and there some stuff with Gambit, and... uhm... Canada. Honestly everything after the opening credits has flitted from my brain, and I think everyone can agree this is for the best.

So yeah, why did I bother watching the new movie, Wolverine 2: Electric Boogaloo? Good word of mouth, mostly. The way I saw it, by now everyone knows how bad the first Wolvie flick was. If they not only willing sawWolvie 2, and stated that they liked it, well, it had to be worth a shot, right?

It was. Even anticipating a half-way decent flick (an incremental improvement over the excrement of its predecessor), The Wolverine is a drastic improvement in every sense of the term.

The first thing the film gets right is ignoring X-Men Origins: I'm the Wolverine, and that's Okay! Everyone involved seemed to agree that the best thing was just to ignore the movie is even in the same continuity (a trick X-Men: First Class also pulled), and move on with making a good Wolvie flick. The second thing they did was to learn the lessons from the failed first movie. What lessons:

1) Focus on Wolverine. Don't make this about all the X-Men. Wolverine didn't meet most of them until he ended up with the team in the first flick (or, at least, doesn't remember it). If you're going to make a movie about Wolverine, make it about Wolverine.

2) Give us a plot we haven't seen on screen already. XO: Wolverine Can't Lose was basically about how Wolverine got his adamantium armor (I think, and you can't make me watch it again!). We already had that story -- it was basically Wolvie's arc in X2. Why the hell did we need to see it again? I mean, even the villain was the same, so it was the exact same story, just reheated!

So what The Wolverine does is remove Wolvie from the contemporary U.S., transplants him to Japan, and then only shows two other mutants total in the rest of the flick (and they both work in service to the characters and the plot). And heck one of those two mutants only has the ability to see a very limited slice of the future (when people will die) -- she doesn't even get the ability to change the future, just see it. That's not exactly a useful power (just interesting).

Well, okay, Jean Grey shows up as well, but she's really just a specter in his head (and is truly just Wolverine's own mind fucking with him). She doesn't exist, and isn't going to be reborn yet again by the end of the movie. Thank gods.

Oh, and Wolverine can't heal anymore. Something happens to his power in Japan, and for most of the flick Wolverine can actually feel pain (and possibly die of bloodloss). Has Wolverine finally lost his powers? Can he really die? Will he be able to save the young heiress?

Gotta give them credit: that's not the usual X-Men plot. It's surprisingly grounded, without a lot of talk of apocalypses (and ages there-of). And I think that's what serves the movie best (and why I had fun watching it). This is a movie that takes the concept of a man with metal claws that can come out of his hands seriously, and yet never gets so caught up in the "how can this effect the world?" question. Previous X movies were all about grand schemes to kill all the mutants. here, humans know mutants exist, but it's not about the mutants -- it's about money, power, and birthrights. It's a small scale adventure that just so happens to star Wolverine.

And for that, I happen to think it's one of the best X-Men movies yet.