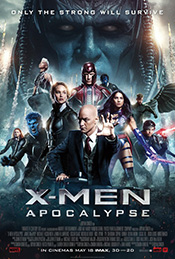 Got to see X-Men: Apocalypse today and I have two major take-aways from the movie. 1) It's nowhere near as bad as some reviews are making it out to be and 2) 3D effects add nothing to movies like this.

Let's start with the movie itself. X-Men 6... or is this X-Men Pre-3? It's so hard to know at this point since X-Men 4, First Class, was a prequel to the whole run that didn't, in any way, feature actors from the later timeline (substituting in James McAvoy for Patrick Stewart and so forth). That was fine on it's own since We could all just think of it as X-Men 0 and pretend the case was closed. But then that movie got a sequel, Days of Future Past, that was also a sequel to the first round of X-Men movies as took place, partly in the past and partly in the very far flung future of the whole series. Did that then make First Class #4 and Days was #5, or was Days then First Class II and... whatever.

So, X-Men 6 concerns itself with the rise of Apocalypse. He's a very powerful, world-conquering mutant (at least, back from when the world was mostly centered around the cradle of civilization) and a totally bad dude who has, though magic mutant means, come back to life after being buried, in stasis, under ground for thousands of years. Now he's gathering together a set of lieutenants (who are dubbed his Horsemen), and wants to destroy the human world to remake it into the civilization he always wanted (read: techno-inspired ancient Egypt).

Of course, our heroes, lead by Charles Xavier, have to stop him, once they figure out all his plans. This includes putting together the First Class most people know about, including Cyclops and Jean Gray... It's a lot to take in. The movie does a good job, though, of balancing most characters and giving just about everyone a few good scenes so they can shine without throwing too many people in and ignoring them for whole spurts of time.

Well, except for Wolverine, who has a long cameo in this flick (but then he has a short cameo in the fourth-first flick, so Wolvie cameoing isn't such a big deal).

Most reviewers seem to focus on Apocalypse, saying he's not much of a villain and that it's a pity to put a great character actor like Oscar Issacs in the role and then cover him up with makeup and sadlle him with a one-note character. And maybe they're right -- Apocalypse isn't exactly a charismatic leader. Hell, he's always been big on power, short on character, from all the media I've seen of him. Admittedly that isn't a lot (I read half the Age of Apocalypse run and played a couple of X-Men games that featured him). He's certainly a force, and one not to be fucked with, but an actual strong villain, one who has character to go with his power... not really.

Is that a big deal, though? It's never left to doubt that letting Apocalypse have his way would be a bad thing. Sure, we don't bond with him in the movie, hoping he might win, but we also understand how bad of a dude he is, how much he should be destroyed. Apocalypse must go, and the movie does a damn fine job emphasizing that point.

So no, I don't agree with the reviews. Without getting into details about the full plot (since this is still a brand new movie and I'd hate to spoil shit for people), I will simply say that the movie balances the personal moments with the action set-pieces very well, and it does a commendable job of putting it all together without it feeling either too rushed or too long (something, in my opinion, the recent Batman v. Superman managed to fail at -- it was both too rush and too long at the same time, a feat of movie-making failure, to be sure). The best way to put it is that, as the third part of a trilogy of X-Men films (First Class, Days of Future Past, Apocalypse -- X-Men Through the Ages), this is a movie fans will appreciate. If you liked the previous flicks, you won't be disappointed.

In a way, that's just about all fans of this series need to know. The last time a "trilogy" was closing out, it did so with X-Men: The Last Stand, and that was a cinematic travesty that got everything about this series of films wrong.

Now, let's talk about the 3D effects for a second. I caught this film on a 3D screen, and however the film was originally plotted out -- if they thought about using 3D when they filmed it or not -- it did not put the 3D effects to good use. Honestly, the film was kinda muddy in places, blurry in others, all because I don't think the film could keep the effects up with the needs of 3D. Once special effects kicked in and everything started whipping around, the movie just got hard to follow in 3D -- the effects couldn't stand up to the onslaught.

I'm sure there are movies for which 3D is a necessity (everyone tells me Gravity and Avatar were both most-watch films in 3D -- I saw neither that way) but X-Men: Apocalypse is not one of those movies. If you have a choice in the mode you view it, go for a standard presentation. It'll look much, much better I'm sure.

Oh, and in case anyone was wondering, X-Men: Apocalypse pretty conclusively shows that X-Men Origins: Wolverine is no longer in continuity. So whether you end up liking this new flick or not, at least we can all agree that it's a good flick for that reason alone.