Wolverine is the most popular character in the X-MenLaunched in 1963 and written by Stan Lee and Jack Kirby, the X-Men featured heroes distinctly different from those featured in the pages of DC Comics. Mutants who didn't ask for their powers (and very often didn't want them), these heroes, who constantly fought against humans who didn't want "muties" around, served as metaphors for oppression and racism. Their powerful stories would form this group into one of the most recognizable superhero teams in comics (and a successful series of movies as well). movie franchise. Hell, I think he's the most popular character period (although I do have friends that hate him, so he's not everyone's favorite), which explains why he's a constant presence in the comics, cartoons, and movies. He was also the first to get his own spin-off movie, the absolutely terrible X-Men Origins: Wolverine. 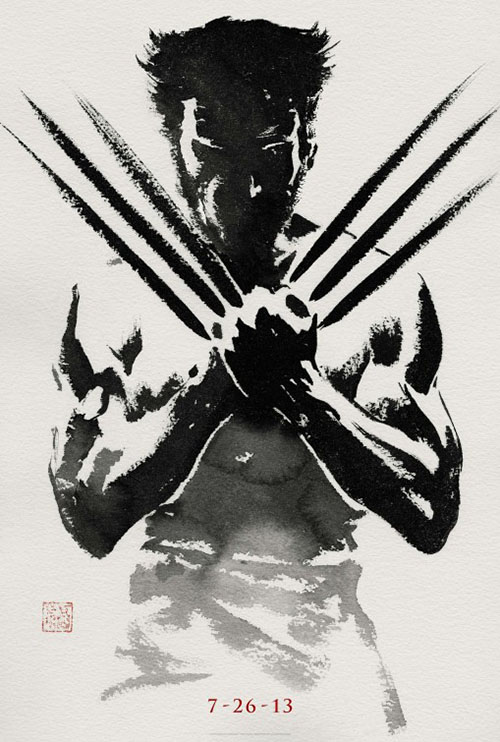 Despite how wretched that movie was, people were still clamoring for further solo adventures of Mr. Claws (still played by Hugh Jackman). Thus it was only a matter of time before 21st Century Fox greenlit another Wolvie movie. Don't think of this as a direct sequel, though -- while it may be the second Wolverine movie this film has little connection to the original film to bear the character's name. The X-Men films were doing shared continuity before even the Marvel Cinematic UniverseWhen it first began in 2008 with a little film called Iron Man no one suspected the empire that would follow. Superhero movies in the past, especially those not featuring either Batman or Superman, were usually terrible. And yet, Iron Man would lead to a long series of successful films, launching the most successful cinema brand in history: the Marvel Cinematic Universe. got on board with it, and The Wolverine is really more of a sequel to X-Men: The Last Stand, another terrible movie in the series. Now, I won't go so far as to say this second Wolvie adventure redeems that threequel, but it does at least make what happened in that movie more tolerable in retrospect.

In The Wolverine, our titular character is hiding out in the backwoods of Canada, living like a mountain man, removed from society. He's pulled back to the real world, though, when a young woman, Yukio (Rita Fukushima) -- a mutant with the ability to see the the future, more specifically anyone's death -- comes calling. She works for Mr. Yashida (Hiroyuki Sanada), a man Wolverine saved many years ago during the bombing of Nagasaki. Since then, Yashida has owed Logan a debt. Once Logan is dragged to Japan, Yashida make his offer (on his death bed): his people have found a way to give Logan the one thing he craves, a good death. Instead of living forever, Wolverine can finally die. Tempting as it is, Logan declines, largely because Yashida makes it sound like he wants to steal Wolvie's healing ability, and Wolverine doesn't want anyone to suffer that "curse". So Yashida dies and Wolverine makes plans to head back to North America.

That is, except for the fact that the Yakuza attack Yashida's funeral and try to kidnap Yashida's granddaughter, Mariko (Tao Okamoto). During the attack Logan is injured and, surprise, he doesn't heal. Somehow, despite his protestations, Yashida did find a way to give Logan the ability to die... and now he doesn't want it. Logan has to protect Mariko, find a cure for his sudden new ailment, and find out what is going on deep within the Yashida family.

Based in part on the Claremont run on the Wolverine comics, this movie follows the same basic idea from that run, namely sending Wolverine to Japan to function as a kind of mutant samurai/ronin. Now, I haven't read those comics so I don't know how many of the actual ideas from them were used for this movie (or if it was just "let's send Wolvie to Japan like in the comics"), but I also don't think that really matters. The X-Men films diverged from comic continuity the second the first film started up on screen, so whether the films are like the comics or not, their stories are very different. Whether this movie followed the exact beats of the comics probably only mattered to true, die-hard Wolverine fans, and even they probably were expecting the films to take a certain amount of latitude. 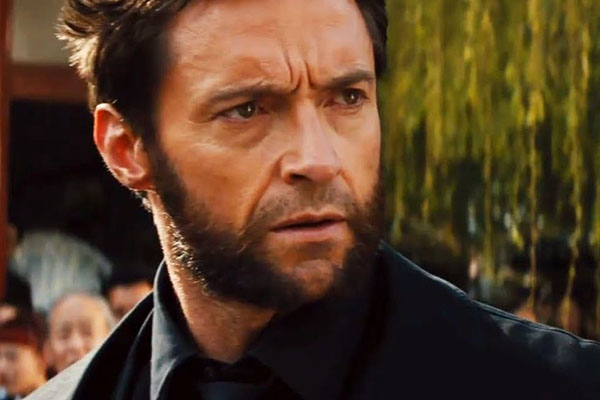 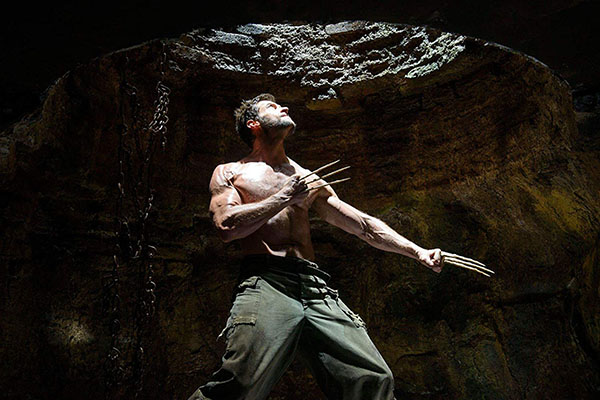 Whatever story the comics might have told, the movie focuses on a tale of familial honor and corporate greed. Yashida dies, leaving his fortune, and company, in the hands of Mariko, and everyone wants a piece of her, from her father to the Yakuza, and a couple of other entities working behind the scenes. Mariko, really, is tossed back and forth between whatever everyone else wants and, due to her own sense of honor, struggles to find who she really is in the process. Meanwhile, Logan is a man without honor, having killed the woman he loved in X-Men 3. His struggle is even more internal -- while people want his abilities, the person he's really fighting is himself, fighting to his honor, his right to be human again and not just a husk living on a mountain. These two characters use each other to rebuild themselves and figure out what they really want.

It's an interesting tale to tell, especially considering the stories we had in the previous four movies (five, if you count First Class which came out two years before this one). Those films all went for big, bombastic superheroics with potentially world-changing calamities that only the best mutants can stop. The Wolverine keeps it more personal, makes the stakes about people, not apocalypses, which allows this movie to feel fresh and original. Sure, there's still superheroics and bombastic action (eventually), but the stakes are much more relatable and (despite mutants and advanced technology) more grounded.

A lot of the credit deservedly goes to Jackman as the actor managed to reinvent Logan into a soulful, broken man. Sure, his performance as Wolverine has been great in the previous movies -- he's about the only good thing in both Origins and The Last Stand -- but this time Jackman gets to see beyond the caged animal within to find an even more real person to play. The Wolverine we know is barely seen for much of the movie and Jackman gets to sink his teeth into a very different, and much more interesting, version of the character.

While Mariko is the other major character of this piece, I honestly don't feel like she's as much of a presence in the movie as she should have been. her character is very passive, bound by honor and duty and only really finding herself near the end of the movie. For the rest of it she's more of a blank, a stand-offish character without the emotional depth of Logan. I don't want to blame Okamoto for this as I think this was the way the character was written and directed, but certainly we needed more from Mariko to really care about her to the same degree we care about Logan. 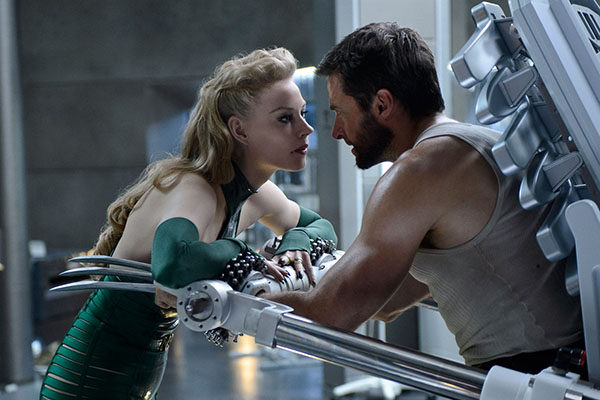 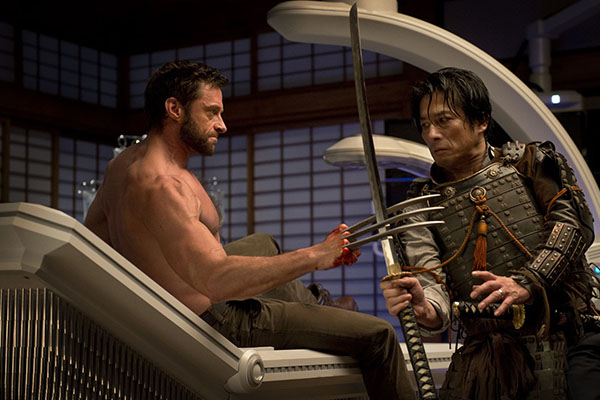 It's Yukio, honestly, that we end up bonding with more. As played by Fukushima, Yukio has fire and charisma. She's a feisty gal, one that can handle herself as well in a verbal spat with Logan as she can with a sword in combat. But she also gets an emotional range, having her own soulful moments as she deal with death as well as adoptive-family politics (as she's attached to the Yashida family). Fukushima makes Yukio into a fantastic character, a real standout from this series, and its just sad that her version of the character didn't go onto appear in later films.

Much of The Wolverine is great, an interesting, dramatic adventure that feels more like a Western (the lone gunman coming into a new town) than a straight superhero movie. That style of film was obviously intended -- the director said as much -- and obviously there's a cinematic history in Japan and America likening Samurai films to Westerns. Having that spun around again within the X-Men films works so well here, and it helps the film feel so fresh and different from the other movies in the series to come before.

That said, the movie is not without its flaws. For starters, the last act pretty well loses the great tone of the rest of the movie. It trades in the Western slow-burn for bombastic action and ends feeling like another X-Men film. Plus, the villains in the movie all lack depth, thus draining much of power from the last act -- sure, there's a mystery about who the bad guy really is, but even after they're revealed we just don't get much from it. They draw attention away from the stars -- Wolverine and Yukio -- and muddy the movie.

Still, a weaker last act doesn't ruin all the good this movie is able to perform. It somehow almost redeems plot points from the third film in the series and, in the process, manages to show that Wolverine really did deserve his own solo film. Who know it was possible?

So by the end of this movie, Logan has lost his adamantium claws. His claws get chopped off (by a heated, adamantium blade), and his bone claws grow back. By the next film, the future section of Days of Future Past, his claws are back though. How? I mean, it's not beyond the bounds of possibility that he could regain them, maybe finding someone that can remake them, but is that likely? No, and certainly not without explanation, which isn't provided. 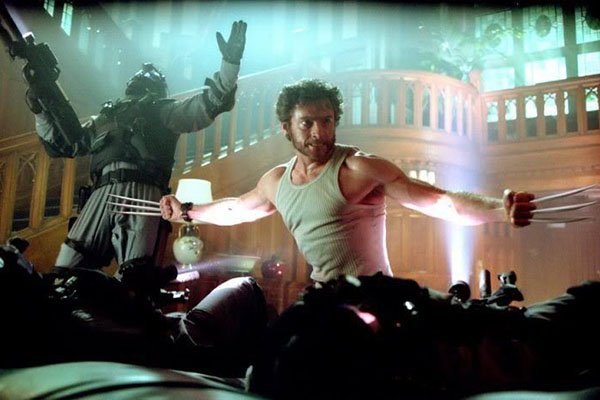 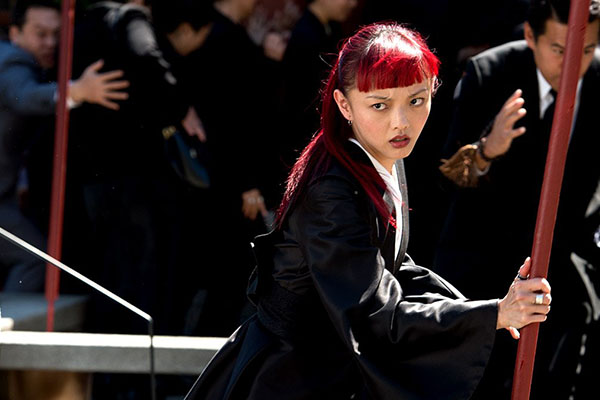 Meanwhile, Yukio is introduced in this movie, a precog mutant who can see people's deaths (and is also great with a katana. She joins up with Logan by the end of the film to aid him in his future adventures. By the next film, though, Yukio is gone. In fact, the next time we see her, she's a teenager in Deadpool 2 (and played by a different actress). What happened to Yukio? Why wasn't she with Logan in his future adventures? And then why is she younger in a later film? I mean, sure, the Deadpool franchise can do what it likes. It's just weird that she got this treatment.

And, of course, there's the big on that everyone complains about. At the end of X-Men: The Last Stand it's implied that Professor X (who died earlier in the movie) had mentally taken over the body of a brain-dead man. But then here, in the stinger for this film, he shows up again, once more played by Patrick Stewart. It's one thing to have him take over a body and quite a different thing to think he can have that level of extensive plastic surgery to make him look just like he did before. Or that he was vain enough to want that, for a mater of fact. Sure, they want Patrick Stewart back in his iconic role, but it's a little silly when you think about it.

Not that this also marks the last movie to officially take place in the original film timeline. After this film came out, we then had Days of Future Past, which rebooted the continuity and changed everything. And so we have to bid adieu to the original timeline. You lasted long enough but, after X-Men Origins, simply had to go.