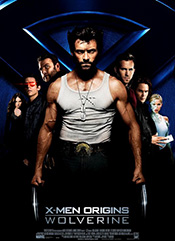 In the three X-Men movies, Wolverine (Hugh Jackman) is a character shrouded in mystery. Due to his amnesia, he doesn't remember much of anything before the last 10, 20 years. This gives his character an emotional thrust, the desire to find out what happened in his past and see just who he was before he lost his memory.

In X-Men Origins: Wolverine, we find out just what his history is, and it's not anything to live up to the potential of the premise.

The movie starts in the early 1800s when James Logan (Wolvie as a boy), is growing up. He has a half-brother, Victor Creed (who will become Sabertooth), and a loving mother and father. Sadly, his father is killed by his mother's past lover (maybe ex-husband, although little time is spent on establishing this), and then James goes ballistic, grows claws from his hands, and attacks the murderer.

This act sends the two boys on the run, relying on each other. They become soldiers, fighting in war after war: American Civil War, the Great War, World War II, Korea, and Vietnam. It's after an incident in Vietnam (where Sabertooth attacks a superior officer and Wolvie gets caught in the middle of it) that our soldiers-of-fortune are recruited by William Stryker (the same character from the second movie). He's putting together a team of mutants to do covert-ops things, things normal people are unable to do.

However, as the missions grow more and more morally grey (and black), Wolverine quits the team to go live the quiet life up in the Canadian Rockies (always the first place I go when I've just quit a covert mutant military team and want some time to myself). There he meets the love of his life, Silverfox, and has six good years working as a lumberjack.

But when Silverfox is killed, Wolverine jumps back into the military fold, has an indestructible metal grafted onto his bones, and goes on a quest for revenge.

As the synopsis above should illustrate, X-Men Origins: Wolverine has a plot so stuffed with ideas as to verge on too much. It is, in fact, too much for it's hour and a half run-time. There's easily enough plot in this one movie for two or three films set during different chapters of Logan's life, but the filmmakers (and more likely the studio bean-counters) decided that audiences didn't want two or three deep, though provoking action flicks, and instead boiled down the entire 150+ years of Logan's life down into 90 fairly pointless minutes of celluloid.

Beyond the fact that the movie won't sit still log enough to explore any plot thread to a natural conclusion (instead racing around faster than an ADHD-affected 5-year-old hopped up on energy drinks), the movie just doesn't serve any good purpose. We already knew Wolverine lost his memory due to the Weapon-X Project (which is what the metal-grafting treatment is called). We already knew Wolvie volunteered for it. We already knew that William Stryker was a bad guy and was behind all of it. Did we really need a flick to explore all these ideas over again. Wolverine has been around for a while (in comics as well as in past history for the character), and it just doesn't make any sense that they decide to focus on what is, arguably, the least interesting part of his life (since we already knew all this information from the last three movies).

Beyond that, there's just no tension in the movie. Besides the fact that Wolverine is indestructible, this is a prequel, and Wolverine plays a pretty big role in the other three movies. We aren't worried about him dying, nor for that matter are we at all interested in if the villains survive or not. What few characters the movie decided to focus on are in later movies (Stryker and Sabertooth are good examples) so obviously they won't die, and the characters that do end up dying we only spend two or three minutes with, each, so there's no emotional connection -- we just end up hopping from one set-piece to another, watching the pretty mutant powers.

This in-and-of itself wouldn't be so bad (although it certainly wouldn't help this movie soar to the heights of the first two), but the special effects verge on laughable for much of the movie. The biggest flaw are Wolverine's claws, done with CGI here (bad CGI at that), while in the previous movies I'm sure much of the time they were prosthetics. However they were rendered in the past, they're done very badly here (looking exceptionally fake), which is inexcusable. They've had a decade (with three movies there-in) to perfect these claws. They should be looking better with each passing flick, not worse.

There are a couple of stand-out special effects (although they are the exceptions, not the rule). For one, Gambit's powers are rendered in beautiful detail. The purple sparklies (for lack of a better term) actually look as realistic as mutant power sparklies can look -- this is a character that has a believable mutant power. Sadly, Gambit is in the movie for all of five seconds, and then it's on to the next pointless character spot.

Similarly, there's a teleporting character (who's never actually named in the movie -- or at least, not in a way so that I was able to remember it). His ability to transport has a damn cool special effect, with his body melting away to bones, which then vanish and reform elsewhere. This whole effect is different from Nightcrawler (the other teleporter we've seen in the series), and helps to make him seem like something other than a poor-man's Nightcrawler. Sadly, again, he's barely in the movie, so as cool as his power is, there's not time to get attached to his character or enjoy his power.

As much as I'm repeating a point, there's just so much stuffed into this movie there's little time for anything to matter. There's so many mutants in this flick you have to wonder why they were all included (well, besides fan-service and selling toys... no, wait, that's probably the exact reason). Aside from the aforementioned characters, we also have Agent Zero, Deadpool, the Blob, Cyclops, Emma Frost, and about a dozen others for blink-and-you-miss-it cameos. Some of them serve the plot, but most are there just to be there, have a scene, and then fade out. It's sloppy writing, as they just used characters (who didn't really fit the scenes they were in) because they had a mutant power designed to beat one specific problem. Instead, they should have kept the number of characters small and found ways to use their unique gifts in interesting ways.

There's little point in even going over the performances, as barely anyone has anything to do on-screen. Hugh Jackman is the star of the show, giving the only meaty performance in the movie, although I suspect that, after 10 years, he could read the phonebook as Wolverine and it would seem like a meaty performance (and probably worth paying to see). Aside from him, there's very little acting in the movie: Sabertooth growls a lot, Stryker is slimy, the Blob is dumb... every performance is as one note as this.

The only other stand-out performance is Deadpool (Ryan Reynolds), who is as smarmy and loud-mouthed as he should be. To be fair, though, this is a character Reynolds could play in his sleep (mostly because it's the kind of character he always plays). He was fun to watch, and had a good couple of moments... but, sadly, he's gone by the 15 minute mark of the movie and barely seen again.

So yeah, the movie just isn't at all good. It has moments where it gels, where the characters on screen are actually watchable, and it seems like the filmmakers had a movie they wanted to make out of all this mess, if only they'd been able to focus (or wrest control away from the studio) long enough to do it. Sadly, as with everything in this movie, these moments of brilliance are few and far between. This movie does little for the mythos of the series. There's no reason to watch it, as everything it covers has already been covered in the series (and, arguably, with more tension). Just don't bother watching this movie.

Interestingly, though, it's still better than X-Men 3.