Let's be honest, up at the front of this article: Marvel Television has been a mess. It's not just the fact that NetflixOriginally started as a disc-by-mail service, Netflix has grown to be one of the largest media companies in the world (and one of the most valued internet companies as well). With a constant slate of new internet streaming-based programming that updates all the time, Netflix has redefined what it means to watch TV and films (as well as how to do it). canceled a bunch of the Marvel shows just a few short years after building them all up, crowing about how there would be a this grand Defenders anthology that would tie-together as neatly as the first Avengers (that Defenders mini-series, of course, being a total bomb). Other projects has slowly sputtered in the ratings (like Agents of SHIELD, which has gotten better over the years), and still other projects have sputtered (like Agent Carter, which I loved) and/or completely failed (such as Inhumans). 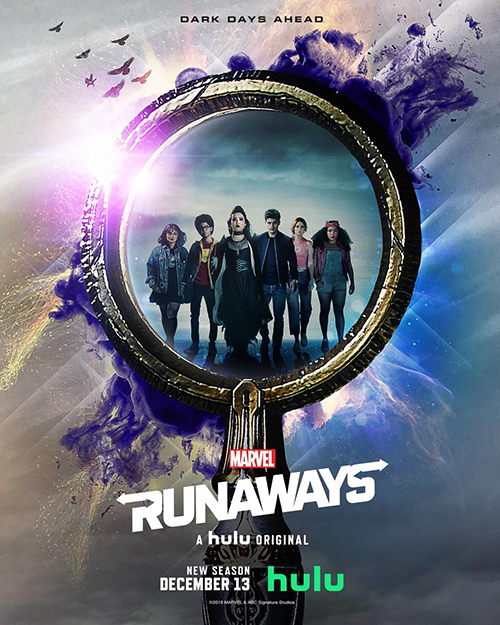 But, of course, the reason that the Marvel Television projects have failed to catch on is that, unlike the cinema where the Marvel Cinematic UniverseWhen it first began in 2008 with a little film called Iron Man no one suspected the empire that would follow. Superhero movies in the past, especially those not featuring either Batman or Superman, were usually terrible. And yet, Iron Man would lead to a long series of successful films, launching the most successful cinema brand in history: the Marvel Cinematic Universe. dominates, building a shared universe that powers one movie to the next, none of the television shows have felt at all connected to the MCU. Sure, occasionally someone will make a reference to the events that took place in New York, or that they once saw Iron Man and got his autograph, but you'll never see Captain America, Hulk, or even low-rent Avenger Hawkeye slumming it on Netflix of Hulu or ABC studios. The closest we got was a couple of short cameos from Samuel L. Jackson in the first season of SHIELD, and then all these shows were discarded. It sucked all the life and energy out of these shows.

You would think that would be freeing, that not having to worry about the dictates of the greater universe would allow these shows to find their own energy and become behemoths in their own right. but, in most cases, these shows have felt like they've been closing up shop for years, rushing through storylines while the budget for effects has dwindled. That feeling of wrapping up shop, of trying to just get through the show so everyone involved can move on to other projects, permeates every episode of this third and last season of Runaways and it's a damn shame.

I will admit I've been hard on this show. First season took a long time to get going and then, even when it felt like the kids at the center of the show were finally coming together, would match the actions of their comic book page brethren and, you know, run away, the show still managed to keep them mired in their old lives, to spend way too much time on stuff that didn't matter. By the end of the first season the show had drastically diverged from the source material, in some ways changing characters so much it'd be impossible to get them anywhere near the characters we knew from the books. The show, by the middle of its second season, had so little to do with the comics it was based on that you had to wonder why they even bothered calling it Runaways.

I'm not saying that movies and shows shouldn't diverge from their source material. The media are different and what works on a comic book page won't normally work on the screen (Watchmen slavishly used the comic book as storyboards and lost it's cinematic magic). But there's a difference between interpreting the source material in new ways and changing things completely to just do whatever you want. You wouldn't change Superman's origin story (not if you're keeping him as Kal-El/Clark Kent) because if he doesn't come from Krypton, doesn't land in Smallville, then who is he? If Batman doesn't lose his parents in an alley, who does he become? These are one-off tales for an "Elseworld", not something to explore in a long-form series that supposed to adapt characters people loved in the pulp pages. 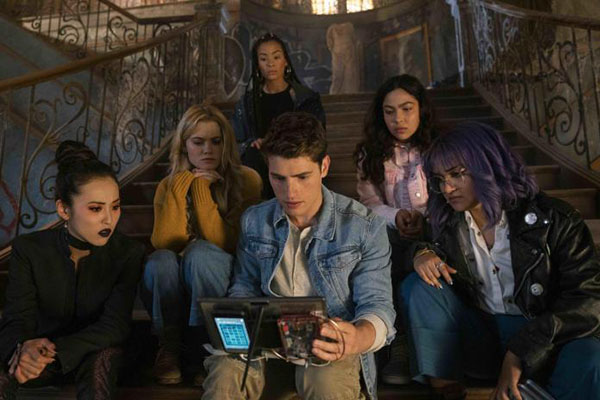 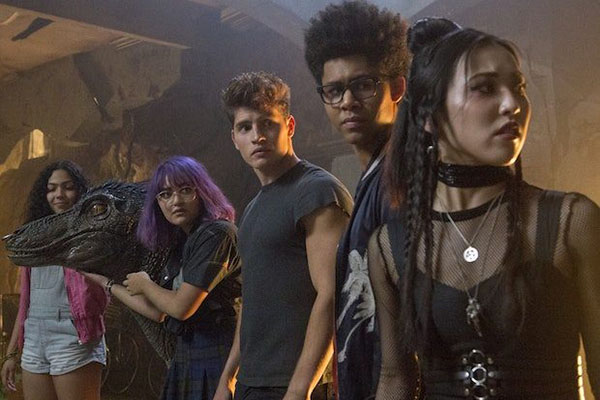 That's how we end up with a show that, now three seasons in, still doesn't really have the "Runaways" as runaways; they keep ending up around their parents, keep getting mired in their business and, half the time, one parent or another is actually living with them. It's how we end up with some characters that were villains in the show never exploring that path, and other characters that were supposed to have big arcs getting short changed and then shuffled out of the series. There are so many changes at this point that the Runaways resemble a Clark Kent who was always human and went to work in Star City as a wrestler before taking on the moniker of "The Super Man". Sure, at first glance you see a similarity, but they aren't really the same anymore.

Maybe that would be fine if the story the show decided to tell with these characters-in-name-only were any good. Simple fact is, though, that the third season of the show is absolutely abysmal. As you may recall from last season, the Runaways were dealing with the Gibborim, a race of light-based aliens who had been trapped beneath L.A. for hundreds of years. Freed at the end of last season, the Gibbs has taken over three of the adults -- Victor Stein, Stacey Yorkes, and Tina Minoru -- and were using them as hosts until they could open a portal to their home world. The runaways -- techie Alex, witch Nico, half-light alien Karolina, activist with a dinosaur Gert, mutant Molly, and builder/jock Chase, along with their alien shape-changing ally Xavin -- had to find a way to free their parents and stop the aliens before the portal they opened ripped a hole in all of reality and wiped away the Earth.

Well, the Runaways do, in fact, deal with this issue, wrapping up the Gibb plot line in the front half of the season, and it's entirely and thoroughly underwhelming. The whole "bodies taken over by aliens" storyline has been done before in other shows and movies and this season didn't add anything new or interesting to the concept. The show devoted four episodes to the story to wrap it up, and then quickly moved on as if the Gibbs weren't a threat. Everything it had been building up before, everything the show was trying to say about how big a threat these aliens were, was cast aside in a big cloud of CGI, their storyline forgotten, never to be mentioned again. Then we cut to an alternate dimension where someone Nico has sent all of the Runaways, and this ties into the back half of this short, stupid season.

From the mid-point on the Runaways have to contend with Morgan LeFay, the sorceress from Arthurian legend who is, apparently, a real person. Morgan has ties to the same dark magic Nico uses and the dark witch wants Nico's wand (and her power) so she can rule the world. This is the standard "I'm going to take over the world by destroying it and remaking it in my image" storyline we've seen from many superhero shows (as well as other works of sci-fi and fantasy) and Runaways doesn't do the storyline any better than it's been done elsewhere. If anything, it handles the story is such a slipshod fashion that it's one of the most tedious versions of the "world takeover" story I've seen in quite some time. 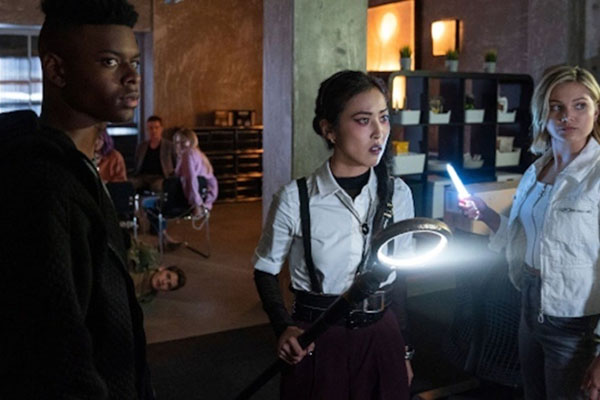 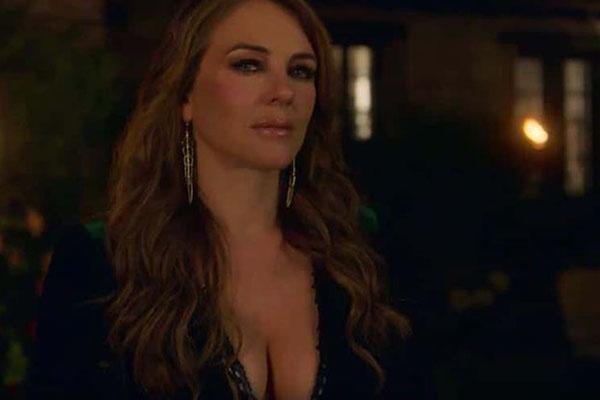 The real issue with Morgan, much like with the Gibbs before her, is that she's just not a very well defined villain. Fact of the matter is that Runaways has a villain problem; it's populated by villains -- Pride from first season leading into the Gibbs in second and third and then Morgan to clean it up -- with vague goals that don't have an impact and performances that are, by and large, rather one-note. The Gibbs were boring, stiff and uninteresting, while Morgan basically has vamping sex appeal as her only move. While I give actress Elizabeth Hurley credit for owning the sex-pot character she was given to play, obviously enjoying her scenery-chewing performance, there just wasn't enough to the character to make her interesting.

Morgan's goal is to take the power of Nico's staff so she can merge her own hell dimension and the real world, essentially killing everything on the real world when her armies come sweeping across the void. That sounds threatening when the character talks about it but we never actually see anything to make this threat feel like a real problem; she doesn't raise some of her armies through a crack to go cause damage, she doesn't blow up a few buildings or part of a suburb. Morgan talks a big game but it doesn't actually come to anything. It's the same problem with the Gibbs since they talked about how their portal could rip apart the Earth but we never saw any effects of their tech causing issues. It's mentioned, cast aside, and then never dealt with again.

Really, the only time the season finds any energy is in the last episode. At this point (spoiler) much like in the comics, Gert dies. So Chase from ten years in the future invents a time machine so he can travel back and save Gert. But, in the process, his time travel tech falls into the hands of future Alex who seems to think the rest of the Runaways have been trying to kill him so he decides to kill them all in the past. It gives us a clear villain, a goal we can understand, actual stakes, and a reason to bring all these people together. It works, it makes sense, and it all plays out with speed and efficiency over the course of a single episode. If only the rest of the season could have been this good.

Runaways season three spends nine episodes stumbling around, bouncing off lame villains while its character pointlessly argue with themselves, each other, and the adults, all while accomplishing nothing. It finally becomes a show worth watching right as it ends, canceled by Marvel and Hulu after three lackluster seasons. If they whole series could have been as good as the last episode it might have been something. Maybe, once the rights to the comics revert back fully to Marvel, they can try again and do an adaptation that not only maintains the spirit of the comics but doesn't suck.