A Purple Peck of Holiday Cheer

I've talked about this before but it does feel like the Marvel Cinematic Universe is being split between two different directions for the future of the franchise. On the one hand you have the traditional superhero films of the last three "Phases", Black Widow and Falcon and Shag-Chi, and then you have the stories focused whole-hog on the Multiverse, Loki and What If? and the currently showing Spider-man: No Way Home. Each side has its own merits at times but they also feel like two very different paths and they don't always blend so well together. 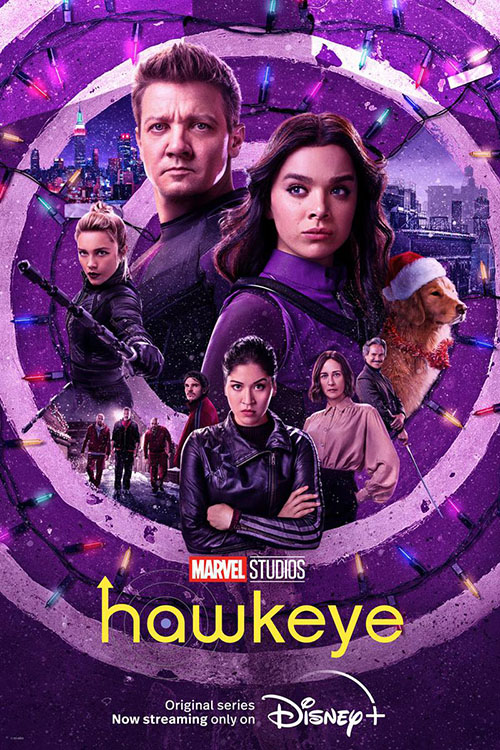 When people talk about how Hawkeye: Season 1 seems "too basic" or "too safe", I think this is the problem. People see all the weird crap coming out of the MCU, a trend started by WandaVision and they expect something that's going to be as wild and interesting for every one of the films. When the movies or shows fail to deliver on that strangeness its considered a mark against them. "Marvel can create this truly amazing, ballsy story. Why are we getting a street-level story with the least-interesting Avenger?" That might not be fair but it is a problem of Marvel's own making.

It doesn't help that some of those stories, Black Widow and The Falcon and the Winter Soldier, weren't exactly interesting tales by any measure. Each was hobbled by weird decisions that didn't have anything to do with their connections to the Multiverse. But fans can look at this and just wish Marvel would embrace the oddities and stop doing such "small" stories (even if Black Widow wasn't really a small film). That might weigh against Hawkeye in some viewers' eyes, but if it does it robs them of the ability to enjoy one of Marvel's better television efforts. Most of all, Hawkeye's first season gives us Marvel's proper answer to what Netflix was doing with their superheroes years ago: it gives us a proper, street-level superhero story set properly in the MCU, and it's so good.

The series opens with hero Hawkeye, Clint Barton (Jeremy Renner), out with his kids in New York City (attending an amazing performance of "Rogers: The Musical") when he gets wrapped up in an adventure he really didn't want to have to deal with. Inspired by Hawkeye and how he's saved the world time and again despite being the most mortal of all the heroes, young Kate Bishop (Hailee Steinfeld), took up her own bow so she could fight crime. Specifically, when at a holiday party she finds an illegal auction going on down in the basement of the building with various Avengers items up for sale. One item in particular, the suit worn by Ronin (who was also Clint Barton during a very dark time) comes up. When criminal break into the auction and try to steal everything there, Kate grabs the suit and puts it on before kicking the asses of all the bad guys. This puts a target on her back and everyone thinks she's now the Ronin.

This is an issue for Kate as Ronin killed a lot of bad guys back during "the blip", and many of those people want revenge. One such criminal is Maya Lopez / Echo (Alaqua Cox), daughter of one such mob boss that Ronin killed. ow the leader of the Tracksuit Mafia, Maya wants nothing more than to see Ronin dead, once she figure out who the cloaked figure really is. Meanwhile, someone else behind the scenes if pulling strings, sending a trained assassin, the Black Widow Yelena Balova, after Clint. Hawkeye, and his new (and very eager) partner, will have their hands full digging themselves out of this mess. 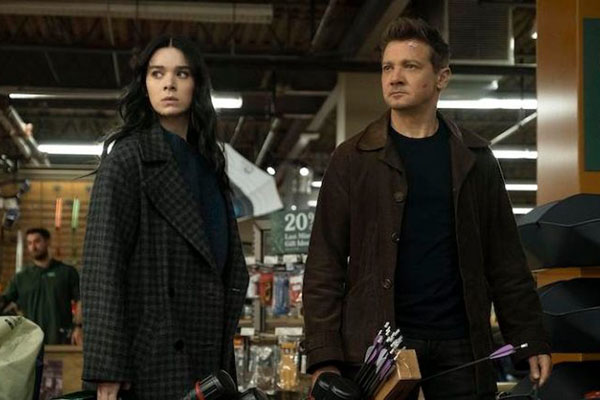 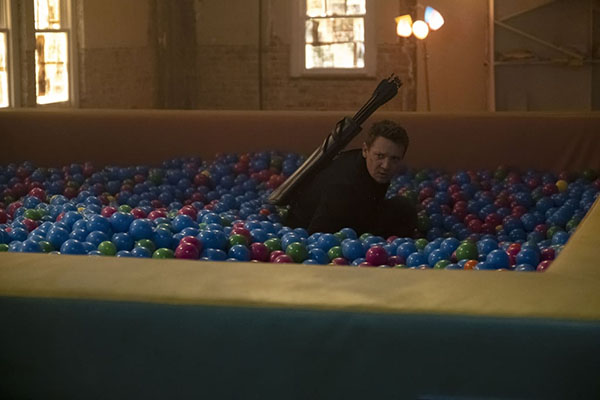 The biggest thing that seemingly weighed against a Hawkeye show was the fact that Jeremy Renner is, frankly, one of the most bland actors in existence. His performance as Hawkeye has rarely risen above "well, he's a character that exists", and certainly no one (outside of Kate Bishop, a fictional character) would have even said, "Hey, Hawkeye is in this one!" with any kind of glee. To make this series work Renner would have to step up his game to make his character someone people wanted to actually watch.

Surprisingly, and to the benefit of the show, Renner absolutely nails it. Given the time to actually expand his character and show off all facets of Clint, from family man to friend of Natasha to partner and father figure for Kate, Renner is able to show a whole range to his acting. He manages to nail the darker moments of being a superhero, the soulful moments as he feels guilt over Natasha dying, and the lighter moments dealing with Kate. This series lets Renner do so much that he actually does the impossible: he makes Hawkeye interesting.

It helps that Steinfeld is absolutely delightful as Kate Bishop. She doesn't get to have as much of a range as Clint, but then her personal history in the MCU is so much shorter. What she does bring, though, is zip and glee, adding an infectious charm to the show that makes it so much fun to watch. Where Clint is an old dog, going through his heroing despite the fact that he wants to just get back home to his kids, Kate is like a happy puppy, delighted to be able to pick up a bow and be a heroine. It's everything she wanted, and the actress conveys it all. Clint and Kate together are great.

Construction of the story itself is half-based on the Fraction/Aja run of he character and half tied to the MCU. The Hawkeye of this show isn't the one that could be in the Fraction/Aja run as the character is in a completely different place with his personal history and his own head-space. The series does what it can to take elements of the comics -- the Tracksuit Mafia, appearances by Pizza Dog, the interactions between Clint and Kate that were such a highlight of the run -- and then uses it to tell a very MCU story that works. Best of all, because it deals with a character who is so closely tied to the first Black Widow, Natasha, the movie is able to redeem her film, Black Widow through the lens of Clint and her sister, Yelena. That works so well. 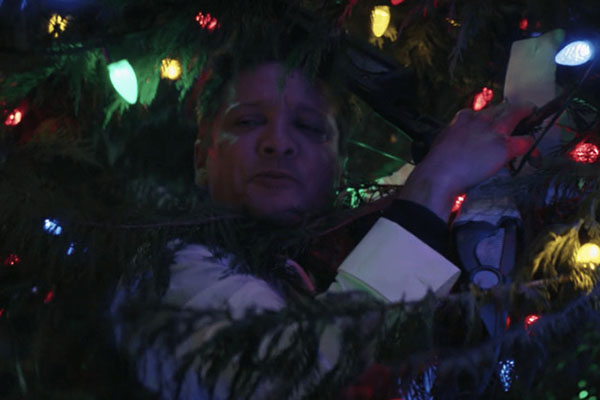 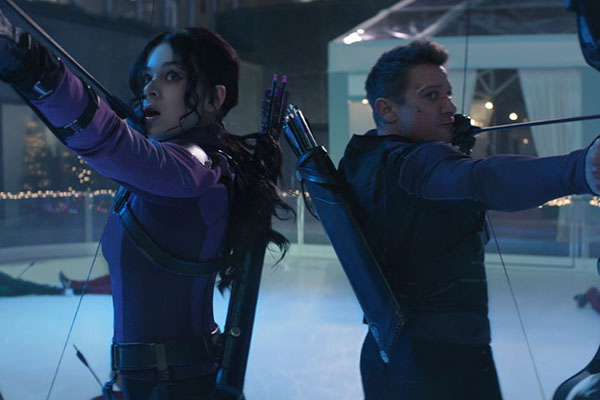 And, yes, this is a show about a couple of very mortal characters trying to do the heroic thing against other very mortal foes. In that regard if very much reminded me of the Netflix shows which were all about the street-level action (and that's before we get to a cameo of a character from those sows, played by the same actor). Unlike those shows, though, Hawkeye never overstays its welcome. Clocking in at a brief but fun six episodes, this season knows how to tell its story without getting bogged down in a long episode order. It gets in, sets up its story, intros its characters, has some fun, and wraps up in a breezy pace. That what we need from this kind of show and Hawkeye does it right.

Most importantly it gives us Kate, a character that we want to see live on in movies (and, dare we ask, a second season of the show?) as the MCU grinds on. Whatever is next from Clint and Kate, this show illustrates just how good these two characters (and actors) are playing off each other. Clearly neither is leaving the MCU any time soon, and that's great. For once I actually look forward to what Hawkeye (and his partner Hawkeye) will do next, and that's a really weird feeling indeed.