I Critque This Critique

Considering the kinds of movies I review on this site, it should come as no surprise that I really enjoy horror movies. Generally, if a film is billed as "horror" (and not just torture porn, one of the few genres of horror I don't enjoy), I'll add it to my watch list. That's the beauty, and danger, of NetflixOriginally started as a disc-by-mail service, Netflix has grown to be one of the largest media companies in the world (and one of the most valued internet companies as well). With a constant slate of new internet streaming-based programming that updates all the time, Netflix has redefined what it means to watch TV and films (as well as how to do it). because horror is cheap to make and Netflix will buy just about anything, so there are all kinds of crappy horror films on the service, and I tend to watch them all. 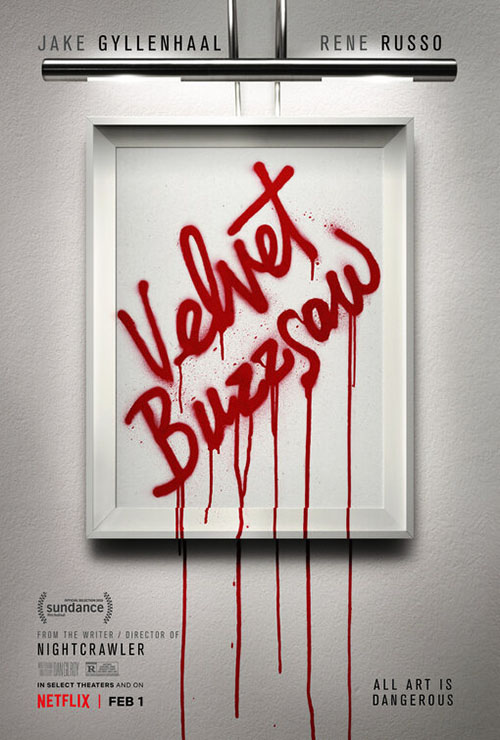 One that caught my eye recently was a film that, for many, slid under the radar: Velvet Buzzsaw. The film didn't get a lot of buzz (no pun intended) partially because it went straight to Netflix but also because the promos for the film made it look really strange. Pitched as a kind of biting critique of the art world, Velvet Buzzsaw really only has a passing interest in that topic, instead using it as a background for a more conventional (and, honestly, less interesting) horror movie. It's hard to say what the thought process was behind this movie, but whatever they creator, Dan Gilroy, was going for, it doesn't doesn't seem to be in the final product. Well, unless he wanted to make a middling, convention horror movie, which in that case he succeeded.

In Velvet Buzzsaw we're introduced to Morf Vandewalt (Jake Gyllenhaal), an art critic priased by all who know him for his insightful reviews and spot-on eye. Morf is friends (and, eventually, lovers) with Josephina (Zawe Ashton) who herself works for Rhodora Haze (Rene Russon), a powerful art dealer. When Josephina stumbles upon an artist, dead in his apartment, with a stash of striking, haunting works, she takes the various pieces and uses Rhodora's connections, and Morf critiques, to sell these works to the art world. However, the artist, Dease, apparently left specific instructions to have all his works burned and since that didn't happen, his spirit is now very angry. And thus begins a spree of deaths as Dease's spirit takes out everyone profiting from his works, one by one.

The movie starts in the art world and, for most of the first act, is all about that scene: art shows, art critiques, and the greed that underlines it all. This whole first act is interesting, especially if you have any passing familiarity with the art world, and if the film had somehow followed this strand of story it could have been interesting. Certainly a battle for control of the Dease archive that eventually leads to the various artists back-stabbing (literally) each other could have been quite a compelling thriller. These characters are all interesting in their own ways, and it's clear they're all fake, nasty people, so seeing them off each other in over-the-top, gory fashion could have had it charms. I mean, if you wanted to make a horror movie out of this setting, there are worse ways you could do it.

Velvet Buzzsaw manages to find a worse way, shunting aside most of the really interesting, biting commentary about the art scene to instead focus on Dease, his weird paintings, and his vengeful spirit. I've never been a huge fan of ghost stories -- I'll watch them, but I don't tend to find them intriguing -- and this movie fully commits to being a ghost story from the start of the second act on. Once someone dies, the movie just goes down the same path of any other slasher flick. If you took Death from Final Destination and made it into a vengeful painter you'd have the ghost of Dease in this film. It's interesting for a short pepriod of time, and then you just get bored watching these people stumble into stupid situations, dying in elaborate ways that aren't scary, just time consuming. 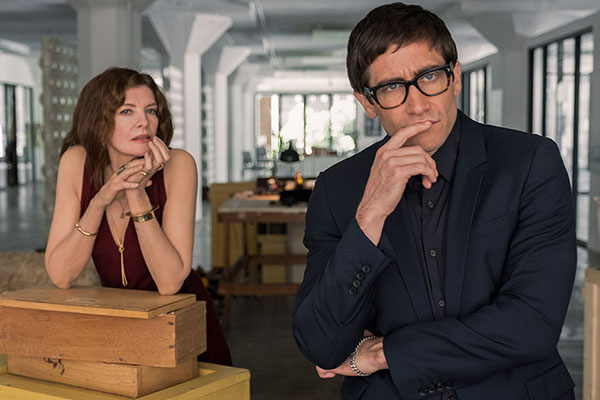 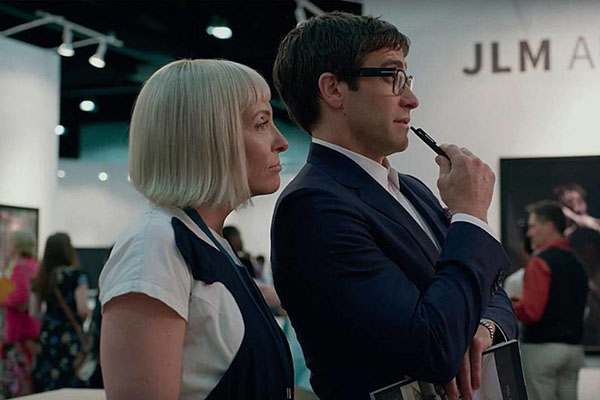 Part of the problem, of course, is the fact that the movie just isn't scary. Usually ghost stories thrive on claustrophobic settings -- a family moves in to a place and can't leave for whatever reason, so they have to keep subjecting themselves to the terror, letting the horrors build over time. Velvet Buzzsaw doesn't have that same kind of setting, though, letting is characters roam free. That means the ghostly killer has to come to them, making their kills less about tight quarters and horror around every turn and more a Rube Goldberg setup of "how can we cause a death to happen here". The build up is different, and in the case of Velvet Buzzsaw the tension never arrives.

As I've noted previously on this site (more times than I can count at this point), horror is difficult. Building tension properly takes a careful hand and a lot of fine-tuning, and it's very easy to lose tension quickly due to rushing things or being repetative. That's part of what eventually doomed the Final Destination series -- once you've seen a few deaths in the series you start viewing every room as a puzzle box of death, usually the same deaths, over and over -- and if you've seen a few of those, Velvet Buzzsaw doesn't really have much new to offer.

That's not to say there aren't a few good moments in the movie. One death is particularly gory (in the best possible way) and another one is at least creepy, as if it came out of an episode of the Twilight Zone. But even when the kills are good, there's very little tension to the sequences. Seeing a guy get killed by an art-installation robot is funny, not scary, and when a movie is going for scares (and not laughs) that's the wrong reaction to have.

Really, the biggest knock against the movie is that it ditches the fanatastic first act to tell such a conventional, tedious story. Jake Gyllenhaal is in his character of Morf, and if the movie would have just followed him as he slowly went off the deep end, killing everyone around him to he could have sole control of a body of work he's clearly fallen in love with, that would have made for a very interesting story. Keeping the focus on Morf and his weird, eccentric ways would have at least kept the movie grounded in the art world. Better, it could have made the critique of artists and their scene much more biting. The movie we got is neither. 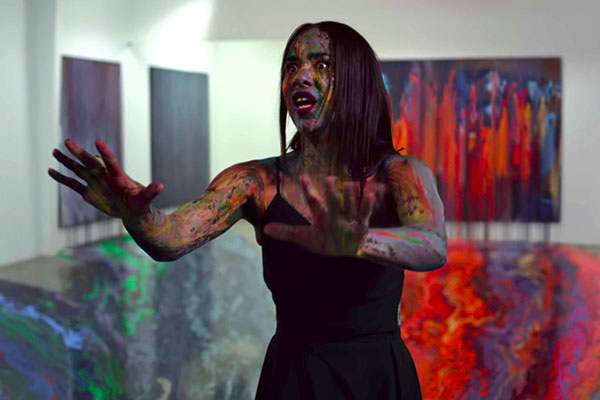 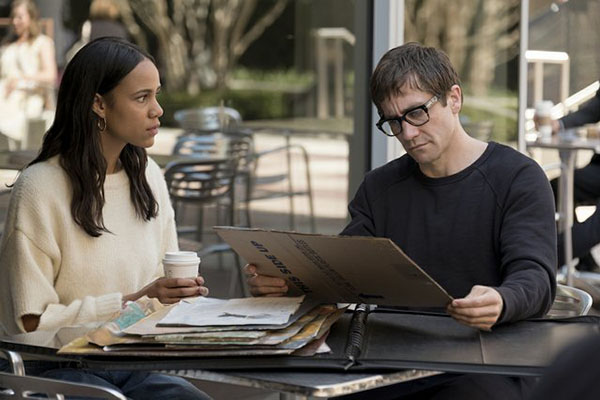 I wanted to like Velvet Buzzsaw. It starts off so strongly, making a great thesis statement about the fakeness of the art world, but then it just peters out. If the film could have settled down, told one story instead of shifting gears part way and telling a completely different tale, it could have been a success. Velvet Buzzsaw, though, just wastes a whole lot of potential for very little gain.