The Devil Came Back from Florida

When NetflixOriginally started as a disc-by-mail service, Netflix has grown to be one of the largest media companies in the world (and one of the most valued internet companies as well). With a constant slate of new internet streaming-based programming that updates all the time, Netflix has redefined what it means to watch TV and films (as well as how to do it). resurrected the canceled FOX series Lucifer for a fourth season, fan were obviously curious how much the show would change from its previous incarnation. Freed of the needs of FOX's schedule, without the demands to fit to a normal season, or the requirements of broadcast TV, the show could be whatever it wanted. It could find its best self. And it's best self was, well, the same show it's always been, just with a little more naked man butt and the occasional naught word (although never the F-bomb). It was, in a word, the same old Lucifer. 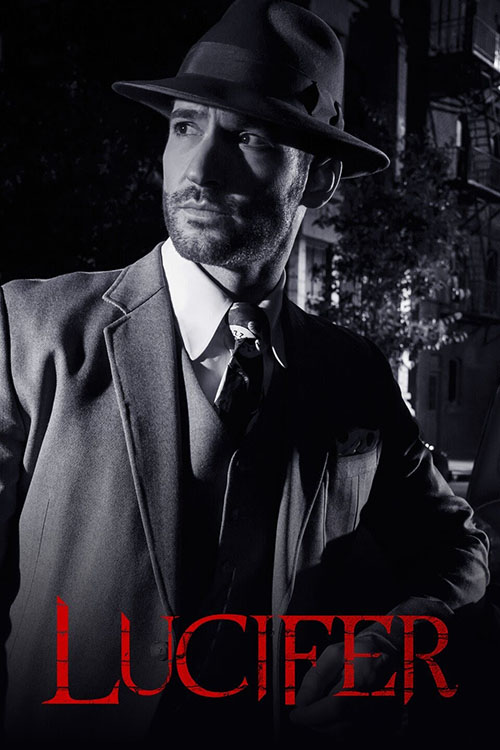 For good or ill, "the same old Lucifer" defines the first half of the fifth season as well. It doesn't try to push itself anywhere outside of its comfort zone, playing to the same strengths and weaknesses its always exhibited. It's a police procedural at its core, with a bog-standard case-of-the-week format that it never strays from, not even when it does various themed episodes to shake up its basic design. Whether its swapping in different characters instead of Lucifer on cases, or having Luci tell a story about his past in the 1940s that, still, somehow becomes a police procedural, the show never wavers from its basic format. Anyone on the fence because they don't like the basic format of the show won't find anything different here. But for those looking for the same old show, that same comfort food, this is the Lucifer you remember.

Where last year the show introduced Eve, this year we have another new character from Heaven: Michael, Lucifer's twin brother (also played by Tom Ellis, Lucifer lead actor, of course). Michael is basically everything Lucifer isn't -- while technically a "good" angel, Michael is basically the lord of lies. He can lie, he can cheat, and he plays on people's fears to manipulate them (whereas Lucifer plays to their desires). He's the "good" son, the one favored in God's eyes, and he's come to take Lucifer's place on Earth. Why? To ruin Lucifer's life and drag him back from Hell.

As you may recall, fourth season ended on a cliffhanger with Luci having to go back to Hell to sit on the throne once more and keep the demons in check so they don't break free and roam Earth. Without Lucifer on Earth, though, Michael could take over his life (literally posing as him) to wreak havoc, all because he's hates his brother and the fact that, even banished to Hell, Lucifer still has favor with God. So he manipulates all of Lucifer's friends and family, stokes their fears, and causes untold chaos, leading to a big battle between Lucifer, Michael, and their brother Amenadiel (D. B. Woodside). Which is where the first half of this season ends, leaving us waiting for a conclusion of this story until later this year (when if finished filming).

While the Heaven and Hell machinations have been part of the series from the beginning, the other part (the part that I'm sure a good portion of the fan base case about) is the love story between Lucifer and Detective Chloe Decker (Lauren German). As we learned previously, Chloe isn't just a woman Luci is interested, but one put on Earth by God himself, a "gift from God" as the show puts it. This bit of knowledge is one of the many things getting in the way of happiness between Luci and Chloe, simply perpetuating their "will they or won't they" dynamic. The show continues to rely on this formula, to tiring effect. 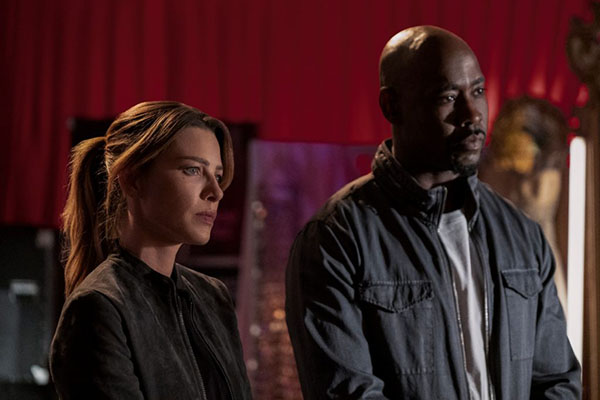 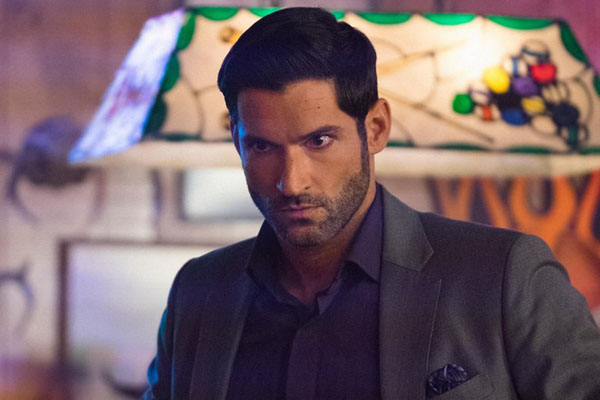 What fans have wanted, and what the show finally gives them, is a consummation of their relationship (again, as the show puts it, they bone). This still doesn't stop the will they/won't they mechanics, though, as the show continues to put trouble in their path, always stopping them from finding happiness time and again. Many shows like this (i.e., shows with a "will they or won't they" relationship) life and die on the relationship itself, falling apart when the two lovers finally get together. Lucifer apparently wants to get around this by never letting the couple our of their will they or won't they plotting even after they obvious already "will". This kind of plotting was amusing two or three seasons back. At this point you just have to think the two of them are toxic and they both need to move on.

At the same time, frankly, Michael is a dud of the character. While Ellis has fun playing a second character, deftly swapping between to two mode of Lucifer and Michael, even with Michael playing both roles at once, the character himself just isn't thrilling. The show doesn't quite know what to do with Michael, basically casting him as a generic villain who, apparently, has been causing problems for Lucifer since the dawn of time. The characters tell us this, mind you, but the show doesn't really show it. Michael is supposed to be a master manipulator, but everything we see him do on the show is half-baked at best.

There are, really, a number of moments that don't quite work for this half season of eight episodes. The aforementioned story time episodes where Lucifer discusses his past is the most glaringly bad episode this season. It's a flashback to another time, introducing a character, Lilith, who won't really have a direct affect on the series after -- yes she spins Lucifer's one-time right hand demon-woman, Lesley-Ann Brandt's Mazikeen, for a loop, but that's not even handled all that convincingly -- and setting we won't revisit again. Plus it hand-handedly forces in the actors of the other characters into different roles for this story, making for just a very weird and awkward episode overall. Other shows have done this same thing -- Bones did an alternate storytelling episode, as did Fringe -- but in every case it just feels like padding since the stories never really affect anything in the series, and it's just the same here.

Also, this raised a bigger continuity issue in the series. We were led to believe, at the start of the series, that Lucifer has been in Hell for centuries but then, one day, got bored and decided to see how the humans kicked it top-side, so he left and has spent five years on "vacation" from Hell. But then we come to learn that he's been on Earth repeatedly, and for extended periods of time? He's comfortable in the 1940s, he used to hang out with Caligula, and he's spent way too much time on Earth. So how long has he really been in Hell? Does he ever actually stay down there? It just doesn't quite work. 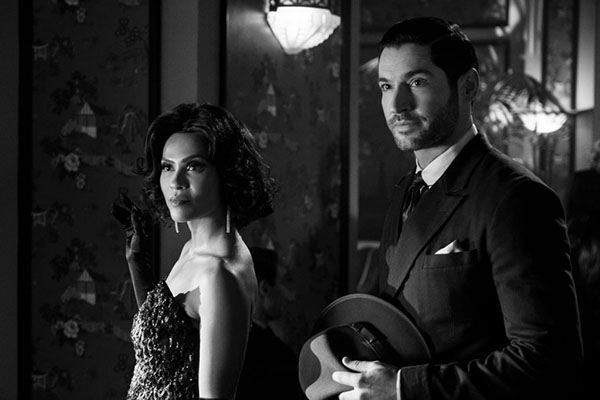 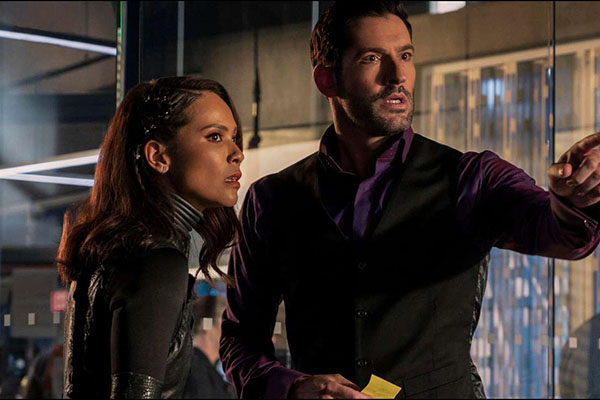 And then the show sometimes manages to pull it all together. There are fun episodes, like Chloe and Amenadiel working a murder at a nunnery, and all the nuns are hot on Amenadiel's reflection of their love for God, or an episode where Chloe and Lucifer have to solve a murder on the set of the hit Devil police procedural, Detective El Diablo. Perhaps the best moment of the eight episodes comes when Amenadiel has a major crisis and Lucifer and Michael have to advise him, leading to a shot of an angel and the Devil literally being on his shoulders. The show still has its brilliant moments, I just feel like they didn't come often enough in this half-season.

Admittedly it's just a half-season, and as the episodes progress the season begins to pick up steam again. Maybe, just maybe, the back-half will be even better than the first; it's possible, for sure. But this first half is wildly uneven at best. The show has had dips in quality and recovered, and it totally could again this time around. For all but the most hardcore Lucifer fans, though, maybe you should just wait until the whole season is completely out before you binge these episodes. Wait to see if reviews of the back-half are better because at that point maybe it'll all come together in the end. Certainly would make for a more satisfying binge in that case.