The Sound of Satan In Your Chimney

The Chilling Adventures of Sabrina: Holiday Special, "A Midwinter's Tale"

Apparently the first season of The Chilling Adventure of Sabrina was really popular. Despite my own issues with the series (in short: not enough happened, character motivations seems muddled, and it was all a bit of a mess), plenty of people were raving about there series. I certainly won't discount those opinions -- I have plenty of my own opinions on TV shows and movies, and I know there are several that I love that others hate. Plus, obviously, I'm not the target demographic for the show -- the horror elements are right up my alley, but the romance and high school themes aren't topics I go out for. The show was just decent enough that I managed to get through it, but I wasn't sure if I could get through another full season before I tuned out. 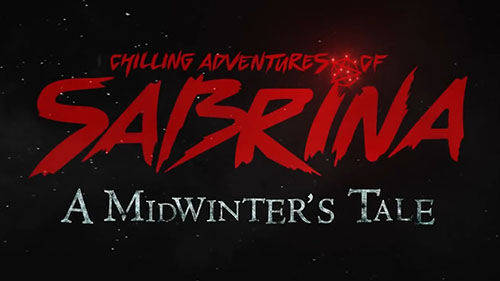 While I'm still up in the air about another full season of the show, NetflixOriginally started as a disc-by-mail service, Netflix has grown to be one of the largest media companies in the world (and one of the most valued internet companies as well). With a constant slate of new internet streaming-based programming that updates all the time, Netflix has redefined what it means to watch TV and films (as well as how to do it). did just put out a Sabrina holiday special. I can do one episode, no matter how bad it may be (just look at how many episodes of "The Gauntlet" from Mystery Science Theater 3000First aired on the independent TV network KTMA, Mystery Science Theater 3000 grew in popularity when it moved to Comedy Central. Spoofing bad movies, the gang on the show watch the flicks and make jokes about them, entertaining its audience with the same kind of shtick many movies watchers provided on their own (just usually not as funny as the MST3K guys could provide). It became an indelible part of the entertainment landscape from there, and lives on today on Netflix. I've sat through -- I live for bad things to watch). I knew going in that, no matter what, I could get through one more episode of this show. Thankfully the episode wasn't bad. I mean, it's not that different from the rest of the show, but it wasn't a terrible hour to sit through.

Eschewing the standard "Holiday Special" trope (where the events of the episode take place outside the main continuity, or in a displaced portion of the time line before or after the events in the main series), Sabrina's holiday special, "A Midwinter's Tale" follows the main continuity of the series and picks up just a couple of months after everything went down at the end of season one. Sabrina is still going to Greendale High (and I keep waiting for the cast of Community to show up) and attending the witchy school in the afternoon. Her friends are awkward around her now that they know she's a witch, while her ex-boyfriend, (the terribly named) Harvey Kinkle, is still totally freaked out by her and her magic. Of course, magic and witches and demons and such are still a part of life no matter how much the people close to Sabrina try to avoid it (and her). This becomes pretty obvious when one of Sabrina's two besties, Susie, goes missing the night of the Solstice.

Not that Sabrina can immediately investigate this as she has other magical problems going on. A seance to talk to her mother ends poorly and accidentally allows Yule Boys (holiday poltergeists) into her house, trapping Sabrina, her cousin Ambrose, and her two aunties in the house until they can get rid of the magical threats. This involves summoning an ancient witch and making a wicked deal that might put many innocent lives at risk. And then there's Sabrina's meddling nature, which drives a bigger rift between her an Harvey than there was before. It's all so much for a high schooler to deal with.

Focusing on the main plot line, the Yule Boys are a weird and silly story segment. While their initial appearance has some thrill to it as they move quickly around the house and nearly kill every member of the family in one form or another. Sadly, soon their "mother", the ancient witch, is summoned, and that whole plot line just kind of peters out. The ghosts go from a real threat to just a minor annoyance, and then are just as easily forgotten altogether. 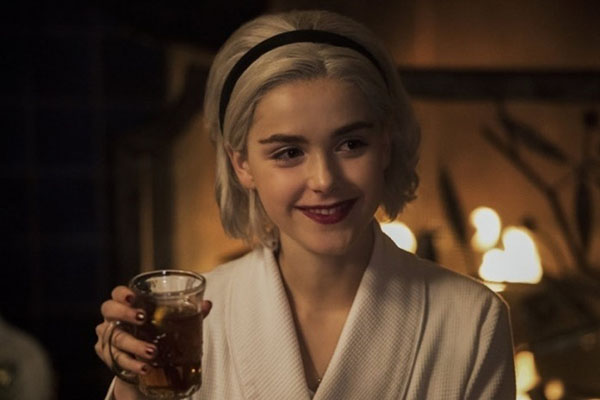 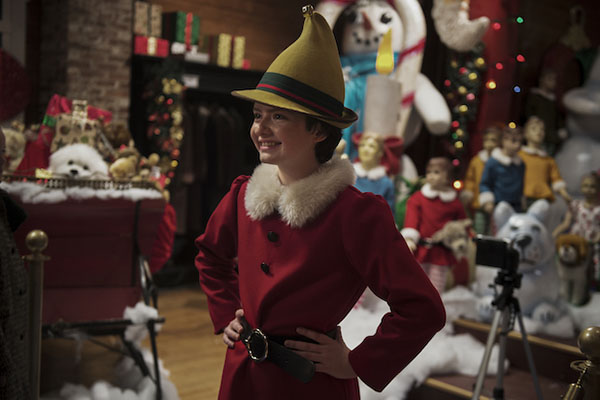 Susie's plot line is slightly better. She's captured by an evil department store owner (after she starts working at the store as that year's Santa's Grotto elf). The evil guy is actually an evil demon, one that captures pretty kids and then turns them (painfully and against their will) into wax statues. While not necessarily the most creative plot line I've ever seen (I've sat through the original Waxwork and the House of Wax remake multiple times), the show at least plays up the creepy vibes (and Susie's terror). As a YA show it never quite gets gory enough to truly sell the scares, but it does a good job with the creeping dread. As a bonus, this plot line ties in nicely to the main story about the Yule Boys and their Mother, giving both halves a decently satisfying conclusion.

The big issue with the episode, though, are in the two side characters: Ms. Wardwell (the antagonist of the first season) and Harvey. Harvey has always been a problem on the show, a vacuous presence that never seems to do much for the story as a whole. I blame most of this on the actor, Ross Lynch, who has negative charisma (if charisma were a particle in the universe, Lynch would be made of so much anti-charisma he would have condensed into himself years ago). It's hard to care about him, his relationship with Sabrina, or his feelings about her meddling because you just can't care about Harvey. The show would be so much better off if Harvey was just written out entirely.

Not that Sabrina is above blame, either. She's a character that just can't stop meddling, toying with magics she can't control all to try and "fix" things that shouldn't be fixed. After trying to resurrection Harvey's dead brother last season (which is what caused him to break up with her when that went horribly off the rails) one would think she would have learned not to meddle with her magic. Or, at the very least, one would assume she'd know to keep that away from Harvey. Instead, she gives him magical colored pencils as a present (which he naturally hates), and then gives his father magically-spiked egg nog (to cure him of his alcoholism). Harvey isn't happy with any, much to Sabrina's chagrin. But she should have known, and every time she stuck her nose (with her magic) in again, I raged a little inside.

Although at least one of the problems in the show wasn't caused directly by Sabrina. Ms. Wardwell (catching wind of Sabrina and her attempt to contact her mother via seance), meddles in the magics protecting Sabrina's house which directly causes the Yule Boys to show up. This was all to stop Sabrina from learning some truth or another from her mother and putting the Devil's plans for Sabrina into doubt. Wardwell isn't really a presence in the episode, though, and her meddling doesn't really cause any big issues for Sabrina. The girl still talks to her mother, still is able to handle all the trouble that comes her way, and ends the episode feeling better about herself than before. So what was the point? Wardwell could have been written out of the episode and everything could have directly been Sabrina's fault. It would have worked just as well and, in the process, would have tightened up the plotting of the episode. 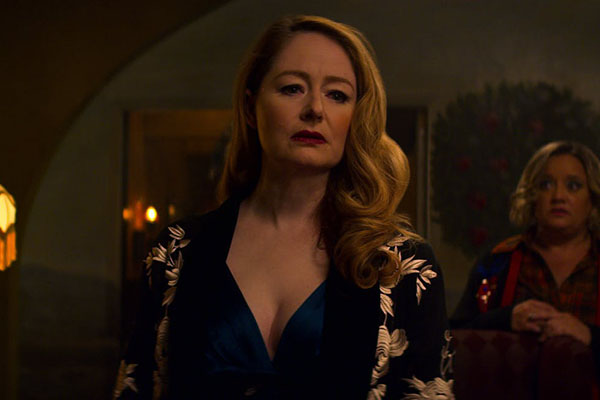 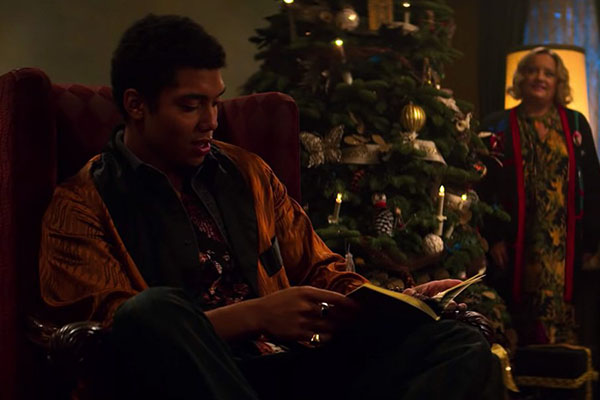 But then that speaks to a larger issue with The Chilling Adventures of Sabrina: we still don't understand what the Devil's plan is for her or why should we care. When you have a series where half the "good guys" are Satan worshippers, it's hard to know of Satan is supposed to be a "bad guy" here or not. The show just assumes we'll be against the Devil and his plans for Sabrina, but you can't make that leap when the motivations for the character are clouded, his plans unrevealed. We can't care if Wardwell meddles in Sabrina's life or not because, since she's working for the Devil, maybe in the end everything she's done will elevate the young girl. We just don't know.>

As a single episode of Sabrina, "A Midwinter's Tale" is pretty decent. It's flawed, like the rest of the series, but enjoyable enough on its own (without burying viewers too deeply in the overarching story). It's just a problem that even now we don't know where everything is going, which makes it hard to really care. This episode doesn't fix that and by shoehorning in Harvey and Wardwell into the plot line (where they aren't really needed), the show continues to struggle.