Let the Right Devil In

The Chilling Adventures of Sabrina: Part 2

I've noted in the past that I'm not that big a fan of this show. While in theory a Chilling Adventures of Sabrina series should be right in my wheelhouse -- witches and fantasy creatures doing horrifying things -- the show itself has left me feeling a tad cold. The first half of season one was a bit of a mess overall, with characters constantly waffling back and forth over what they felt. The Holiday Special muddied the waters further and only seemed to confuse the plotting of the series moving forward. Presumably the show had some place it wanted to go, a story it wanted to tell, but it was very hard to know, or care, what that would be at all. 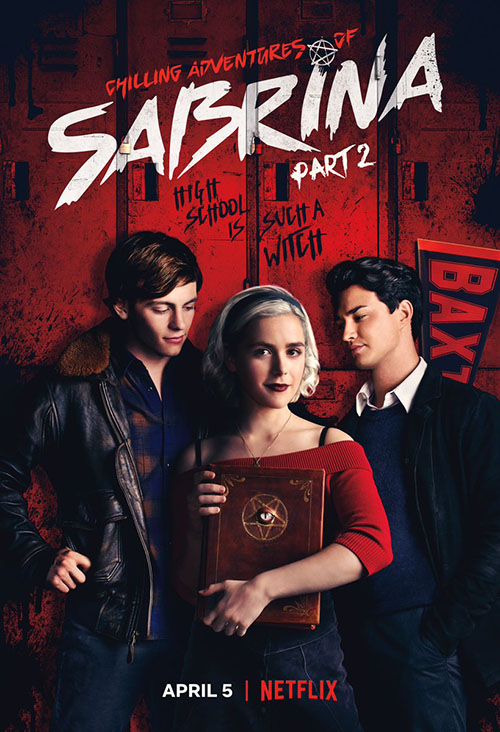 With the back half now debuting on the show, it is clear that a specific plan was put in place for the series. It's just that, unfortunately, the overall season arc really doesn't work as a unified whole. Worse, the show still doesn't seem to be able to get over its worst impulses, telling a convoluted mess of a story with characters wildly swinging between motivations, all to get the characters to an end point that hardly seems justified. Frankly, this show needs a lot of work.

As last we connected with Sabrina, she's essentially dropped her old life back at her mortal public school (with all her friends) and shifted over to going to the witches academy full time. She wants to dedicate her life to magic now that's she's signed her name to the Book of the Beast and, essentially, become Satan's play thing. This leaves her torn even more between her two worlds. The witches don't really accept her because she's only half-witch (as her mother was a mortal), but her human friends are now afraid of her (at least a little bit) because of her magical abilities (and constant need to push boundaries and take chances). She's going to have to figure out where she truly resides and what side she wants to be on when Satan's final plan comes together. It could be Hell on Earth and, somehow, Sabrina is the key to it all.

The first complaint I have with the second half of season one of The Chilling Adventures of Sabrina is the same issue I had with the first season: I still don't know if we're supposed to be rooting for or against the witches. Sabrina's aunts, Zelda and Hilda, as well as her cousin, Ambrose, are treated like protagonists by the show, good people who happen to be witches. Except they're also Satan-worshipers who treat humans essentially like cattle. Human sacrifices, demonic acts, and dark magics are all the norm and no one in the witch community, not even these supposedly good-hearted people, seem to mind so much. Heck, even the nicest of them, Hilda, isn't above killing one foe that threatens her family. It's hard to align with these characters when their moral code is so skewed

It's worse once we actually start looking at the witch and warlock characters on the show outside Sabrina's family. None of them see at all redeemable, all of them deeply into their Satan worship and dark arts. Every week se4em to bring some new ritual that hints at the old, sacrificial magics the witches used to perform (and, if given half a chance, gladly do again). Half of them are outright rooting for Satan to come and walk the Earth while the other half really don't seem to have any opinion on the matter, they just want to keep doing whatever makes them feel good, consequences be damned. 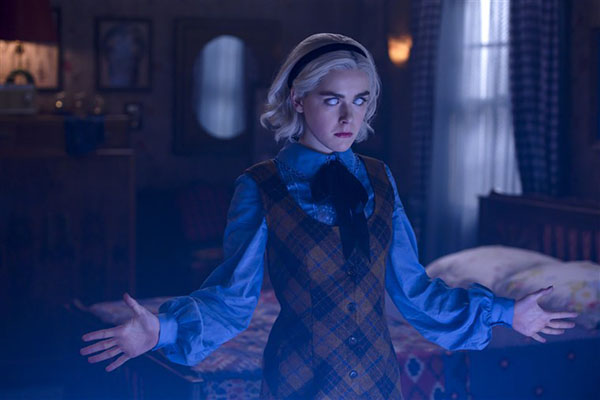 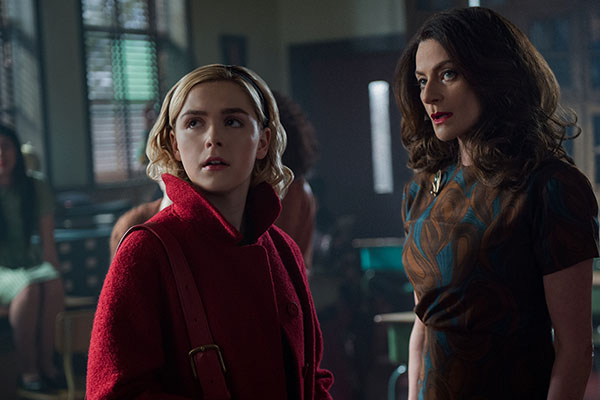 With a spate of characters like that, ones that are so clearly telegraphed as evil, a group of characters is required to balance them out. That should be the mortals on this show, except they're all so bland. The first half of first season started to build up some of Sabrina's friends, like Roz Walker, who comes from a long line of female seers, and Theo (Susie) Putnam, a trans boy slowly going through his changes to become the person he wants to be. These should be interesting characters with interesting stories, but the show largely sidelines them until their needs are narratively convenient. Theo is especially under-served with his transition used as fodder for Sabrina's machinations instead of as a fully realized plot line. I like these characters but the show barely spends enough time on them for us to care at this point.

There there's Harvey Kinkle, Sabrina's ex-boyfriend. He's an absolute and utter bore and yet the show keeps bringing him back. He broke up with Sabrina at the end of the last half of the season and you'd think that would have improved the series since it would have meant less Harvey. The character, though, keeps showing up, hanging out with Sabrina's mortal friends and inserting himself, blandly, into storylines only to then be forced to take a backseat because, as a mortal, he's really not equipped to help out in any meaningful way. This show would be so much better if it would just ditch Harvey entirely.

But then, it would also be great if the show would ditch the witches altogether as well. They're too cartoonishly evil to be effective villains but they aren't fully realized enough to be interesting characters in any capacity. The show spends so much time on the witches this season, but I feel like I know as much about them as I do Harvey. They're just there, background filler saying evil things before the show moves on to other, also uninteresting, things. It's just a chore.

That extends to the big climax of the season as well once Satan's plans come to fruition. I won't spoil too much about how that all plays out, but suffice it to say that things wrap up a little more neatly than I would have expected considering the fact that the big bad is the Prince of Darkness himself. This is a villain that should have served as the cap to an entire series but, at least for now, his storyline is effectively ended. It leaves me confused as to where the show can go from here considering that they've just taken one of the biggest villains ever off the table. How do you top Satan? Do you bring him back again to diminishing returns, of find some other deity to use instead? Whatever they do, it just won't feel anywhere near as epic as it could have if they would have just pursued Satan to the fullest. 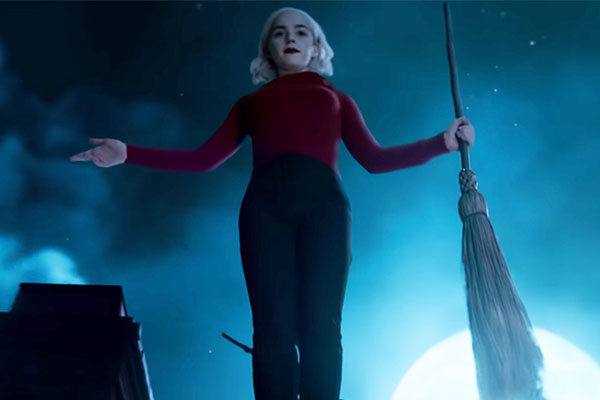 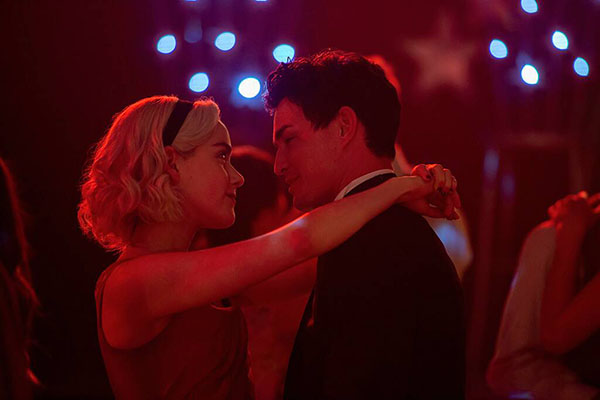 That said, the last couple of episodes are where much of the real plot machinations of the show occur, and they are among the best of the season. There's an energy to the episodes that was missing through much of the back-half of the season, and by the time the credits rolled on season one, I was actually half-way interesting in seeing what the series had in store after things. I'm sure it'll probably just be more monotony back at Sabrina's mortal high school, that all the energy the show managed to muster will fizzle out quickly and for no reason. Still, there's a glimmer of hope that maybe this show can finally course correct and become something more interesting than the sum of its parts.

For now, The Chilling Adventures of Sabrina should be considered a "pass" for most viewers. It's not solid enough to entertain most people and needs more time to grow before it'll become a show that anyone other than the most hardcore of fans (or people, like me, that are truly bored and scrolling through NetflixOriginally started as a disc-by-mail service, Netflix has grown to be one of the largest media companies in the world (and one of the most valued internet companies as well). With a constant slate of new internet streaming-based programming that updates all the time, Netflix has redefined what it means to watch TV and films (as well as how to do it).) will care about. If you haven't already tried watching it, maybe give it another year just to see if the show gets any better.