It feels weird to me to say this, but The Last Kingdom is a really good show. It's weird because I've been watching this show since it first debuted on BBC America (before getting kicked to the curb and then picked up by NetflixOriginally started as a disc-by-mail service, Netflix has grown to be one of the largest media companies in the world (and one of the most valued internet companies as well). With a constant slate of new internet streaming-based programming that updates all the time, Netflix has redefined what it means to watch TV and films (as well as how to do it).) and at the time the show wasn't great. It wasn't terrible, to be sure, but there was something missing from the show. It lacked the necessary hook to make it a must-watch... but then, over the years, it shifted and matured until it became the show it is now. 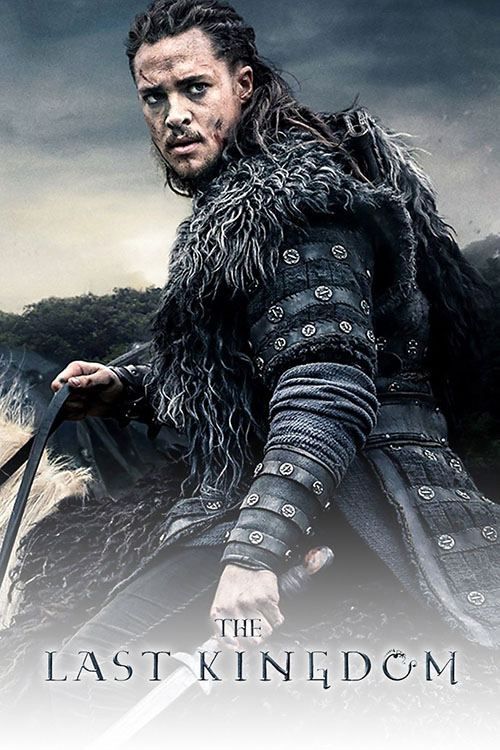 I've read a lot of pieces about the show lately, glowing praise for how the series has grown into an international hit. Even though I've watched the season myself, I still think to myself, everything, "we're talking about The Last Kingdom, right? That show?" And if all you've seen of the show is the first, terrible season, then you'd probably agree with me. Why would people care about The Last Kingdom? What's so special about it now?

Okay, so maybe calling the first season "terrible" is a bit harsh. In the early run, our hero, Uhtred of Bebbanburg (played as an adult by Alexander Dreymon), is the son of lord of the city, Uhtred of Bebbanburg (and every episode, in the recap, the adult version tells us "I am Uhtred, son of Uhtred"). Uhtred the elder must protect his city from Danes (read: Vikings, Norse, Germanic invaders) as the Danish invaders work their way across fledgling England. Unfortunately, the lord is killed in the battle. The younger Uhtred is betrayed by his uncle, who usurps the city, and the young Uhtred is captured by the Danes to be their slave. However, he soon earns the respect of the Danes and is adopted into their clan.

Years later, having been raised as a Dane, Uhtred sets out for Bebbanburg to recapture his city. However, he soon gets mixed up with Alfred, King of Wessex (David Dawson), and is forced to swear fealty to the king. This then leads to a series of events where Uhtred gains his freedom, is ready to go fight for his city, only to get sucked back into the politics of the region again, and then has to repeat the whole affair again.

The plot really does jerk Uhtred around, left and right, never giving him what he wants. He gains his freedom from the Danes only to be captures by the Angles. Alfred forced him to serve as his sword, but then he gives Uhtred a lordship. However, Uhtred then is forced to make some impossible choice, and Alfred forces a new promise of fealty out of the lord. And then again. And then again. It's always two steps forward, two steps back for Uhtred, and even now, three seasons in (and close to ten years in the show since Uhtred grew up to be a man), Uhtred has yet to get back to Bebbanburg to reclaim his city. 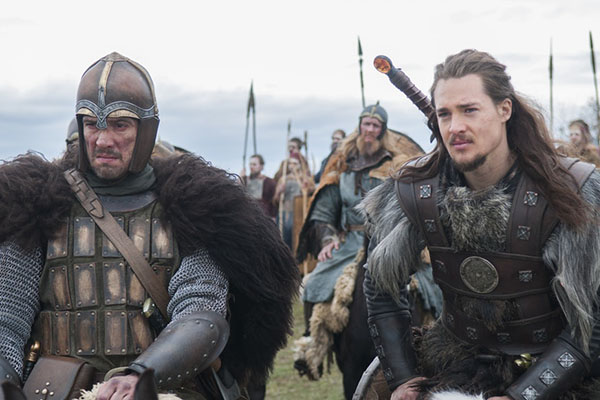 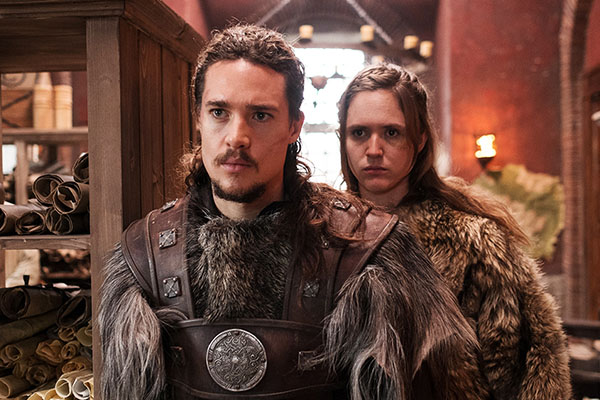 This has always been my problem with the show -- Uhtred can never get ahead because the show-runners want abuse him time and again. "Hey, let's give Uhtred a wife, and then kill her just because." This happens more than once. "Hey, let's have a priest anger Uhtred, forcing the Danish-raised Lord to choose between Christian and heathen ways, and punish him regardless of which choice he makes." That happens often, too. It's almost guaranteed that any time Uhtred is about to win, finally, some knew twist to the scenario will come up, jerking him around once more. At a certain point, if I were Uhtred, I would have just walked to the coast, found a boat, and set sail for anywhere that wasn't England. Clearly the British isle is cursed.

Really, much of the problem stems from Alfred. As written on the show, Alfred is a power-hungry monarch, always looking for a leg up in any situation (all so he can try and build a single, unified nation of England). The problem with his character is that he never suffers for any of the bad things he does -- sure, by the end of third season he does finally die of cancer or something (his exact illness is never made clear), but that's only after he's abused Uhtred who knows how many times up till then. Even after dying, the king is still honored, given a royal burial while, even still, Uhtred is jerked around once more by the Queen just for good measure. But up 'til that time, every maneuver, every machination the king pursues is rewarded. He gets ahead (mostly because Uhtred, as written, is a brilliant and honorable tactician) without ever once suffering for his sins.

It's a curious decision to make since Alfred should act as a kind of stand-in for Uhtred's own uncle. See, Alfred wasn't supposed to be king, but when his brother died Alfred stepped in an usurped the throne out from under his nephew, Aethelwold. In the eyes of Uhtred's own journey, he should have no respect for Alfred and, eventually, the battle for the soul of the show should come down to a proper confrontation between Uhtred and Alfred. But that doesn't happen -- a neat parallel is setup and never pursued by the show.

My issues with the story fade some, though, as the series progressed into third season. At least here Uhtred regains his agency, in a way. After assaulting yet another priest (after the priest insulted Uhtred's dead wife), the lord is forced to go on the run, branded an outlaw by the king. He then gets to have his own journey, being a bad-ass and fighting English and Danes as he finds his own path across the island nation. He does, of course, get wrapped back up in the politics of Wessex, but the show at least lets it be on his terms for once. Honestly, once the end of third season comes around, it felt like the show was in such a good place that the series could have just ended there. Supposedly a fourth season is in development, but the show has grown enough already that whether that season happens or not, the series has told a full and satisfying story. 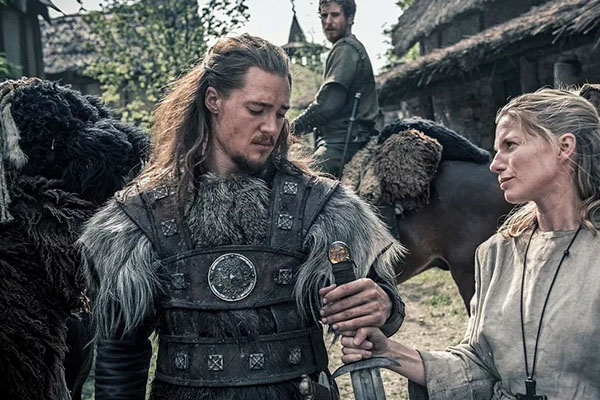 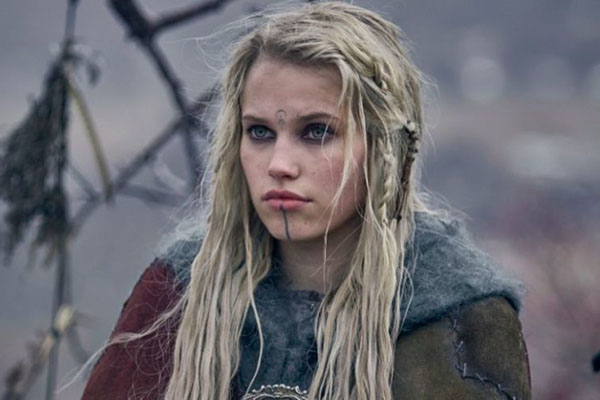 And it tells it well. While I'm sure the show isn't as historically accurate as it could be -- for starters, the likely inspiration for Uhtred lived 100 years after the era of the show -- the production design of the English and the Danes still makes it seem pretty close to accurate. Hollywood accurate, if you will (not unlike another series set in this era, 6ikings). Costumes and sets seem appropriately accurate (hand-made, worn, and at times delightfully shoddy), allowing you to feel like you're peering into a past world (and not just a set with actors where the cameras and lights are all just out of view). Of course, all the people still speak proper, modern English, and using common words (like Winchester, England, and the like) that shouldn't be in their vernacular just yet. All that is forgivable, though, as a solid attempt is made to make it all seem pretty close to realistic, and some considerations have to be made for modern audiences, of course.

The acting has also grown and improved over the course of the series. While most of the actors were never terrible, it certainly took Dreymon some time to grow into his role as Uhtred. By third season, though, he's a force, a charismatic lead carrying the show as the focus drifts further away from Alfred. Despite not liking the character of Alfred, I always felt like the actor, Dawson, did a great job playing him. Certainly all the side characters grew along with the show as well, but it's these two leads that carry the proceedings, and by the end of third season, even just a scene of the two of them sitting apart from each other crackles with intensity.

So, for me, we're back to it being weird how good this show has become. It was uneven when it started, with a lead actor that wasn't quite ready to carry the show. And they it got a second life on Netflix, and grew, and improved. Now it's a solid contender, a great historical fiction drama that easy to binge each time it's released. It's certainly one of Netflix's better shows at this point, so if you're in the mood for a little historical action, it wouldn't hurt to give The Last Kingdom. If you can make it through the first season, you'll certainly be rewarded.