For the (Lack of) Glory of the Sword

Oh, Frank Miller. You're a strange, crazy, racist dude and I'm amazed anyone even lets you near projects at this point. Considering all the garbage stories you've written lately -- Holy Terror (aka, "Holy Terror, Batman!"), All-Star Batman and Robin!, and, frankly, everything associated with 300 -- I just assumed everyone was tired of your shit. But then we get the new NetflixOriginally started as a disc-by-mail service, Netflix has grown to be one of the largest media companies in the world (and one of the most valued internet companies as well). With a constant slate of new internet streaming-based programming that updates all the time, Netflix has redefined what it means to watch TV and films (as well as how to do it). from Miller (and co-producer Tom Wheeler who's big credit is being the show-runner of The Cape, which isn't a credit I'd want) and I have to question, once again, why people give Miller power and money. 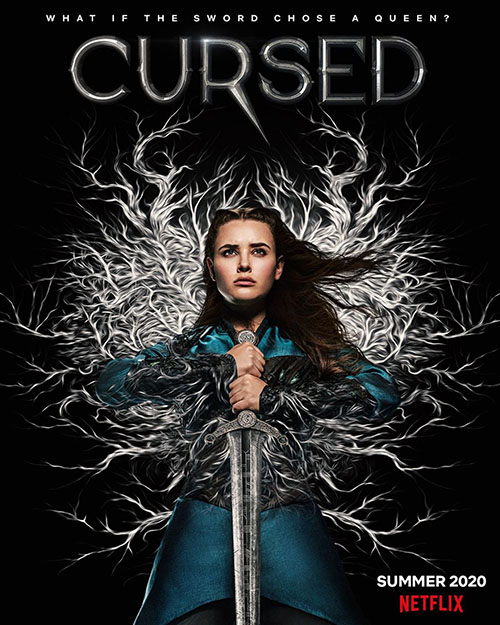 It's not that the basic concept of a show like Cursed is bad. I like the idea of re-imagining Arthurian legend from the perspective of a female character. There's a lot that can be done with that whole set of stories, and plenty of strong authors have found new ways to mine the basic materials and come up with poignant tales. But Miller is not a good author and his series is flawed in so many ways, telling a shallow yet horribly xenophobic tale that it's hard to get behind anything going on in the story. Fleeting moments of greatness do not redeem this series as a whole.

Cursed is focused on Nimue (Katherine Langford), a Fae girl with immense power she absolutely doesn't want. Shunned as a witch even within her own Fae clan, Nimue wants nothing more than to flee her homeland and go live somewhere among the humans where no one knows her and no one treats her different. Unfortunately for Nimue, her whole world is thrown into disarray when the Red Paladins, a religious sect that wants to wipe the Fae from the face of the Holy Roman Empire, comes to her homeland, burns her village, and kills essentially everyone she's ever known.

With her mother's dying wish, Nimue flees the burning village with explicit orders to take a relic, a magical sword that the Fae have been guarding for years, to the sorcerer Merlin (Gustaf Skarsgard) so that he can... well, do something with it. Along the way Nimue will make friends with Arthur (Devon Terrell) and his sister Morgana (Shalom Brune-Franklin), a knight and a nun respectively, who will be come her closest allies. And, as the Fae come together, and Nimue learns more about the sword in her possession, it becomes clear that a war is brewing and Nimue is the only one that can lead her people to salvation.

I have a number of issues with Cursed, much of them because Miller comes at the Arthurian content with about as much grace as he used in the telling of 300 (i.e.: exactly none). The first issue I had was with the historical accuracy of the tale itself. I know that searching for accuracy in television, especially a series based on myth and legend, is a bit of a folly but we should at least be able to expect basic details to be right: the tales of Arthur date the character to around 500-600 AD, when the Catholic church was only rising in power, and set him as a British king who had nothing to do with the Holy Roman Empire, which, it should be noted, came about in the 800s AD and never touched Britain. These are facts that are hard to dispute and when a show gets it wrong you have to stop and marvel at its stupidity. 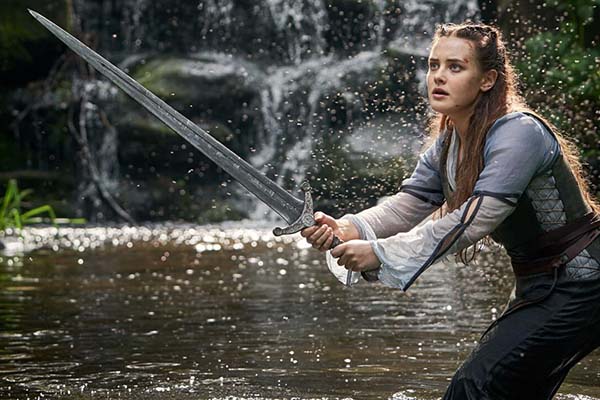 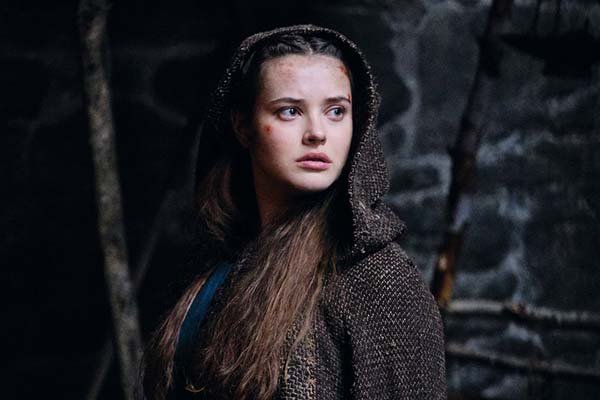 Getting details wrong sets the whole show on a bad foot. Yes, you can still watch the show past that point, but now we're in a fanciful world that has no bearing on reality whatsoever. It means the show can pull whatever tricks it wants and it doesn't have to base them on history, or logic, or its own internal rules because nothing has justify itself. Miller had the same issues in 300, changing whatever details he liked, no matter how far outside the bounds of reality (or good taste) it stretched, and the same issues permeate Cursed -- it's hard to care about a show when logic and reality have no bearing on the story.

As bad as that is, it's nothing in comparison to just how bad the actual story becomes. Nimue is our lead character and she's, frankly, awful. This isn't the fault of Langford, who is a solid actress and manages to be charismatic and interesting at times as Nimue. The flaw lies in the story itself that gives us yet another play on the "reluctant female hero who just wants to be left alone but ends up having to lead her people" trope. We've seen this specific story how many times recently, from Warrior Nun to The 100 and even shades of it all the way back in Buffy the Vampire Slayer. It's just a way to pad out the story and draw out the inevitable moment when our hero picks up her sword (in this case literally) to become the hero we knew she was going to be because it was in the trailer, but the show draws it out for six episodes or so.

Worse, though, is that Nimue is such a bland character. She has powers, which are interesting if rather unexplained (a kind of "catch all" so the series can do whatever it wants with her abilities), but she spends so long running from her destiny, and being a dick to everyone around her, that she's just not engaging at all as a hero. The back-half of the season tries to repair her image, making her more interesting and likable, but by then the damage is done. There are other, more interesting characters around her you'd rather had the sword, but it's Nimue's burden to bear and she's our burden as well.

Skarsgard's Merlin is one of those vastly more interesting characters, but that's because Skarsgard is a charismatic delight who can see anything. He played Floki on Vikings and made a crazy character absolutely riveting to watch. He brings that same charisma to Merlin, stealing every scene he's given just by his very presence. Merlin isn't a well written character -- none of the characters are -- but he is at least fun to watch in Skarsgard's hands. 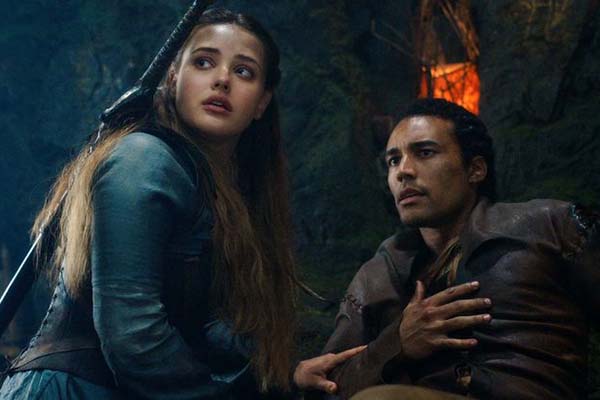 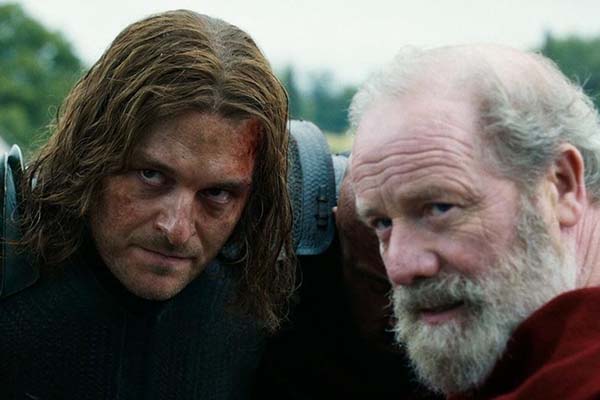 The rest of the cast just doesn't have the same ability to sell the material they're given. Terrell as Arthur is as bland as Langford's Nimue, and the later injection of Matt Stokoe's Gawain doesn't improve matters, adding in an unnecessary love triangle among three bland characters. Brune-Franklin has her own level of charisma and acting chops, but Morgana is given very little to do almost until the end of the season, and by then it's too late. This show serious sets up so many characters and squanders them all under bland storytelling and bad ideas.

As if realizing the show doesn't have anyone to root for, it just keeps adding on more and more factions to distract the viewers from the lack of heroes or plot progression. There are the Fae, the Red Paladins, another sect of black-robed Catholic warriors, two different Viking tribes, a group of magical lepers, and Uther Pendragon and his armies. Everyone is vying for the sword, a relic that apparently bestows great power but drives its wielders mad with blood lust, but they mostly just fight with each other and never get any closer to the sword. Round and round everyone spins, but no one of any import does anything useful. It just keeps going on, tediously.

And through it all the show is just ugly. Not in production values, although it has the budget and style of a mid-grade CW series, but in story. This show is so obsessed with hate, with the ugliness of man and the atrocities the Paladins will perform against the Fae I'd say this is a turn for Miller, that at least he's siding with the minority instead of the white majority, but it really just lets him torture the Fae over and over again, sating his need for pain and violence. This is one of the nastiest, most vile YA productions I've seen in some time, and I really have to wonder what lesson we're supposed to take from all this. Fantasy creatures should be saved and the Church is universally evil? I'm not sure that's a morally that's going to please too many people.

By the end of the season I was just tired. There are a few epic moments in the last episode that at least have momentum and help to carry the story forward some, but at the same time I had a real hard time caring. I don't like anyone on the show, aside from Merlin, and I don't really care what happens to Nimue, Arthur, or the sword. If this is supposed to be a tale about how Nimue (who I assume will be the Lady in the Lake) guides Arthur to become the king of the Britons, it's got a long way to go before it makes that story engaging. And, frankly, I just don't have the energy to stick around for that ride, boring and ugly as it'll likely be.