Just Don't Worry About It

Austin Powers: The Spy Who Shagged Me

When Austin Powers: International Man of Mystery came out back in 1997 it was a fun, silly little riff on James BondThe world's most famous secret agent, James Bond has starred not only in dozens of books but also one of the most famous, and certainly the longest running, film franchises of all time.. At the time of its release, the Bond series had, itself, verged over the line into self-parody with the awful Tomorrow Never Dies, and it seemed ripe for parody. Hell, the series always had at least one foot in that pool, ever since the Roger Moore era, if not before, so Austin Powers just helped to illuminate the silliness that was already inherent in the world's most famous secret agent. 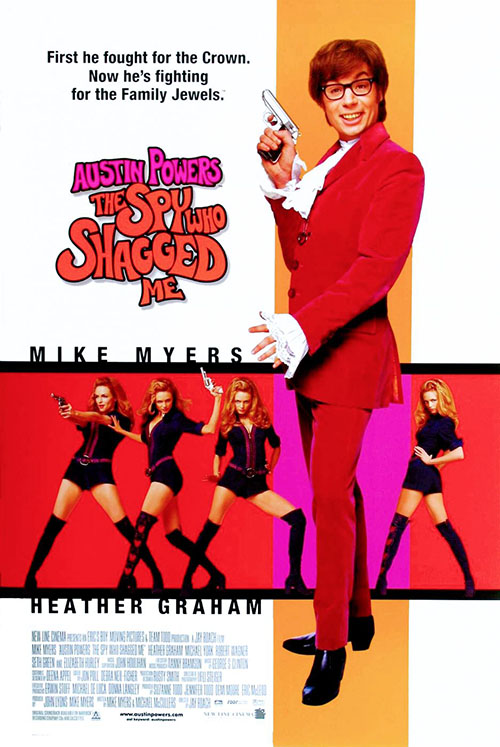 That film was modestly budgeted and became something of a minor hit for New Line Cinema, and found ever greater success on home video (coming out right as DVD was picking up steam, something of a right place, right time release for everyone wanting to buy fun, cheap movies to watch at home. Inevitably, then, a sequel was green lit with Mike Myers and his director, Jay Roach, returning to the well for another Austin Powers adventure. This time, though, the film became an honest, smashing hit, raking in over $300 Mil (nearly ten times its budget) and, for a time, becoming the highest grossing comedy ever.

So what made this film so much bigger than its predecessor? Some of that can be chalked up to the good will garnered by that first film. The original Austin Powers is a silly lark (as we discussed in the review of that film) and while it might be a little shaggy around the edges, it was also fun. It didn't take itself too seriously, had a lot of fun poking at the material it was parodying, and certain put jokes and laughs above the need to tell any kind of cohesive story. Whether you liked that or not really depending on whether you wanted adventure or just to laugh, but plenty who saw the film appreciated it for its utter joy.

In that regard it's actually a lot like another Mike Myers film: Wayne's World. Like Austin Powers, the adventures of Wayne and Garth don't really have much drama to them. Everything they do it for the laughs, to get a rise and to poke fun at a situation. Most of Wayne's World is sketches, and Austin Powers follows the same tack. If anything, you can even kind of see where the two really follow a similar formula: dopey guy meets hot woman and battles for her affections while taking care of a suave and nasty villain. Swap our Rob Lowe for another Mike Myers character and you can really see it all come together.

This sequel doesn't really tread far from what worked the first time around. It is, once again, largely a bunch of sketches with some thin veneer of a plot. Austin's honeymoon goes south as his new wife, Vanessa (a cameoing Elizabeth Hurley), is revealed to be a fem-bot. Although Austin survives his attacks, Austin (Myers) is momentarily heartbroken to realize he's single again. Then he's overjoyed to realize he's single again. Now all he has to do is find Dr. Evil (also Myers) and bring him to justice. 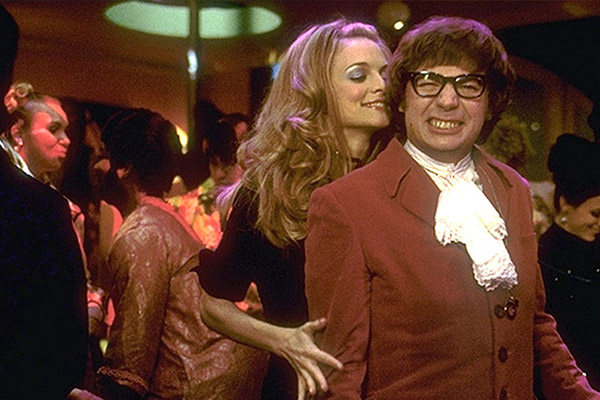 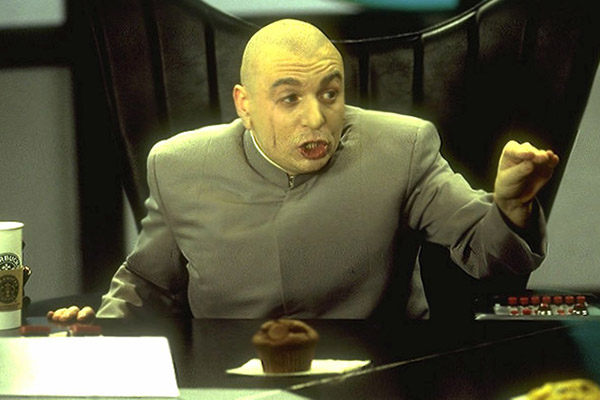 As it turns out, at that moment Dr. Evil returns from another frozen jaunt in space. This time he has a plan to steal Austin's mojo, the force that makes Austin an International Man of Mystery, from the past so that Austin can never be a problem again. Dr. Evil, with the use of his "time machine" goes back and has an agent, Fat Bastard (again, Myers) steal the "mojo". This leads Austin to travel back as well to try and get his mojo back. Along the way he picks up a new love interest, CIA agent Felicity Shagwell, and the two do their best to bring down Dr. Evil and his awful plans.

Parts of this adventure I actually liked. Any time Dr. Evil and his son, Scott (Seth Green) were on screen together they continued their hate/hate banter that worked so well the first time around. Honestly, giving the Blofeld-type character a son that criticizes and critiques everything he does is a stroke of genius. Plus, the film complicates this dynamic by giving Dr. Evil a new clone, Mini-Me (Verne Troyer), and the three characters bounced off each other so well. I know there are people that really didn't like Mini-Me but I thought the character was hilarious.

There are parts of the film, though, that really don't work. The biggest issue (and pardon the pun there), is the one-ton man, Fat Bastard. This character is awful, an all around terrible character that should have never made it past the scripting phase. The joke of him is that he's fat, and Scottish, and... well, that's about it. I've never found the character funny and, going back to this film now, he's just absolutely cringe-tastic. The film would be better of if it has used any other character as the agent that went to steal Austin's mojo. Any character.

And then there's Felicity Shagwell. I think, in concept, the character idea works. Certainly I like the idea of an American agent that's just as randy, and fun-loving, as Austin, essentially acting as a female version of Austin himself. At the same time, though, Heather Graham seems utterly lost in the role. She's cute and sexy but she doesn't have the comedic chops to make Felicity work as a character, and the times where she's expected to carry a scene leave the whole sequence feeling flat. Not everyone can do comedy, and it seems like Graham maybe should have tried her hands at something else. 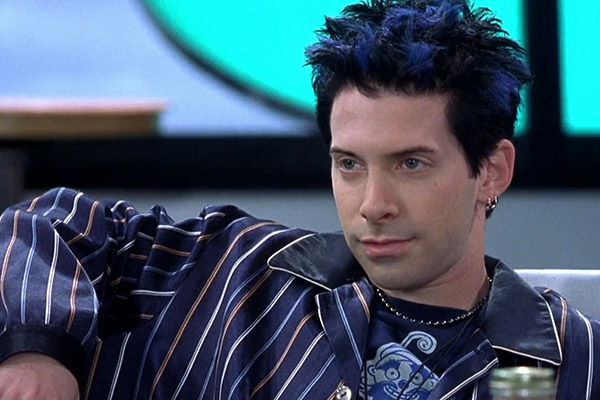 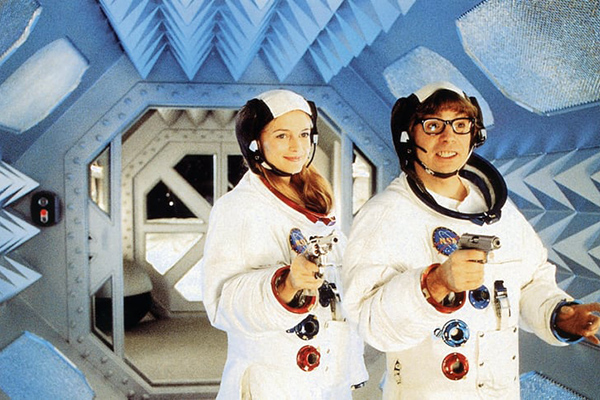 And there are the gags that already started to get recycled from the previous film, such as Dr. Evil shushing Scott. This film actually sets up more jokes that will get reused (and overused) in the next film, but the material that carries over here from the previous movie isn't as funny as any of the new stuff that the movie can bring to the table (well, except for Fat Bastard, because ugh). This film is less a Bond parody and more just a shaggy comedy, and sometimes that works, but you could already tell the concept was starting to wear thin here and that the writers were beginning to struggle to come up one hundred percent new material.

This is a funny at times film that, maybe, doesn't hold up as well as it used to. I don't think it's as strong as the first film in the movie but it rode a wave of good will to become a Box Office champ. That's great, and I'm glad the series finally got its respect as that meant more people went to see the first movie after. But it also meant that we had to get a third film in the series, and where I'm on the fence about this one, I know that one is utterly awful...