Not the Only Thing Made of Gold

So far, going through the series one movie at a time, I haven't been impressed with the James Bond films. This didn't really surprise me as, in the past, attempts at watching the movies ended with me wandering away, bored. James Bond, I always felt, was a character I just couldn't get into, and while I didn't completely hate Dr. No it also didn't wow me (while the less said about From Russia with Love, the better). 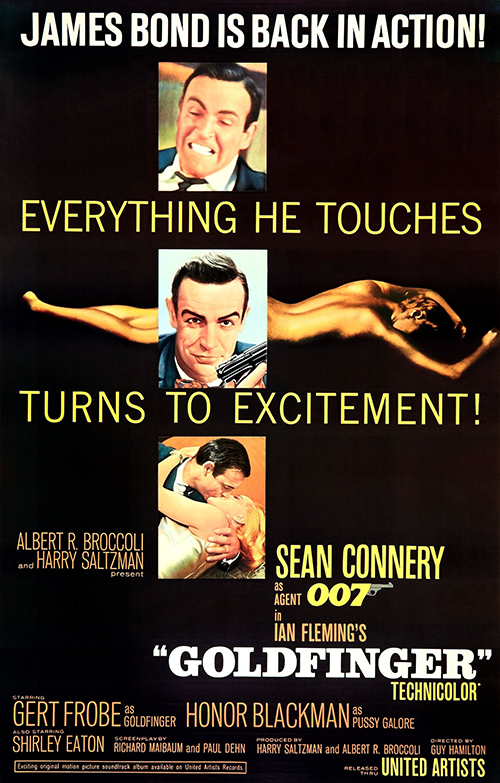 However, having now gotten to one of the most iconic films in the series, Goldfinger, I can begin to understand the appeal. I say that knowing this film might be a one-off that could be an exception to the series and not the rule -- it has a villain who, presumably, doesn't show up again, with no connection to SPECTRE or any grander plans for a connected universe. Instead of trying to world build or promise big things to come, Goldfinger focuses on the interplay between villain and hero, building up the relationship between the two, for winning results. If every movie in the series could be this good, I might just become a fan (they won't, I already know this).

While vacationing in Miami (after a quick, and amusing, mission in Cuba), Bond (Sean Connery still) is assigned to track and study Auric Goldfinger (Gert Frobe), a billionaire playboy with heavy investments in gold bullion (he really loves gold). MI6 thinks Goldfinger may be up to something so they send in Bond to find out what the presumed villain is up to. Bond, being Bond, pisses the villain off, leading to back and forth hostility as each man senses the other out, playing games over money before their animosity escalates.

And escalate it does, as Goldfinger kills a girl Bond likes (via skin suffocation through gold paint). Bond chases Goldfinger around the globe before getting caught and imprisoned at Goldfinger's Kentucky compound. That's not really a problem for Bond, though, as it lets him find out about Goldfinger's big plan up close. And it is a big plan, a scheme to irradiate much of the world's gold reserve at Fort Knox so that all of Goldfinger's own supply of gold skyrockets in value. As long as the villain can get away with it, he'll be richer than anyone on the planet, ever. Bond just has to stop the plan before the world's economy is destroyed.

What works best in Goldfinger is the interplay between Bond and the titular villain. I noted in From Russia with Love that the film really wanted SPECTRE Agent Red Grant to be a villain capable of taking on Bond, someone that could stand toe-to-toe with our hero, but the groundwork for his equality was never laid. That was a villain that was introduced and then ignored for most of the film so the necessary development wasn't given to his character. 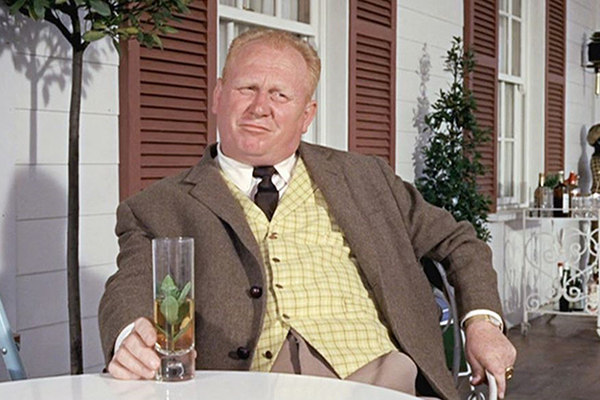 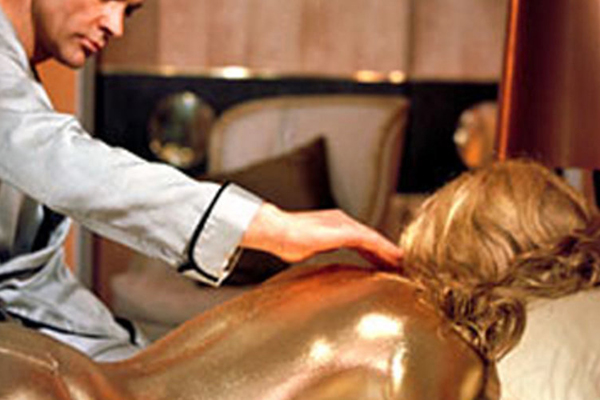 Goldfinger, though, gets all the necessary development to be a proper villain, one that really can take on Bond one-on-one. I don't mean that in a physical sense -- Goldfinger is kind of a dweeb, honestly, pudgy and soft -- but mentally. He's someone capable of playing at Bond's level, of anticipating movies and counter-punching each of Bond's attacks. Seeing the two of the mentally circle each other, trying to out-think their foe, playing the game of cat-and-mouse gives the movie it's drive and momentum.

When it comes to the physical work, the actual fights against Bond, we have Oddjob (Harold Sakata). A Korean man of few words (in the novel this is because of a cleft palate although the movie makes no explanation for it), Oddjob is the muscle of Goldfinger's operation. He's an imposing force, essentially invincible even though he's just a man. Plus, in a dorky move that's become iconic for its silliness as well as how darn cool it is, he throws a deadly hat. There's no development of Oddjob in the movie and yet, honestly, he's such a cool character.

And, of course, there's Pussy Galore. Her name alone made the character iconic -- and then parodied in delightfully silly fashion in Austin Powers by the character "Alotta Fagina" -- but Pussy (Honor Blackman) is also one of the most capable women we've seen in the series yet. A henchwoman for Goldfinger, Galore is the leader of a band of one-time trapeze artists who then became aviators (thus the name of their band "Pussy Galore's Flying Circus"). She's able to take on Bond physically, and even resist his charms (for a spell) before seeing the error of her ways and aiding Bond. She gets a real arc and has a direct impact on the proceedings (something most Bond Girls never get to do).

In most respects, then, this film really does hit all the beats it needs: a solid hero/villain dynamic with iconic characters and scenes. That said, not everything about the film works perfectly. The biggest flaw, of course, is that it hasn't aged well, especially when it comes to the big villain scheme. Goldfinger wants to become rich by destroying the world's gold reserve but, of course, we don't work on the gold standard anymore. Heck, gold, while still valuable, doesn't have the same kind of essential status it once did -- irradiating the world's reserves of gold might change the value of the bullion some but it's doubtful it would have that great an impact -- stocks and bonds are much more valuable to the overall world economy at this point. 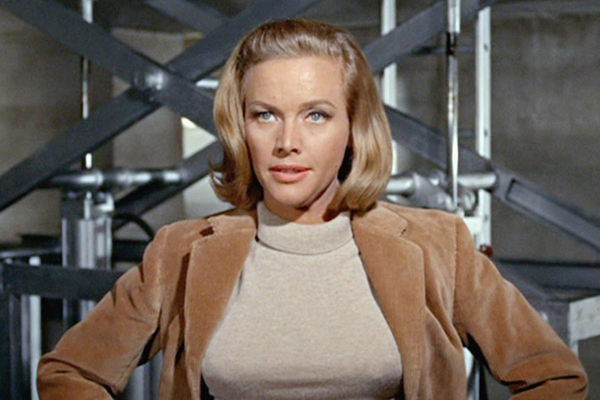 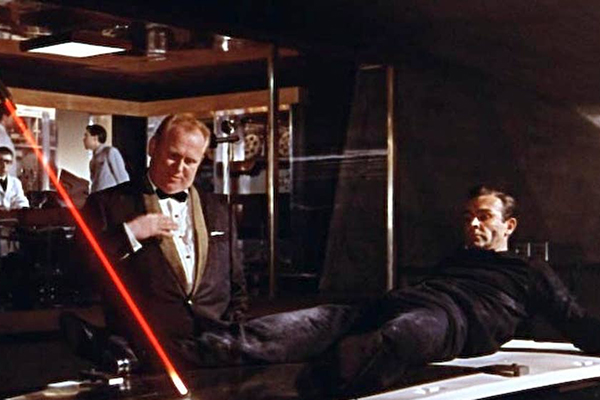 Plus, lets be frank, the villain still gives in to all the Bond-style cheese that is already beginning to bloat the film. He keeps Bond alive long after it's clear that killing the hero would be better for his overall plan. He goes out of his way to explain his plan to people even when he knows he's going to kill them (all so that Bond can learn all the details of what's about to happen). And, time and again, he's prone to fits of specifying when he should just get everything over with. Sure, it adds color to the character but it does reduce his effectiveness a fair bit.

And then, while I like Pussy Galore's character I have to admit that the film doesn't treat her that well past a certain point. There's a scene in a barn where Bond pushes her down and forces her to kiss him. She resists before finally realizing she likes it which is just... wrong. Bad. Don't do that, film. It's fine if she wants to give in to Bond's charms but don't make him force her to like it -- that's a bad male-centric fantasy that, even now in the 2020s, still lingers. And then, after this, Pussy is little more than the woman on his arm, reducing her character further. It's tragic.

Still, these flaws don't completely ruin the movie -- they're products of the era the film came out it as well as the fact that this is Bond and there was an attitude for his character (the villains, the women, the hero himself) that the films always used and followed. It's not perfect, and the film would be stronger with better plotting and handling of its key characters. But even with these flaws this is easily the best, and strongest, Bond film yet. Despite expecting to hate this movie, I found myself actually enjoying it, which is something I never thought I'd say about a film in this series.