Bond Versus the Winter Olympics

James Bond Eon Film #12: For Your Eyes Only

It's funny, really. After the fiasco that was Moonraker (and by "fiasco" I mean that from a storytelling stand point as the film was a financial success, which says nothing about the viewing standards of audiences in the 1970s), the James BondThe world's most famous secret agent, James Bond has starred not only in dozens of books but also one of the most famous, and certainly the longest running, film franchises of all time. films would have to do a lot to be sillier and less grounded. It's like the bar was set super low and just about any follow up could do better by comparison. For Your Eyes Only is not a good film, by any stretch, but in comparison to what came directly before, it so much better. 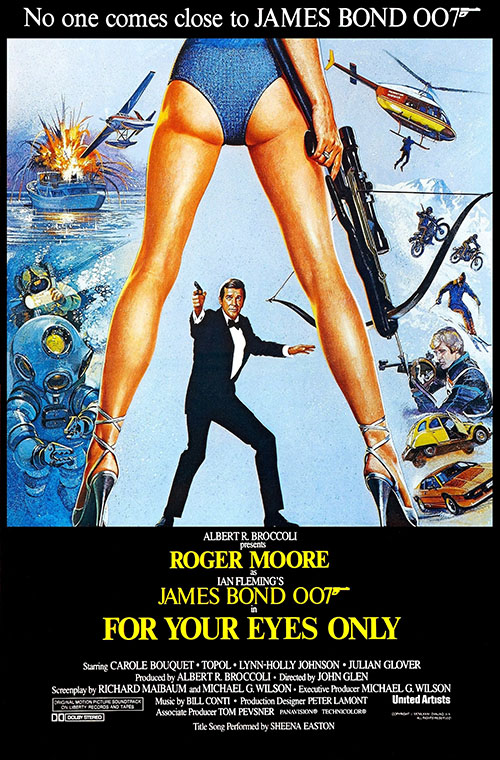 This is the struggle I have with the Bond films, really. Were I to watch any of them on their own I'd tune out pretty quickly (something I used to do when they came on TV back when I actually had cable). But for a project like this, going through each of the films in order, I don't have that kind of luxury; I'm trapped with these films so I have to find some kind of enjoyment where I can. I wouldn't say they're growing on me but I can at least admit that some films are better than other. For Your Eyes Only wouldn't make my list of top Bond films, but it's a damn sight better than Moonraker or You Only Live Twice.

After an intro where Bond kills Blofeld (something stitched in as an obvious dig at Kevin McClory, a co-writer on Thunderball, and the legal dispute around that film which led to McClory being allowed to make his own, SPECTER-centric film just a couple of years down the road), the movie then really gets going with the sinking of a British ship. That ship, the St. Georges, possessed the ATAC system the British Navy used to coordinate all submarines in the fleet. If that system were to fall into the wrong hands, it could spell doom for the Royal Navy.

Enter the wrong hands. Just about everyone is looking for the ATAC system, including the KGB, but one particular individual, the Dove (aka Milos Columbo, played by Chaim Topol), is apparently the mastermind of the salvage operation to retrieve the device. Bond has to gain assistance in tracking down the Dove, figuring out their plan, and stopping them. Except all is not as it seems as allies could become enemies, rivals could become friends, and a girl out for revenge could just be the key to solving the whole mystery.

After Moonraker the production team decides that For Your Eyes Only needed to be grounded, more realistic. Instead of sci-fi epics Bond needed to return to the Cold War thrillers it told in days of yore. And, I suppose, in a way this did succeed in making a more grounded movie if, by grounded, we mean Moore's Bond only has to infiltrate the Winter Olympics instead of outer space. I wouldn't say it's any more believable, but I guess we should be happy he didn't go to Mars or something. 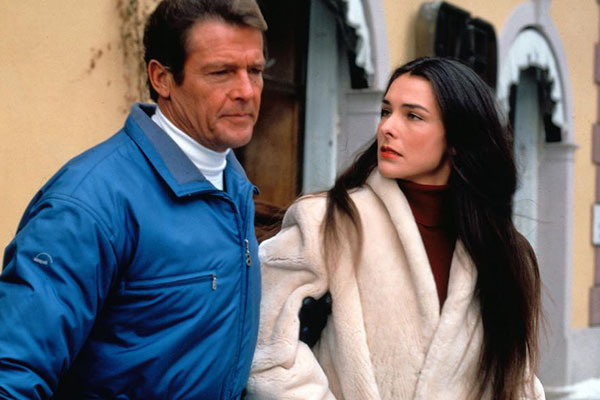 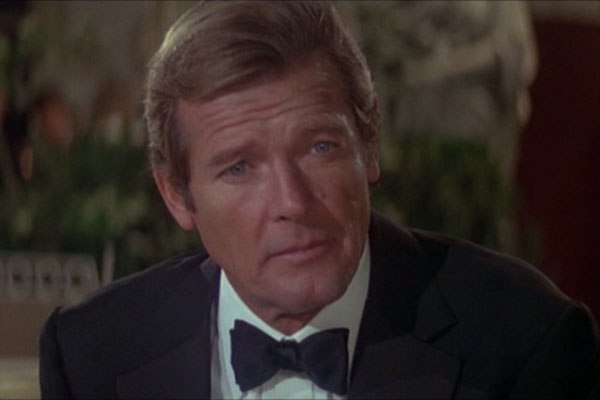 Considering that the film came out in 1981, a year after the last Olympics, stitching in a plot line about a skating hopeful (Bibi Dahl, played by Lynn-Holly Johnson) training for the next Olympics around the training village (where other events like the luge and the biathlon are also taking place) is frankly quite weird and silly. It's not timely, that's for sure, and a weird inclusion in the movie, that's for sure, especially when, because of it's addition in the story we end up with one of the biathletes also being an secret KGB agent sent to kill Bond (because that somehow makes sense) and yet another chase sequence on a luge track (as if the first time, in On Her Majesty’s Secret Service wasn't bad enough).

That said, the Olympics section of the film is also the most memorable as the rest of the film just kind of drags by without much activity or anything interesting going on. Sure, there's a decent attack on a Greek warehouse with some good action (including a solid car-and-foot chase at the end), but it all feels so weightless, a tad tedious. That includes a late-film double-cross from a supposed ally, Aristotle Kristatos (Julian Glover), a smuggler (supposedly turned legit) who secretly wants the ATAC system so he can sell it to the KGB for a big pay day. This twist might have meant something if we really knew Aristotle and cared about him in the slightest. It just goes back to what I've been saying, time and again: Bond really needs a villain that can command the screen; without that, the films just become silly, airless retreads. It's the villains that make these films and Aristotle Kristatos is not an effective heavy.

I do, however, appreciate the fact that the villain isn't plotting some big world domination scheme. He's not looking to create a vast ocean city or destroy the world with solar lasers. Instead he's just in it for the money and the only reason he wants to kill Bond is because the British agent is getting in the way of his pay day. As far as villain schemes are concerned, that's surprisingly grounded. It's the most realistic plot we've gotten yet in a Bond film, hands down.

Perhaps this film could have been more tolerable if there was anyone we could really care about in the film. Moore is, of course, his usual self -- he has the voice of a suave secret agent but not the charisma to go along with it. He's perfectly inoffensive but these films really need someone more charismatic at the helm and, every time I watch one of Moore's efforts I end up feeling like there's a void at the center of the piece. Moore has fun being dumb and silly in the role, when the movie calls for it, delivering dad jokes and one liners like it's no tomorrow. But when it comes to actually being a suave secret agent delivering out swift justice, Moore is just too stiff and awkward. And he still has yet to develop palpable chemistry with any of the leading ladies. 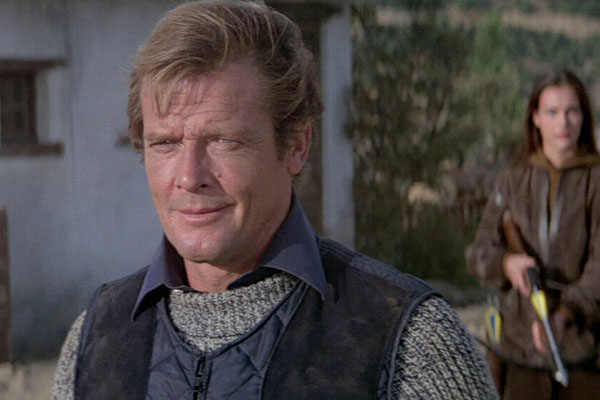 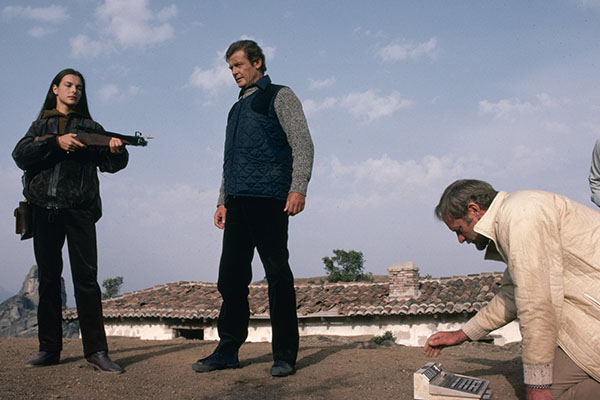 Not that the leading lady this time around is much to work with. Melina Havelock is sketched out as a woman set for revenge after her father (a secret agent searching for the wreck of the St. Georges) is assassinated. She wants her revenge and will kill anyone that gets in her way, or, at least, that's what she says. But in composure, emotion, and action, Melina just doesn't have what it takes. As played by Carole Bouquet, the Bond Girl is about as charismatic as a slab of concrete. She's a husk without a soul, talking about vengeance but never really feeling it. She doesn't bring anything to the role which gives Moore even less to work with than his normal anemic chemistry, meaning the whole central story (and romantic pairing) simply doesn't work.

Short of recasting this film I'm not sure what could have really saved it for me. The basic outline of the story is solid but all the details, from the silliness at the Olympic village to the barely sketched villains and horribly miscast actor, are just wrong. This isn't the worst Bond film, as I've noted, but that's only because the series has really swing for the fences in the past and knocked it out of the park when it comes to outlandish shittiness. For Your Eyes Only is a sedate, slow, inoffensive film that never really rises to the occasion. It may not be bad but it's certainly not good either. Not by a long shot. And, worst of all, it's just not memorable in the slightest. I'll say this for Moonraker: it was awful, but memorably so.