A New Bond for a New You

When Sean Connery finished up his run as James BondThe world's most famous secret agent, James Bond has starred not only in dozens of books but also one of the most famous, and certainly the longest running, film franchises of all time. with You Only Live Twice, the thought of continuing the series without their lead actor (a role for which he is still associated, even now) had to send production company EON films scrambling. How could they continue their ultra-lucrative series without the actor that held it all together? 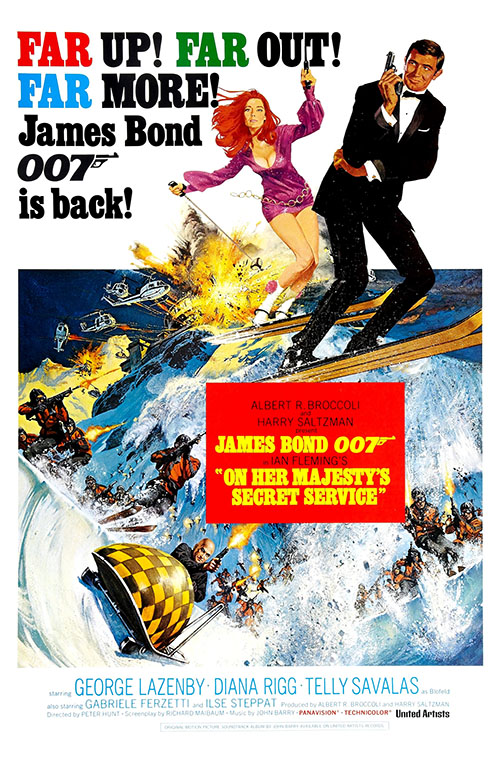 Think about it: the Bond films generally had a 100-fold return on investment, basically every time. That's like if the Marvel Cinematic UniverseWhen it first began in 2008 with a little film called Iron Man no one suspected the empire that would follow. Superhero movies in the past, especially those not featuring either Batman or Superman, were usually terrible. And yet, Iron Man would lead to a long series of successful films, launching the most successful cinema brand in history: the Marvel Cinematic Universe. films all managed to make $2 Billion-plus at the Box Office. Of course, that's not an entirely fair comparison as the Bond films started back before the great, multi-million dollar, Summer Blockbuster because the norm, so a 100-fold return on investment back then was $100 Mil and not in the Billions. Hell, most of the Bond films at the time had a budget that would basically cover one actor, or maybe just the craft services, for an MCU film.

Still, the EON Bond films were a license to print money back then, and suddenly they were left without an actor to carry the license to kill. After reviewing a number of actors, and trying to decide how to fit this new person into the old role (should they use plastic surgery to explain it?), they cast George Lazenby, an Australian actor best known for some commercials at the time, and gave him the keys to their multi-million dollar franchise. And, despite what fans today might say, the film was a success (both financially and, over time, in terms of respect from the populace).

On Her Majesty's Secret Service follow Bond (Lazenby) as he tracks down Blofeld (Telly Savalas this time around), the evil leader of SPECTRE. Blofeld, it seems, is plotting some new scheme to bring the world to its knees but, at the same time, he's also trying to present himself as a legitimate business man and European noble. He's laid a claim as the Count Balthazar de Bleuchamp and desperately wants to role to legitimize himself and get the agents of MI6 off his back. This presents Bond to opportunity to infiltrate Blofeld's operations, pretending to be an agent of the London College of Arms, so he can meet with Blofeld and see with the evil genius is really up to.

Meanwhile, Bond also has a hot new lady he's pursuing, the Contessa Teresa "Tracy" di Vicenzo (Diana Rigg), a woman equal in style and fearlessness to Bond himself. After an initial meeting between the two (with Bond saving the woman from committing suicide... maybe) before getting attacked by goons left, right, and center, Bond eventually falls into a whirlwind relationship with the Contessa. Sparks fly, but it's not until she ends up saving him from SPECTRE goons (repaying the debt he setup in the first reel of the film) that Bond realizes how much he truly cares about her. Soon, Bond is proposing marriage, but they have to survive the schemes of Blofeld, and foil the plot to end the world, if they're to find their happily ever after. 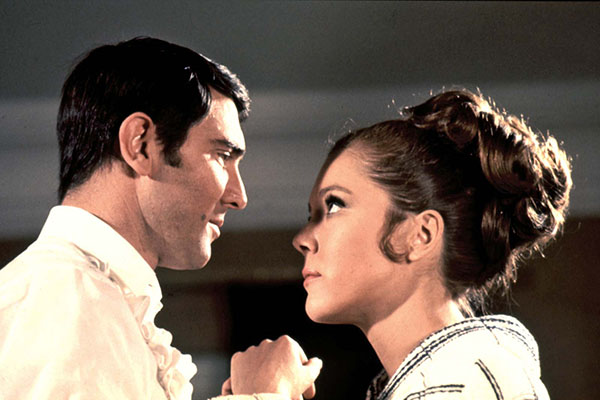 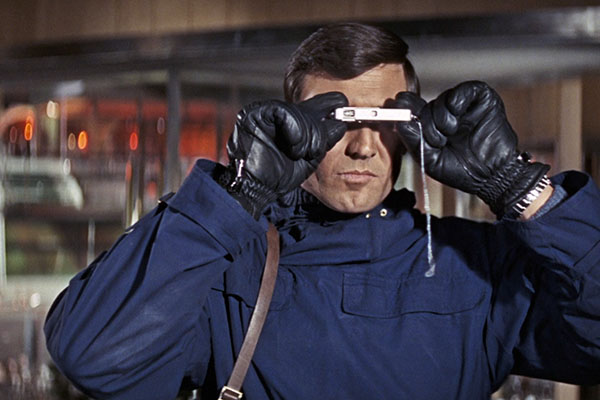 I know Lazenby isn't a very well-loved Bond -- most fans rate him as the lowest of all the Bonds in the canon -- but I have to admit that I actually rather liked him. It's true, he's no Sean Connery, but I don't necessarily think that's a bad thing. Connery did have a quiet cool, always the suavest mo-fo in the room, no question. But there always seemed to be a sinister side to him as well, a little too comfortable slapping women around, acting condescending to them, being an alpha-male douche. His big, swaggering dick could be seen for miles, and maybe that worked for Bond fans, fueling their male ego fantasies, but I got tired of that shtick real quick.

Lazenby, though, brings a different style to Bond. He's a little more nebbish, a touch nerdier, yes, but he still convincingly comes across as a well-trained, cool-to-a-fault secret agent. He quickly falls into the role of Bond, taking on the lead character and making it his own. I honestly think it's a pity the actor left the role after just a single film (a decision that was his choice, at the advice of his agent, and not that he was forced out of the role as some rumors stated, as EON originally offered him a seven picture deal to continue in the role) -- IU would have really enjoyed seeing where he could have taken this character and the evolution he could have given to the role.

What really helps this movie, though, is Rigg as Bond's love interest, Tracy. Rigg, a fine actress who played Emma Peel in the British Avengers (as well as, more recently, Lady Olenna "Take No Shit" Tyrell on Game of Thrones) plays a "Bond Girl" who really is equal is style and attitude to James. Rigg makes her character into an awesome, take-no-shit kind of lady, one who sees through Bond's own bullshit and finds the person worth investing in underneath. She knows who she's getting in bed with (literally and figuratively), but she also realizes she has to be her own person as well if she's gonna find true happiness.

The weak link of the film, certainly, is Telly Savalas as Blofeld. The character, first seen as more than just an arm stroking a cat back in the previous film, was played with delicious malice by Donald Pleasence and shaped into a dark, evil, charismatic force who seemed equal to Bond in his own twisted, perverted way. Here, though, Savalas brings done of that evil energy to the role, reducing the character down to just another silly Bond villain, a fiend-of-the-week if you will. He doesn't feel like an equal to Bond, nor a serious threat to anyone, let alone the whole world. 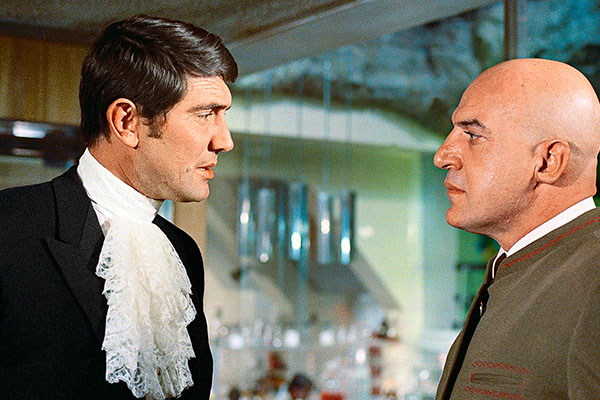 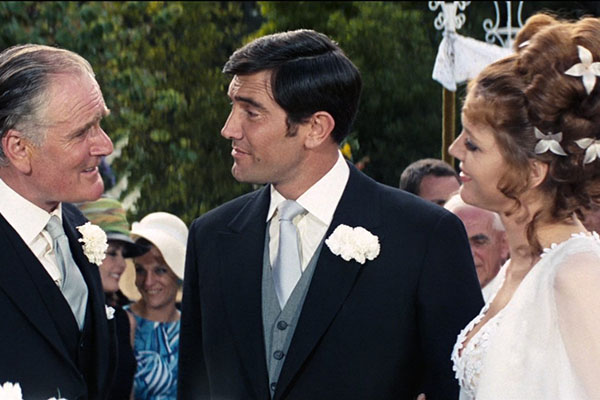 Plus, honestly, the film just falls apart in general any time it tries to bring the movie around to the SPECTRE plot. Without a strong heavy in the lead role (or any acknowledgment in the plot that Bond and Blofeld have a history at this point, something the movie pointedly ignores), SPECTRE once again has to stand on its own and, frankly, this whole organization makes no sense and is just silly. An evil organization that's equal in power and resources to MI6 sounds great on paper but the films have yet to do the legwork to show us how that could work or why SPECTRE needs to be taken seriously.

And then we come to the end of the film which has a real downer of an ending (and, of course, spoilers for a 50-year-old movie). James and Tracy get married and then, right before the credits rolls, as the two are driving off to their happy ending, Blofeld pulls a drive by, killing Tracy. Considering all the build up for their two of them and their relationship, this is quite a jarring rug-pull, a shitty way to end the film considering how awesome Rigg was in the role and who well the two characters worked together. I understand that Bond has to be the playboy secret agent, a woman in every port and a sex every night, and having a wife at home (or on the road with him, which could have been interesting) would have put a real crimp in that lifestyle, but maybe it was time for Bond to grow up and explore a new avenue in his life.

The plan, as per EON, had been to save Tracy's death until the next film but when Lazenby pulled out of doing any further movies as Bond, they decided to take this downer sequence on to the end of the film. I think if they'd killed Tracy at the start of the next film, essentially shoving her into the Fridge, that would have been even worse, reducing a strong character (and a potential intriguing storyline for the future of Bond) to little more than motivation for Bond on a revenge plot line, it still sucks that the character wasn't slated to live on, either way, beyond this film. She was great and Rigg was great in the role.

There's a timeline somewhere with Lazenby in the lead role and EON realizing Tracy needed to live on as well -- this film is enjoyable because of the two of them and their charismatic interplay. I wish we had that timeline instead of going back to Connery in the next film (where he was paid a ton of money to lure him back for one more go round). That future of the series sound so much more interesting than where we're going next...