I noted in my review of Season 1 of Game of Thrones that the show was less a fantasy series than a courtly drama set against a fictional universe. The emphasis on the show, where it got its energy and drama, was through courtly intrigue. Sure, there were some fantastical elements -- the hint of zombies here, the end-season reveal of dragons there -- but the main story of the show was focused on Ned Stark (Sean Bean) and his attempts at navigating the court of the the Red Keep. And then the King dies, and soon after Ned loses his head, and then the show gets off to the races. The first season ends with a lot of potential, the promise of more action to come, but its definitely a very different show from where the series ends up down the road. 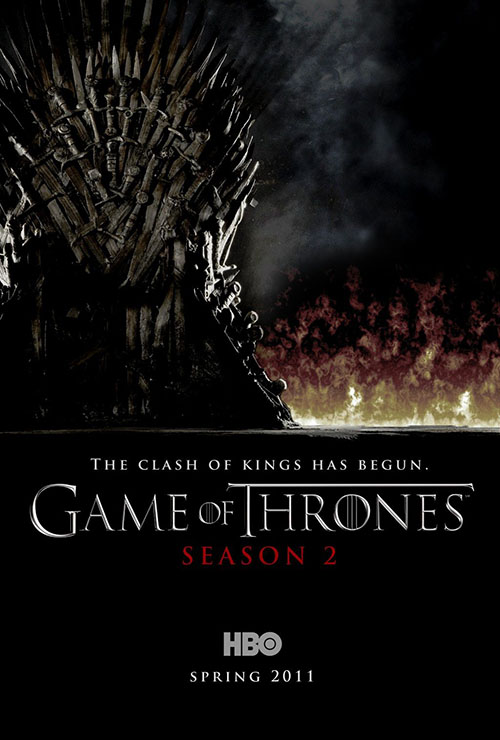 Part of that, naturally, is due to budget. For the first couple of seasons HBO didn't give Game of Thrones the budget to do a lot of big, sweeping set-pieces -- what budget they did have had to go to making all the sets, the costumes, and the like. As the series progressed, though, and more stuff could get reused, the series started to find more budget for the big action sequences. Compare first season, where we're only told about Robb Stark's great victories over the Lannisters, to season two where we actually get to see the Battle of Blackwater Bay, with Tyrion leading a group of men on the wall against invading forces, and boats, lead by Stannis Baratheon. Even that battle is still small in comparison to what would come down the road, but it showed that the series could do sweeping, action-oriented sections. It fulfilled the hope and potential fans of the books had for the series.

That's a major theme of season two: fulfilling potential. In most every regard the show starts to pay off even the small ideas it planted in the previous season. With the second season getting into swing, the Seven Kingdoms of Westeros fracture, split between the wants and desires of five kings. There's Joffrey Baratheon (Jack Gleeson), the bastard son of Cercei (Lena Headey) and her twin brother Jamie (the Kingslayer, played by Nikolaj Coster-Waldau). There's Robb Stark (Richard Madden), proclaimed King of the North, who wants nothing more than to protect his homeland and avenge his father. There are the two brothers of Robert Baratheon, Stannis (Stephen Dillane) of the island keep Storm's End, and Renly (Gethin Anthony), the younger but more popular brother. And then there's Mance Rayder, the king beyond the wall at the north, who has gathered together the various tribes of Wildlings and is preparing to send his armies down south.

Of course, as the season evolves those are the only rulers bucking for attention. Balon Greyjoy (Patrick Malahide) rules the Iron Islands and he has a rather large grievance with the Starks in Winterfell. Proclaiming himself another king (which doesn't up our total count as at least one king dies this season), he looks to take over portions of the north and make the Starks pay. And then there's Daenerys Targaryen (Emilia Clarke), last heir of the Targaryen family, claimant to the throne of Westeros, Kahleesi of her own band of warrior riders, and the Mother of Dragons. She has her own problems over in Essos but she still plans to one day come west and lay siege to the land until she gets what's hers.

As with season one, the second season of the show has a lot of different pieces all moving at once. Sometimes this works well, as some characters (like the ever fantastic Tyrion, still played by Peter Dinklage) get a lot to do and we really get to focus on their lives and actions. Other times, though, characters that seem like they should be important don't have nearly as much to do at all. It can feel like some plot lines get mired in quicksand while other pieces are moved around to catch up. 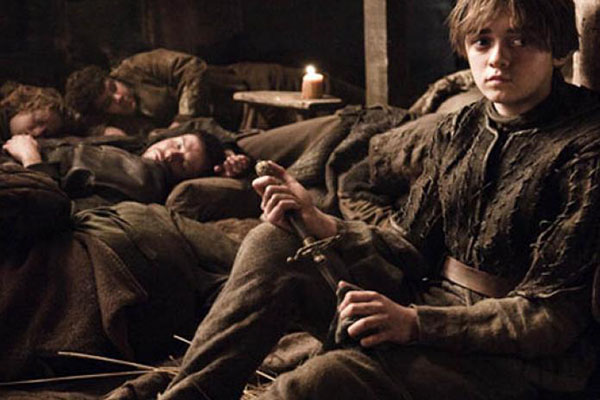 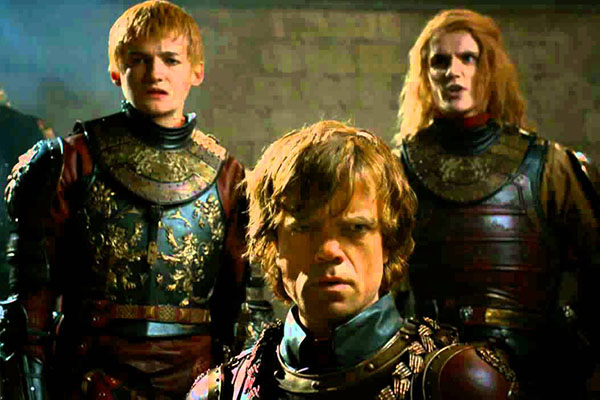 Of course, this is in part just the difficulty of adapting books to a television series. Although converting long-form literature into long-form visual media is certainly easier than trying to adapt it into, say, a movie, it does still require compromises. Daenerys, for example, is left literally wandering in the desert for weeks in the show until, near the end of the season, her plot line finally picks up and a good portion of the finale is devoted to her story, her struggles.

Robb Stark is another character under served by the season -- a character that should be fighting battles and struggling to lead a rebellion, most of his story is held off the battlefield. Instead of a story of war, he's largely committed to a love story. And while it's a pretty good story, and there's solid chemistry between the leads, it doesn't feel like it propels Robb forward in any meaningful way, not this season at least.

On the flip-side, some characters get a lot of screen time and plenty of plot line to push themselves forward. Tyrion is the big winner this season (not just because Peter Dinklage is a treat in the role), becoming the de facto hand of the king and overseer of Westeros. This includes keeping the Red Keep safe, dealing with political rivals, and preparing for a war with (potentially) multiple kings knocking at his door. It's a lot for any character to deal with, but Tyrion is handled so well that you realize he has a mind singularly made for the task at hand. If anyone deserves to be Hand of the King, now or in the future, it would be Tyrion.

A number of smaller characters also get to propel themselves forward as well. Arya (Maisie Williams), the youngest daughter of Ned Stark, is on the run from the forces against her family. We see her get captured by people who don't really know who she is), make allies, learn about the world, and become a tougher, stronger character in the process. Brienne of Tarth (Gwendoline Christie) is introduced in this season and, in some ways, she's a great parallel to Arya (despite being an easy two-plus feet taller). Like the littler Arya, Brienne is a tomboy who never had much need to be a proper lady, instead picking up a sword and fighting her what she believes in. She comes in early this season and quickly grows into a nuanced, interesting character with her own motivations and goals. 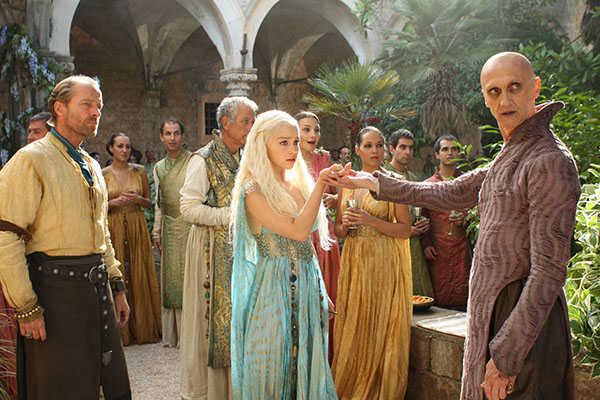 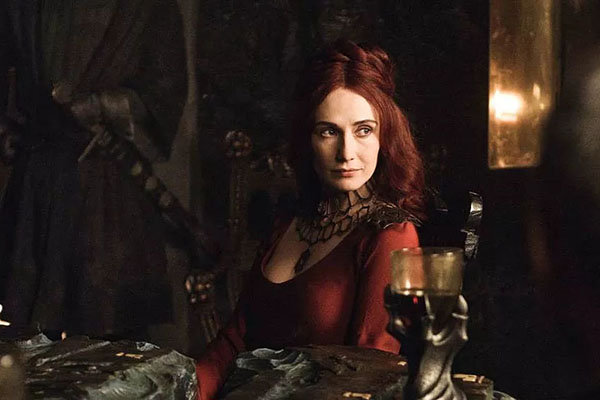 The strength of Game of Thrones, I'd argue, is in the characters and not the shocking moments, although the show certainly has plenty of the latter. Shocking twists and turns can only take you so far, but the show has to invest in its characters to keep audiences coming back. The focus on a few of the really interesting characters helps the show find momentum despite killing its biggest character (and named actor), Ned Stark at the end of first season. In the aftermath that's where the real heroes of the series have risen, and the show is stronger for it.

Of course, fans of shocking moments need not worry. While this season might not have had the big thrills you'd expect after Ned was killed, that will change soon. Third season has some big, horrible surprises coming, and before too long the whole direction of the show will change. Season two is a solid season, one that really gets a core of characters all moving along their future paths, but there's still some major changes to come before we see where Game of Thrones is truly headed. For all the strengths of this season, it's still very much a transitional part of the overall story.

Renly Baratheon, the proclaimed king with the strongest chance of dispatching the Lannisters and winning the war. He's killed a shadowy demon sent to his tent by his brother Stannis and the Red Witch.

The Battle at Blackwater bay has the biggest, most over-the-top moment, to be sure. Tyrion's plans to take out Stannis's navy leads to a fiery explosion and lots of screaming and death. It's a big moment for the show right in the middle of it's biggest battle set-piece yet.

Well, I want to say Tyrion because he's always great, but I think I'm going to give the edge to Tyrion's faithful mercenary companion, Bronn (Jerome Flynn). This warrior is just awesome, a guy that doesn't give a crap most of the time and is always ready with a quip (and his sword). He's a fun, charismatic character who regularly steals scene, even scenes featuring Tyrion.