Mired in Mud and Snow

Heading in to season three of Game of Thrones, the key thing to note is that the countryside is in a state of armistice. The wars that marked the second season are still there, still poised to rage on, but everything is left stagnant, on the precipice of the next big move if someone just slips up or one side can get the better of the other. So instead of a lot of big battles for the season, we get a lot more back biting, petty battles, and more focus on the horrors waiting within the hearts of men. 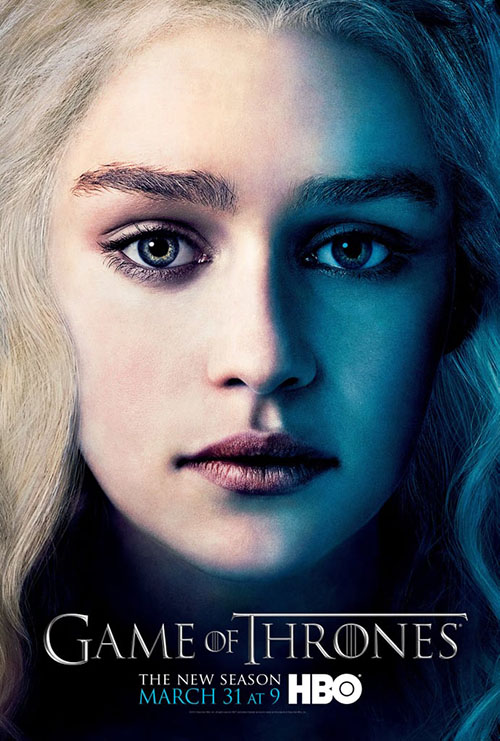 For those hoping for the constantly ramping up action that season two seemed to promise will just have to wait for a while. Although there are a few big sequences (most notably a rather stark turn for the war in episode nine that wraps into episode 10), much of this season is slower, taking it's time to develop the remaining character further and pushing them towards their end-goals (whatever those might be). It's not a fast-paced season which might annoy some, but there's still plenty to enjoy if, by this point, you're hooked on the characters.

The primary stories told this season focus on a few specific characters. Tyrion, still at the Red Keep, was demoted from Hand of the King at the end of last season, but soon after he's made the Master of Coin (the man in charge of the kingdom's finances). Unfortunately for him, and for Sansa Stark (young daughter of the Stark clan and hostage held by the Lannisters since the war started), the two are forced into an arranged marriage, one neither of them wanted at all. On the subject of marriages, Robb Stark, King of the North, is suffering from his decision to marry the woman he loved last season instead of taking the promised arranged marriage with one of Walter Frey's daughters. Frey controls the Twins, a massive fort that stretches across the great river that bisects Westeros, and Robb needs Frey on his side to conquer any further into the countryside. Between this, and a few other decisions that cost him the support of his men, Robb is stuck in a dire place, unable to move his armies forward or back.

Meanwhile, Arya wants nothing more than to get back to her family. Although she knows that Robb and their mother, Catelyn, are on the battlefield, Arya keeps running into trouble getting to them. One way or another she gets capture by random groups and held has a hostage they'll use to bleed money out of the Starks. She wants nothing more than to kill them all and run off, but she still doesn't have the technical skill to pull it of... yet. And, of course, no one is able to return to Winterfell because that fortress is in ruins after Theon Greyjoy sacked the place last season. He was left for dead by his men (because he was a terrible leader) which just puts him in the hands of the Boltons. Taken back to their fortress, Theon is subjected to all kinds of tortures at the hands of his captors simply because they can, eventually leaving him a broken man.

These are men from the same clan, it should be noted, that also managed to recapture Jamie Lannister and, because they could, cut off his hand for the fun of it. They aren't nice people, and that darkness is quickly spreading across the countryside. In fact, the only place where the darkness isn't spreading is in Essos where Daenerys, Kahleesi and Mother of Dragons (among several dozen titles she's racked up) is slowly moving across the country, taking over cities and freeing slaves. As Westeros descends into ruins, we start to see the spark in Essos of someone that could unite the world... or destroy it with her dragons. 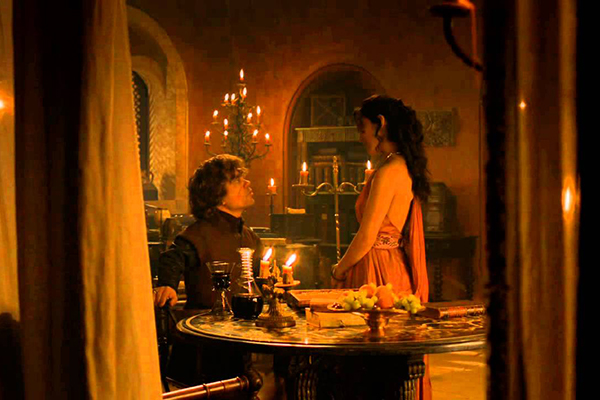 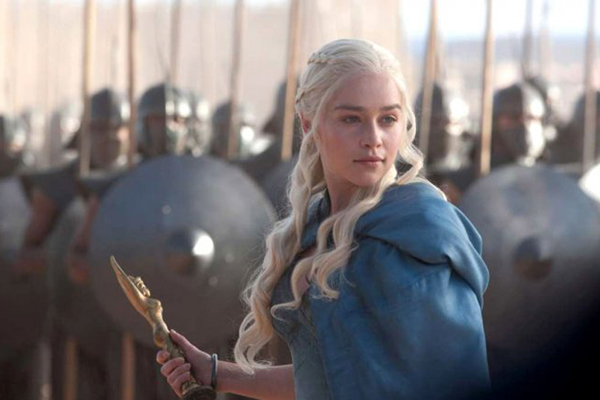 One of the things this season really highlights is the darkness lurking right under the surface of all men. Invariably, given a chance to do right or do wrong, the character on the show choose the darker path (or are screwed over when someone else takes it and back-stabs them in the process). The north fell after Robb took his armies and marched south, and then one group after another has taken Winterfell and done terrible things there. Without the guiding presence of Nedd Stark, the lord all descend on each other, making the north no better than the south, really.

As far as Westeros is concerned, nothing is really build. Alliances are tested, or torn asunder, and everything that seems stable slowly devolves into chaos. This is made clear by the end of the season when another of the would-be-kings dies in a truly gory fashion, and the world gets a little darker, a little less hopeful. It doesn't matter if you're a good man or a bad on, the Game of Thrones grinds them all down.

That's what makes the Essos sections so compelling this time around. In every respect it's the total opposite of the events happening over in Westeros. There a queen, not a king, is slowly making her play for the Iron Throne back west. She's doing it not by tearing men down but by building it up. In her own words she can't be the kind of person to let slaves stay enslaved or turn a blind eye to suffering; if that's the kind of ruler she'd be then she's not worthy of the throne. Even in filming style, the Essos section stands in contrast, full of bright, rich colors instead of the dull grey, desaturated tone of Westeros. It's like Daenerys is the light to shine upon the world, although knowing how this series works maybe we shouldn't bank on that for too long.

Really, if any part of the season hold the show back, it's the events in the lands close to, and above, the wall. Here we have Jon Snow, stranded there last season, merging with a pack of wildlings as a means to get back home while, on the other side of the wall, Bran Stark seeks to travel northward so he can get mysterious training from a "three-eyed raven". In both cases a lot of screen time is devoted to the characters but neither side really does much. By the end of it Bran makes it to one side of the wall while Jon makes it to the other, but it doesn't seem like anything is learned or, really, that we even needed to watch these journeys. 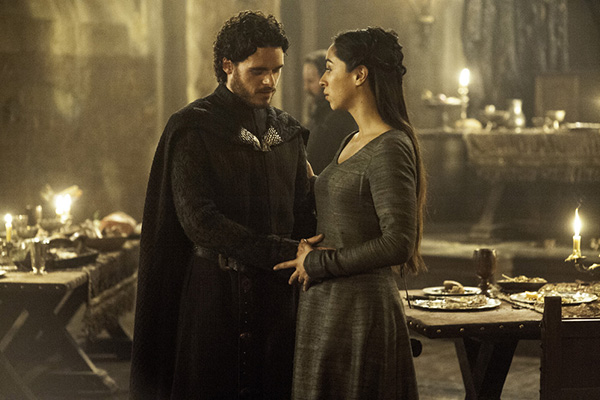 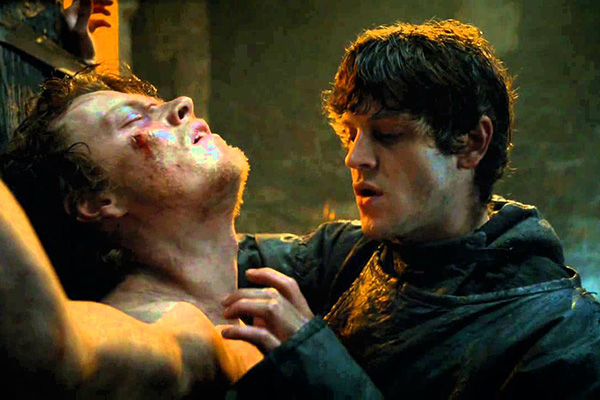 I do understand that each character highlighted in the show will, eventually, have something to do that related to the end-game of the series. We have to be reminded of them once in a while so we don't completely forget these characters exist. Still, there had to be more interesting things to do with some of these people than, in effect, watching them go through a year of walking.

While I was watching it I enjoyed season three, but honestly once it ended I struggled to remember much of what happened. There were horrible moments that stood out, but on the whole it didn't feel like the show progressed much. If an entire season of television can be table setting, then that term perfectly describes season three of Game of Thrones.

Well if you're reading this then you're ready for spoilers, and this is a big one: Robb Stark, along with his wife and mother, are slaughtered by the Freys and the Boltons during a wedding at the Twins. This event is called the "Red Wedding" and is talked about by fans of the series. It's shocking nothing for how gory it is but also because it happens so suddenly and takes what many thought was the key player for the end game of the series, Robb Stark, out of the equation.

While some would argue that the Red Wedding is the most shocking event this season, I debate that. Really, Robb wasn't making any progress with his plot line, effectively sitting in a single camp for an entire season, making love to his wife. He was way too happy so it should have come as no surprise that he wasn't long for this world.

Instead, the most shocking moment, simply due to its depravity, is the mutilation of Theon Greyjoy by Bolton bastard son, Ramsay Snow. The suffering the character goes through, over and over, is terrible. Worse, though, is the final event, where Ramsay cuts off Theon's genitals, that really caps the sickness in the bastard's mind. And the fact that he does it all simply because he can make it all the worse.

Honestly Tyrion doesn't get a much to do this season as he did in the past. While he's still great, this time we're giving the award to Daenerys. Her journey across Essos, becoming a great queen, a master tactician, and the "breaker of chains" as she frees slaves from city to city, shows that she just might be the one ruler Westeros really deserves.