Okay, wow, I did not expect the James BondThe world's most famous secret agent, James Bond has starred not only in dozens of books but also one of the most famous, and certainly the longest running, film franchises of all time. films to get so bad so quickly. Generally, when a film series is forced to go in a new direction for whatever reason (such as the recasting of the main lead), you expect things to get a bit of a refresh. Yes, the lead actor might need a little time to get settled into the role, but at the same time the new lead allows the creative team to try and find a new angle on the material, to refresh their viewpoint and maybe try something new with the series. We saw it with George Lazenby and his honestly quite good On Her Majesty’s Secret Service, so maybe it was just wishful thinking that the same could happen again when Roger Moore took over the role in Live and Let Die. 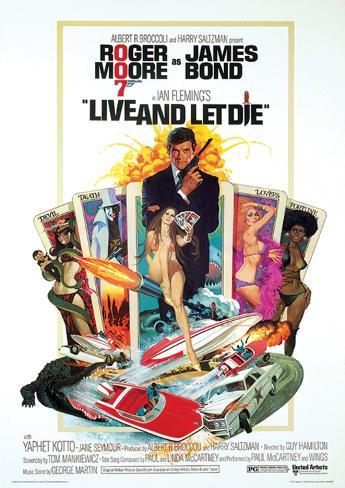 I recognize that popular opinion is that the later Roger Moore films are pretty wretched (once the actor had been in the part for too long and was way too old to play a young and vibrant secret agent/playboy), but I assumed they had to start somewhere decent before dropping off. Clearly I was wrong as Live and Let Die is one of the worst films I've seen in the series yet (and it's not like there haven't been some stinkers, such as From Russia with Love and, more recently, Diamonds Are Forever). What the hell happened?

Well, okay, watching the movie you can easily tell what happened: the producers clearly wanted to assure fans that the change in actors wouldn't lead to a drastically different kind of Bond movie so the adventure we received this time slots neatly into the Connery-style canon. It's easy, in fact, to see how this film could have been written for Connery and Moore was just slotted in when it was clear the Scottish actor couldn't be lured back to the role no matter what. That would explain how we got such a tired, flabby, misogynistic adventure for the world's most famous secret agent -- just another day in the life of James Bond.

This particular adventure sees Bond traveling off to America (once again -- when is the British agent going to have a quest in Britain?) after three British agents are killed in the U.S. and the Caribbean. Immediately he's embroiled in a street battle with Harlem gangsters, which puts him on the scent of Caribbean. power broker Dr. Kananga (Yaphet Kotto), as well as his U.S. street-leader, "Mr. Big". Soon, Bond is having to travel to New Orleans and the Caribbean. to figure out what Kananga and Big are both up to.

That's when he discovers the real plot: a scheme to grow and create tons of heroin that Mr. Big will release, for free, into the U.S. to crash the heroin trade and create a vacuum that Kananga can take over and fill with his exclusive heroin. Get the people of the U.S. hooked on the good stuff and suddenly he'd rule the country... and then the world. You know, standard megalomaniac stuff, just with a tinge of Blaxploitation plotting (the drug trade) thrown in. 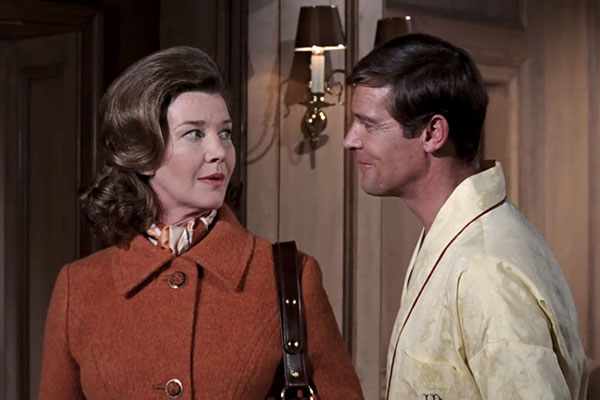 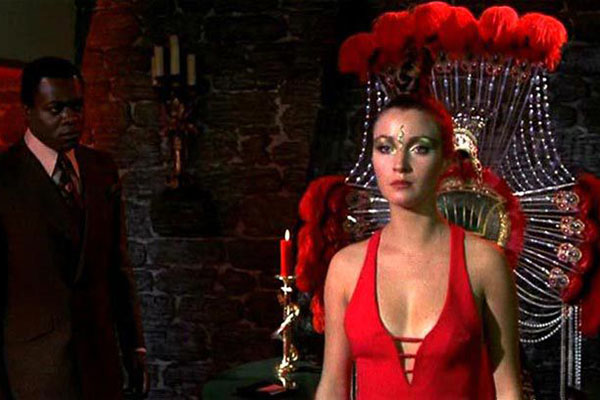 As we saw before, with You Only Live Twice and it's reliance on the popular-at-the-time martial arts tropes, the Bond series was not above cultural appropriation if the producers thought it would get butts in seats. Here, the film is playing in the Blaxploitation genre, which, to its credit, did mean that this is the first Bond film with a predominantly black cast. That is the only thing about it, though, that we should credit to Live and Let Die.

The film is, quite frankly, the most racist film in the series yet (and yes, that does include Bond in yellow-face for You Only Live Twice). While it might play in the Blaxploitation genre, it very much doesn't understand the conventions of that genre. For starters, the white person is not supposed to be the hero, but Bond, of course, has to be the hero. This could have been mitigated some if the Bond Girl this time around had been black and was a predominant character in the film. One of the two Bond Girls is black, Rosie Carver played by Gloria Henry, but she turns out to be a double agent and is then killed off quickly. The real Bond Girl is Solitaire (Jane Seymour, in her first major role, making her "Doctor Quinn, Medicine Intern" I guess), Kananga's psychic. Solitaire gets the meaty role, she gets to hang around for most of the flick, and survive til the end. And, of course, she's white as snow.

Having any of the black characters in the film be part of the heroic side would have probably helped (instead of having the white CIA agent, Felix Leiter, show up again to run the operation). Then we wouldn't have a film where every black character was a villain (as we do here). But it's not just that they're villains that's part of the problem, but more that they're racial caricatures, tropes taken all the way to 11 before being unleashed on screen. Harlem can just be Harlem, it has to be filled with over-the-top characters in fur, with a pimp mobile on every corner. You can't just have a story set in Harlem about the drug trade, either; it also has to hit New Orleans, for the voodoos, and then the Caribbean as well. It's like every bad black stereotype set in every black location at once, as if the producers were going down a list and checking each and every trope off, one by one.

It's not like the producers had a clue what any of it meant. Solitaire is a psychic who foretells the future via Tarot cards, but, naturally, the cards she reads have nothing to do with the meaning she bestows upon them (the Death card, for instance, doesn't literally mean someone is going to die despite what you might learn from Live and Let Die). Solitaire, it should be noted, is only able to see the future because she is a virgin; once she has sex (which, of course, she's going to the second she meets James Bond) she loses her power. I don't know if you've ever met someone that read Tarot, but I have known a few and whatever skill they have with the cards doesn't come from how well-sexed they might have been at the time. 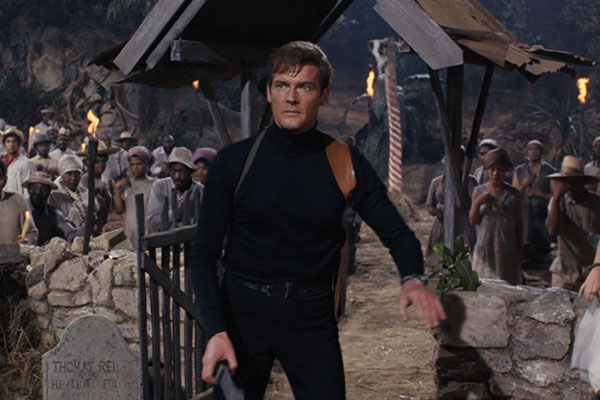 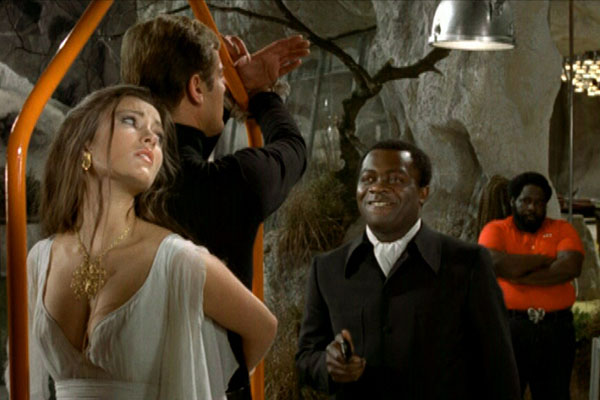 Of course, what Tarot has to do with Voodoo is not explained in the film (and, reading up on all the associated practices, such as the Obeah, there really isn't any connection). But, since we have voodoo practitioners in here, that means we have to have an over-the-top ceremony where someone is nearly sacrificed, where snakes are worshiped, and where a zombie is raised. Like, seriously, what the hell were these people thinking. This is just a hilariously awful collection of ideas without any sense of purpose or reality.

Even if we can somehow divorce ourselves from the terrible racial politics of the film, chalking it all up (once again) to a white male power fantasy (which is all James Bond really is, frankly), the fact of the matter is that Live and Let Die is just a tedious affair. The plot takes forever to get going, with Bond randomly wandering from place to place with little reason or bearing. Once the action picks up it's pretty bland owing largely to the fact that Roger Moore didn't really have the physicality to handle the stunts required (but then, neither did Connery, honestly). Even the few big sequences, like a massive boat chase near the end of the film, are betrayed by terrible editing and pacing. Seriously, the boat chase should be a really show-stopper but, for whatever reason, the film keeps cutting away from it to some yokel sheriff no one cares about, yelling about catching up to Bond so he can throw him in jail. It's... well, it's just hard to watch.

About the only saving grace is that, in his first time in the role, Moore at least acquits himself well when it comes to playing the aloof, cool-as-a-cucumber aspects of Bond's persona. He's not a great fighter, he relies on bad one-liners way too much, and frankly he has no sex appeal, but when it comes to believing he might just be a secret agent that can handle himself under pressure, Moore does a respectable job. And that's about it.

Watching Live and Let Die I had to wonder why people flocked to this film. What was it that drew them in droves and made this film a smash success (clearly $161.8 Mil at the Box Office off a $7 Mil budget)? If I were watching these films one at a time without any knowledge that there were more films in the series, I would have thought this would be the end of Bond. Live and Let Die is so bad that it should have killed the franchise, a jump the shark moment (or, in the context of this film, jump the gator, which Bond does indeed do here) that should have sent the series packing for a decade before someone else tried to reboot it. And yet, instead, it was a massive success that spawned another six Roger Moore films. Why?! Hopefully, over the course of those films, I find an answer that justifies it because, right now, I'm just not seeing it.