Shaken, and then Stirred, with a Twist

As a film buff I tend to feel a responsibility to see anything that has entered the pop culture pantheon. If a series becomes big enough, popular enough, and/or runs for long enough I feel a need to at least sample the series. That's how I got into the now long-running The Fast and the FuriousStarted as a film about undercover policing in the illegal street-racing community, this series has grown to encompass a number of different genres and become one of the most bankable franchises in the world. franchise, why I sat through all the (terrible) Friday the 13thOne of the most famous Slasher film franchises, the Friday the 13th series saw multiple twists and turn before finally settling on the formula everyone knows and loves: Jason Voorhees killing campers 'round Camp Crystal Lake. movies -- they were a part of the pop culture landscape, required viewing for anyone that wanted to experience all that cinema had to offer. 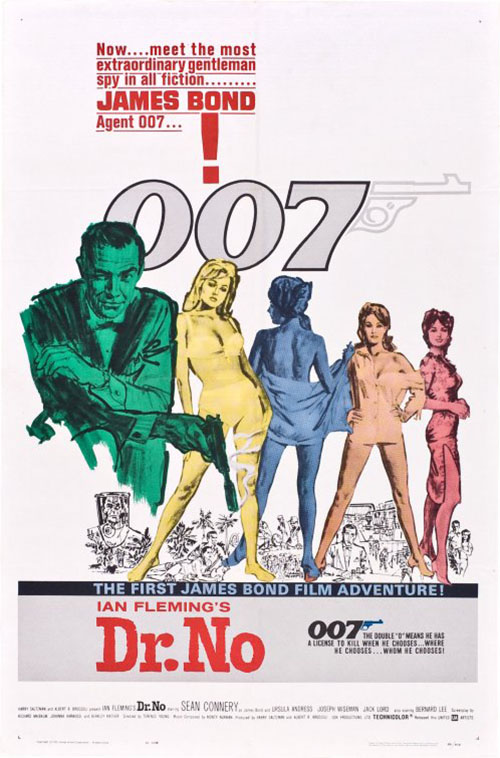 And yet I have to admit I've never been able to get into the James Bond movies. There's always been something missing from then whenever I made an attempt, a certain energy or substance that kept the movies from resonating with me the same way other espionage films, like the Bourne flicks or the Mission: ImpossibleIntroduced in 1966, the original Mission: Impossible featured a team of agents (with varying skills) heading out into the field to solve puzzle-box like cases on a weekly basis. This simple concept spawned a long-running series, a second series in the 1980s, and a hugely successful movie franchise starring Tom Cruise that continues today. movies, could manage. They always seemed to old, so hokey, not even "Dad Films" but all the way to "Grandpa Movies". They had an air about them, as if to say, "when I was your age our spies were slow, and silly, and we liked it fine that way!" This might have been aided by the Roger Moore films, which used to play regularly on TBS, and Roger Moore is the opposite of "cool".

Hell, the closest I've ever gotten to actually enjoying this franchise was in 007 Nightfire, a 3D shooting game in the vein of Goldeneye which, admittedly, didn't have the grace of that game but still had hella-fun multi-player. Also, the Daniel Craig movies are decent (if increasingly flabby and silly). On the whole, though, James Bond has been a character I could live without.

It seemed to me, then, that the only way to give James Bond the fair shake he deserved was to go back to the beginning of the series and sit through it all, to really get a sense of what really goes into a "Bond, James Bond" movie. And, if the first official film in the series (and, looking at the information I can find about it, first Bond film ever), Dr. No, my first opinion was right: the James Bond films are deeply silly, and all the issues I had with these movies started in the very first flick.

The film does begin decently enough, to be fair. The film takes its time introducing it's character, starting not with Bond but with the crime that he's going to investigate. A British agent in Jamaica is murdered, with his office plundered of whatever secrets the opposing agents wanted to hide. The British, understandably, are none to happy about this so they rally their forces, and that force is, of course, James Bond (Sean Connery, the first man to ever play the role). First shown gambling at a high-stakes Baccarat table, Bond is very quickly called to Jamaica to investigate. During his adventure he gets shot at, beds women, finds double-agents, and eventually ends up at the secret underground lair of one Dr. No. And all of this to stop a dastardly plan for world domination. All in a day's work for James Bond. 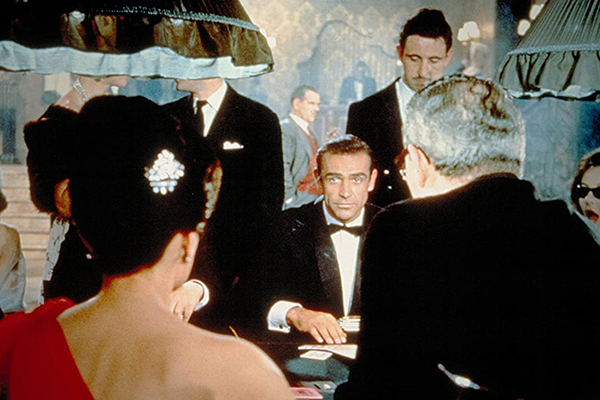 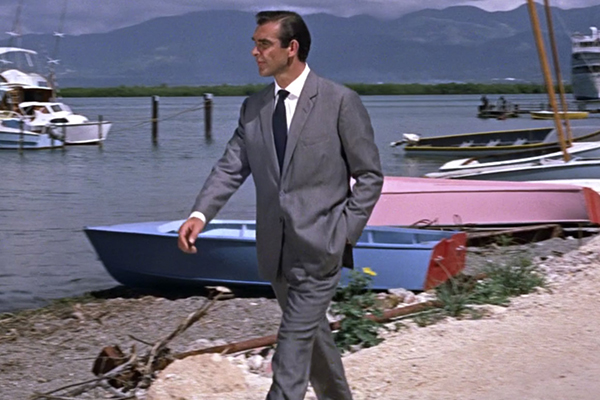 The start of the film does get the vibe right. James starts off careful, studying the lay of the land while he foils attempts on his life and casual cool. He's always seemingly on step ahead of the bad guys, seeing their traps and evading them with ease. It's an almost preternatural sense for danger, the ability to spot a trap coming and evade it. The movie never comments on it, the fact that for most characters this ability would be called "luck"; for Bond, we're just left to assume this is his training, this is what he was made to do.

I did genuinely enjoy the first two acts of the movie, from the point where the crime happens, through Bond exploring Jamaica and putting the pieces together. Where it all comes apart is in the last act when that steady, slow-burn of genuine espionage and intrigue gives way to (there's no other way to put it) Bondian-excess. The villain is revealed, the hero is captured and take to the secret, underground base, the plan is explained, and then the plot is foiled. It's the usual setup you expect from these films (especially since the Austin Powers films pointed it all out and parodied it with such glee).

So of the problem is with pacing, to be sure. The film moves along at a steady clip, never spending too long on setup or establishing shots, instead just bouncing from one scene to the next, occasionally sprinkling in just enough action to keep everything spicy and fun. But then, in the third act, the paces slows down, becomes leaden, as if the director realized they were in the last couple of reels and had to drag the story out to cover for the rest of the expected time remaining. All the intrigue is gone and we just go from one establishing scene to the next as the character info-dump all the plot to us. It becomes a chore to get through.

Part of the issue, to be sure, is Dr. No himself, as played by Joseph Wiseman. Yes, there's a bit of an issue with the yellow-face depiction of the titular villain, but the real problem is that Dr. No himself is just an utter bore. Early in the film, before the villain is revealed, when he's just a voice commanding people around, the villain seems interesting. He's this shadowy force, a villain of power and means who can seemingly do anything. He's like a good horror movie monster, never seen and always on the edges potentially behind every danger. But then, like the Wizard in Oz, the curtain is pulled back and, for the last act, we see that he's just a man, and not a particularly interesting or intelligent one. He's just a dude who wants to blow up a Mercury rocket to, presumably, stop the U.S. side of the space race. You know, for reasons... 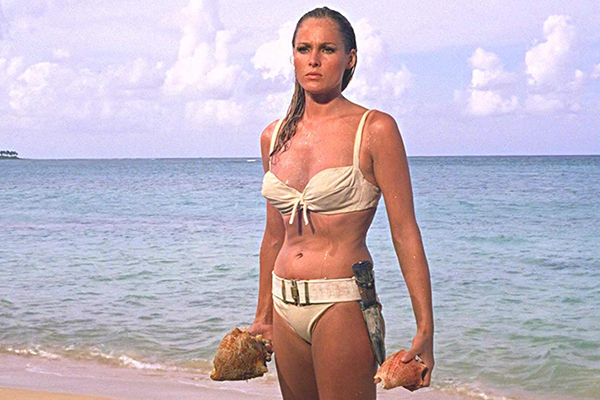 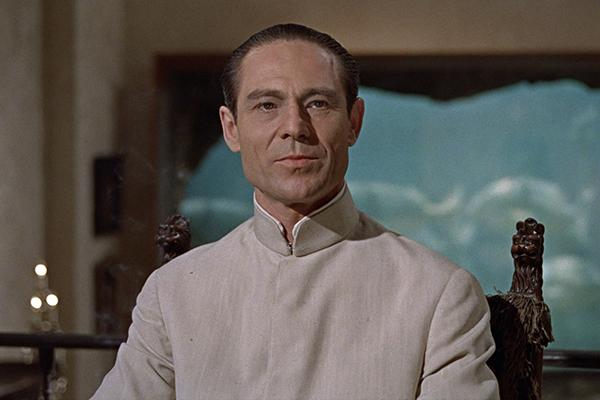 Dr. No hints at a larger organization that's working behind the scenes, a criminal organization to rival the best British intelligence has to offer, a foes perfectly suited to Bond's skills. That villainous group, SPECTRE, is the real force behind Dr. No, but I have to say that if the good Doctor is the best SPECTRE could find, they probably aren't all they're cracked up to be -- he's pretty underwhelming, which doesn't give me high hopes for anyone else in their organization. Plus, really, they have the silliest name -- SPECTRE: Special Executive for Counter-intelligence, Terrorism, Revenge and Extortion -- this side of SHIELD).

Everything in this movie, honestly, is held together by Connery. It's his cool swagger, his slightly above it attitude, his ability to play off all the silliness around him as if were real and worthy of his time, that makes so much of this movie click. He wraps the movie around him and wearing the whole of it like a really cool cloak, giving us a James Bond we can enjoy. I can see why people hold Connery up as one of the best (if not the best) Bond in the series because, damn, this man had the character down from the very beginning. Despite being Scottish, with a bit of his brogue coming through, he still seems like the best "limey" agent they could send. It would be hard, even after just one movie, for anyone else to follow this act.

But even Connery can't sell the last act. It's slow, it's silly, and the whole time you're sitting there going, "why doesn't Dr. No just kill Bond?" The villain has shown no problem bumping off anyone else that gets in his way, but he goes from mercilessly efficient and becomes a cat, playing with his food because he can? It makes no sense, not from everything we know about the character up to that point, let alone for the sake of his plan. And, of course, because the villain refuses to kill the secret agent, or even keep a couple of guard on him to make sure the agent doesn't escape, Bond is able to foil the (deeply stupid, very 1960 Sci-Fi) plan. It's just bad.

So no, so far this one movie hasn't changed by opinion of the James Bond series. Yes, I can understand why people like Connery in the role, but the films already have the tropes in place to craft one tedious movie after another: interchangeable women for Bond to bed, silly villains that should know better, and over-the-top plots for world domination that don't really make any sense the second you think about them. Maybe these films can improve from here (at least in the Connery era, if nothing else). I'm really hoping they do because we have twenty-plus more of these to get through.