The Spy Who Tried Too Hard

James Bond Eon Film #10: The Spy Who Loved Me

It's been a long time since the James BondThe world's most famous secret agent, James Bond has starred not only in dozens of books but also one of the most famous, and certainly the longest running, film franchises of all time. films had a true house style. Very often the series will swing from one fad to another, trying to adapt to what's popular at the time (Kung Fu epics and You Only Live Twice, Star WarsThe modern blockbuster: it's a concept so commonplace now we don't even think about the fact that before the end of the 1970s, this kind of movie -- huge spectacles, big action, massive budgets -- wasn't really made. That all changed, though, with Star Wars, a series of films that were big on spectacle (and even bigger on profits). A hero's journey set against a sci-fi backdrop, nothing like this series had ever really been done before, and then Hollywood was never the same. and the upcoming Moonraker), but it's rarer to find two of the movies that naturally build of one another to approach anything that can be called a "house style". 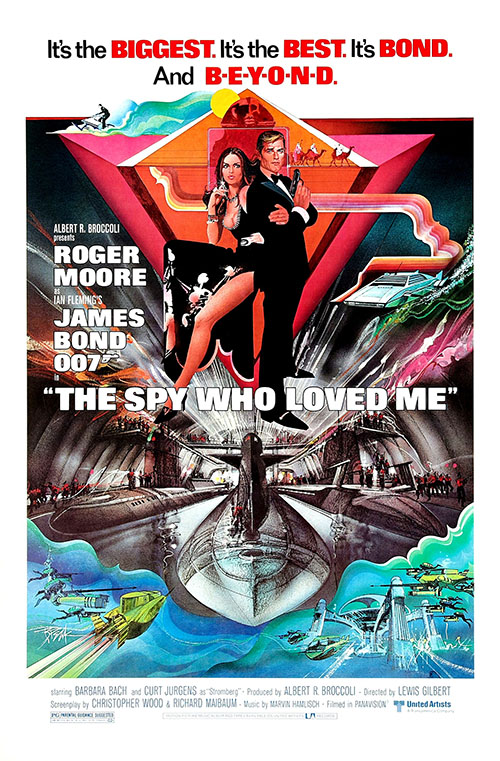 The Spy Who Loved Me is very much in that same vein, not so much acting as a sequel to the films that came directly before it but more playing on what's popular in the era; namely: disco. This is easily one of the most 1970s of the movies so far, with grinding disco beats infusing every frame of this film. If you ever wanted to hear the classic "James Bond Theme" infused with disco groove, this is the movie for you. Also note: no one has ever wanted that.

But as far as fitting into the James Bond canon, The Spy Who Loved Me feels most at home as a follow-up to the George Lazenby-starring On Her Majesty’s Secret Service. The film desperately wants to set Roger Moore's Bond up with a Bond Girl that can play as an equal to him. It sets up Barbara Bach as Russian Agent Anya Amasova, a secret agent with all the smarts, skill, and daring of MI6's own James Bond, just in a female figure. The hope, you can feel the film desperately saying, is that she'll have the same kind of chemistry with Moore than Diana Rigg's Tracy had with Lazenby's Bond.

What betrays the film isn't the story, which is actually pretty grounded for a Bond film, or the action, which is frankly pretty decent. No, it's Bach who not only lacks chemistry with Moore -- but then, to be fair, Moore has lacked chemistry with just about everyone in the series so far, so that's really Moore's fault -- but also lacks the basic acting ability to really sell her Russian agent. She doesn't have the spunk, spark, or fire that are required to play this character, so while on paper her agent may be an equal to Bond, she lacks the presence to back it up.

Bach's Russian agent is paired up with Bond after both a British and a Russian sub both go missing. After initially blaming each other (and every other faction in the Cold War), the two sides choose to work together to try and figure out who or what is behind these incidents. And, if you've ever watched a Bond film before then you already know what the answer is: a megalomaniac bent on fulfilling his dream of world domination. 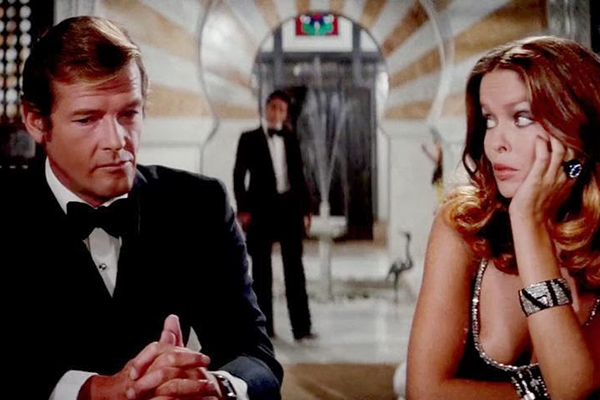 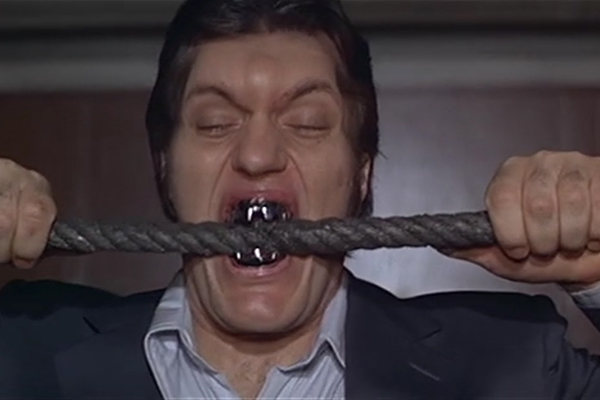 The villain in question today is Karl Stromberg (Curd Jurgens), shipping tycoon and wold-class scientist. Stromberg has a love of the aquatic, hoping one day to build vast cities under the water where humanity could eventually live permanently. His goal, in stealing the subs, is to use the nuclear warheads equipped on each one to launch attacks on the U.S. and Russia, triggering World War III. While the topside crumbles under the attacks, and then resultant nuclear radiation, Stromberg and his selected few would be safe under the water, protected by the ocean so they could build a new hope for humanity. Amasova and Bond will have to work together to infiltrate Stromberg's base -- a vessel capable of capturing subs -- and stop the attack, lest the world be destroyed.

Credit to this film, we once again have a villain with an eye toward environmental concerns. The villain sees the damage humanity is causing to Mother Earth and wants to find a way to wipe it all away, to save Earth from the humans. Considering this is a problem we're still grappling with 40 years later its interesting to note two films in the chronology so far (including the previous The Man with the Golden Gun) discussing this topical issue. It doesn't do it well, of course, but it's nice that it's raised at all.

Unfortunately the whole plot is tied to Stromberg, yet another villain in the long line of James Bond villains who lack the charisma, let along the back-story, to really sell their plot. It's like these villains are generate in some kind of machine, created and then cranked out all from the same mold, just with little variants done to each one (like multiple versions of action figures). There's little to differentiate Stromberg from Blofeld, or any one of a number of other villains that have come before. He's not anywhere near as interesting as Auric Goldfinger or Scaramanga, and that betrays his story -- you simply don't care about him at all, so why worry if he's going to succeed?

Honestly, if there's any villain that's actually interesting in this film, it's Richard Kiel's Jaws. Tall and imposing, Richard Kiel could play a fantastic heavy (and, of course, that was most of his career in Hollywood). Even before he opens his mouth to reveal his eponymous metal teeth, Jaws has a presence. He never speaks but he has style. Of course, the metal jaws do give him even more style, helping to sell the character further. There's a reason why Jaws sticks around for a second film while Stromberg is dispatched easily by the end of this movie. 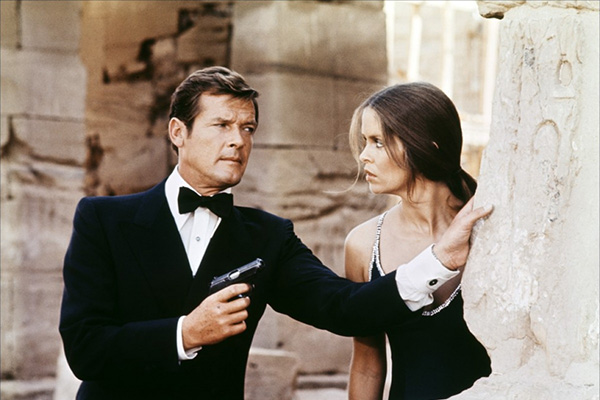 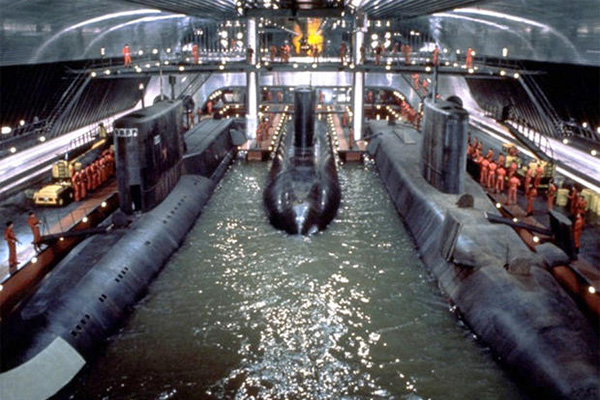 Frankly, nothing about the main villain works, and that includes his scheme. Oh, I like the idea of someone wanting to build an underwater city, sure, but to pull it off the way Stromberg wants requires you to completely ignore a major issue: he has a ship, one that floats on top of the water, that can capture submarines. Literally it opens its doors and the subs just float on in. Subs, things that could easily dive under the ship to avoid the bay doors. Armed military vessels with weapons that could fire on the ship. Does any of this happen? No. Stromberg's vessel opens its doors and it's like the subs don't know how to deal with it. "A bright light, we must float in!" It's so stupid.

And that, really, speaks to the big issue why (other than its name) The Spy Who Loved Me isn't remembered fondly like Goldfinger or The Man With the Golden Gun: it just doesn't really understand the kind of film its building. Parts of it are quite competent - the big action climax, as well as any time Bond and Jaws face off -- but most of the time it's just stitching random pieces on from other Bond films together without much clue how to make them all work. Megalomaniac? Check. Love interest equal to Bond? Check. Dumb gadgets? Check. It's a Bond film going through all the motions but without any real spark to it. It's fine, but nothing more than fine.