It's fair to say that James BondThe world's most famous secret agent, James Bond has starred not only in dozens of books but also one of the most famous, and certainly the longest running, film franchises of all time. has a certain formula. The series has been through so many iterations (eighteen at the time of this film's release) that the house style has not only cemented but quite solidly ossified. Put whatever veneer you want on it, the bones of the film will bear out through and through. It's the little additions each film makes, and the the actors they bring in to star in a particular vehicle, that sets the tone for any given movie. 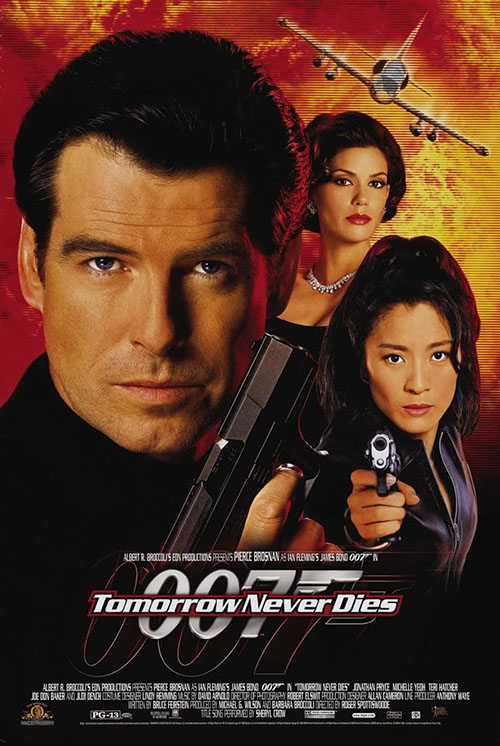 That's certainly the case with this 18th iteration, Tomorrow Never Dies, the second Pierce Brosnan movie and the first truly post-Cold War film in the franchise. If anyone wondered how Bond, a true Cold War hero, would handle his adventures in this brave new world, the answer is quite simple: swap out China for Russia and trade Brosnan in for any of the previous Bonds, and then just call it a day. This is a film that could have come out before the fall of the Soviet Union and, aside from a little less Kung Fu (although considering You Only Live Twice and The Man with the Golden Gun, maybe not), and it's doubtful you would have noticed much of a difference.

In part that's because of Brosnan himself. Don't get me wrong, he's definitely a charismatic actor, and when he wants to turn on the charm he does it really well -- better than Roger Moore ever could. That's about the only thing he has over Moore, though, as in all other respects Brosnan's Bond is as corny and silly as Moore's, except so far he hasn't had to wear clown makeup. It's like having someone's dad (a very charismatic dad) take the lead role in the movie with how many bad jokes and one liners he makes. It's hammy is what I'm saying.

But along with the hammy, Moore-level writing and performance for Bond, this is as cookie cutter of a story as you could get. The plot focuses on Elliot Carver (Jonathan Pryce), a media mogul with delusions of grandeur. Think of him like Ted Turner, but even more megalomaniacal. Carver wants to take his media group, the Carver Media Global Network (CMGN), and make it the number one source for all news on the planet. To do this he gets the idea to manufacture the news, so he comes up with this elaborate scheme to get stealth tech, have a special stealth boat built, and then use to it cause a war between Britain and China (to countries that, in 1997 and before the hand over of Hong Kong back to China, were in an uneasy truce).

Of course, when a British ship is sunk under mysterious circumstances, there's only one man to call: Bond, James Bond (Pierce Brosnan). Bond immediately makes for Carver's big CMGN launch party where the global group is putting its new media channel on the air. This gives him a chance to study Carver, but it also puts him Carver's cross-hairs. Soon, Carver's men are trying to kill Bond, a Chinese spy (Colonel Wai Lin, played by Michelle Yeoh) is aiding him, and the whole big plan gets put into action. Bond and Wai Lin will have to get on the boat and stop the scheme before Carver launches World War III. 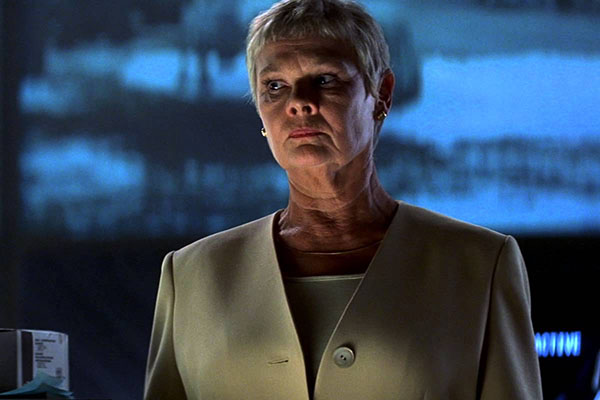 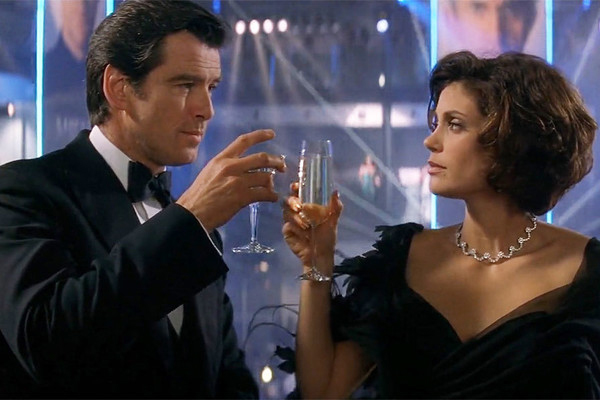 So many of these pieces feel like they came from other films. We have the insane mogul with delusions of grandeur. (which, let's face it, is the villain of practically every Bond films), his special boat (The Spy Who Loved Me) and his plot to cause a massive war (also The Spy Who Loved Me). There's the Bond girl (Terri Hatcher) who develops a quick connection to Bond and then suddenly ends up dead over the villains jealousy (as in Goldfinger), stolen bombs (Thunderball), and a lot of Kung Fu shoved in rather awkwardly (the two movies I mentioned before). It's a lot of parts but not really a cohesive whole.

When it works the film is pretty fun. That is all thanks to the game cast, Price and Yeoh included. Price's Carver is a standard Bond villain through and through, in it for the fame, exposure, and lots and lots of money, damn the consequences. Price is able to elevate the character by chewing all the scenery ever, leave very little for anyone to stand on. It's a gloriously hammy performance but that's till better than so many tedious and boring villains we've had in the past. He's not one of my favorite villains, largely because Carver's plan makes no sense and frankly requires all the nations of the world to be easily confused and totally inept (which, sure, governments can be but not in the ways this film depicts), but I thoroughly enjoyed Price's performance.

Yeoh, too, gets time to shine as this film's primary Bond Girl. Yeoh is, of course, a fabulous martial artist and the film makes good use of her, including her gameness for stunts as well as her ability to act the shit out of anything. She has a couple of fantastic sequences -- a martial arts fight that I have no doubt she helped choreograph, and then a motorcycle chase that she shares with Brosnan -- and Yeoh is great in both of them. That's honestly a bit of an issue, really, because Yeoh is so much better at it than Brosnan, whop is playing the lead mind you, that when the film inevitably has Bond take over as the hero of his own story you just wish we could have had it stay focused on Yeoh's Wai Lin instead.

Having Yeoh is set does help to sell all the action, of course, aided by the fact that this film invests heavily in on-location practical effects. Although there are instances where stunt doubles were used and a bit of CGI trickery helped to sell the action, this film goes all in on trying to really sell the scene, with the best blend of action and effects we've seen in the series yet (no obvious rear projection screens in sight). And when you throw Yeoh into it, an actress that came up in the Hong Kong action scene, it all works even better. 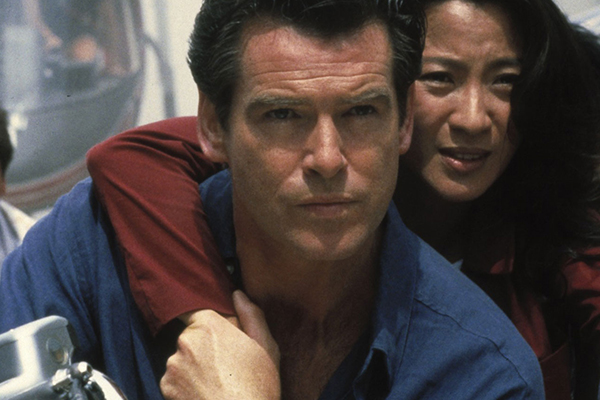 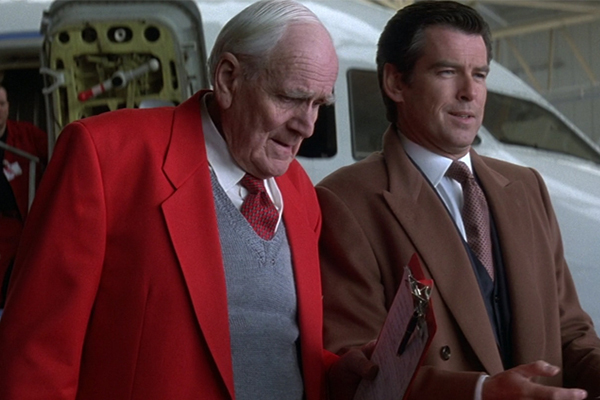 The flaw here is Bond. Some of it is on Brosnan and his hokey, silly performance. Maybe he could have delivered the one-liners better (and less in a dad-joke, above it all kind of way), maybe he could have put his foot down and said, "Bond should be more serious." Fact is, though, that he didn't and his character is the sore thumb of the film, sticking out badly and ruining the mood more often than not. The film really tries to up its game, invest more and more in the action to play with the other action films coming out in the era, but with a Bond like this it's hard to take anything serious or to care.

Frankly, this version of Bond is starting to feel more and more like a relic. I know things take a turn for the better once Daniel Craig takes over the role (having seen his films before coming to watch all the James Bond films in order), but now I can see why everyone considered those films to be such a revelation. If this is how we're going to finish out the original series of Bond films (with two more to go), then frankly I'm going to be sad. Brosnan, you need to do better.