And here we are, the end of the first era of the James Bond films. This would mark the last time Sean Connery, the first (and, for many, best) Bond in the series, was supposed to officially appear in one of these films. Except that after the next film, Connery would return (and then return again in an unofficial Thunderball remake), so this film just marks a weird transition period for the series. 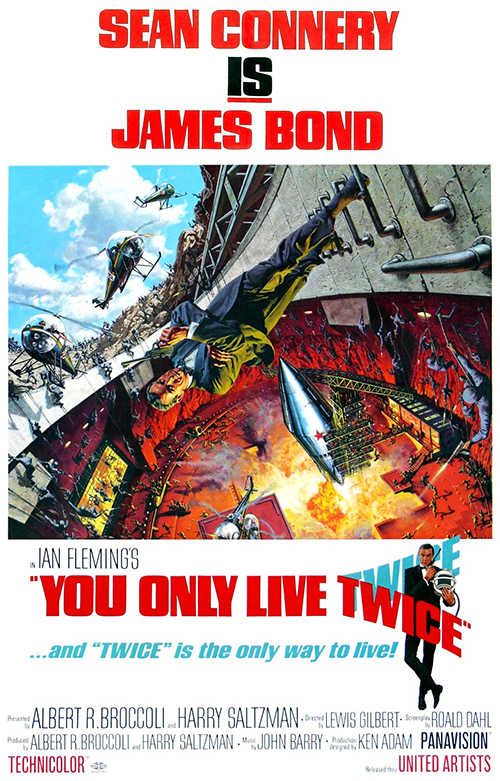 Transition is a good word to describe so much of the design of this film. Although it probably wasn't known that Connery was leaving after this (without ever truly escaping), the fact is that the series was already starting to feel a little long in the tooth. So much of the setup of this film feels like it was borrowed from previous movies -- dodge-and-feint intro that tangentially affects the rest of the film, a bond girl who doesn't want to love James but, in the end, does, and the villains who feel compelled to explain everything to Bond (while secured in their secret volcano layer) just so our super-agent has a chance to escape. Nothing about this feel really feels new or fresh when compared to the rest of the films up to this point.

The most original idea the film has is setting things against the backdrop of Japan. While Bond supposedly goes anywhere for his missions, he has spent quite a lot of time on the tropics near America, or in Eastern European hot-spots that could double as any other European location. Japan is the first really new setting for the series and the movie invests heavily in the location, making so much of the movie rotate around Japan, it's culture, and it's attitudes.

Although, really, what I mean is that it sets itself around the Western idea of Japanese culture. This film tries to represent itself as an honest depiction of our Eastern ally but, pretty quickly, it devolves into a play through all the worst stereotypes and tropes you could expect. If the thought of a white dude being dropped into the middle of Japan already sends shivers down your spine, anticipating just how awkward it could get, then believe me: it goes every place you fear, and so much farther, right down to putting Bond in yellow-face by the end of the film. It's that bad.

To get all this in place, the film sets up a (largely implausible) scheme from SPECTRE. The U.S. launches a spacecraft but, while the astronauts are conducting as space walk, a mysterious ship floats up behind them and captures the ship (what happens to the capsule after that is never really explained -- presumably SPECTRE sells it to a chop-shop for parts). The U.S. blames Russia, the Soviets claim innocence, and tensions escalate. Meanwhile, the Brits, acting as mediators, think that the ship-thieves might actually be based out of Japan, they just need someone to head to Asia to check it out. Enter James Bond (that's what she said). 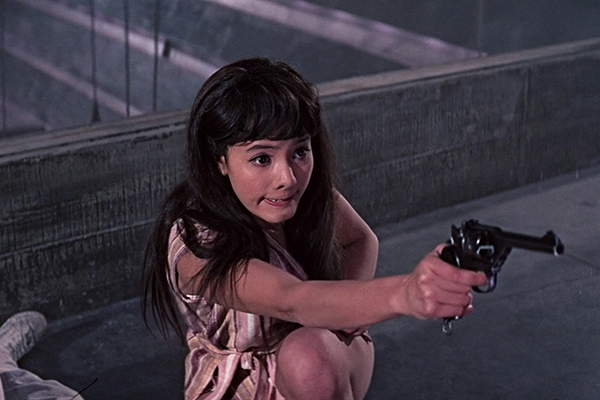 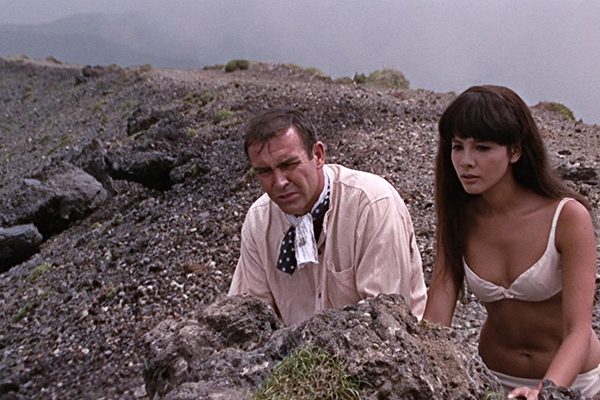 Heading to Japan, Bond (Sean Connery, of course) makes contact with the MI6 associates that will assist him: Tiger Tanaka (Tetsuro Tamba), Japanese Secret Service lead, and capable Bond girl Aki (Akiko Wakabayashi). Delving deep into the matter, these three discover that the space craft are being stolen by a front company and, naturally, the real villains are SPECTRE (Bond puts this together on his own with little evidence, and everyone agrees it just makes sense). This leads all the heroes to a secret Volcano Base, an installation Bond (with the aid of Tiger's ninja assassins -- yes, really) will have to invade if they hope to prevent further thefts and all out war.

This film is an absolute mess, make no mistake. I had hope, for all of five seconds, that the film might actually have wanted to care about and respect Japanese culture, but that went out the window soon after an early Sumo Wrestling match (which was included, obviously, because all that Westerners know about Japan is sake, sushi, and sumo). In short order we start getting long lectures from Tiger about Japanese culture, none of which sounds in the least bit accurate unless you're a dumb white person that doesn't know better. Sure, every Japanese man had four women that regularly bathe him. Of course the Japanese Secret Service would have a Ninja training school. Naturally every Japanese person will think a tall, Scottish man with a thick accent is a Japanese person with just a but of yellow paint slapped on his face. It boggles the mind.

I had to divorce myself from a lot of modern attitudes while watching this film because, of course, this movie came out in a different era. It's fair to observe that the film hasn't aged well (and that's an understatement), but at the very least I wanted to try and enjoy the film from the perspective of someone watching it back in 1967 when it came out. But even then, I just don't see it. This film, quite simply, is awful, awkwardly paced and poorly stitched together.

Most of the problems come from the action. This film obviously wanted to build on the Martial Arts boom in film at the time, which is why the movie was set in Japan. Every action sequence features martial artists throwing themselves around. The issue is that Sean Connery, while a capable actor, was not up for any of the stunts in the movie. Hell, going through and watching these movies, Connery wasn't really good at any of the stunts in any of his movies (Connery belongs in the William Shatner school of unbelievable fighting). His stunt choreography, in general, is terrible but up against actual martial art stunt people, it's even worse. Bond is woefully out of his depth, hilariously overwhelmed, and yet the movie tries to make it look like he's a capable match for all the guys tossing themselves at him. It just doesn't work. 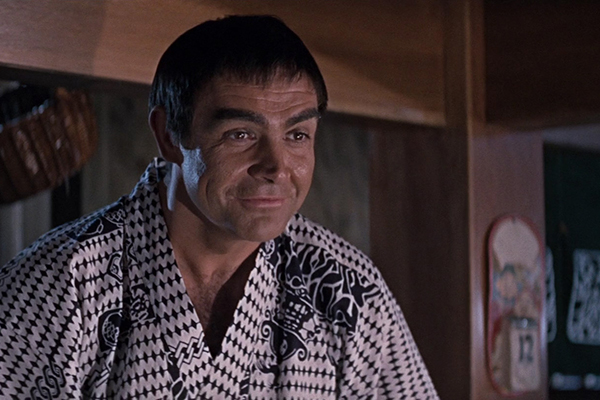 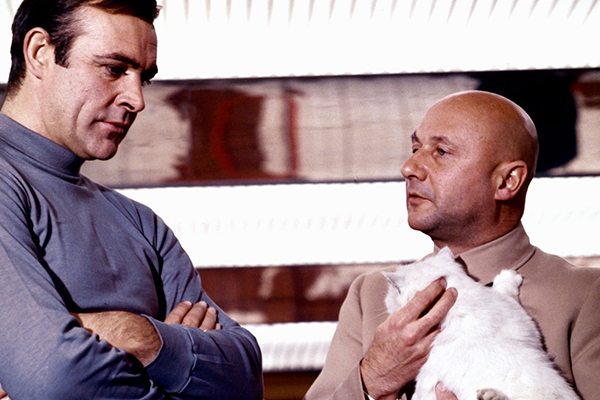 The pacing of the story, too, doesn't hold together. The film, like many of the movies in the series before, it less an actual story than just a collection of scenes, like a brochure of all the (worst, most stereotypical) spots in Japan. Bond never really solves anything or does anything that requires the skills of a secret agent; he just wanders from scene to scene with people telling him where to go and what to do. Then people attack him, an action sequence happens, and it's on top the next random scene. Things happen, but none of it is very convincing or well thought out.

The best part of the movie, surprisingly, is SPECTRE -- surprising since I've hated SPECTRE in every movie before this. Make no mistake, SPECTRE's motivations are still shrouded and hard to understand -- they want to cause World War III before someone is paying them to do so, but when you think about it if the world ends because everyone has blown each other up, how is SPECTRE supposed to spend all that money? -- but at least they finally come together as a villainous organization. That, in no small part, is thanks to Blofeld, played deliciously by Donald Pleasance. Giving Blofeld a face, and a strong actor to play him, brings SPECTRE into light and makes them so much more interesting.

That said, not even a good run from SPECTRE can save this dire film. It's a bad movie by 1960s standards (despite audiences at the time flocking to it for no good reason I can understand), and it's especially terrible when viewed through a modern lens. While Connery, as well as Pleasance, do what they can with the material they're given, there's just nothing that could save this film. Connery made the right move trying to get out of these films when he could. Sadly, the series would go on (and suck him back, despite his best intentions).