From many stories I've read, the James BondThe world's most famous secret agent, James Bond has starred not only in dozens of books but also one of the most famous, and certainly the longest running, film franchises of all time. series was at a bit of a crossroads in 1983. While the movies continued to be financial successes, the last film, For Your Eyes Only, had failed to make the big Box Office bank that previous entry, Moonraker, had brought in (of course, that movie was designed to capitalize on the sci-fi extravagance of Star WarsThe modern blockbuster: it's a concept so commonplace now we don't even think about the fact that before the end of the 1970s, this kind of movie -- huge spectacles, big action, massive budgets -- wasn't really made. That all changed, though, with Star Wars, a series of films that were big on spectacle (and even bigger on profits). A hero's journey set against a sci-fi backdrop, nothing like this series had ever really been done before, and then Hollywood was never the same. which is likely the reason why). There was blood in the water, and by 1983 two rival James Bond films hit theaters: official movie Octopussy and non-EON Productions film Never Say Never Again. Could Octopussy pull the official series out of it's tailspin? 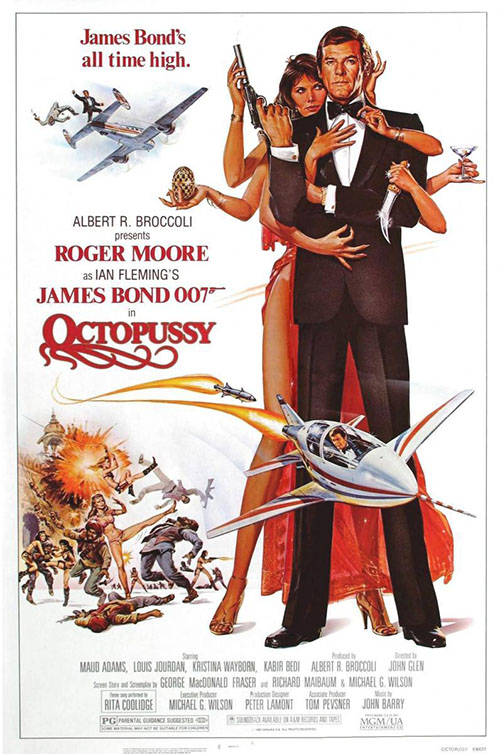 I will admit that I've been pretty harsh on a number of the Bond films over the course of my reviews. Not only was I not a fan of the Sean Connery films in general (aside from Thunderball, and even if I felt he did have the right charismatic swagger for the role at least), I've honestly liked the Roger Moore films in general even less. They're silly, hokey, and not very well constructed in general. It's felt for a few films like the James Bond series under Moore's tenure really lost its way.

But then we come to Octopussy another one of those films that fans don't really seem to like -- "James dresses up as a sad clown!" -- but I actually found myself rather enjoying. I wouldn't go so far to say it's one of the best films in the series, but it is among the best of Roger Moore's run, and that's not nothing. Frankly, considering the fact that I've watched his next (and last) entry as well, I have to admit that Octopussy marks a bit of a turning point for the Moore era as the films finally started getting good. Sadly, it happens right before he leaves the role.

In Octopussy, James (Moore, of course) is pulled in to investigate a forged Faberge egg after another British agent is killed attempting to smuggle it back to MI6. Curiously, the real egg is up for sale on auction so James (assisted by a knowledgeable expert) goes to the auction to find out the truth. There he casually steals the egg (replacing it with the forgery) and then studies the agents obviously sent to the auction to buy it back This puts Bond onto the trail of the real mystery.

It seems that the egg is one of a number of Russian treasures that have been leaking out of the Soviet Union over the last few months. A Soviet general, Orlov (Steven Berkoff), is dumping these priceless jewels on the market via the seemingly legitimate art trader Kamal Khan (Louis Jourdan), but Kahn is really a major player in the criminal underworld and he's helping Orlov with the real plan: smuggle a nuke into the United States to weaken the country and upturn the current world order. And, as cover, they plan to do it via jewel smuggler (and also legitimate business woman), Octopussy (Maud Adams). Yes, that's really her name. SO James, of course, has to stop all the evil plans before all of NATO falls under this nuclear attack. 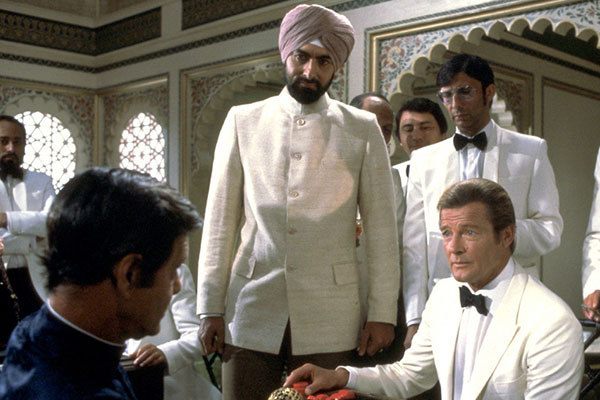 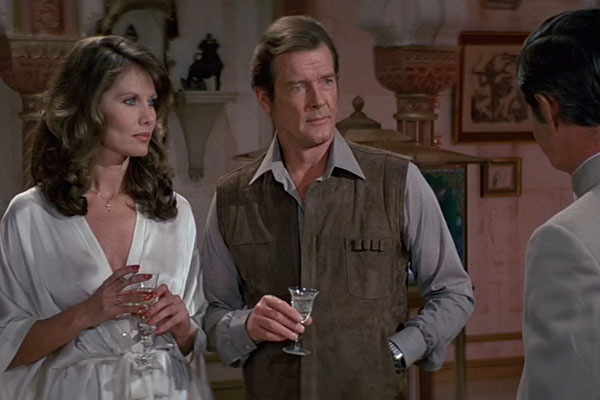 Octopussy is, frankly, a hard movie to judge. On the one hand it's another solid tale of Cold War terror, with a dissident Russian general attempting to weaken the West so the Soviets can invade Western Europe and spread their empire even further. The motivations for this plan are clear and, at least from a Western perspective it's a legitimately plausible storyline that hit right at home (although I'm sure the U.S.S.R. found this plot laughable at the time). I like how down-to-earth this part of the story was and the fact that the movie was trying to keep things grounded and real.

And then you get to the very Bond, exceedingly silly Moore-era antics of the other half of the movie. Octopussy is a ridiculous name, but her moniker is the least ridiculous part of this whole feature. Somehow the smuggler has crafter her own private island paradise populated only by women of skills and abilities. Although she made her money as a smuggler, she went legit years ago and purchased all kinds of businesses, including a circus. A circus, it should be noted, that she runs and performs in, along with many of her women. And these women use their skills in the circus tent to work as assassins outside the circus as well. It's like the producers here remembered the storyline for Pussy Galore from the novel Goldfinger (which that movie didn't use for her back-story), the one where Pussy was the leader of a band of circus performers, and decided that since Octopussy had a similar name it was good enough. It's just really dumb in context.

Plus, frankly, the two halves of the movie simply don't seam well together at all. I get using a smuggling rung to secret a nuclear bomb onto a U.S. base. Sure, that's what shady smugglers would do. What doesn't work is using the jewels for sale as a cover, and then having Octopussy act as an unwitting accomplice to everything. Berar in mind, Orlov and Kahn know what the real plan is but they trick Octopussy into moving the bomb, and not jewels, simply by not telling her the real plan. The jewels are an absolute red herring despite being the main thrust of the first half of the film and the whole reason Bond gets involved. It makes no sense. If they wanted to move a bomb around, just find really shady terrorists and use them for the task, not a kindly women who also runs a circus for... reasons.

The one thing I did like about Octopussy was that she an age appropriate pairing for Roger Moore. As with Sean Connery at a certain point in his run, Roger Moore reached the point where he was no longer young enough to go chasing after every young woman that wandered on screen, at least without it seeming creepy and weird (thus, I'm sure, why they had him skip out on sex with the young-but-legal Bibi in the previous film). Octopussy is a more mature woman, a solid pairing for the MI6 agent at this time in his life, and I felt like the two of them legitimately worked as a couple. That was a solid choice. 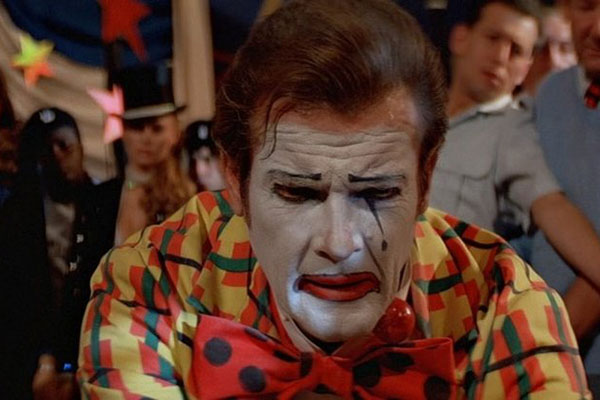 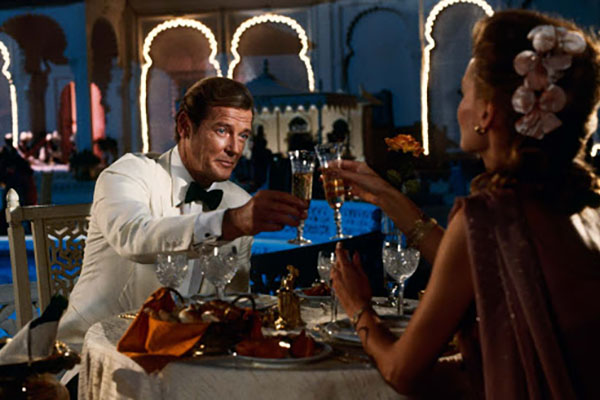 Really, I wish the producers would have contemplated the story setup here and come up with a more plausible back half for the whole scenario. The front half of the movie is great but once the titular character appears everything quick gets derailed. James Bond going after smugglers and nuclear weapons works great, but the fans are absolutely right when they note that he has no business getting involved in a circus. It's just silly and weird, and totally not in a good way at all.

Still, I do think this movie is more successful than the other Bond flick from this year, Never Say Never Again. It's more aware of the age of its secret agent, more willing to play with the long history of the series and, most importantly, it tells a new story (no matter how silly it gets) instead of telling a retread of a story we've already seen. Between the two I'll pick Octopussy ever time.