The War Among the Stars!

Speaking of how James BondThe world's most famous secret agent, James Bond has starred not only in dozens of books but also one of the most famous, and certainly the longest running, film franchises of all time. films are constantly trying to mimic other, popular films that have come out, welcome to the James Bond desperately trying to catch some of that sweet, sweet Star WarsThe modern blockbuster: it's a concept so commonplace now we don't even think about the fact that before the end of the 1970s, this kind of movie -- huge spectacles, big action, massive budgets -- wasn't really made. That all changed, though, with Star Wars, a series of films that were big on spectacle (and even bigger on profits). A hero's journey set against a sci-fi backdrop, nothing like this series had ever really been done before, and then Hollywood was never the same. money. The first of those films came out just two years earlier so, of course, the Bond producers just had to have their own take on the material. 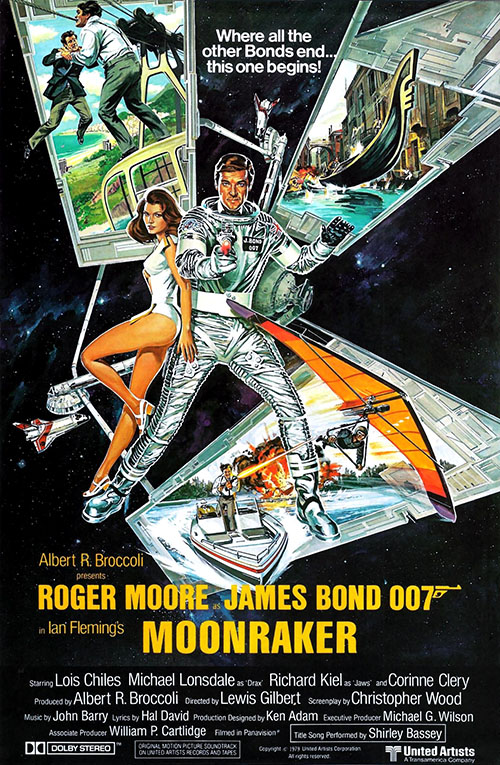 Although I'm not prone to doing much research before watching a film (since I prefer to let the movie win me over, or not, based on its own charms) I was curious about the publication history for Moonraker since, famously, this is a film desperate to cash in on the sci-fi trends of the era. Interestingly the novel, which was called Moonraker, was published in 1955 and, as far as the movie was concerned, the title was all that was needed to craft a movie. Nothing else about the novel was used, short of a connection between the villain originally being a Nazi and the movie talking about crafting a "master race".

It's a pity, actually, because the novel is one of the few Bond films to be set entirely in England. That could have made for a different kind of movie in the series, one that was less concerned with being a tropical travelogue. Heck, it could have been a travel journal if it wanted, just one focused on England for a change. It at least would have been more interesting than this half-baked sci-fi film that doesn't really understand any part of the genre its playing in. Like, at all.

In Moonraker (the film), Bond is called in after an experimental, private funder space shuttle, Moonraker I, is stolen in a mid-air test flight. Bond has to investigate around Drax Industries, the creators of the shuttle, to see if they have any clue about how or why the shuttle might have been stolen. While at D.I., Bond meets with Dr. Holly Goodhead (Lois Chiles, playing a character with a name right up there with Pussy Galore), a head astronaut trainer and lead on the Moonraker project. Goodhead, also, is a plant from the CIA, one sent into investigate the project to see just what is going on behind the scenes.

Both MI6 and the CIA have good reason for their curiosity as the culprit of the theft from Drax Industries is, in fact, Drax Industries. Yes, Hugo Drax (Michael Lionsdale), has plans for not just that shuttle but five more that he's built (Moonrakers II through VI) and, after getting government dollars to help him fund his shuttle he then stole it back so he could use it. He intends to send all six shuttles to a space station , each carrying a compliment of gorgeous young people to help Drax build his "master race". Then he'd wipe all human life off Earth (with a biological agent launched from the space station), clearing the way for his master race to repopulate the world. And he'd be able to get away with it, too, if Bond and Goodhead would stop mucking about in his plans. 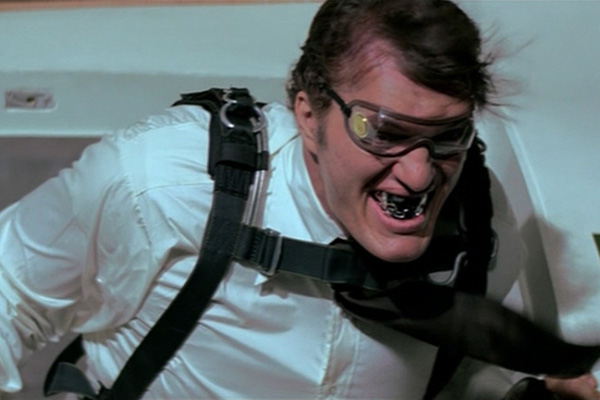 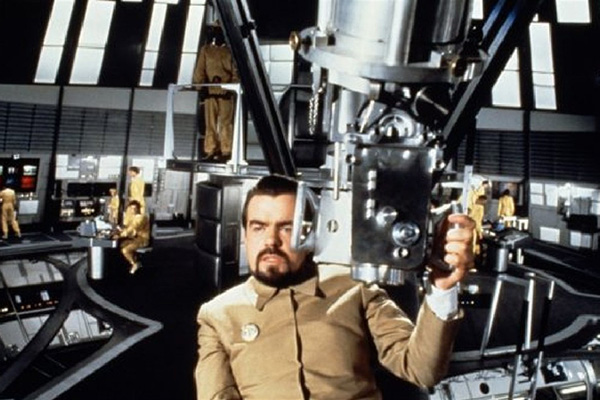 You can feel the desperation at play, with the producers desperately trying to craft their own space epic for Bond (which, credit where it's due, this was the most successful Bond film until Brosnan's Die Another Day in 2002). Bond, however, is not a character inherently equipped, in story or style, for a space epic. He's a very traditional, almost staid agent (in the sense that while he goes on adventures, each of his movies follows a tried and true formula). To get Bond into space for a sci-fi extravaganza, the film has to make a whole ton of logical leaps.

For starters, one has to assume that the government can just lose track of a space shuttle. These aren't exactly small objects and, considering the fact that the nations of the world, even back in the 1970s, could detect a missile in flight (which is much smaller than a shuttle), it would be very hard for a shuttle to disappear, especially under mysterious circumstances. The same also goes for the space station Drax somehow, mysteriously, puts into orbit around Earth (which has radar jamming capabilities, so we're told). How could he launch it into space and get it assembled (before the jamming device was Online) without anyone on Earth noticing?

For that matter, why does Drax even need government funding? He's paid to build one shuttle but, in the process, he builds five others. If he can build five in secret with his own money, couldn't he build the sixth without the government needing to be involved? Hell, if he can launch them into space without anyone noticing, he clearly would never have had to involve the government at all, and if he didn't bring them in for one shuttle then they never would have been on the case with Drax Industries to begin with and he could have launched his whole scheme without anyone being the wiser.

And then you get to the space part of the space and any kind of plausibility (what little there was) is thrown right out the window. Drax's space station is discovered (thanks to Bond and Goodhead), so NASA immediately mobilizes a shuttle, armed with laser-firing soldiers, to take out to e base and all its men. If you know anything about space -- aiming things at a space station, the time it takes to get a launch ready, let alone the stupidity of laser weapons in any context -- then you already can't buy into anything the movie is trying to present. I know I couldn't, and that doesn't even get into the fact that the film has a flimsy grasp of gravity in space such as how to generate "artificial" gravity via centrifugal (rotational) force, which it tries to apply (because 2001: A Space Odyssey did it) but doesn't it in a slap-dash and inconsistent way. 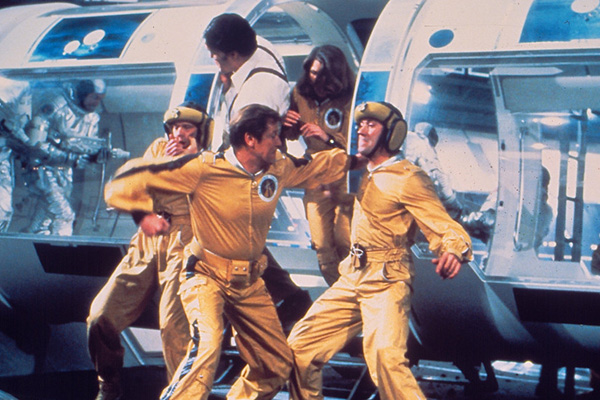 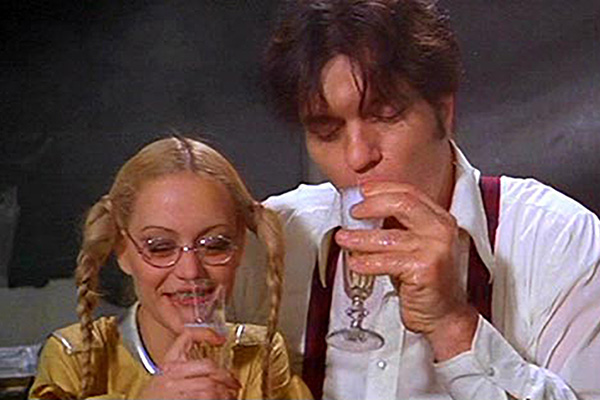 My favorite moment, though, is when a crew of the "master race" is in space, with no gravity, waiting to dock at the space station, and the long hair of one of the ladies in the crew naturally cascades down as if pulled by gravity. Like, guys, when editing this thing did you really not notice that and not have a better shot to use? Seriously?

If it feels like I'm ripping harshly into Moonraker, well, I am. I do like it when series try something new, to get out of their comfort zone and find something different and interesting to attempt with their formula. That should, generally, be encouraged. That said, it's important that the series try something new that also fits within the role already crafted for the series. Bond, while a series that has played a little fast and loose with technology, often veering a little too close to sci-fi with all the laser-armed wrist watches and cars that can turn into subs, still tried to remain at least a little grounded in our reality, playing in the political and social world we live in. Moonraker, though, abandons all of that in a naked attempt at making a Star Wars for the James Bond set and it just doesn't work. At all.

Yes, the visuals are pretty, and yes the actors all throw themselves into it as best as they can, but none of it matters if I can't invest in the story the movie is giving me and, basically from the halfway point, once the villain's scheme is revealed and we head into the home stretch, by brain shut off. I was okay with Moore's Bond (continuing his trend of inoffensively bland acting), rather liked Chiles's Holly Goodhead (despite the name), and was happy to see a return of Richard Kiel's Jaws (who still gets to be just as awesome in the role as he was last time), I didn't care about any of it. This sci-fi epic fell flat, making for one of the dumbest, and most tedious, Bond films I've had to suffer through yet.