Last year we went through the whole of the James BondThe world's most famous secret agent, James Bond has starred not only in dozens of books but also one of the most famous, and certainly the longest running, film franchises of all time. series, 24-plus films spanning a good four decades. I did that at the time because somehow I'd ended up with the complete run of the mainline films, gift from other people as I have never been the biggest fan of James Bond and his adventures. Hell, the only one I ever really liked was Casino Royale from 2006 (although sequel Quantum of Solace was also pretty decent). That run through the films showed me there was maybe one or two other films (like On Her Majesty’s Secret Service I could enjoy from that series but, by and large, 007 just wasn't for me. 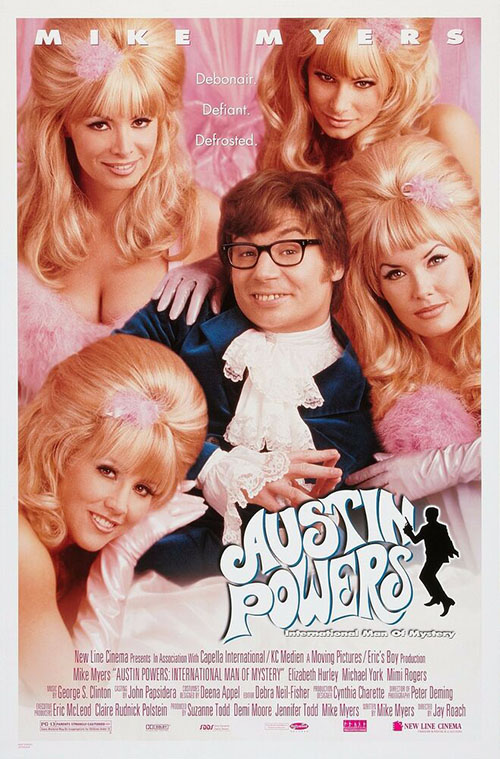 That said, and credit where it's due, watching my way through the whole series did give me a better appreciation for the most famous parody of that international spy: Austin Powers. Having starred in three films (of varying quality, admittedly), the Austin Powers film are very loving tributes to the classic James Bond films, most specifically those movies from the George Lazenby and Roger Moore eras (the 1960s and 1970s Bonds). Having now seen all of the original Bond films, I do have to admit that I get more of the humor behind the Austin Powers films. I enjoyed them before, but now more of the material plays for me.

Austin Powers is, in essence, James Bond (just played by a shorter, nerdier, hairier man). He's British, he's a spy, and he barely even tries to conceal who he is or what he's doing anywhere. James Bond had Blofeld, Austin Powers has Dr. Evil, and between these two characters (both played by Mike Myers), the film is able to mine a ton of humor. You can think of it like an A- and B-plot as the one side focuses on Austin and his adventures while the other is totally focused on Dr. Evil and his plans. It works well in that format, letting the film skewer all it can from the classic Bond films, while also just generally playing around and finding as much humor as it can from, well, everything.

In the movie we start in the 1960s where Dr. Evil (Myers) laments the fact that his minions, time and again, fail to kill Austin Powers (also Myers), International Man of Mystery. After another abortive attempt fails to kill off our super-spy, Dr. Evil escapes, flying off into space (in a space ship shaped like a Big Boy), cyrogenically freezing himself for an indeterminate amount of time until he can come back assured that Powers will no longer be a threat. Except, in response, Austin also has himself frozen to await the day Dr. Evil returns.

30 years later, the Big Boy descends out of the sky, marking Dr. Evil's return. This sends British Intelligence into a tizzy. Austin is quickly unfrozen, set up with Miss Kensington (Elizabeth Hurley) as his spy-handler, and sent out to Las Vegas to track down Dr. Evil and stop whatever plan he may have in action. A lot changed in the last 30 years, though, and Kensington has to train Austin in how to be a spy in the 1990s. Meanwhile, Dr. Evil has to adjust to the new time period as well. His minions made him a son (when they weren't sure when Dr. Evil would return, Scott Evil (Seth Green), and set about building their evil empire into a real business. Dr. Evil, though, wants to rule the world, and he has the nuclear missiles to make it happen. It'll be spy versus spy by the time these two out-of-time agents come face to face. 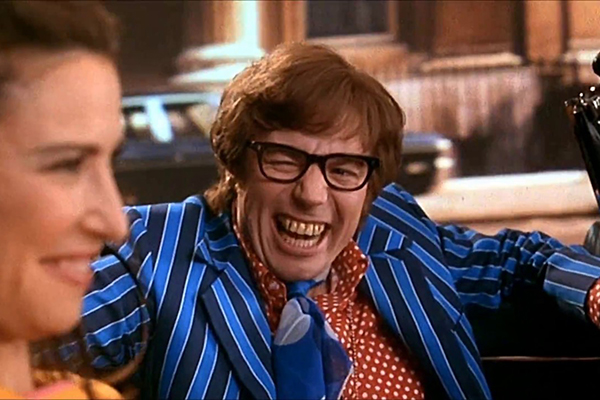 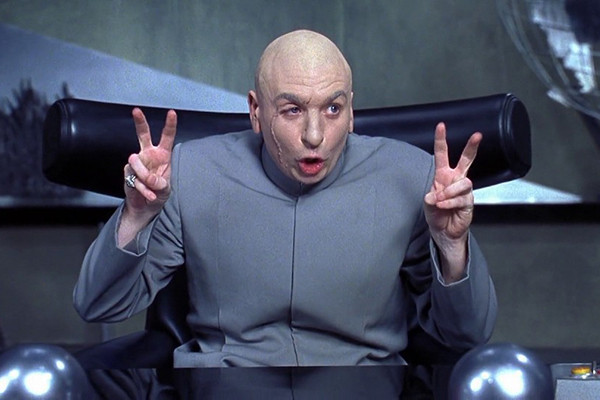 The humor of this film does work on a number of levels. The first is, of course, the James Bond parody aspect of it. It really is fantastic seeing Myers play Austin Powers a character designed to take all the ticks of James Bond and filter them through someone that is neither suave nor sophisticated. That's the big humor of the character, the fact that he's everything James Bond is not and yet he's still effective at getting the job done. This despite the fact that he doesn't change the way he looks, wanders around basically announcing, "I'm Austin Powers", and his enemies fail to stop him time and again. So, really, exactly like James Bond.

Dr. Evil, meanwhile, is the perfect send up of Blofeld and all the other James Bond villains from the past five decades. In design he's exactly like Blofeld, from the fluffy (at least at the start) cat to the baldness and the scar. But where the James Bond films kept Blofeld as a shadowy figure, someone that did evil because he could but hardly ever saw real development, this film makes his analogue into a fleshed out character. Like Powers he's goofy and weird, but he's also effective at being a ruthless psychopath. He's hilarious because of how over the top he is, pushing Blofeld just that one extra step further to find the true humor at the core of the character.

And then there's the fish out of water material. Both characters have to learn to adapt and change after three decades away. For Austin that means tempering his need to screw everything in sight. Dr. Evil, meanwhile, has to realize that the world doesn't need an evil leader running an evil empire. The most successful businesses, in fact, can be evil right out in the open. He's as much an anachronism as Austin, and there's so much the film is able to do with these characters just putting them in weird, more modern scenarios and letting them wander.

In fairness, not all the humor has aged that well. The worst is certainly the jokes about Austin thinking a woman is an agent of Dr. Evil, only to realize she's actually a man. It feels a little anti-trans, which I doubt was the intention at the time, but certainly if this movie were made today I'd expect these jokes wouldn't be in the film. There's also the fact that Austin is just a little too pushy around Miss Kensington, wanting to get in her pants and nearly forcing himself on her early on. The movie tempers that behavior pretty quickly, but the early scenes between them are cringy, too, making you wish this all played out just a little differently. 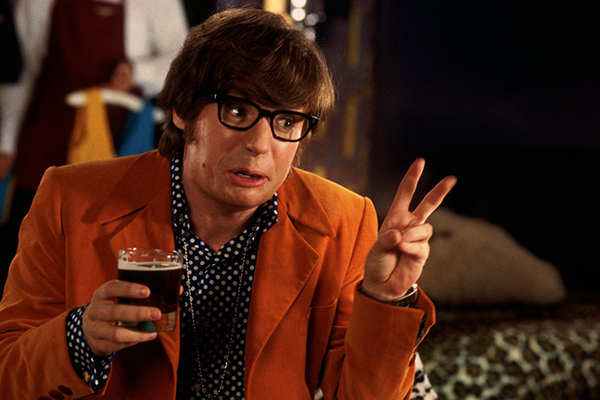 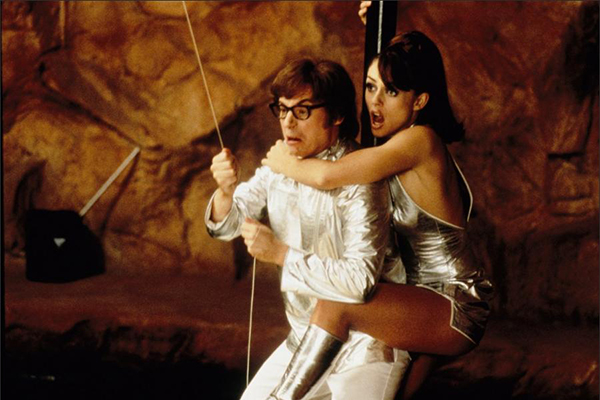 Still, on the whole I was amazed how well this film held up. I think maybe, for me, it played even better because I now had the knowledge of all the Bond films in my brain pan. I could see the various parody characters and situations they were aiming for, where certain things were plucked from previous films, almost like the films was turning to us and saying, "you see what we did there?" I liked that as it rewarded going through 24 films of the main series and carrying that knowledge with me.

But, as I noted, you don't have to have that depth of knowledge about the most famous international spy to enjoy this film. Even just having a passing idea of who James Bond is would be enough, and even without that there's still plenty of other humor that really plays. This is a fun and silly movie that just enjoys being itself (and occasionally turning to the camera for a wink and a nod). Sometimes you just want a comedy you can turn on while you kick back and, after all this time, Austin Powers: International Man of Mystery still delivers on that front.